I might be one of the few schmucks of my generation that, until recently, had only seen the original WICKER MAN that starred Christopher Lee and Ingrid Pitt, and not the vacuous, craptastic, incredible, life-changing Nicolas Cage remake from 2006. Now I can proudly claim that my eyes have beheld … Get hard 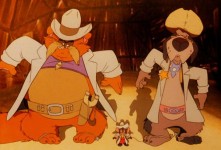 I fucking love MARY POPPINS. It got the lead spot in my Autobiography in Movies post that launched this site. When I first watched the film, like Michael, I realized I had to keep an eye on this one pretty early. “She’s tricky,” as he says. It’s so darn charming and … Get hard 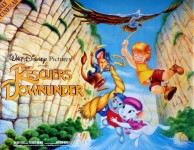 Thirteen years after THE RESCUERS, Disney produced their FIRST ANIMATED SEQUEL ever. So you have THE RESCUERS franchise and its success to thank for LADY & THE TRAMP 2, THE LION KING 2, BAMBI II, CINDERELLA 2 and the other wretched Disney sequels. But, to be sure: THE RESCUERS DOWN … Get hard

Alternate title: The “Commando” Drinking Game. Fuck you, asshole. Some people love their Disney and others love their Tarantino, but let’s be honest here, classic Arnold Schwarzenegger movies are the best. Especially if we’re talking movie drinking games! From quotable one-liners to ridiculous feats of strength, 80s Arnold flicks were … Get hard

For me, THE RESCUERS is a movie I had almost completely forgotten. I almost didn’t even think I had seen it until we popped it in over a few beers, and had that unnerving vague sense of deja vu over the entire proceedings. http://youtu.be/My7kP35acMQ After that brilliant opening number, “The Journey,” it … Get hard 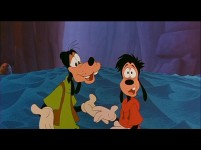 I’ve already delved into why A GOOFY MOVIE is one of the most important films of my childhood, and ever. So instead, I’ll talk about how I bastardized another one of my youthful favorites, when a group of friends watched the 1995 Disney classic A GOOFY MOVIE over far too … Get hard

The Asylum is an American studio and distributor that makes low budget, direct-to-video films. If you’re somehow ever confused when scrolling through your Netflix queue at similarly titled movies to well known blockbusters, you have The Asylum to thank. TRANSMORPHERS, JACK THE GIANT KILLER, ATLANTIC RIM, etc. Unsurprisingly, almost all … Get hard 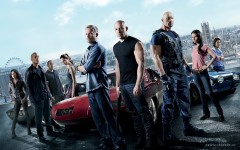 I’ll admit, I’m probably the wrong one to write any post on the FAST AND THE FURIOUS franchise. I watched the first one in the prime age of when I should love it (13-14), and didn’t really get it (though I appreciated the boobs). The only thing it did was … Get hard

The creature feature is one of life’s greatest and eternal pleasures, and thanks to director Mark L. Lester, come April 18th, we will have a movie that can be aptly described as JURASSIC PARK meets JAWS. It has the enviable tag line: “Half Dinosaur! Half Sea Monster! All Trouble!” and was born … Get hard