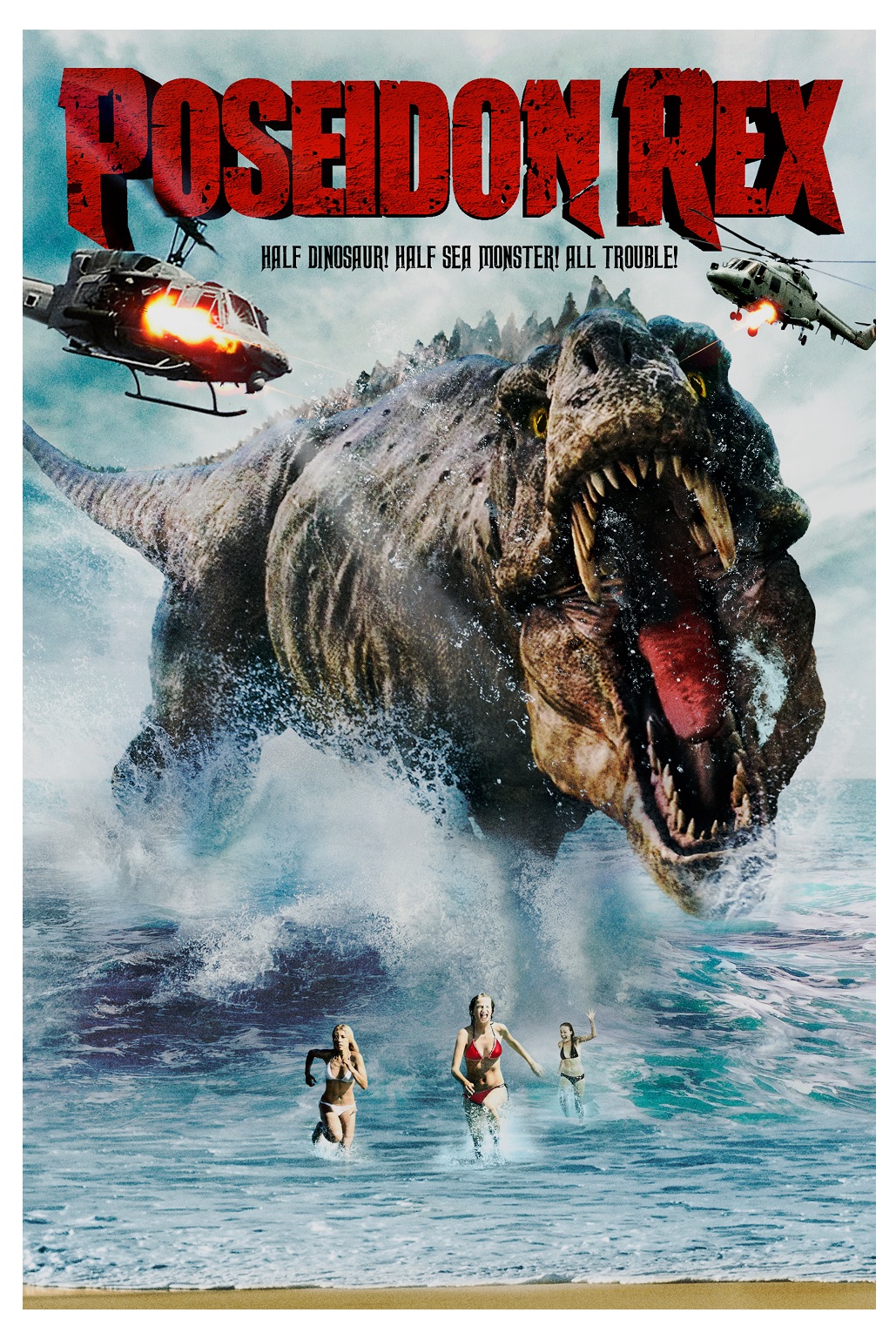 The creature feature is one of life’s greatest and eternal pleasures, and thanks to director Mark L. Lester, come April 18th, we will have a movie that can be aptly described as JURASSIC PARK meets JAWS. It has the enviable tag line: “Half Dinosaur! Half Sea Monster! All Trouble!” and was born to be turned into a drinking game.

Grizzled antihero badass (thus, his name) Jackson Slate (Brian Krause, or Leo from CHARMED) owes the Jamaican Godfather (or Tariq) a bunch of money, and plans to pay them back (probably) with a bunch of Mayan gold, apparently located on the bottom of the ocean by the mysterious “Blue Hole,” near an island off the coast of Belize.

They essentially blow up an underwater mountain to uncover the doubloons, but instead…wake up a long dormant hell-beast of the deep. Meet POSEIDON REX, or P-Rex, and thankfully, the action ramps up within moments. 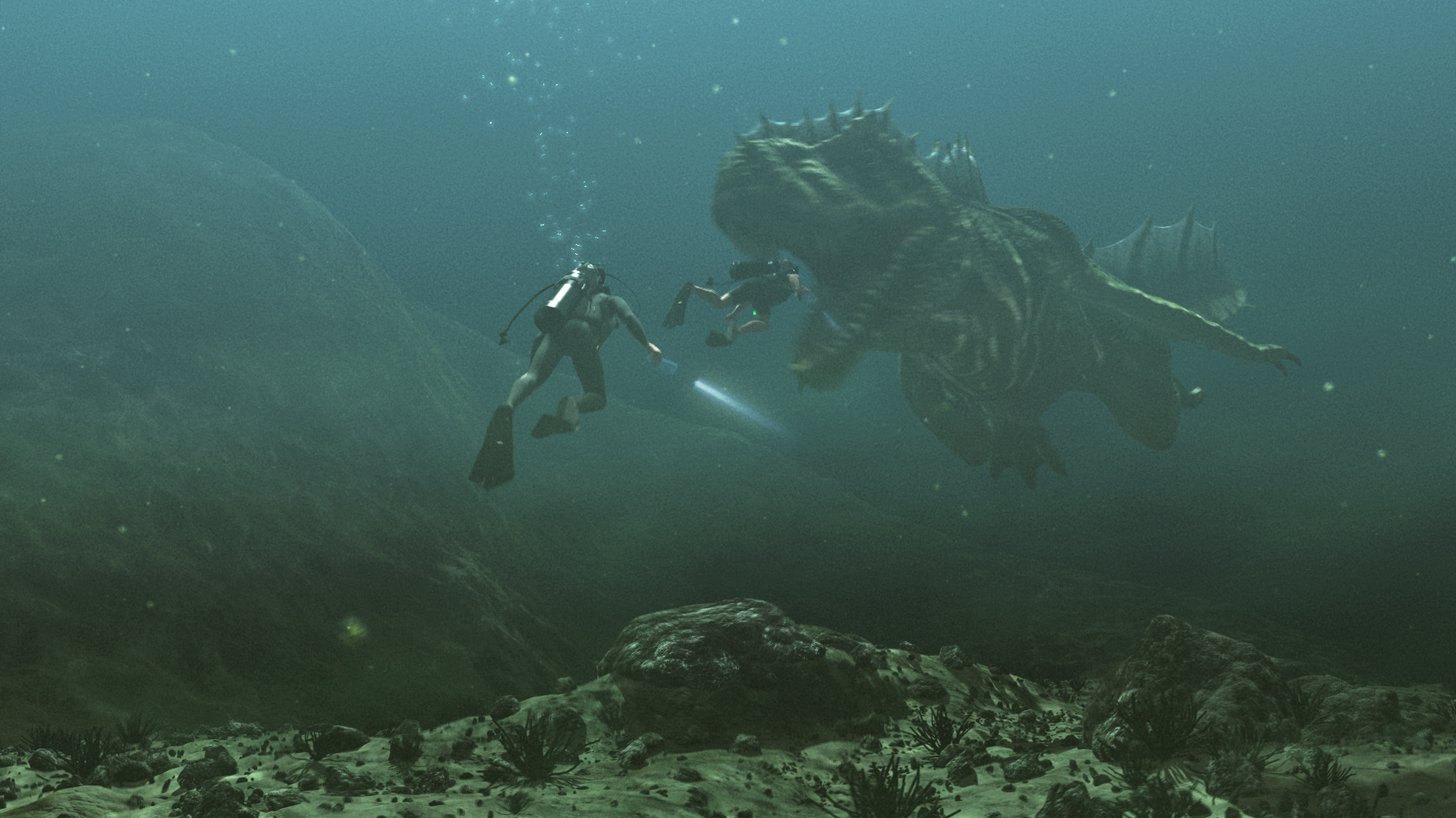 Jackson somehow survives the initial attack, and is found by a couple tourists (who happen to be a couple, Rod and Jane), bronzed and studly Henry (Berne Velasquez) and voluptuous marine biologist turned love interest Sarah (Anne McDaniels), who prefers to take off her shirt when she works.

Tarik, with his creepy damaged eye and gaudy Hawaiian shirt, receives shoulder massages in the shadows while smoking cigars, as his minions “search” for Jackson and their money.

Clearly, they will have bigger concerns…like a hulking, friggin’ dinosaur who can swim and run on land. It all comes together like a violent bro-high five, or a super strong alcoholic smoothie, as our baffled band of heroes team up with the Belize Coast Guard, AKA pirates, to take down the monster.

It doesn’t go too well: 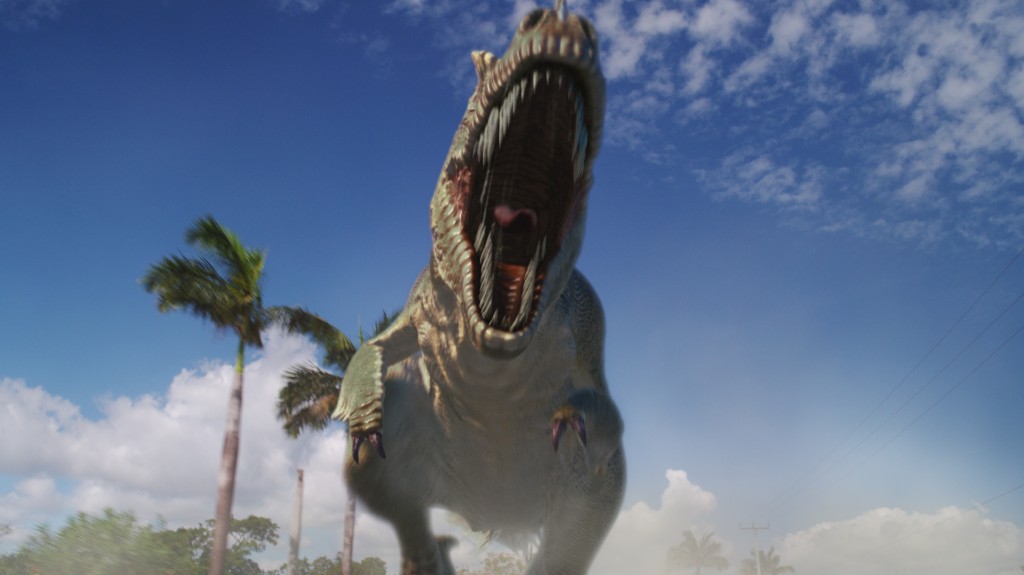 Remember: Drink responsibly, don’t drink and drive, and don’t take a boat out to sea near Belize for a few years.

1. Any time there’s a line referencing a swimming dinosaur, or that they’re extinct, or someone vaguely talks about “something in the water,” take a drink. Double it if a character mistakenly thinks THE MASSIVE SWIMMING DINOSAUR is something other than a P-Rex. 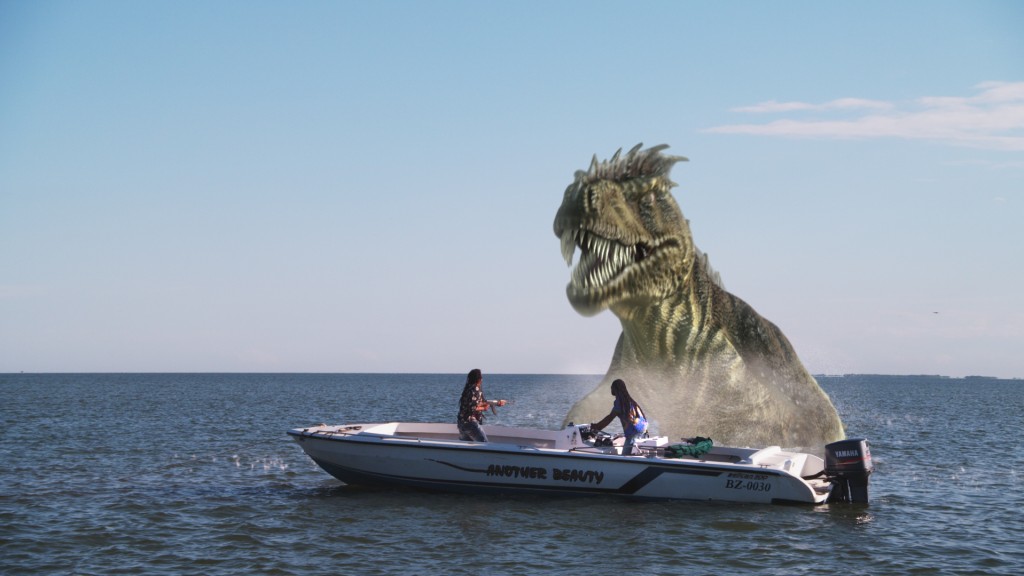 2. Drink every time a boat is attacked, or sunk. This happens quite frequently. 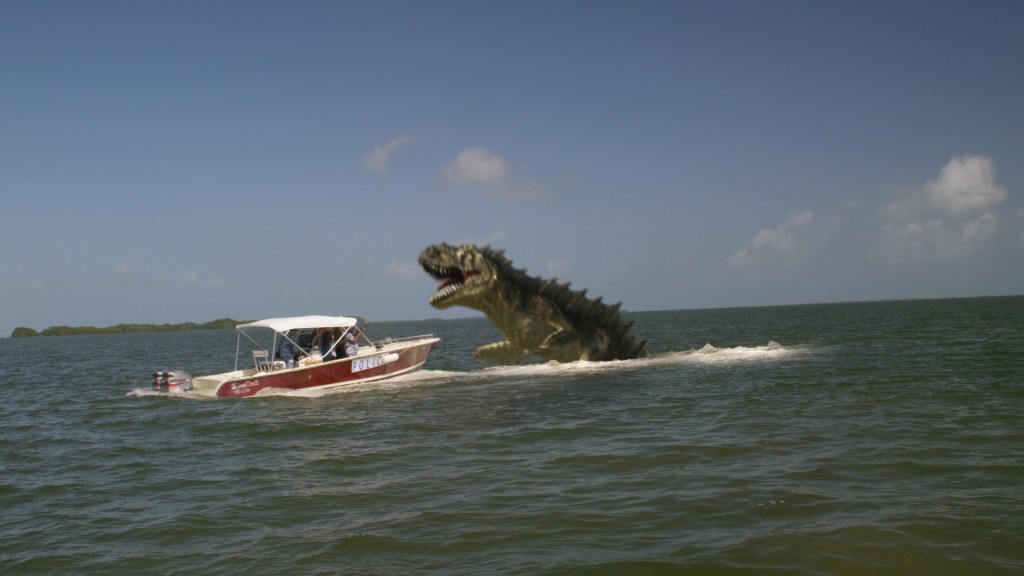 3. Drink whenever someone dies. This also happens quite frequently.

4. Have a sip for every unconvincing Jamaican accent. Mind you, the film takes place in Belize, but everyone in the Caribbean talks like a Jamaican.

5. Sip on your drink any time someone mentions the foreboding “blue hole.”

6. Every time the one song on the soundtrack, the ridiculous, hilarious and infuriatingly catchy tune “Come Te Llama” (from Mark Cyrus and Gary Young; I tried and failed to find it online) comes on, drink. 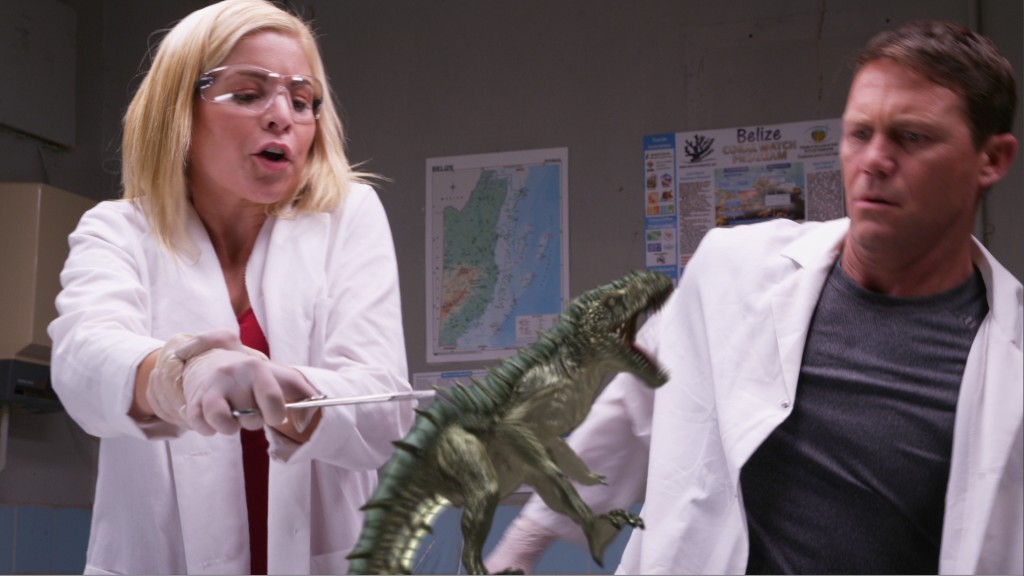 7. Drink for every incredulous/wacky reaction shot.

8. Whenever the P-Rex seemingly walks on water, take a drink. 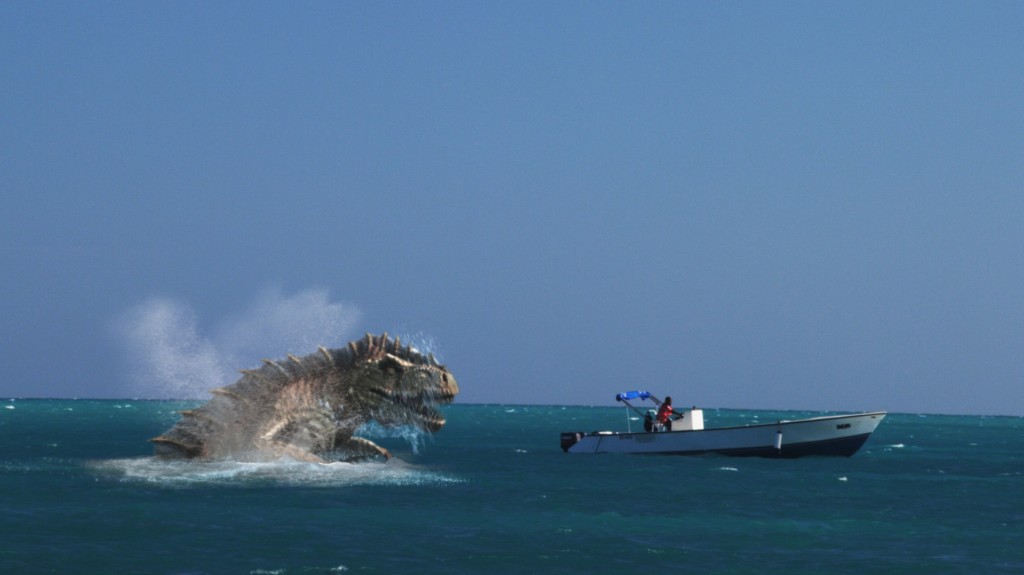 9. Every time Rod, the buff bro who abandons his girlfriend for treasure, is the worst, drink.

10. Drink every time we see a sonar device. Double it when sonar malfunctions, as it inevitably does. 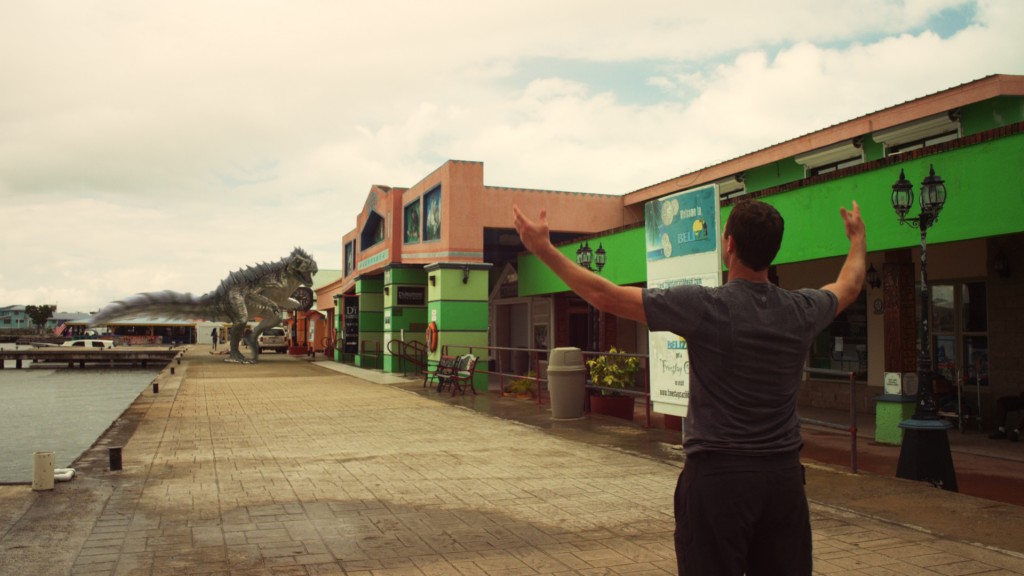 11. Drink whenever Jackson volunteers to “distract” the dinosaur like that’s a skill listed on his business card, and not the dumbest idea on the planet.

12. This one won’t make sense until you see it, but sip every time we see “the human binocular.” Several times in the movie one of Tariq’s henchman uses binoculars to try and find Jackson Slate. The henchman has a henchman, the aforementioned human binocular, who silently stands by his side, and tries to find Jackson by putting his hand on his brow like a moron. It’s incredible. 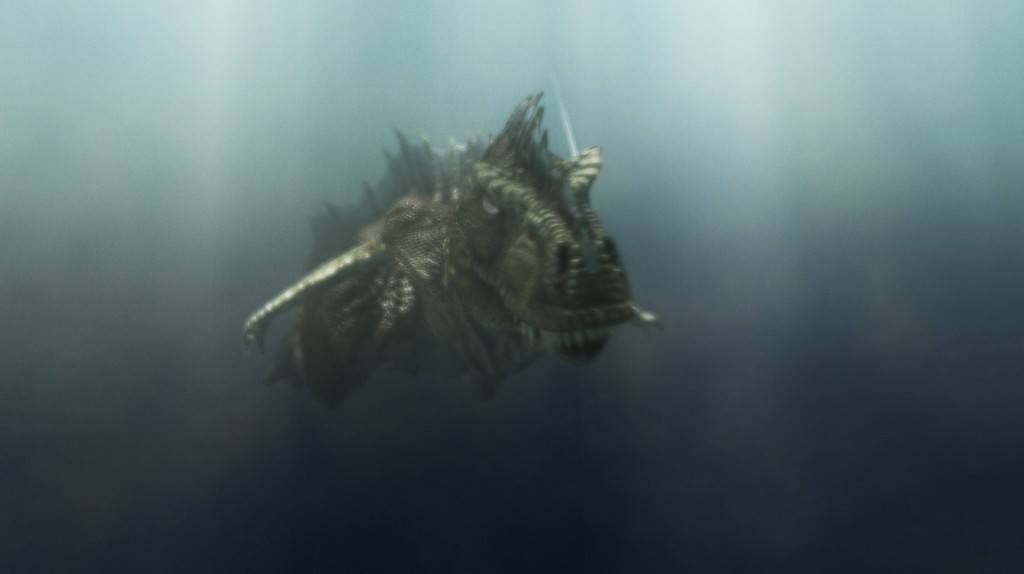 EXTREME SCUBA DIVER EDITION: Drink whenever someone talks under water while attached to a breathing apparatus. I don’t think this is possible.

Remember: Drink responsibly, don’t drink and drive, and don’t take a boat out to sea near Belize for a few years.

POSEIDON REX swims onto shore this Friday April 18th, arriving in theaters and on VOD.