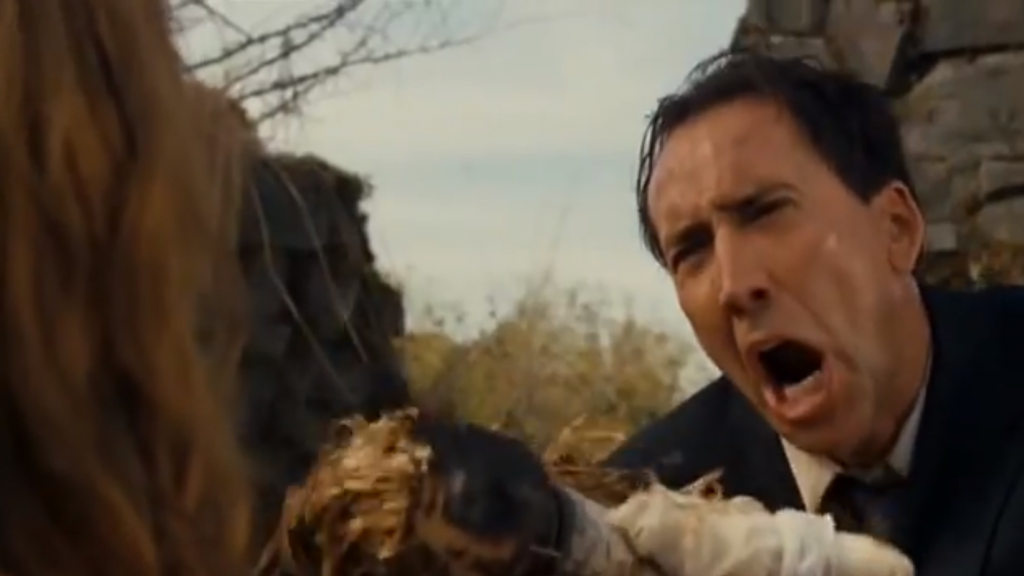 I might be one of the few schmucks of my generation that, until recently, had only seen the original WICKER MAN that starred Christopher Lee and Ingrid Pitt, and not the vacuous, craptastic, incredible, life-changing Nicolas Cage remake from 2006.

Now I can proudly claim that my eyes have beheld both masterpieces, and somehow lived to tell the tale, thanks to a hilarious Doug Benson Movie Interruption at The Cinefamily in Fairfax. Tonight he’s doing GODZILLA, if you’re interested.

It’s nigh impossible to form a coherent thought about THE WICKER MAN, but then again, there isn’t a coherent moment in the entire film that ranks in the Hall of Fame of awful, alongside THE ROOM and Lou Diamond Phillips’ filmography. 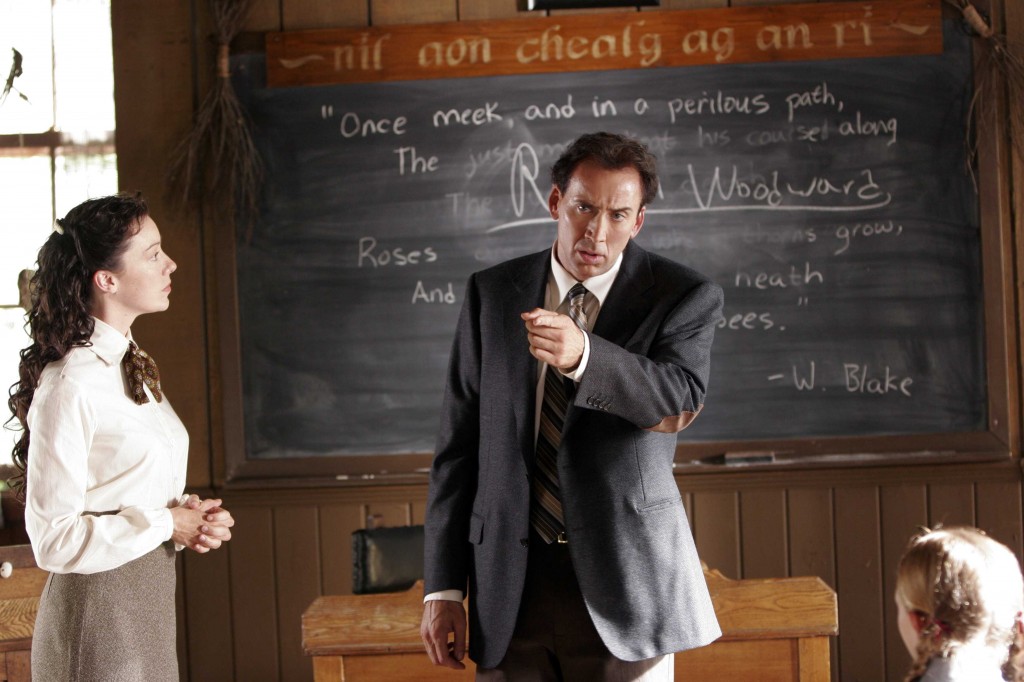 Nicolas Cage (I’m not even going to bother with his “character” name) is an LA cop who gets a letter from his ex-girlfriend, telling him about her daughter’s disappearance from Summerisle island, a fake cult island in the Pacific Northwest. If it existed, I would totally have visited during my upbringing, and never would’ve been the same, probably because there are no boys on the island. Also, before this letter, Nic watches as a semi just obliterates a car with a mother and her indignant pissant daughter inside, a nonsensical “plot point” we’ll be reminded about several times throughout the movie (I smell a drinking game rule). Here’s that immortal scene:

What’s even crazier about this movie is how generally close it hews to the original movie, which is rightfully hailed as a horror classic, thanks to its score, awesome twist ending, the aforementioned Christopher Lee as the eerie, cross-dressing Lord Summerisle, and Bond girl Britt Ekland humping walls naked. You can read my review of it here. Yet, this WICKER MAN is a classic awful movie, that adds some baby drama (Cage is the father of the missing girl!) and the aforementioned car crash, subtracts any and all poignant imagery/metaphor (religion, sex), and replaces it with bees, women punching and gibberish.

There’s also Ellen Burstyn, DEADWOOD’s Molly Parker, AMERICAN HORROR STORY’s Frances Conroy and 90’s “ingenue” Leelee Sobieski, all in the worst movies they’ve ever been apart of, a claim that Nicolas Cage would scoff at, seeing as he likely has 23 other films that jockey with WICKER MAN for that title. Until the Cageback takes America by storm (and it will, unless the Wesley Wevival intercedes), we can continue to revel in the wonder, majesty, mystery that is Nicolas Cage’s career. 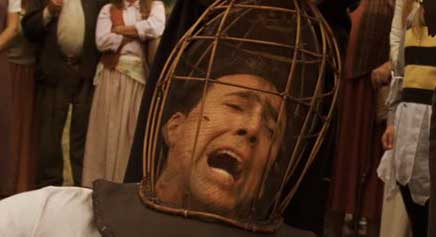 1. The “Not the Bees!” scene in WICKER MAN has rightfully become an internet phenomenon, and it should be rewarded with a drink any time there’s a scene involving bees. The infamous scene is actually from the Director’s Cut on the DVD or something, but revel in its insanity here:

That is so fucked up. Also, it spoils the movie, but whatever. WICKER MAN is un-spoilable.

2. Every time Nicolas Cage opens a drawer, drink. When you were about 4 years old and pretending to be a detective, opening drawers is how you’d look for clues. This is how Nicolas Cage looks for clues in this movie. There’s one particular scene that might kill you.

3. A subset of the above rule is that whenever Nicolas Cage ignores absolutely, mind-numbingly obvious clues, you must drink.

4. Any time that Nicolas Cage utters gibberish, take a sip.

5. Drink when Nicolas Cage puts on a bear costume.

6. Drink for every semi-steamrolling flashback.

7. Waterfall for however long Nicolas Cage rides a bike.

8. Take a lusty pull from your beverage any time that Nicolas Cage hits a woman. Finish your beer for this moment that combines rules #5 and #7: