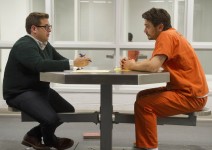 When you’re describing a movie that stars Jonah Hill and James Franco, your mind automatically goes to Knocked Up or This is the End. As you watch True Story, you’ll be mostly wishing you were watching either one of those. You get the overwhelming sense that Jonah Hill wants you … Get hard

In 2010, Dreamworks’ How to Train Your Dragon came out and charmed everyone in theaters, young and old alike. The film was adapted from Cressida Cowell’s book, and featured a sterling voice cast headlined by Jay Baruchel (This Is The End), Gerard Butler (300), Christopher Mintz-Plasse (SuperBad) and Kristen Wiig (Bridesmaids). Now four years later, … Get hard

Don’t run away. This isn’t another in a long line of Oscars prediction columns where we pretend we know the bizarre criteria in which voters select winners (I like to think it somehow involves the infallible logic, belied by the weights & pulley system, found in Monty Python). No, this … Get hard