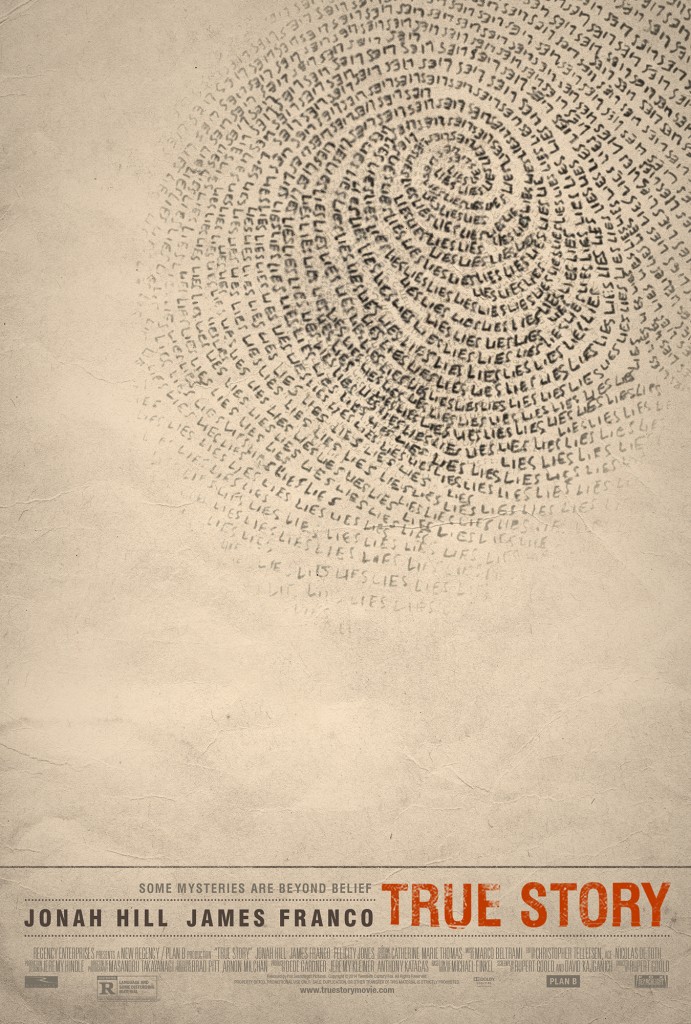 When you’re describing a movie that stars Jonah Hill and James Franco, your mind automatically goes to Knocked Up or This is the End. As you watch True Story, you’ll be mostly wishing you were watching either one of those. You get the overwhelming sense that Jonah Hill wants you to forget his roots, while James Franco doesn’t give a $#*!.

True Story is unsurprisingly, based on actual events, adapted from Michael Finkel’s memoir by writer-director Rupert Goold. It’s one of those fascinating stories that is way better in real life than on screen, because True Story seems played out from the opening frame. 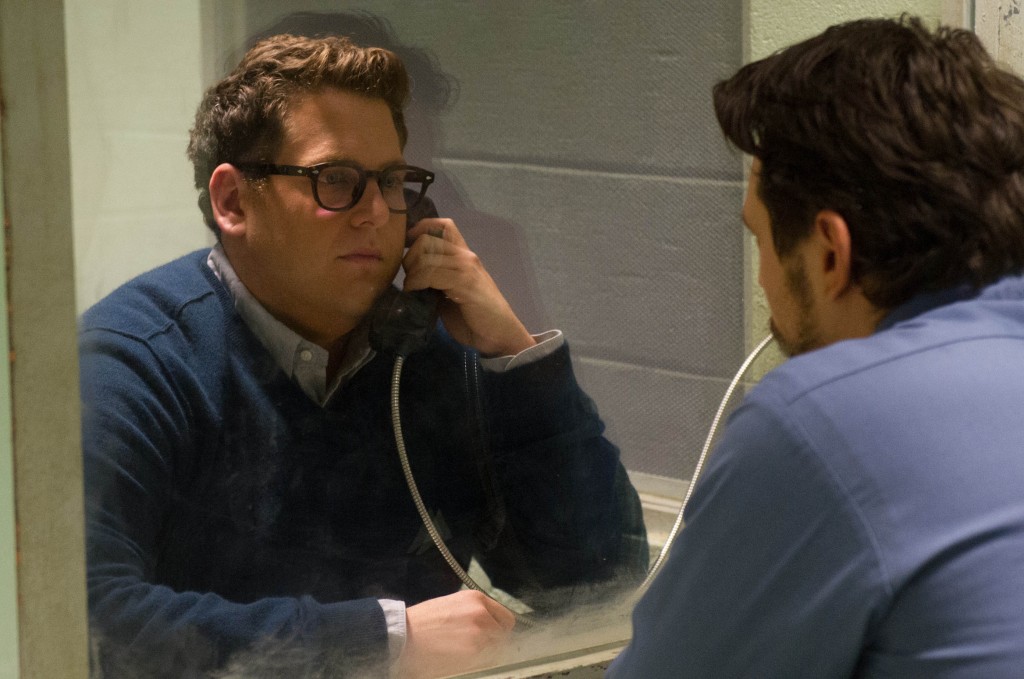 Michael Finkel (Jonah Hill) is a stud New York Times reporter, and as cocky as you’d expect someone to be who has locked down 10 covers in three years (“not that I’m counting”). He beats last-minute deadlines while bluffing his way through an office poker game and continually ignores his wife when his wife is Felicity Jones. As a repeatedly ignored, wasted character, I almost feel worse for Jones’ Jill than Christian Longo’s murdered family members.

When Finkel’s called into the office to talk about his newest cover story, a profile on an abused cocoa farmer, Finkel’s dreaming of something that rhymes with “schmulitzer,” but the audience is blissfully prepared for some righteous comeuppance. And it comes: his article has holes, the facts don’t check out, and it’s clear that Finkel combined various people into one for the benefit of his article. And just like that, Finkel’s out of a job and banished back to his beautiful home and beautiful wife in beautiful Bozeman Montana, where he desperately rifles through his contacts in search for his next story and comeback. 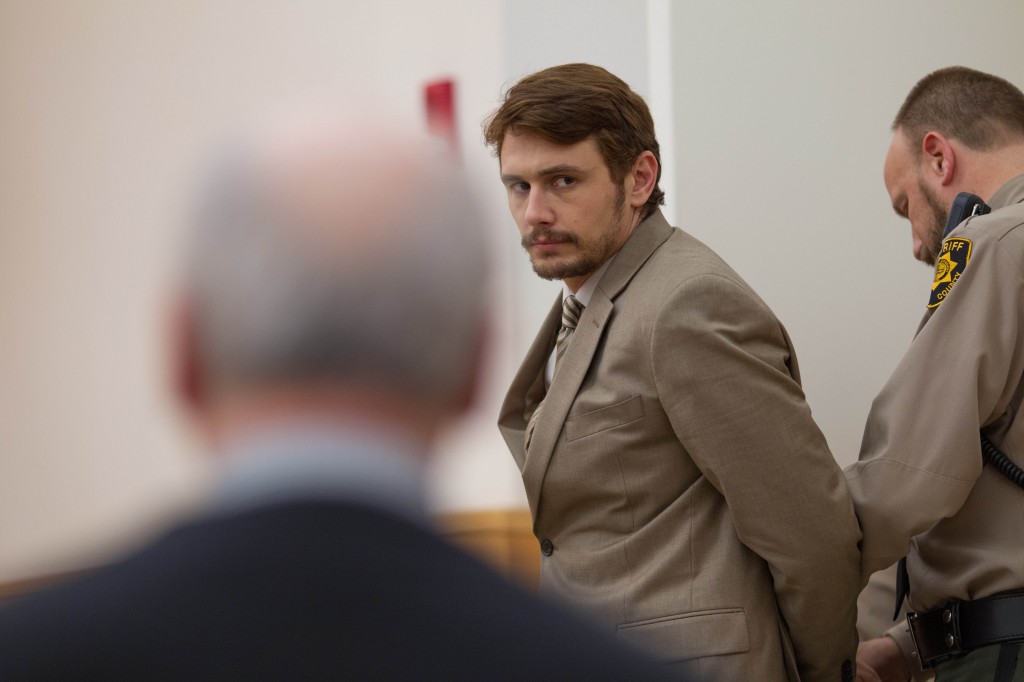 Christian Longo (Franco) is a man accused of murdering his wife and kids. When he’s caught, he refers to himself as Mike Finkel, news that tickles the real Finkel. It’s hard to make a guy more unlikable than a dude who probably killed his entire family, but that’s kind of where we’re at, when Finkel, who cares so much about his name, his reputation, and wanting to be liked, that he writes to Christian Longo that he’s “honored” that the man who’s accused of drowning his wife and kids would take his name (“When you had my name, they took mine.”) The movie is full of ham-fisted lines befitting a Lifetime Movie: “I thought you could tell me what it’s like to be me.”

It’s obvious to everyone but Finkel that Longo did it, but Longo manipulates him easily, professing to be a long-time fan. Longo wants to write, and in exchange for Finkel’s tutelage, offers him exclusive rights to his story. Quite quickly, Finkel’s envisaging a bestseller, and sells it to HarperCollins, which we know won’t end well. 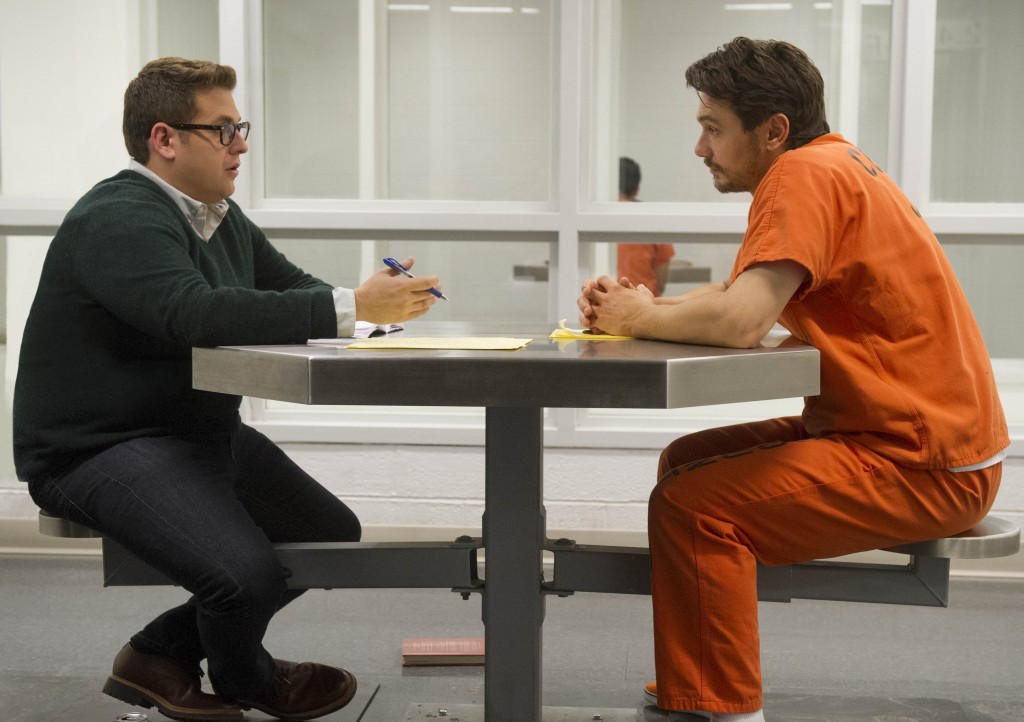 Neither actor is able to wade away from the heavy handed nature of the script, or escape the considerable baggage of their personas. Jonah Hill is saddled with an unlikable character without an arc or redeeming qualities, and the movie isn’t good enough to survive that. Franco is better as Longo, but you want more. Thanks to his dead and glazed over eyes, Longo is creepy, but mostly he just looks like he needs a nap. I wish the roles were reversed; I’d love to see Jonah Hill play a deceptively charming family killer, and to see Franco enlivened as a journalism desperately seeking a second chance.

Even scenes of mild catharsis, such as when Jill comes by to visit Chris (because everybody can meet this guy) and starts screaming at Chris, are flattened by the dialogue: “If he can understand you, he can understand himself.” There are far too many lines that feel lifted from the movie’s poster:  “Everybody deserves their story told,” Finkel believes. “Don’t you see this as a second chance?” Finkel begs his wife, highlighting with permanent marker the themes of the movie for the audience.

At one point, a cop refuses Finkel’s evidence because Jonah Hill’s character no longer has any credibility. By this point, neither does the movie.

There is a compelling relationship in this movie, but in many ways, it starts where it should begin. In real life, Finkel and Longo still speak regularly, which is fascinating to me, considering Longo played him for a fool, and pretty much sunk his writing career. In many ways, he did become Finkel: Longo has been published in The New York Times from Death Row, and Finkel hasn’t since his justifiable firing. True Story is based on events that scream movie.  The adaptation feels like it’s screaming at you that it is a movie.