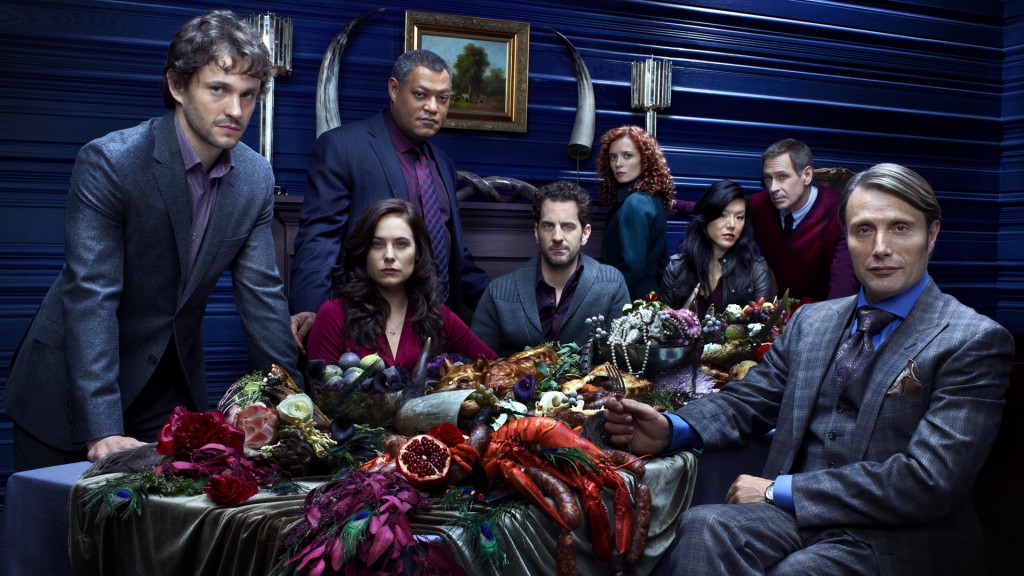 Why is anybody leaving the room right now? NBC’s Hannibal is part of the holy triumvirate of TV shows right now (Orphan Black and Game of Thrones complete the trifecta).

We get a recap of Hannibal, and the video just gave me goosebumps. SO GOOD. And it has a glimpse of season 3: Hannibal on a plane, sipping champagne WITH Gillian Anderson/Dr. Bedelia du Maurer. WHAT?! [Ed. Note: This was apparently the end of the season finale…meaning I’m an idiot]

But we get a video from Mads, who’s in Denmark. Hopefully will be in town next year for a quick lunch.

Hugh Dancy has a mustache, in Australia right now, shooting from his cell phone I’d guess. Dancy wants to know what’s going to happen just as much as we do; wants to know if there is any credence to Jimmy Price quitting the service to become Jack’s personal butler. “If Bryan is not yet wearing a flower crown…will someone give him one?”

Fuller: “There’s somebody here right now, who shouldn’t be here right now, because they got shot in the face. Please welcome…Raul Esparza.” That’s Frederick Chilton, who apparently is a big part of season 3, despite being dead (presumably).

Raul loves playing the part because he’s a douchebag, and “Fullerisms” all over the place in his dialogue. “I was surprised as anybody that I got shot in the face.” Wants to come back with an eye patch, hump and parrot.

Eddie Izzard will be returning as a flashback…we’ll be seeing more than just his limbs being eaten.

There are a lot of new characters coming in Season 3 from Thomas Harris’ books. Lady Murasaki, Commander Pazzi and Francis Dolarhyde (coming in episode 8 of season 3). Francis’ arrival starts the tale of Red Dragon, something that will start at the end of season 3 and into season 4 (assuming we get there; WATCH THIS SHOW). Around then is when Silence of the Lambs comes into play, which is why Clarice Starling is brought up.

Can we expect her in the future? Martha DeLaurentiis long-windedly explains that they don’t have the rights to it (MGM does), but they’re trying to work with them to make that happen. Apparently MGM had a Clarice show in development when Hannibal started, so they’re not exactly happy, something that doesn’t bode well. But, I don’t doubt Fuller will make it work, because he’s a genius.

How free are they to deviate from the book? They basically follow the story in the writer’s room, and becomes a sort of mash up of the novels, that they then write for the actors. When they got Michael Pitt as Mason Verger, they tailored the character to what he was doing with it. Michael Pitt was PHENOMENAL last season by the way.

Fuller is hoping to get the rights for Clarice and Silence-stuff, because he wants a completion of the story.

How did Alana Bloom not see Hannibal’s darker side? Caroline argues that he was her rock, that she knew him longer than any of these other characters, and she trusted him. Also, it doesn’t hurt that he’s Mads Mikkelsen/hot (in a Danish/creepy way).

Scott Thompson, who comes from Kids in the Hall, so he knows his shit, argues that it’s a lot easier to be funny on a drama, especially on a show that needs lightening.

So, crazy enough Dr. Chilton is coming back, despite getting shot in the face. He is not dead, and Raul knew he wasn’t, because he read the books and Dr. Chilton survives. He trusts Bryan Fuller implicitly (carried over from Pushing Daisies) and has been very kind to him. Also, I didn’t realize how much of a fan favorite Raul Esparza was until this panel.

David Slade, the director of the pilot and the creator of the “look” of the show, also directed the season 2 finale. Apparently the crazy bloody climax was shot multiple times in complete takes all the way through, which sounds incredibly emotionally draining.

Favorite deaths? Raul: the angel in season 1. Aaron: the baby horse uterus person (or “Turducken,” as it was referred to in the writer’s room). Scott: mushroom death. Caroline: tree person. Steve: totem pole. Martha: eye of god in season 2. Bryan: the cello death, but also loves Mason Verger eating himself.

Slade has gotten better at cooking from this show, which might mean he’s a serial killer.

Will and Hannibal have a genuine love for each other.

Who is Bryan most excited about introducing? Mursaki. Barney was name-dropped in the character, but he was a Silence character, so the rights issue still applies.

Anime was an influence on the show’s style. David Cronenberg, David Lynch and obviously Slade were their cinematic influences.

What’s upcoming for the Sassy Scientists? Abrams promises a spinoff in development, where they fish in a small town, and can’t get out of trouble. It’s called Catch of the Day, and would be awful, he says. We’d all watch it.

Will we know more of Will’s dogs names? Apparently they look to Twitter for inspiration, so tweet @ Hannibal to name a dog on TV. That’s most definitely the dream.

What’s the cuisine for season 3? Italian. Which is a clue as to where Hannibal’s headed while on the run.

Is a Pushing Daisies musical coming, or will music happen on Hannibal? Fuller would love to do a surreal musical in Hannibal’s mind palace, a la Christopher Walken in Weapon of Choice. Apparently Mads can dance/do everything.

If you were eaten, what dish would you want to be served in (a question only asked at Hannibal)? Steve: Raw. Scott: with your fingers. Aaron: Pie. (Scott intones that Aaron is obviously a tiramisu). Caroline: some kind of dessert. Esparza: roast pork, luau style.

Margo and Will’s mirrored scars were intentional, because there’s no accidents on Hannibal. There’s symbolism on top of symbolism, on a platter of more symbolism that looks tasty enough to eat.

The first half season of Season 3 is light on the FBI stuff (see the HQ once in the first 7 episodes, which doesn’t really bode well for Aaron/Scott), and will focus on the pursuit of Hannibal.

When someone comes to ask a question wearing a Dr. Chilton mask, Raul admits that “this is the greatest day of my life.”

3rd season starts one year after the events of season 2, because they want to be vague about who survives, and wanted to land the characters where they’re active (and not in hospitals). The first episode of the 3rd season is like a pilot for a new show starring Hannibal and Dr. Bedelia. They’re telling the story emotionally, not temporally.

Kacey Rohl (Abigail Hobbs) will be a part of season 3. Fuller admits it’d be interesting to see where she was during season 2.

Fuller tries not to think about gender when writing characters, something that deservedly met a ton of applause.

The panel ended with a stellar snippet from the Hannibal blooper reel, because these murderers and sociopaths actually have a sense of humor.