SDCC: “Under the Dome” Panel 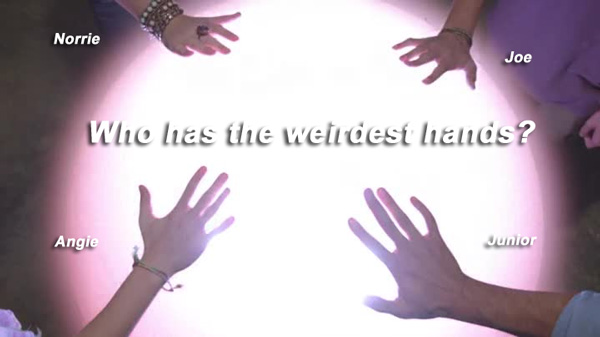 Next up: CBS’ Under the Dome, a show that could’ve been a truly fantastic mini series, and instead is being turned into a frustrating, infuriating, dragged out, bloated Lost-y mind bender. Maybe Stephen King will show up (he won’t). Maybe Brian K. Vaughan can reveal that CBS is the reason the show only shows 1/millionth of his talent (he won’t).

As expected, neither of those things happened. Vaughan wasn’t mentioned, and King was akin to the creepy specter watching over UTD and this panel, constantly mentioned, lauded, and feared.

Executive Producer Neal Baer held court, along with stars Mike Vogel, Rachelle Lefevre, Dean Norris (HANK), Alexander Koch, Eddie Cahill (Tag from Friends, people) and Colin Ford (according to moderator/mood killer Kevin Frazier, the “ladies man of Chester’s Mill”). Big props to Lefevre and Koch, who got into the Cosplay. Lefevre dressed up as Starbuck; a redhead in a blonde wig: hot/wrong. Koch was Daryl Dixon. It felt like their agents told them two palatable/friendly Con choices and they followed suit, but it was clear Lefevre had done her research, ending the festivities by saying “So say we all.” Since I’m that tired, I’m tempted to use that as an exit for this post, but I’ll press on, like Under the Dome threatens to do to our summer TV for years to come.

Apparently Under the Dome was the highest rated summer show in 21 years, a statistic that screamed of BS Nielsen rearranging. I’m sure it has gangbuster ratings for 34 year old’s in the midwest with butterfly tattoos.

Instead of, a full episode (thanks for nothing/little), we got two clips from Episode 7 of the show. There have been four episodes so far in season 2, which means we have three episodes of filler/little consequence. Or at least, that’s my assumption, and those are always worth trusting.

-In one, apparently Rebecca/World’s Greatest Elementary School Science Teacher/Psychopath lies to Big Jim in the coming episodes, and “crosses” him, something that involves Barbie. This does not sit well with Big Jim, as he looks as evil and mad as we’ve ever seen him on the show, something that we’re told we love. And they’re right: Dean Norris is the best, and we want to see him furious. He threatens Rebecca, staring her down into a corner, perhaps her death forthcoming.

-The next involves Rebecca (…yay), Julia and Barbie, spelunking in tunnels, as one does in Chester’s Mill. Apparently these tunnels have big implications in the coming season. The cave has a gigantic hole with only black/darkness below, so naturally Barbie investigates. He’s tugged in by an unseen force, Julia and Rebecca try to hold him up, but Barbie heroically/stupidly cuts the rope, sending him throttling to the depths of…nothing? It’s an apt metaphor for the entire Under the Dome experience. Did Barbie fall to his death? Of course not. Instead, it appears that perhaps he escaped the dome….but again, that’s me connecting dots.

Neal Baer is entirely too proud of the fact that you “never know” when someone’s gonna go/die, also proud that people could come back from the dead. Not literally, but as an avatar (non-James Cameron division), a la Dodee. There’s a possibility that characters that have died recently (Angie, Linda, everyone we care about) might come back in this fashion if they want the paycheck.

Frazier practically opens the panel with the mind-numbing question: “Are we closer to getting out of the dome?” The show is called Under the Dome; when that happens, the show is over. But, apparently one character is going to get out of the dome this season (thus my dot connecting with Barbie earlier; snoogans).

When newcomer Eddie Cahill, who plays Sam Drunk/Serial Killer, reads scripts and sees people die, he comments “better him than me.” He said it like a joke (they’re a “good group of people”), but I guarantee that’s what they’re all thinking. They don’t want to have to go to Lifetime (though admittedly, they throw great parties).

We will see what Angie saw before she died (or what’s in that locker besides emptiness/a 1988 time vortex). They acted like we didn’t know the killer…but it seems pretty obvious that Sam did it, based on his Angie scratch and insanity cliffhanger from last week.

Will Junior and Big Jim reconnect? Well, the answer is doubtful, because they’re both psychopaths, as Dean and Alexander both admit to, cautiously. It’s hard to raise a psychopath, Dean said, but…he’s a big reason in creating said psychopath.

How did Barbie go from KILLING Julia’s husband to being her love interest? “He’s smooth,” Vogel intonates. He’s also the lead on the show and too attractive.

What’s next for Joe McAllister? Colin mentions that this season is his journey from young man to adult, which is pretty good for a high school student. Joe looks up to Barbie as a role model, taking after his heroic behavior/bravery. He also has a knack for love triangles, much like Barbie.

Did you know that nobody knew who Alexander Koch was before Under the Dome and now people sneak photos of him on airplanes? Yes, being a TV star changes your life, apparently. Huh.

I guess I’m obligated to promote houndsofdiana.com, a “digital character” we met recently when Joe got a brief dose of WIFI, something I can relate to while toiling around the various convention rooms at SDCC. The site features tweets, vague videos and other marketing material, and…will have fun vlogs with Norrie and Joe, showing the lighter side of Chester’s Mill. That pitch sounds infinitely more pleasant than the show (I also kinda like this show, but I’m hungover and sarcastic).

How important is Stephen King’s involvement? Well, they can’t say otherwise, but it’s “great to know he’s got a voice” in the making of the show, and helps guide the show. He apparently “scares the crap out of you,” because it’s Stephen King.

Neal Baer had 5 seasons planned when they started, which I call BS, or call it poor planning, since it doesn’t seem like they know where they’re going. The tunnels are a big development, he says, which I assume will be an exciting thing to say when we discover said tunnels.

Rachelle is happy that Julia is now active and taking charge, two traits that are more like her, because she’s not restrained. She calls herself a “reluctant leader,” as the lines are drawn between Jim and Julia in coming episodes.

They finished filming the show on Friday. Last Friday.

We’re going to meet Barbie’s father. Again: more evidence that he gets out from under that pesky dome. Apparently he was a trust fund baby…with other familial secrets still to come. Riveting.

In coming episodes, we’ll see the outside world’s reaction to the dome, according to Lefevre. This is legitimately cool, and something I’d be interested to see. It wasn’t addressed at all in King’s tome, and think it’s a POV that could bring ripe fruit.

What’s Junior’s priority: finding Angie’s killer or finding his Mom? That’s tough to say, Koch mutters, but says Angie is #1 because, well, he can’t really get out of the dome to find his Mom. Yet.

Will Junior get reprimanded for his harsh treatment of Angie? Koch promises more misfortune coming for Junior. Good.

If the cast was under the dome in real life, what one person would they want with them? Ford made everyone go awww/love him, by saying his buddy Garrett (“I love you dude”), Cahill said his wife and kid, Alex says Dean, Dean says Britney Spears (because he’s a comedian), Rachelle says Clive Owen, and Mike Vogel is on point: Chuck Norris. Neal says CBS, because he’s the embodiment of everything I hate.

Someone asks Rachelle to say a line from Twilight, a franchise she got booted from. She says “I’m the one with a wicked curveball,” and the whole ballroom didn’t erupt in flames, so there’s that.

Under the Dome is a parable for our times, by the way.

Is Joe gonna mack on 1988 chick? Norrie was/is his first love, and you can’t run from your first love. Again, awww.

More on King’s involvement: he wrote the season 2 premiere to help focus the next season and set the groundwork. He apparently loves when they kill characters, and Neal said he was very happy with season 2 because of it. This means more people die. There’s also an assumption that death = good TV, which is a misnomer/mistake. Also, apparently Amblin TV and Steven Spielberg are very hands on with the show. Spielberg, Stephen King and CBS = excessive mediocrity/too many cooks in the kitchen.

Apparently King is impish and “disturbingly normal.” I like Vogel’s dry sense of humor and his beard. I also liked when this panel was over, but not when we were rewarded with a “special” Extant teaser.