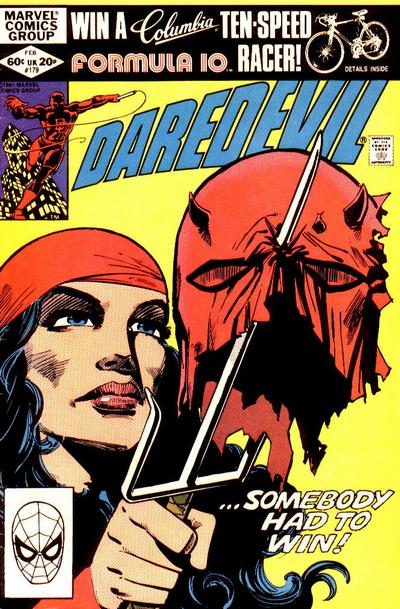 We’re only days away from the newest addition to the Marvel Cinematic Universe, with Daredevil set to debut on Netflix this Friday. The show promises to be a dark and gritty look at the origins of everyone’s favorite blind superhero, and we’re all very excited about it here. So excited that I’m declaring this week to be Daredevil Week! Starting today, I’ll be doing a series of DD posts to start getting you all excited for the newest adaptation of the character, with a heavy and spoiler-light emphasis on the legendary run of Frank Miller that helped inspire the new show. This post will feature brief(ish) looks at Vol. 1 and Vol. 2 of Miller’s collected DD work. Tomorrow, we’ll move to Vol. 3 and the Born Again TPB. Thursday, it’s a double look at DD’s origins, with Miller’s Man Without Fear and Daredevil: Yellow by Jeph Loeb and Tim Sale. We’ll finish it up Friday with the return of Superhero Movie Guidebook, which will reevaluate the first big attempt at a live-action Matt Murdock, 2003’s Daredevil.

Now you may be wondering, why is “Daredevil Week” starting on a Tuesday? That’s because, of course, I’m doing an intentional homage to the longstanding comics tradition that Daredevil himself never works on Mondays. Sure, you could look that up to double-check me, or you could just look at this image for irrefutable proof: an exclusive excerpt from the 1980 crossover between Daredevil and Garfield the cat: 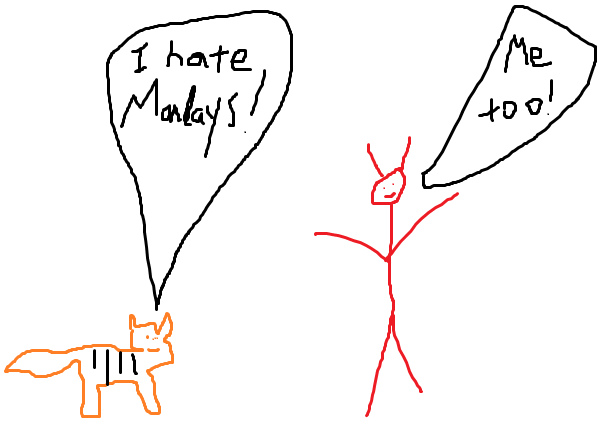 So, let’s dive into the work of Frank Miller, an important figure in comic book history, as Miller became one of the first superstar artists to also become a superstar writer, and played a big role in the growing maturity and darkness of comics in the 1980s. In 1979, he began drawing Daredevil, later taking over as writer too in a run that’s still regarded as an all-time great (finishing #7 in Comic Book Resources’ Top 100 list). His collected DD works of the 1980s and early 1990s are broken into five volumes. Vol. 1 collects Peter Parker, Spider-Man #27-28, and Daredevil #158-161, 163-172.

Most of the issues in this first volume are only drawn by Miller; not coincidentally, most of the issues in Vol. 1 are pretty bad despite wonderful art. Miller’s first foray into drawing DD was when Daredevil guest starred in a two-part Spidey story where Peter loses his eyesight. It’s not good. Then Miller takes over Daredevil, drawing the scripts of writer Roger McKenzie. Which are also not good. They feature an uninspired romance with Black Widow that fizzles out, a decent issue with the Hulk guest starring (which is more of a Hulk story than DD story), and Foggy Nelson getting married; if you’d think the main member of DD’s supporting cast getting married would be treated as a big deal, then you’d be wrong — the wedding is scrunched into a couple panels at the end of an issue. The highlight of McKenzie’s tenure was probably the prestige role given to Daily Bugle reporter Ben Urich, who successfully deduces that Matt Murdock is Daredevil, gets him to admit it, then burns the story for the good of the people. The lowlight is the “Marked for Death” storyline, in which Bullseye and Daredevil eventually have a showdown at a carnival, where DD makes Bullseye put a gun to DD’s head and dares him to shoot, but Bullseye is too afraid to do so. Basically, Daredevil’s arch-nemesis is reduced to a literal crybaby.

Miller hated McKenzie’s writing too, according to then-EIC Jim Shooter, so much so that he almost quit the book. Shooter talked him out of it, and soon gave him writing duties as well, starting with issue #168. The turnaround was quick and stunning. Miller’s very first issue as the writer introduced Elektra, the character who would come to define his tenure and probably remains Miller’s most lasting and popular creation ever. She wasn’t quite an instant classic to me, but you could immediately feel the potential of the stories resulting from her deadly assassin skills mixed against the backdrop of her and Matt’s fleeting college romance and lingering fond feelings. That background is somewhat rushed in that first issue, but we do see Matt’s first “costume,” which is visually close to what Miller would later use for his Man Without Fear miniseries (and what the Netflix show will use). 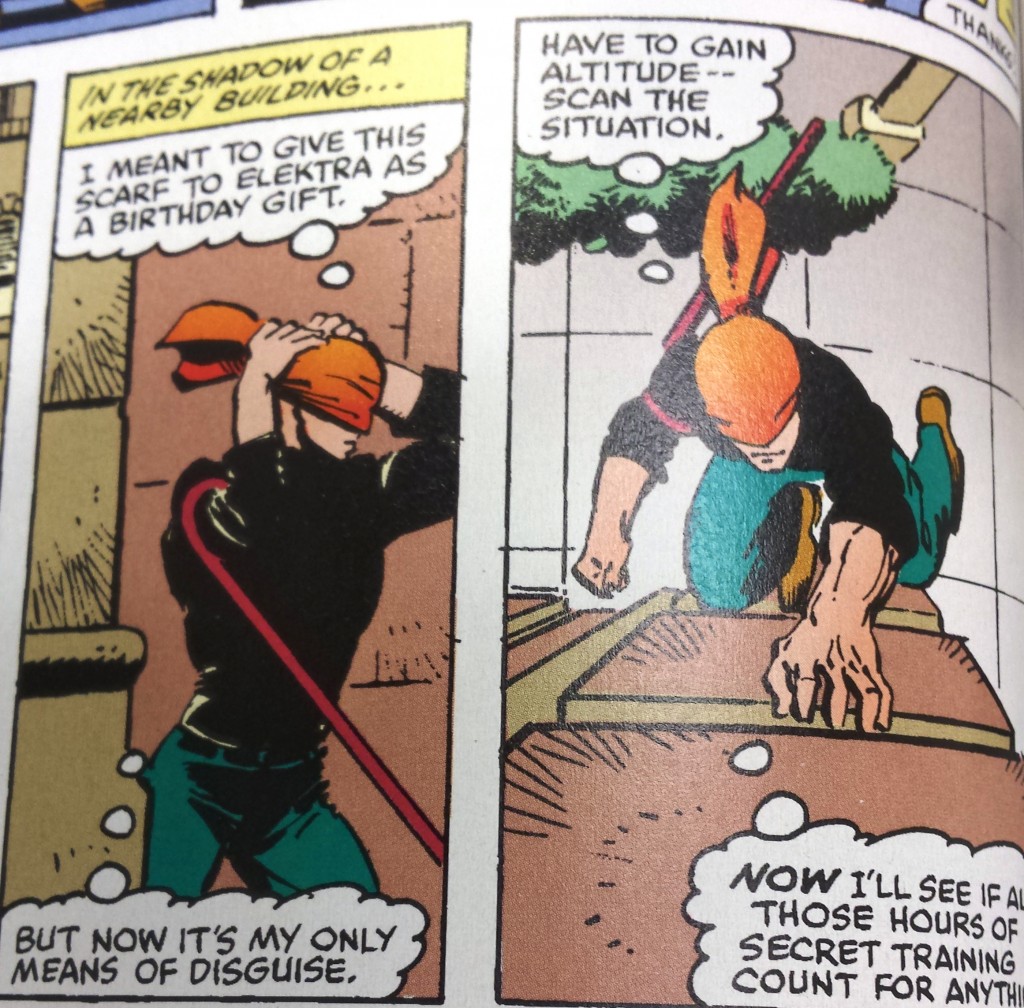 From there, Miller ramps up the rest of Vol. 1 dramatically. His second issue undoes the damage to Bullseye in an attempt to make him threatening again, via a discovery that the villain had been driven mad by a brain tumor. The dialogue in this discovery seems to explicitly confirm Miller’s (understandable) frustration with the poor plot he’d previously had to draw.

Doctor: “This tumor was probably responsible for his emotional collapse at Coney Island.”

Daredevil: “That did seem odd at the time…”

Matt then has to weigh Bullseye’s life versus the possible damage he could do in the future, which works really well in the story by placing even more weight on DD. But then things only get better with the introduction of Kingpin, an entrenched Spidey villain that Miller got the chance to use here, and used so well that he’d irrevocably belong more to the DD rogues gallery than he ever again would to Spider-Man’s. Kingpin is retired at the beginning of the story, and slowly drawn back into his role as a crime boss, largely against his will at first. Miller wrote Kingpin as a real human being, motivated by his genuine love for his wife, Vanessa. Throughout much of this struggle, Daredevil himself takes a mild backseat in the action, beginning something that Miller did several times brilliantly throughout his run: allow his excellent supporting characters to carry the action for a while without needing to insert his title character into everything. By the end of Vol. 1, Kingpin is back for good, and seeing him reclaim his power only makes him more intimidating; Miller humanized Wilson Fisk, but never lets you forget that he’s a cold motherfucker. Even more than introducing Elektra or redeeming Bullseye, Miller’s claiming of Kingpin might have been the biggest turning point in his run.

Vol. 2 collects issues #173-184 of Daredevil, and is arguably as good as any of the five TPBs I mentioned. Yet it begins with, in my opinion, the worst issue of Miller’s run. DD #173 features Matt Murdock berating his secretary, Becky, for not reporting to the cops when she was raped and crippled in a brutal attack in college. It’s a horrifying scene that part of me doesn’t even want to discuss, because this “hero” shows such a horrendous understanding of what sexual assault victims go through. In recent years, Miller has been accused of sexism, and if you want to see some of those roots, then you can look here (well, and at Elektra’s various gratuitous pin-up scenes). In the end, Matt forgives Becky (which is itself galling) for not reporting her rape, because he gets beat in a fight and so he understands how helpless she felt — as if voluntary mutual combat is really comparable to sexual assault. Oh, and Becky almost ruined a guy’s life by misidentifying him as her rapist. Those wacky, unreliable rape victims!

Ugh, sorry, I had to get that rant off my chest. Despite everything I just said, the rest of Vol. 2 gets genuinely awesome. Elektra vaults back to the forefront of the narrative, and Miller introduces his other Big Bad: The Hand, a shadowy group of mystic ninjas. While this is the focus for much of the rest of his run, Miller had a number of fun subplots, such as the former villain Gladiator’s efforts at seeking redemption; Gladiator allowed Miller to show a softer side of DD, as he genuinely tries to help a former foe whose problems involved genuine mental problems that he’s trying to control, rather than being evil. Another fun recurring character throughout his run is Turk, the hapless criminal whom Daredevil is constantly beating up for information, yet never learns his lesson (it’s much funnier than it sounds). The only subplot I couldn’t really get behind was Matt’s on-again/off-again relationship  with the wealthy Heather, who’s more of a prop than a character, which I’ll discuss more tomorrow with Vol. 3.

Vol. 2 also sees Miller bring in Stick, the old blind man who originally taught a young Matt Murdock to harness his new and scary powers, and helps him again now after an accident. Stick shines even more in Vol. 3, but he’s already a lot of fun here, and became one of the characters I’m most looking forward to in the Netflix series (he’ll be played by Scott Glenn). Miller again allows his hero to take a back seat to the action, putting a spotlight on Elektra in awesome battles against The Hand where she fights and wins solo. She also has a long-awaited showdown with Daredevil. 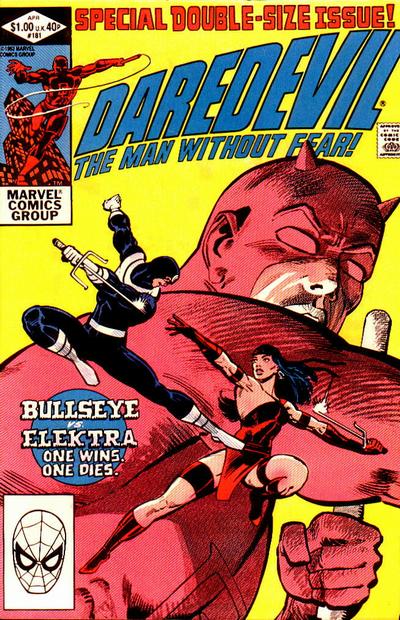 But it’s again Miller’s redemption of Bullseye that pays the big dividends, as his return to such a menacing status sets the scene for arguably the greatest moment in Daredevil history: the showdown between Elektra and Bullseye. It’s an electric issue with great repercussions, and Miller’s art gives it such an epic and cinematic feeling.

Vol. 2 ends with a two-parter that feels a little like an after-school special about the dangers of drugs, with Punisher guest starring and DD trying to help a boy (both as Daredevil and Matt Murdock) with the violent fallout of drugs. It didn’t do a lot for me, but it didn’t need to; I was still in awe from the Elektra issues that preceded it. Miller had shown that he was far from perfect, but he nailed big moments with true force.