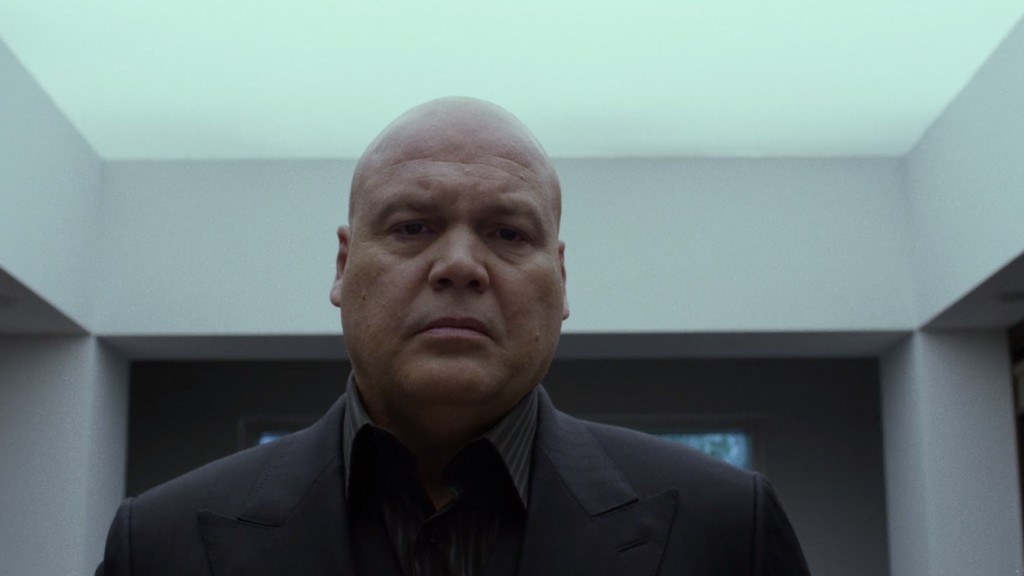 “Shadows in the Glass”

After seven sterling episodes, Daredevil keeps getting better, with “Shadows in the Glass” clocking in as my favorite to date. It’s a Kingpin-centric episode, ceding the spotlight to the tremendous Vincent D’Onofrio, as Marvel’s best villain they’ve created since 2011’s Thor with Loki.

So many comic book movies or just movies with a hero and an arch-nemesis posit that these men and women are two sides of the same coin, that they have more in common than they want to admit. That one decision or one moment neatly defined them as a hero, or as a villain. Daredevil luxuriates in the grays between good and evil, and instead of what normally feels like posturing and building a rivalry out of nothing, succeeds in making you believe that Daredevil and Kingpin are similar, frightfully so.

We see the stark contrasts of Matt Murdock and Wilson Fisk’s morning routines. Fisk, every morning when it’s still dark outside, wakes from a nightmare. Then he makes like the Hannibal of Hell’s Kitchen and cooks up a fancy omelet for himself. Afterwards, he selects a suit from one of the innumerable in his massive walk-in closet, matches it with an accompanying dress shirt and selects his cuff links, the unaccompanied cello suite no. 1 from Yo-Yo Ma gaining in intensity in the background. It’s operatic, sweet sweet Marvel music, as the Kingpin looks at himself in the mirror. Instead of seeing the dapper crime pin we now know, he sees a horrified bloody kid staring back at him. 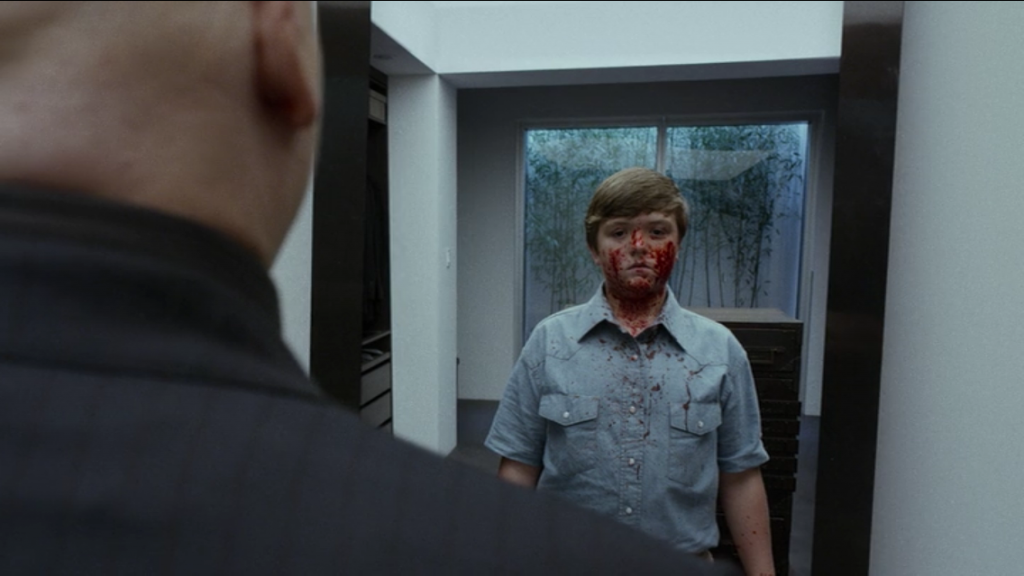 This kid is quite obviously himself, and we explore the blood on his hands and face, the blood that Wilson Fisk painstakingly tries to rinse off himself every morning, but never goes away. The permanent musk of evil that permeates his past, present and future.

Marvel has never created a villain like this before; they’ve never taken the time to explore the inner workings of the Big Bad. Instead, each movie merely cuts and pastes a new CGI-laden Heavy with MacGuffin-murky aspirations (and now, with an even bigger Heavy in the background pulling the strings; Thanos is the other side of Kevin Feige’s coin). Maybe they think they don’t have the time, but even on Agents of S.H.I.E.L.D. or Agent Carter, their villains are predicated on twists (The Clairvoyant!), reveals (TRAITORS!) and secrets (HYDRA!), without the care devoted to characterization.

Matt’s morning is no less painful: he can’t see his reflection, but if he did he’d see the fresh blood on his face and hands, and perhaps the blood that he’s been soaping off himself since the accident. Since his father’s death, since Stick. He limps through an apartment in tatters, the outward reflection of his inner turmoil. Wilson Fisk goes to pain-staking measures to keep his environs pristine to protect himself from lapsing into the chaos and anger, that when he does, results in car door beheadings.

After being alone on her crusade against Union Allied, Karen has brought in Ben Urich, Foggy Nelson and now Matt Murdock. Murdock cautions against their tactic, that they need to steer the battle onto their turf: the court of law.

Fisk has dealt with the Russians, but following the death of Black Sky, he has a new problem: Nobu (Falling Skies’ Peter Shinkoda) and the Japanese. Wesley wonders why he continues to be a part of their organization, and Fisk merely states that Nobu is a “necessary evil.”

We jump to the past, where (duh) Willie Fisk’s Dad is a dick. Bill Fisk (The Wire‘s Domenick Lombardozzi) is running for city council, working with Rigoletto, and instead of fighting in the ring like Jack Murdock, he fights with his wife. He also gives his pudgy son (a surprisingly really good Cole Jensen) a beer, desperate to make his son a man at all costs, who quickly spits it up. We now can make the assumption that DD is a better drinker, considering Matt took a sip of scotch and only made a face.

The Willie Fisk flashbacks veer dangerously close to being over-the-top and cliche (deadbeat, drunk dickhead Dads are sadly commonplace in superhero lore), but Domenick Lombardozzi brings unreal intensity and fearlessness to portraying just the worst human. Daredevil just takes a bit further. We know Bill is going to hit his wife and Wilson’s Mom, and something awful will happen from there, but the route we get there just is a bit more brutal and intense than one would expect, which could be said for Daredevil in its entirety. After finding out that his son got bullied, Bill tracks down the punk who did, dragging Willie along with him, and just starts wailing on the teenager, forcing Wilson to kick the kid over and over, a warped stepping stone to becoming a man in Bill’s mind.

In the present, Officer Blake has woken up, posing a problem for Fisk, since Blake likely won’t be so enthused about taking a bullet and nearly dying. Because of the city wide vigilance for the Man in Black, the security for Blake is beyond even Fisk. He doesn’t own all of the cops after all. His solution? Officer Hoffman (Daryl Edwards), Blake’s partner, who can get to him. Hoffman grew up with Blake, the two are partners and the best of friends. “How much are those years worth?” Fisk asks. Gulp. Hoffman has no choice, not really, but still cracks: “How long till I do something to piss you off?”

Hoffman goes to Blake, with a meatball sub AND a needle of death. He injects Blake, who wakes up as he does it. Nobody gets off lightly in this show. Hoffman apologizes, but it’s too late. That’s when not-DD bursts in, knocks out Hoffman, and manages to get a confession from Blake before his death. Of course, Blake’s death is pinned on DD, with Hoffman able to claim he was accosted, using the same ploy for his benefit that he and his partner used when we first were introduced to them.

Meanwhile, Nobu isn’t the only one getting frisky with Fisk: Leland’s bitter about being attacked by the Man in the Mask, concerned that he knows about his involvement. He also mentions his son Lee in passing, and you can bet your ass that a season 2 will involve his son becoming The Owl to avenge his father’s death (that will likely happen by the end of this season 1).

Every time we get a snippet from Fisk’s depressing past, we see Wilson wake up, and start the routine over again, getting at that egg protein breakfast. We don’t see Murdock wake up again; this is Fisk’s episode. Or maybe it’s Madame Gao’s (Law & Order‘s Wai Ching Ho) episode, because she’s brilliant every time we see her, and I love that she is the person Fisk respects the most. Gao comes to him TO HIS PRIVATE HOME (not only without an invite; nobody’s supposed to know about his castle in the sky), and basically makes Wesley useless. She knows that Fisk can speak Chinese, and she can also speak English, and has known from the start. Fisk excuses Wesley and the two talk, Gao concerned with Fisk’s direction, that he’s become sloppy and emotional like the Russians. She warns him to restore his house to order, or she’ll deal with Leland and Nobu directly. Will a 1,000 year old Chinese woman really squeeze out the Kingpin? I wouldn’t bet against her. After she leaves, Fisk flips a table and when Wesley returns to calm him down, Wesley continues to be useless. It’s the first time we see Fisk treat Wesley rudely on the entire show.

But Wesley’s the man for a reason: he brings Vanessa to his place. Fisk wants her to leave, but she doesn’t back down. He’s afraid, he admits, and then tells him his story. 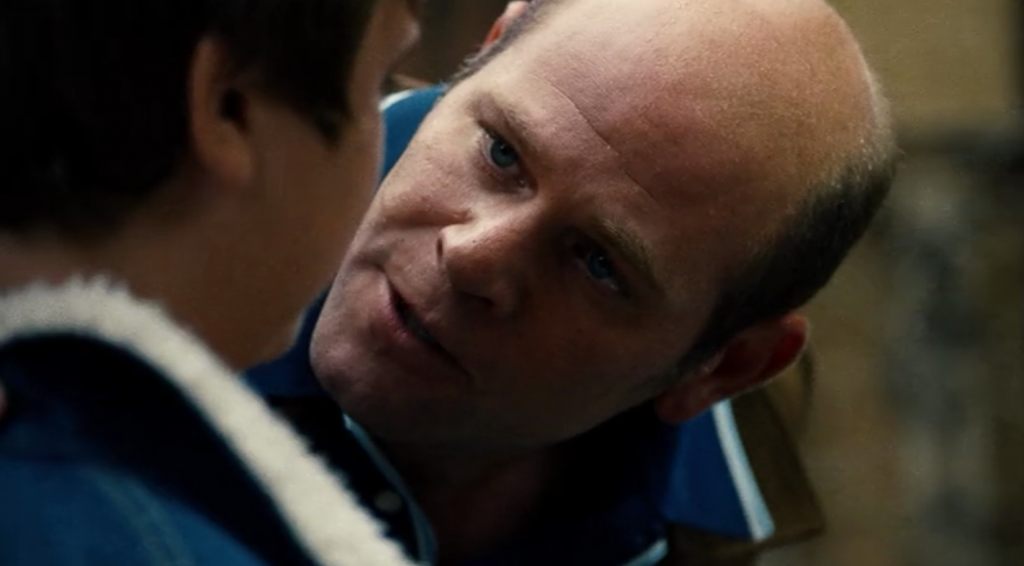 Every morning, Fisk wakes up and stares at his white walls, at his white painting. This connects beautifully with the flashbacks, as Bill forces his son to stare at the wall and think about what kind of man he wants to be. He’s 12, tops, but it’s never too early. He should be a King, not a “fat pussy.” Marlene, Wilson’s Mom, stands up for her son, and her reward is a beating. That’s when Willie Fisk chooses what kind of a man he wants to be. He stands up, grabs a hammer, and hammers his father to death, yelling “keep kicking him” over and over as he pummels his father’s corpse. It’s a shocking moment even when you know it’s coming, and it’s made crazier by his Mom’s calm reaction. “Get the saw.”

Vanessa, like his Mother, has a chillingly calm reaction to what she hears. “You’re not your father, you’re not a monster, you’re not cruel for the sake of cruelty,” she purrs, talking Fisk down. With her power over Wilson, Vanessa may very well be the most dangerous character of all.

The next morning, Fisk wakes up from his usual nightmare, but this time, Vanessa is beside him, and there are two omelets on the kitchen table. Wilson is no longer alone, and as we find out, that makes all the difference, leading into the best ending of the show thus far.

The Man in Black comes to Urich in one of the most moody, gritty, rainy scenes of the show, which is saying something. He gives Urich a name for his King and a story for his paper. While the evidence is he said she said, Fisk losing his anonymity would be a powerful attack on the Man Who Would Be Kingpin.

But Fisk strikes first, as we get a brilliant voice over from Urich, the powerful words from the story of a “man in the shadows” that he’ll never print. For Fisk goes public before he can be outed. Wilson switches the narrative, pledging aid for Hell’s Kitchen and promising to save the city in such a way that Oliver Queen would be proud, attacking The Man in Black. You “can’t live in the shadows” or be “afraid of the light,” a powerful lesson that Wilson Fisk has learned, turning the tables on our hero.

Matt Murdock is devastated, shocked, and alone. Similarly, Daredevil stands alone in the MCU, forging its own path outside of Infinity Gems and acronyms, and stronger for it. Unlike Agents of S.H.I.E.L.D., which only succeeds when it uses the greater universe its a part of, Daredevil is better for removing itself from it, an insular and breathtaking piece of art.