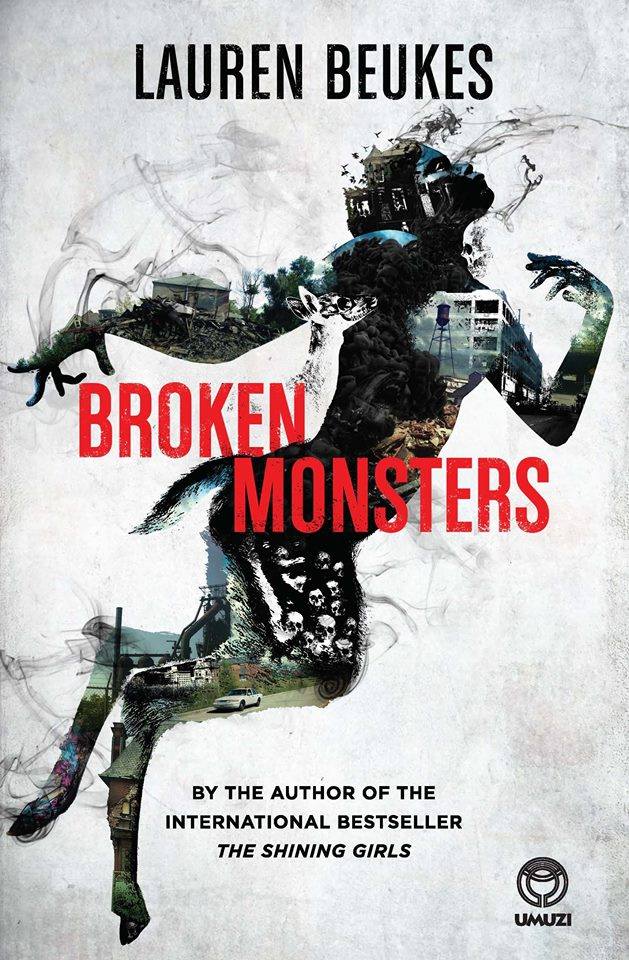 I’m not usually a big fan of the horror genre, as I’ve written in the past. But as I learned before, that doesn’t mean that I’m not still entirely susceptible to a well-crafted horror story that functions on some deeper levels. And that’s what you’ll find in the novel Broken Monsters by Lauren Beukes.

Broken Monsters takes place in broken-down modern Detroit as a serial killer roams the city. It opens on Detective Gabi Versado as she gets to the scene of a particularly gruesome murder, with a dead boy’s upper half fused with the bottom half of a deer. Right away, Beukes smacks you with the ugliness of this world, and the rest of the novel flows out of that expectation. The story is told through five points of view: the weary Gabi Versado, her teenage daughter Layla, gonzo journalist/blogger Jonno, homeless reformed alcoholic T.K., and the quiet artist Clayton.

The book spends little time on the whodunnit, hinting early on at the killer’s identity and confirming it to the reader no more than halfway through. The point of the book is more about the chase, and the characters themselves learning what’s going on. But even more than that, the point is about that ugliness in the world and how it seeps into each character’s life, putting all of them in positions of personal horror even before it becomes clear how they’ll all connect with one another.

I stumbled upon the book more by accident than design. I first became familiar with Beukes a couple years ago, when she wrote an excellent six-issue story called “Hidden Kingdom” in the Vertigo series Fairest (which is itself a compilation-style spinoff of one of my favorite series, Fables). Beukes’ story revolved around Rapunzel, a character who somehow had never come up in the many Fables stories before it, and a journey to Japan that explored some under-represented fables of the Far East. It was a wonderful story that may still be the very best to come out of Fairest, and got me to remember Beukes’ name to look for in future stories. But I neglected to read up on her and realize that she’s primary a novelist (and from South Africa, though she clearly did her due diligence on Detroit for this book), rather than comic book writer, so I was unaware of her previous critically acclaimed book The Shining Girls. I saw a positive review for Broken Monsters when it was released last fall, and cataloged it as a possible future read.

Last month, I bought the audiobook version off Audible, expertly read by a team of narrators: Christine Lakin, J. D. Jackson, Robert Morgan Fisher, Sunil Mohatra, and Terra Deva. I’ve been unable to find which narrator read which part, but the readers of the parts of Clayton and Gabi particularly stood out, with their voice performances really adding to the weight of those characters.

Beukes’ manages suspense with a masterful flair. The pieces of her narratives come together so well that I had a more-or-less constant lump in my throat as I moved through the story with both fascination and dread. The characters themselves are feeling the same types of emotions; every one of them is out of their element in some way. Take Layla, the 14-year-old who’s full of both good intentions and a recognition that she’s in far too deep as she finds herself playing a dangerous game in baiting a pedophile. Or T.K., who’s lived the roughest life of them all but might have the best handle on the terrible things life can throw at you. Everyone is forced to live through something they shouldn’t have to, but placed in situations where the only possible direction is forward.

Beukes’ final act introduces a surprise element that genuinely shocked me and made the final showdown even more rife with high stakes. Broken Monsters is a thrilling tale that takes the time to build in real emotional baggage for all its main characters, even as it’s tearing them all down with waves of horror.