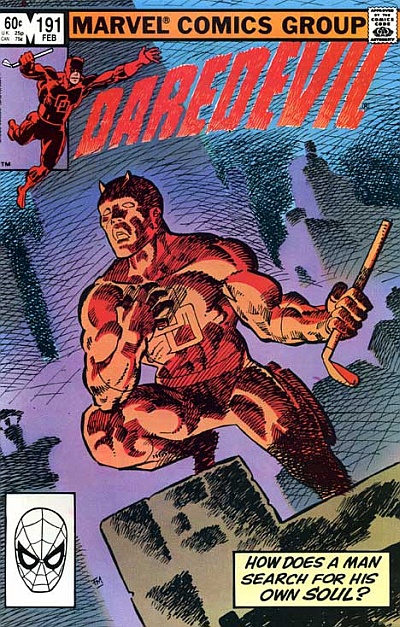 Welcome back to Daredevil Week, where we’re counting down to the release of the new Marvel/Netflix show Daredevil with a look back on some of the character’s most famous moments. Yesterday, I looked at the first two volumes of Frank Miller’s famous run on the comic book, and we continue today with another dose of peak Miller.

We pick up with Vol. 3, which collects Daredevil #185-191, 219, What If #28, and the Daredevil: Love and War graphic novel. It also marks the end of Miller’s run as the regular writer and penciller of the book. The main crux of the TPB involves the war against The Hand, but early on, we get a particularly fun spotlight on Foggy. Foggy at his best makes for a truly excellent civilian sidekick of sorts, a lovable buffoon who’s occasionally brilliant. Miller only gave him a couple spotlights, with the one in this volume being the most fun. Foggy tries on his own to unravel a conspiracy, making his way through the underworld with some legitimate moxie, but also a lot of help from Daredevil, who follows him around unseen to take out would-be attackers before they can hurt him. Foggy selling himself as the badass tough guy “Guts Nelson” was the character’s highlight of the series.

The big subplot in much of Vol. 3 revolves around Matt’s continued relationship with the socialite Heather, which throughout Miller’s run felt like a storyline that someone meant to end much earlier but forgot to, and so it just drags along. The pair ends up engaged, with an extreme lack of enthusiasm from both sides. In Vol. 3, this has morphed into something of an emotionally abusive relationship, with Heather too beaten down to walk away from it, and Matt too caught up in his obsessions to even notice he’s the abuser. The charitable reading of this whole situation is that it’s an attempt to add shades of gray to the good guy, something Miller always has enjoyed, but if that’s the intent, it’s never fully developed — in part because Matt never has to even notice his flaws; Foggy, with an assist from the Black Widow, rectifies the situation for him. A less charitable reading would be that Miller had a tendency to use women not as fully realized characters in their own right, but as something closer to props; maneuvering them in ways that their suffering is really just a means to an end for invoking some response in the male protagonist. If you subscribe to such a reading, then you probably also see it in Miller’s treatment of Karen Page in “Born Again,” of the women in Daredevil: Love and War, and maybe even in his final treatment of Elektra in Vol. 2. With either interpretation, it’s at least a conversation worth having. Miller has produced some brilliant works in his life, but most of them are not without problematic aspects.

But like I said, Vol. 3 is really about the war against The Hand, and to an arguably equal or greater extent, about Matt’s continued preoccupation/obsession with Elektra. And it’s in that story that the best of Miller shines through. Daredevil becomes a party to more ancient war involving The Hand and the group led by his former mentor Stick, who returns to show the full extent of what a badass the character is. The aforementioned Black Widow gets to play a big role as an ally in the battles. The final issue of this war is among Miller’s very best on the title, with death and resurrection, sacrifice and redemption.

With issue #191, Miller ended his regular tenure on the title. That final issue was a stand-alone piece, but really embodied a lot of the ideas that he tried to bring to DD. As Matt revisits his old nemesis Bullseye, he reflects on a recent encounter and the damage that gets inflicted upon the innocent bystanders to fights between good and evil. It’s a distillation of what it means to be a hero in a world of blurred lines, and how to fight the good fight while holding onto your soul.

Miller would, of course, end up returning to the character and book for isolated stories.  In Daredevil #219, he tells a weird and random story where Matt visits a small town and helps them clean up violence, while never appearing in costume. The Daredevil: Love and War graphic novel finally revisits the subplot of Vanessa Fisk that Miller left dangling during his original run. Bill Sienkiewicz provided his wonderfully unique painted art for the story, which had some strengths but ultimately failed to resonate the way Miller’s best stories had. In What If #28, Miller provides the alternate reality story of what if Matt Murdock had joined S.H.I.E.L.D. after losing his eyesight and gaining his powers. It’s a rushed and rather unexciting story, but I did like Matt’s S.H.I.E.L.D. uniform:

It was the infamous “Born Again” story, from Daredevil #227-233*, that saw Miller’s most triumphant return to DD. Rather than also drawing himself this time, he partnered with artist David Mazzuchelli, who nailed it.

(*As a sidenote, Marvel’s TPB collection of “Born Again” also includes Daredevil #226, which contains some very helpful setup for the circumstances present during “Born Again.” However, because #226 wasn’t technically part of the “Born Again” storyline, Marvel placed it after the conclusion of #233 in its TPB, which is pretty stunning idiocy. So if you ever get that TPB, do yourself a favor and flip to the back (carefully, of course, to avoid any spoilers from the end of “Born Again”) and read #226. It’s not strictly necessary, and not even a particularly good or interesting issue, but it is helpful — and much more helpful if read before #227 instead of after #233.)

“Born Again” is usually lauded as the greatest Daredevil story of all time, and it probably is. At its heart, the story reminds me of Miller’s final issue as the regular writer, #191, in that it’s very much a deconstruction of what it means to be a hero. But “Born Again” goes far further, forcibly tearing the entire paradigm down to expose its vulnerability, then rebuilding it with tender care.

The premise involves Kingpin learning that Matt Murdock is Daredevil, then using that information to systematically ruin his life. It’s not enough for Kingpin to kill Matt (though he wants that, too); he wants to take everything away from him first. And boy is he successful; watching Matt’s downfall is an amazing experience. It’s not that the idea of the hero losing everything was that revolutionary, but Miller’s great success in the story is how much he makes you feel the pain of Matt’s descent as we watch him go mad from his fall. Ben Urich has a great arc himself. And present throughout is Karen Page, Matt’s original 1960s love interest who had left the book by the time Miller originally came on, and I’m not sure Miller even mentioned her name in his original run. Here, she’s a critical player, and while you can definitely argue that Miller’s treatment of her is problematic in some ways, she has a pretty impressive redemption arc; far more than even Matt, she goes through hell trying to get back to her old life. 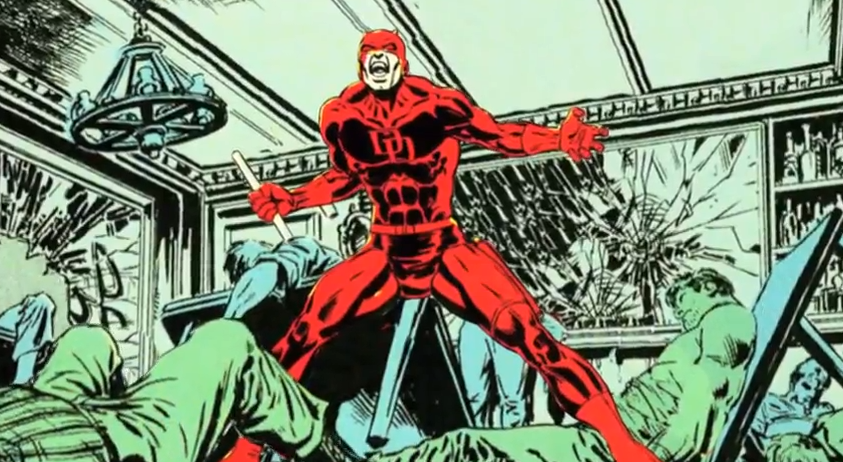 And with such a fall, of course, comes the rise. This leads to the greatest line in Daredevil history, as Kingpin realizes he failed to finish off Matt and silently reflects on the hero, from whom he took everything and may have only made more dangerous in doing so:

“What is it about Murdock? He was a minor concern – a promising talent to be observed and cataloged and even occasionally flattered – and perhaps, one day, to be turned to the Kingpin’s way—but he is more than this. Now he is much more than this. He always was. And I—I have shown him…that a man without hope…is a man without fear.”

It probably wouldn’t make a lot of sense for Season 1, but if we get more of Daredevil on Netflix in the future (which seems highly likely), I demand to see Vincent D’Onofrio say that line.

The only reason I hesitate even a slight amount to immediately crown “Born Again” as the top DD story ever is that I’m not sure it quite stuck the landing. The villain Nuke is brought in as the final obstacle, and Miller certainly conveys his particular brand of insanity quite well. But the Nuke element plays more to themes of extremism and patriotic corruption that felt out of place with the rest of “Born Again” to me. Captain America has a heavy guest star role at the end, and indeed, the final act feels like more of a Cap story story than a DD one.

But there’s still so much greatness to this story: what happens when we lose everything, and how do we bounce back from our toughest defeats? That’s always been one of the core tenants of Daredevil as a character — a man who lost his sight, lost his father, but found a way to soldier on to become something greater.