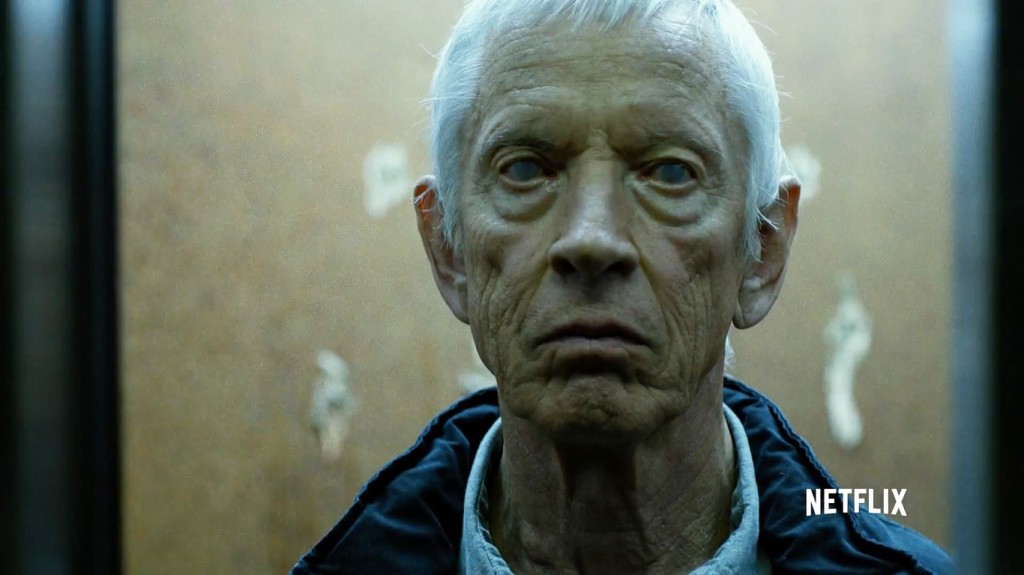 Daredevil was so successful right off the bat because it threw the audience right into the action. While he wasn’t (and still isn’t) called Daredevil, the Man in the Mask was more than a competent fighter. He was already fighting crime. Marvel eschewed the traditional origin story at the top, and instead, sprinkled it across the first three episodes in pretty damn effective flashbacks.

But how the hell can Matt Murdock fight? How is he such a badass? Well, part of the answer finally comes in the seventh episode of the series, where we’re introduced to Stick (The Silence of the Lamb‘s Scott Glenn), the also-blind, also-badass gruff mentor to a young Matt Murdock. One scene with Glenn and we know immediately how Daredevil is so awesome from the moment we see him.

Foggy’s busy ranting about “the devil of Hell’s Kitchen.” He’s a “terrorist without the ist,” and he wants to punch him, believing him to be a coward, turning into the J. Jonah Jameson of this show for a scene. Matt believes the MIB should be defended in court and not in the press. He’s right, but also pretty darned biased, and we all know life doesn’t work like that.

Foggy’s antsy and wants to do something, and that apparently means starting a law firm softball team, which would be awesome, even though they have 3 members and one of them is blind. He invites Karen to go to the batting cage, but she rebuffs his offer for a “thing.” Foggy thinks she’s up to something, because everybody is (except for Foggy, who’s gloriously transparent).

Last episode, DD got the name of “Leland Owlsley,” the accountant in charge of the money dealings in Fisk’s empire. He pays him a visit. When Matt hears someone using a walking stick approach, he’s distracted enough for Leland to taze him and drive off. Leland had a chance to finish this show right then and there (though Stick wouldn’t have let him). But still, you’d think Leland would maybe shoot/attack DD while he’s down, considering how much trouble he’s caused and how much he’d be rewarded by Fisk. Instead, Stick does the wise/ass/gruff mentor thing.

In the past, Matt’s living with nuns, a sitcom waiting to happen, and they’re desperate for help with this poor screaming kid. Enter Stick, a man who wants cash to help. Immediately, he changes Matt’s attitude: that he’s lucky to be alive, to have these gifts, and that nobody’s going to feel sorry for him and he should stop feeling sorry for himself. It’s a no nonsense approach to the ice cream social. Speaking of, Stick hilariously points out the flavors inherent in the dessert: can taste the specific diaries, the dirt off the hand of the server, the chemicals…no wonder Stick is so skinny. I’d never want to eat anything if I had that kind of knowledge. Ignorance is bliss when it comes to food chemicals.

Then, the training montage begins, because Matt needs “skills for war.”

Ben Urich, meanwhile, is pulling the gruff mentor routine on Karen Page, with an eerily similar message: “Stop complaining.” It’s a hard case, and complicated, they just gotta “straighten out that spaghetti.” Okay, so Stick would never say that.

Apparently Detective Blake is in a coma, surviving the gun shot. Daredevil loves comas. On the subject of the vigilante, Urich pontificates: “There are no heroes, no villains, just people with different agendas.” Urich just drops truth all goddamn day.

Apparently, Stick’s been absent from Matt’s life for 20 years. Why is he back now? Well, to save everyone from a horrible death, silly. He follows Matt to his apartment, disappointed to see the kid gone soft, because he has a bed and “soft stuff.” Women are a distraction, he barks, then goes for a crappy German beer, hypocrisy incarnate. Stick warns him that he needs to cut loose all relationships, friends, women, whatever. “They will suffer and you will too. Relationships aren’t for you and me.”

Of course, that’s because Stick projected his entire life and mantra onto a 9 year old boy. Daredevil started with a 9 year old boy sipping scotch at the behest of his bloody Dad. Now we see an old man beat the shit out of said 9 year old boy (who can still do crazy kicks and leaps!). I haven’t mentioned Skylar Gaertner at all through my recaps, and while I think he’s been great for a child actor in most respects as “Young Matt,” when he gets emotional, the overacting is painful, as it in the aftermath of their training.

After time has passed in the flashbacks, Matt gives Stick a bracelet, made from the ice cream cone wrapper from their first bonding moment. It’s touching, and that’s the problem. Stick crumples it up and abruptly ends their training. “I expected more of you,” he says, shattering Matt Murdock.

Stick also attacks Matt’s “no kill” belief, that they’re essentially “half-measures” that will come back to haunt him. Stick wants his help to take down Nobu (the head of the Yakuza/Hand presence) and the Black Sky. Matt offers help, but only if Stick promises not to kill anybody. He does, but not without a comeback: “Pussy.”

Page visits Ms. Cardenas, bringing groceries. Cardenas wants to pay her back, but Karen wants information instead. Before she does, Cardenas continues to tout our boy Foggy, telling Karen that she can tell he loves her by the way he looks at her. Karen clearly feels uncomfortable, and it makes me wanna cry that she’s leading on Foggy like this. Cardenas then describes a bald man and a tattooed guy that hung around the building as enforcers (but not Enforcers).

I’ve touched on it previously, but I’m continually impressed with how Daredevil handles languages, and bilingual speakers, and infusing Hell’s Kitchen with its melting pot of ethnicities and languages, and not force feeding us subtitles. It feels more real because of it.

After their rendezvous, Karen’s IMMEDIATELY accosted by said bald and tattooed men, and it looks bleak, until FOGGY TO THE RESCUE. He throws a softball at them, then attacks them with the bat, and then Karen finishes one of them off with some mace. They really need to start this softball team. It’s a wonderful moment, but instead of being thankful for her life, Karen wonders why he’s following her. Because he’s WORRIED about you (and kind of creeping, to be fair).

At the docks, not-DD goes about taking down the not-Yakuza. Nobu opens the crate, and “Black Sky” turns out to be a young boy. Stick aims and takes a shot with an arrow at the boy. DD deflects it, allowing the boy and Nobu to get away.

Well he gets away from Matt; not from Stick. While Matt was dealing with Nobu’s men, Stick went and killed the boy. This betrayal puts them both over the edge: “I needed a soldier, you needed a father.” The two have an intense, brutal and thrilling fight (one of the best in a series chock full of them), after which, a bloody Stick grunts, “Maybe there’s hope for you yet.” He makes to leave, but before he does, he leaves Matt with his wooden sticks. “You’re going to need them.” I love how important and dignified these nondescript wooden batons are treated. They’re like the equivalent of Buffy’s stakes.

In the wreckage of their fight in his apartment, Matt finds the bracelet his younger self gave to Stick. Aw. I love emotional and physically abusive relationships.

The two big takeaways from the episode are this: after saving her ass, Karen brings Foggy into the fold with Urich, introducing him to Urich’s playing cards map of the city’s crime scape.

The second: Stick is going to be a big player the rest of the season (or next), if not immediately. He meets a massive scarred man, in front of a fire, “no idea” if Matt will be ready when “the doors open.” The guess is that this is Stone, one of Stick’s other pupils, and a fellow soldier in the war against the Hand (the secret ninja organization that Nobu most definitely works for). It’s the first Easter Egg-y larger picture ending of Daredevil, and arguably, its most compelling. 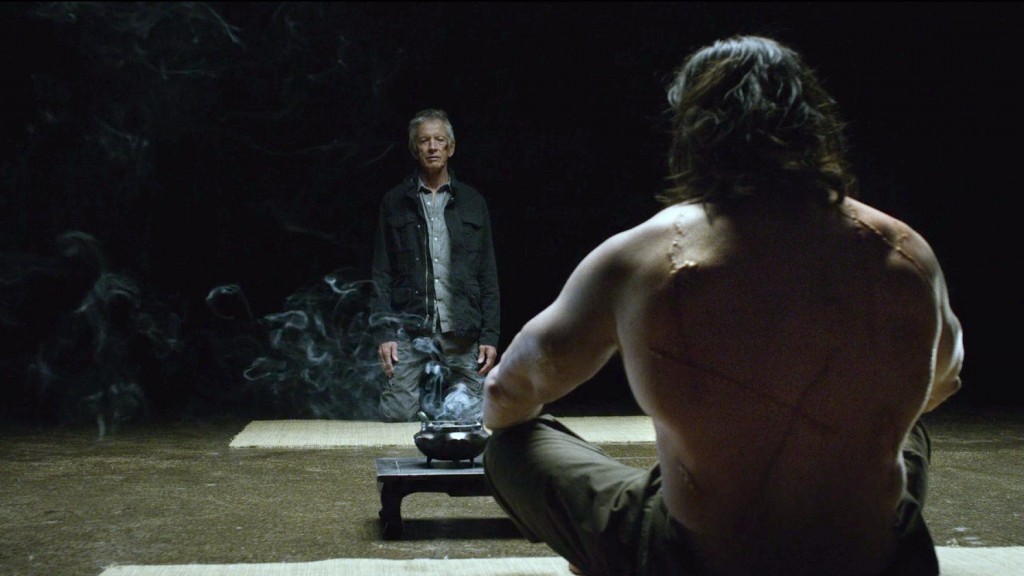