“The Land Before Time” Drinking Game 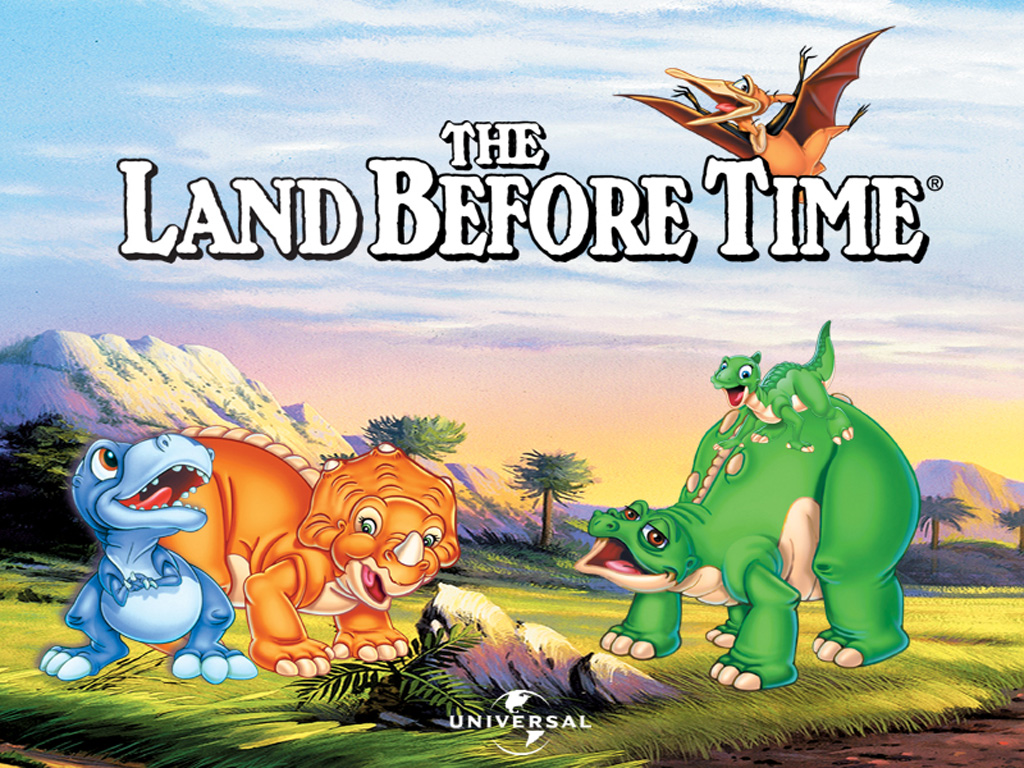 At this point during SEVEN INCHES OF YOUR TIME’s brief tenure as a staple for nothing, director Don Bluth, along with owls and Edward James Olmos, have practically become the idols to whom we worship.

Don Bluth burst onto the directorial scene with THE SECRET OF NIMH in 1982, intent on combining owls and terror for the next 20 years of his film career. His resume includes AN AMERICAN TAIL, ALL DOGS GO TO HEAVEN, ROCK-A-DOODLE, THUMBELINA, ANASTASIA and TITAN A.E. (which I recommend watching whilst gorging on pot brownies). But one movie looms over the rest of them…thanks to a litany of longneck’s.

That would be LAND BEFORE TIME (1988), a childhood classic that is now known as what kicked off a franchise that overstayed its welcome thanks to its 43 sequels. It’s easy to forget how important, sad and poignant a film the first one was, and considering Don Bluth’s track record, it’s hard to discount his part in creating a movie that will make you laugh, cry, shriek and learn the benefits of racism.

Don Bluth had some help behind the scenes, as LAND BEFORE TIME had more muscle behind it than any other movie that’s ever been made. The powerhouse of producers includes arguably the most powerful couple in Hollywood, Kathleen Kennedy and Frank Marshall, who acted as co-executive producers, along with George Lucas and Steven Spielberg, who also produced the project. You thought INDIANA JONES was George and Steve’s best collaboration, but you were wrong. 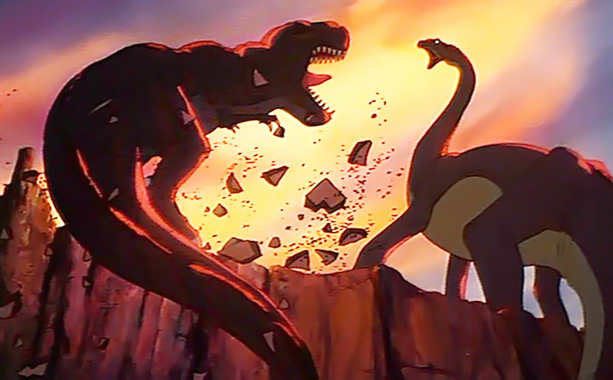 LAND BEFORE TIME is only 69 minutes long, but it packs more emotional wallop than an entire season of REBA. Commissioner Gordon (Pat Hingle) is our host for the movie’s entirety, narrating the tale of five baby dinosaurs forced to grow up without parents mere minutes after being born, while facing the terrors of prehistoric times. There’s Littlefoot (Gabriel Damon), a Brontosaurus who watches his mother get murdered by a Sharptooth (T-Rex). Cera (Candace Hutson) is a headstrong triceratops separated from her father, Daddy Topps (the greatest Daddy character name this side of Daddy Warbucks), and won’t let you forget it. There’s the wise Rooter (also voiced by MVP Pat Hingle), who has giant Circus Peanuts for eyebrows: 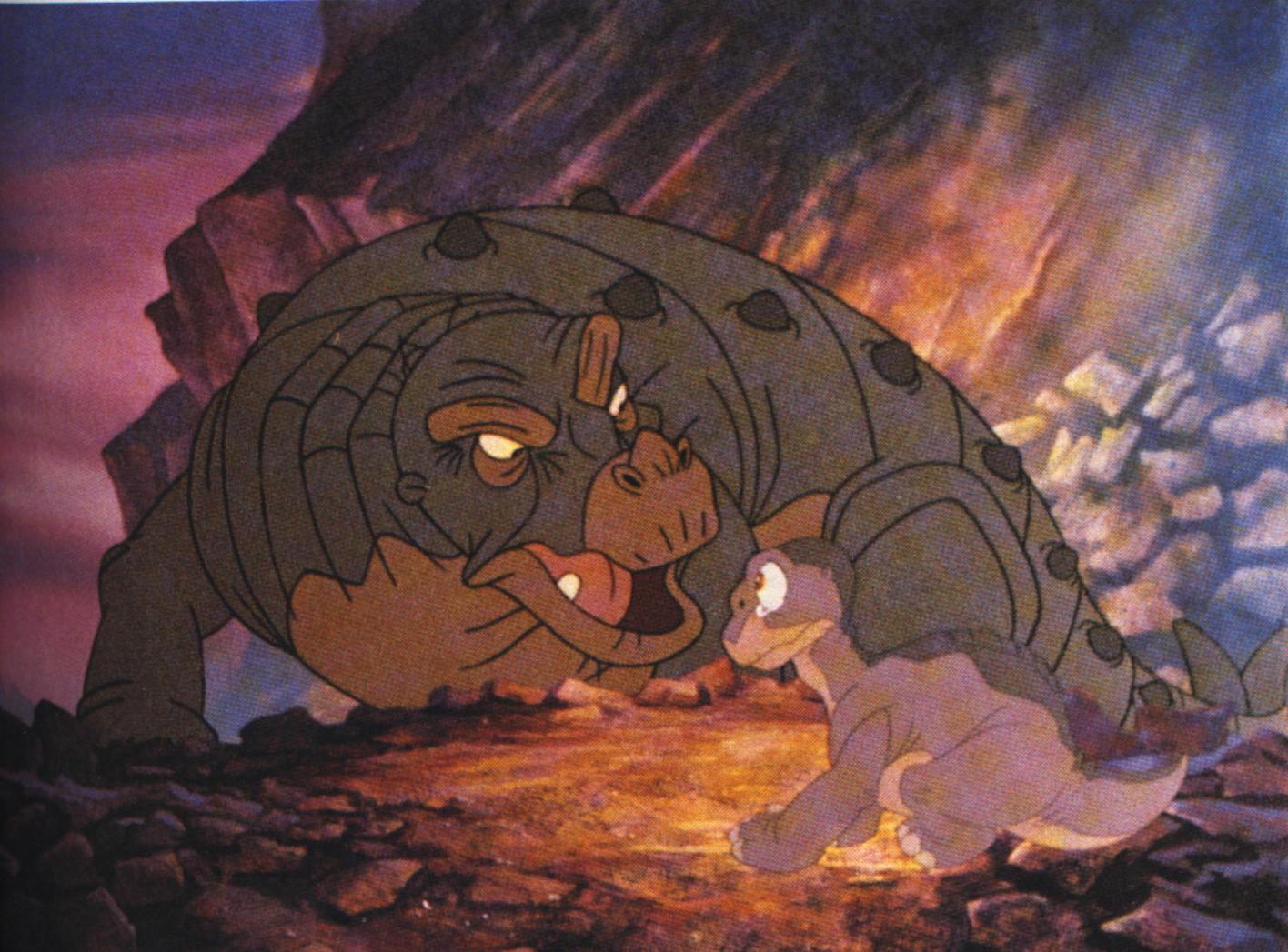 Then there’s breakout (tree)star Ducky, who you either find to be the cutest dinosaur you’ve ever seen, or want to flush down the toilet. 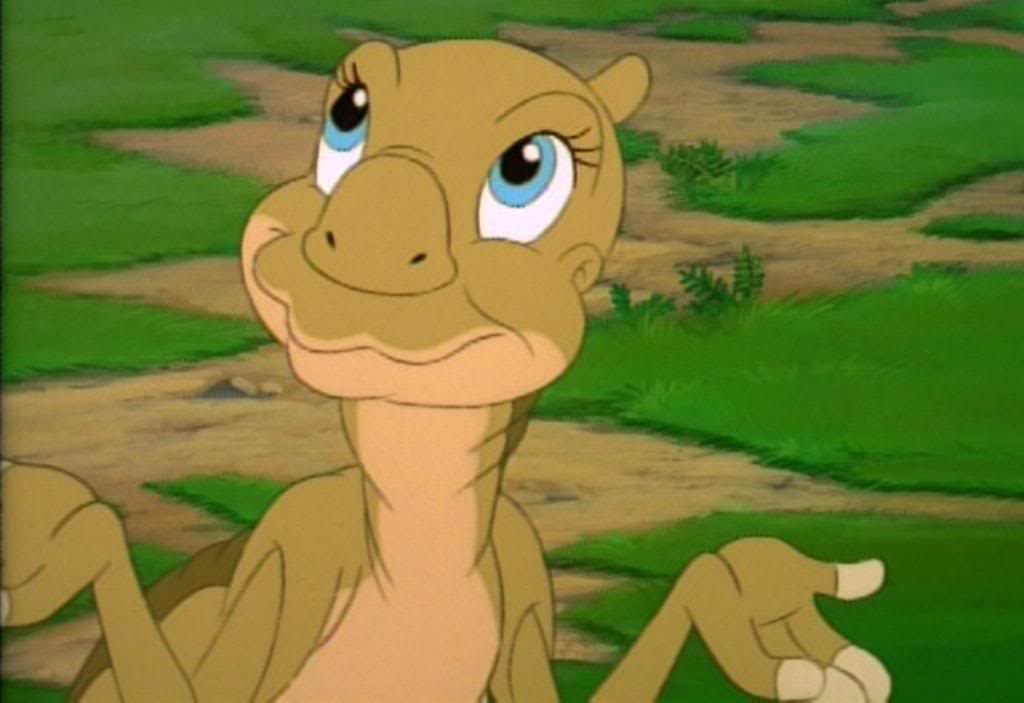 Your heartless if it’s the latter, but I’d forgive you if you find Petrie, the hyper-sensitive, scaredy cat pterodactyl Petrie, annoying. I prefer Robin Williams’ Batty Koda myself. 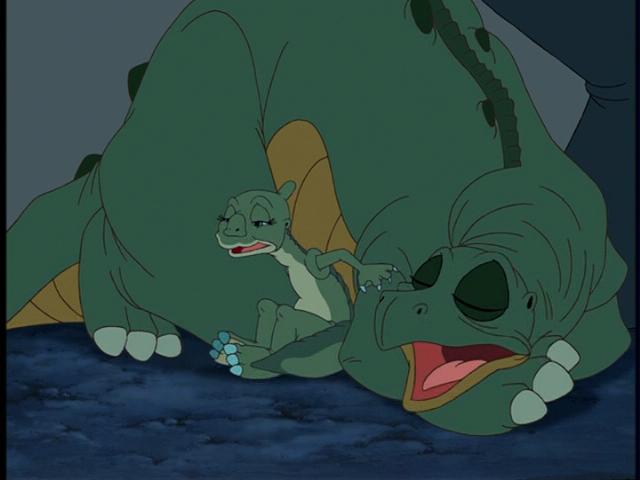 Lastly there’s Spike, who’s basically an even more mute Eeyore. Together, the five orphans must travel to the Great Valley in hopes of finding more of their kind, and learning that segregation/dino-racism is bad.

Of the 12 direct-to-video sequels, none of the rest included Don Bluth, George Lucas or Steven Spielberg’s involvement. It’s hard to believe Lucas wasn’t involved in the sequelitis, but perhaps he rightfully recognized LAND BEFORE TIME as his crowning achievement, and didn’t want to fuck it up further like he did with Indy or STAR WARS.

THE LAND BEFORE TIME is nightmarish, forcing kids to come to grip with the possibility of life without their parents at a frightfully young age, but it has a powerful message: that with friends, you can accomplish anything, and beat the Sharptooth’s of the world. You’ll also learn to blame yourself for personal tragedy, but at least this time, Littlefoot has a point. It’s totally his fault his Mom died. Don’t wake up a T-Rex. 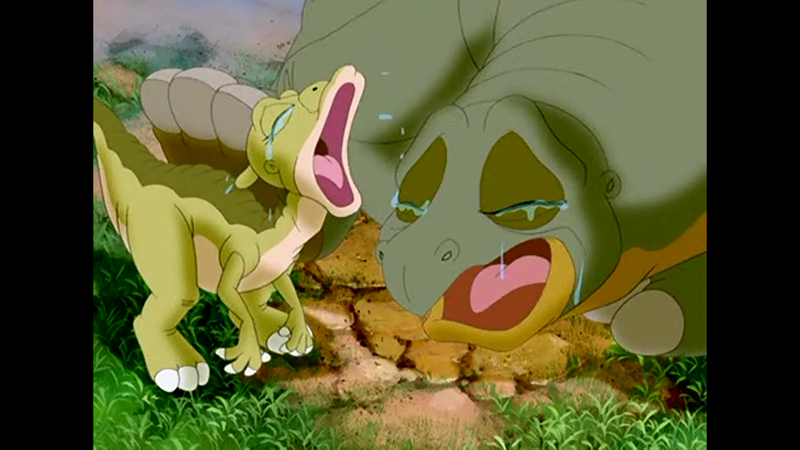 Wanna cry more? Judith Barsi, who provides the adorable voice to Ducky, died when she was ten years old.

….Ready to drink? I thought so. Without further ado, I present…

3. I spy, with my little eye, a dinosaur egg. Your reward? Sip dat drank.

4. Drink every time the gang is in danger.

5. And while you’re at it, drink for every different type of dinosaur.

6. Have a sip for every flashback.

7. Drink when a character says something racist (“You can’t play with longnecks”). I don’t recommend screaming “Longneck bitch!” out loud during the proceedings. You’ll be sleeping on the couch.

8. Any time Petrie is afraid, drink. Double it if you are, because this shit is terrifying.

9. Yay, a TREE STAR! Quaff your beer. Be honest, you still get a tingly when you think about the magic of tree stars. 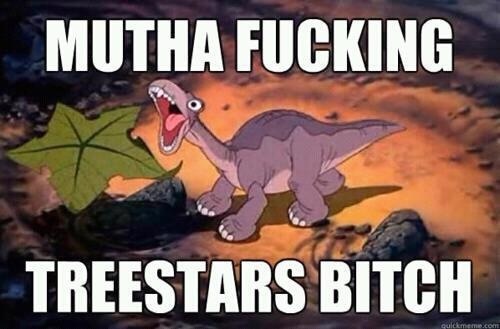 10. Drink when parents are openly concerned about their children.

11. Drink away your sorrows whenever you cry. It’ll happen. 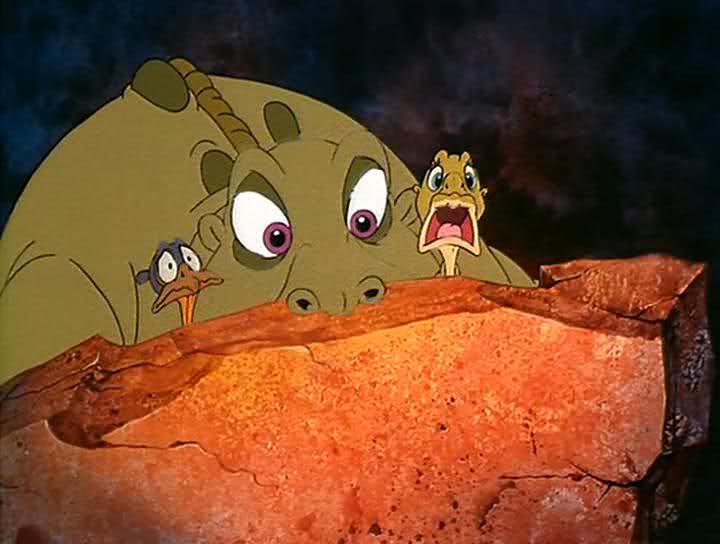 And that’s it. But don’t cry. The beauty of THE LAND BEFORE TIME is that there are 12 MORE SEQUELS TO ENJOY. I can’t wait for THE LAND BEFORE TIME XIII: THE WISDOM OF FRIENDS. It sounds particularly inspiring and wise. With any luck, the franchise will continue, promising an infinite number of drinking games to enjoy.

THE “GET EXTINCT” EDITION: Just soldier on to the Great Valley and drink your way through more than one sequel in a night. Be sure to have a lot of Tree Star’s on the side.