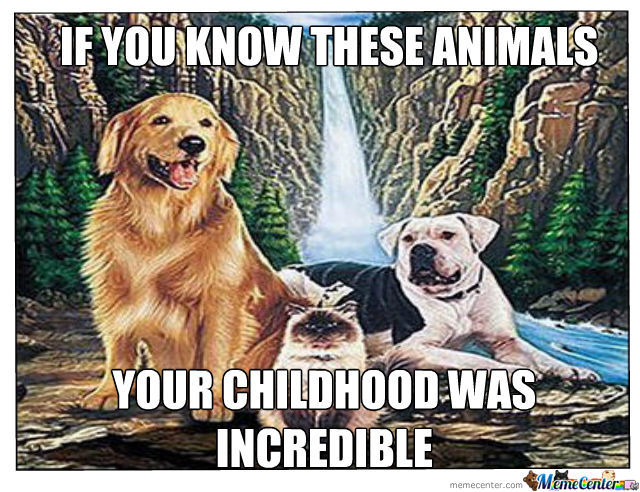 Be sure to listen to the end credits music while reading this post.

When someone gets on a high horse about remakes, calmly tap them on a shoulder and tell them that without remakes, we never would have gotten HOMEWARD BOUND, a remake of the 1963, coming thirty years later.

HOMEWARD BOUND is like OLD YELLER with talking animals, that didn’t bother with making their animals bark or move their mouths when they spoke. It didn’t matter then and it doesn’t matter now. 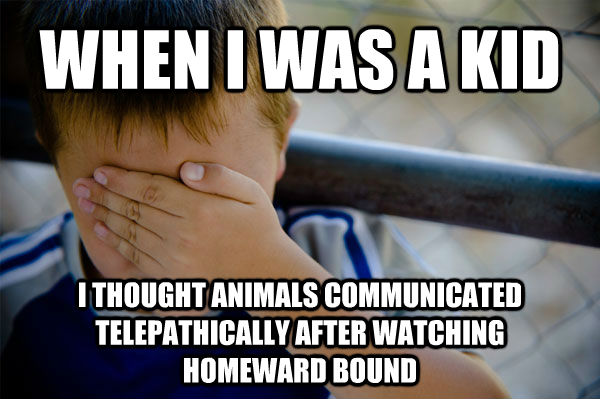 Bob Seaver (AIRPLANE!’s Robert Hays) and Laura Burnford-Seaver (BRAZIL and MANHUNTER’s Kim Greist) are getting married, and bridging two families together, as well as a slew of pets. It’s a complicated situation that almost every kid can grasp onto in some respects. Sometimes it’s almost too real, with the bickering between the siblings and the step-parents, along with the added dimension of misbehaving pets. 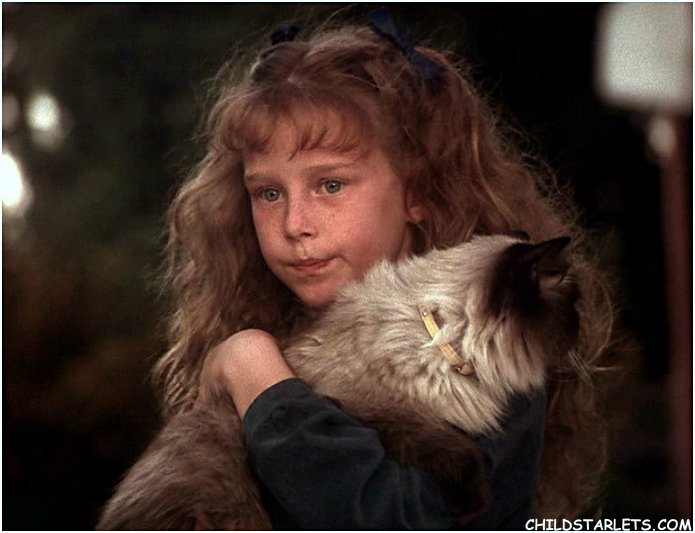 There’s frizzy haired Hope Burnford, who looks like a young American Hermione Granger. She’s played by Veronica Lauren, who would go on to play Vocal Jazz Girl in AMERICAN PIE and have a 7 year tenure on DAYS OF OUR LIVES. She’s hot now: 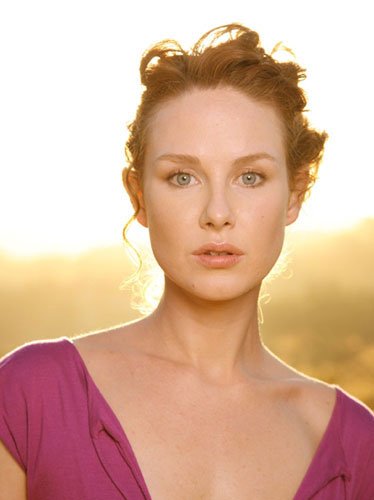 Jamie (Kevin Chevalia) was sometimes the only one sticking in Chance’s corner, and was one of the least annoying little boys in a kid’s movie ever. He still has his moments.

Peter (Benj Thall) sadly did continue acting, but he’ll always be Peter to me. He should’ve moved right into CHRONICLES OF NARNIA as Peter in that franchise.

Kate (GARDEN STATE and 24’s Jean Smart) is the reason the animals think they’re abandoned, as the family leaves them at her Ranch (“in good hands”), and then SHE LEAVES THEM herself, with just a poor ranch hand left behind. No wonder Shadow, Sassy and Chance were so concerned. Kate is the real villain in this movie, if not mud, porcupines and rivers.

This movie is all about the pets, just like life. Sally Field has been channeling her Sassy (Tiki the Cat) performance in every other role since (especially LINCOLN), as the feline and female presence of the trio. She’s annoying and snooty, but like cats themselves, take a bit of warming up to get used to. 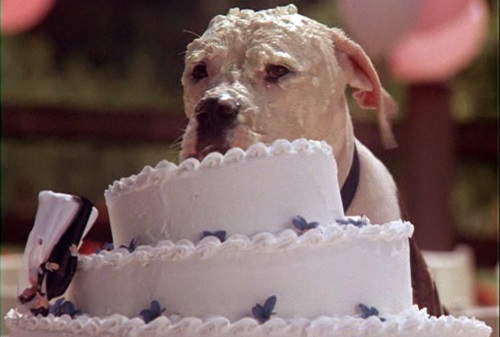 Chance is Michael J. Fox’s second best role, in a career littered with excellence. Chance is the Michelangelo of the group, the fun-loving dog rescued from the pound that isn’t ready to be locked into a relationship with a human…until he learns what it takes to be a man/dog from Yoda/God/Gandalf/Saint/Giles. That would be Shadow, the greatest dog who’s ever lived, the dog that we all identify with the most, the impossible example that all real life dogs must live up to. The dog that we want, the honorable, loyal, loving, smart, old Shadow.

Michael J. Fox kills it as Chance (or Rattler, the dog we see), providing exuberance that pours out of his fur coat, despite the funky telepathic delivery. But it’s Don Ameche, the man who voices Shadow, that lets us into his soul.

Don Ameche is a Hollywood legend. The guy was in the original THE THREE MUSKETEERS way back in 1939. He played Alexander Graham Bell in a movie, which seems like something that would happen in the 1930’s. He was on THE LOVE BOAT, COCOON, and appeared alongside Eddie Murphy in COMING TO AMERICA and my personal favorite TRADING PLACES as Mortimer Duke. You might remember him from this scene:

His role as Shadow steals the film, and in many ways, the events of the film mirror Don Ameche’s life. It’s the second to last film he worked on, and he died the year HOMEWARD BOUND came out. But it was his spirit and soul that we all responded to, when he summoned depths we all could only hope to skim the surface of, when Shadow (played by Ben the golden retriever) clambers out of that infernal mud pit. All to get back to his Peter. I’m tearing up just thinking about it. Or if you want to stew in depression, here’s the whole scene:

And here’s the most triumphant, best scene in cinematic history:

Shivers. Goosebumps. All of the tears. 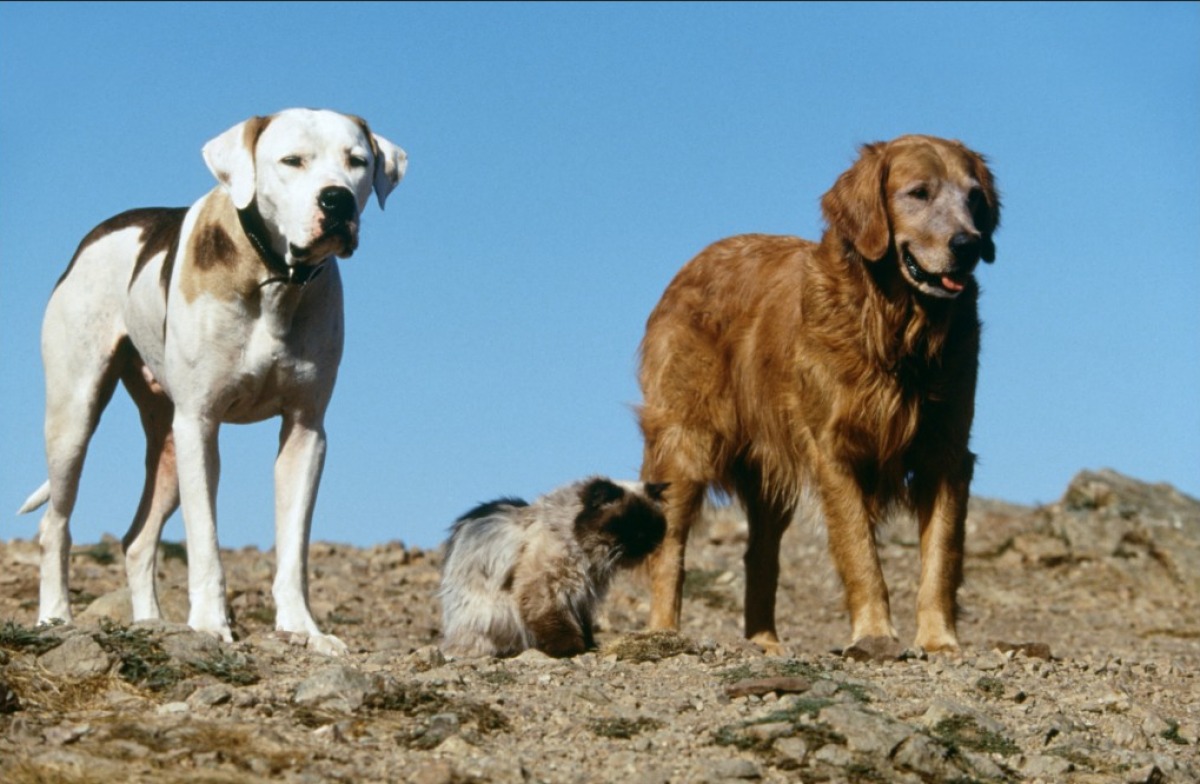 1. Every time Sassy is a snooty, uptight bitch, drink.

3. Laugh and drink whenever humans and animals try to communicate, or have a one-sided conversation (or so the humans think…!).

4. Whenever the weather changes, have a drink. So, like once for that massive storm.

5. Drink for every new mode of transportation.

7. Drink whenever the (true) mantra of Dogs Rule and Cats Drool is repeated.

12. Drink whenever you cry. 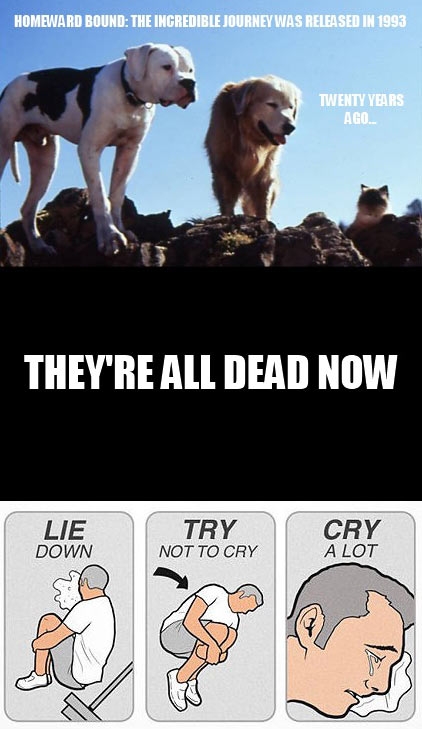