If you want to look for it, the world is a pretty awful place.

That’s not meant to be depressing; there are many wonderful and inspiring things all around us. But there are also terrible tragedies and sickening atrocities that could fill up our entire days if we dwelled upon them. So for the most part, we don’t dwell on them. We pay attention to only some of the sadness around us, and allow ourselves to fully feel that sadness even more rarely. Part of this is a defense mechanism. If we allowed ourselves to truly experience the full brunt of human misery, it would overwhelm us.

But while the world may be dark, the darkness has a purpose.

The core story of Moore’s run was “American Gothic.” Moore has a slew of great works in his bibliography, and it’s hard to argue that Watchmen, the sole graphic novel on TIME’s list of the 100 greatest novels since 1923, belongs anywhere but at the top. But “American Gothic” stands side-by-side with the greatest of the rest of the Alan Moore Pantheon, joining the likes of V for Vendetta, The Killing Joke, and From Hell as some of Moore’s finest work.

And “American Gothic” is all about the darkness of the human experience, and what purpose such darkness must have. Moore drags you through the depths of evil so that you may experience a message of hope. It’s a storyline that features Moore taking the concept of a horror comic and imbuing it with never-before-seen meaning.

As I mentioned in the first installment, SWAMP THING was the first mainstream comic book to completely abandon the approval of the Comics Code Authority. It’s hard to overstate how impactful this decision was. Comics had been growing steadily more mature before Moore took over SWAMP THING, but it took a transcendent mature title, which Moore’s run definitely was, to really culminate this progress. Moore’s successes on the first book without the Code led to comic book publishers taking greater chances with mature subjects. In 1993, DC would launch its mature Vertigo line, which has hosted some of the best creative works in the industry since.

Today, Moore’s version of Swamp Thing would almost certainly be a Vertigo title, but it was for the best that the line didn’t exist yet. DC has recently been pushing to re-integrate certain Vertigo characters into the main DC Universe, but for years, many Vertigo creations stood apart and rarely interacted with DCU mainstays. Moore’s SWAMP THING was very much a part of the DCU, which allowed him to set “American Gothic” and the rest of his run very much into continuity. “American Gothic” builds off the events of CRISIS ON INFINITE EARTHS and uses nearly every major magical character in the DCU; Moore writes them all wonderfully, particularly Etrigan and the Phantom Stranger. But he never loses sight of Swamp Thing himself, and the uniqueness of the character and the aspects he brings that no one else possesses. 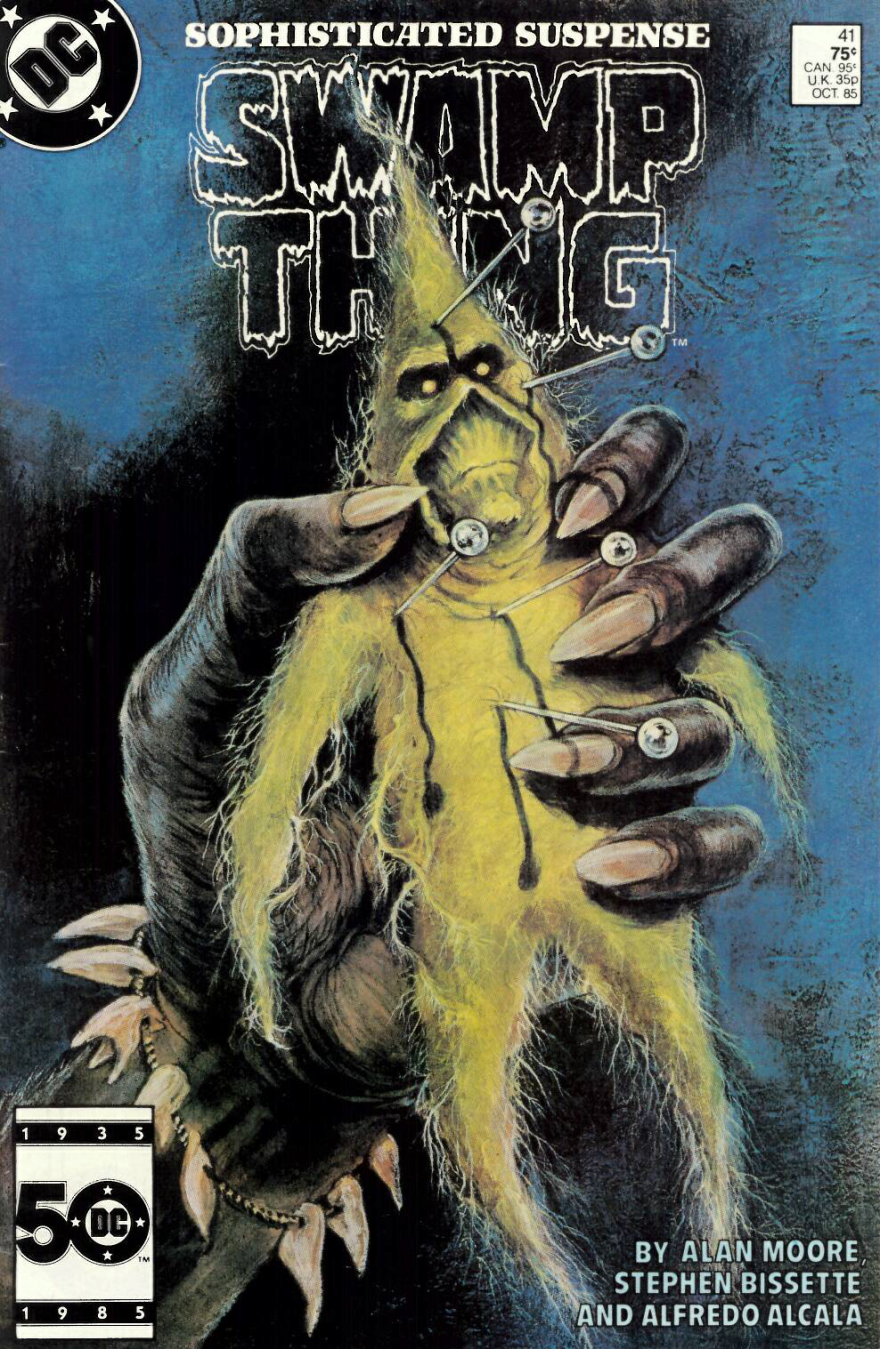 The story begins by following Swamp Thing as he journeys around America, facing various supernatural threats while learning his own true nature. The stakes rise as the story progresses and the focus shifts between Swamp Thing learning about himself to learning the true nature of evil itself. Moore aimed high when taking on the idea of evil; the entity at the core of “American Gothic” is referred to variously as the Original Darkness, the Great Evil Beast, or just the entity: the shadowy opposite of The Presence (DC’s representation of the divine creator), and the embodiment of all darkness from before creation. This darkness is awoken and searches for its own nature and place within creation in a way that mirrors Swamp Thing’s own search, but on a cosmic scale. It all leads up to one climactic confrontation with all of existence at stake.

Along the way, we get prime examples of two things I mentioned in previous installments: the immersive horror of Moore’s world, and the way he toys with readers’ expectations. In a two-part story, he does his only vampire tale. But while vampires are a staple of horror books, Moore manages to use a vampire premise that I’ve never seen before — and as overdone as vampires have been in recent years, one I’m amazed I’ve never seen since. Another two-parter takes on Southern racism in a way that uses the supernatural to depict the real-life horror of slavery. Moore makes you feel his horrors throughout the run, but in “American Gothic,” he does his best job of making you feel there’s a point to all that horror.

“American Gothic” is often heavier on philosophy than action as it gets nearer its conclusion, taking on theology and mythology from the confines of a superhero world. The story begins as a series of isolated events, then increasingly connects the pieces and builds the suspense as the scope becomes more and more epic. The suspense builds to a fever pitch, with an ending that can feel almost anticlimactic on the first read. I think that’s the drawback to such an ambitiously metaphysical storyline. Like I talked about previously, we’re conditioned to expect certain patterns in a comic book, so when the climax is not a conclusive punch, but rather a philosophical treatise, it might be natural struggle to adapt to our unmet expectations. But upon further examination, I think the blame for any disappointment over the ending to “American Gothic” lies more with the reader than the story. Moore’s SWAMP THING challenges us to rethink what a comic book is and should be, as he attempts to take us to heights the medium has rarely, if ever, seen. If those heights are too unfamiliar for our comfort, then perhaps we need to be challenging ourselves more. I felt that slight tinge of unmet expectation when first reading “American Gothic” five years ago, but upon this reread, I was actually overwhelmed by how powerful I felt the conclusion to be.

Key to the “American Gothic” story is Moore’s creation of a mysterious new character who becomes Swamp Thing’s cryptic guide on his journey: John Constantine. Constantine went on to star in Hellblazer, the longest-running series in the history of DC’s Vertigo line (though that book began before Vertigo was launched), but I hadn’t realized until I first read this run that he was created in Moore’s SWAMP THING. Visually, he was born out of a desire by artists Stephen Bissette and John Totleben, both fans of the band The Police, to draw a character who looked like Sting. Constantine’s actual first appearance, though, was in an issue by guest artist (and later regular) Rick Veitch, who added an earring to Constantine’s Sting look.

I’ve never read much of Hellblazer, and I can’t call myself a leading Constantine expert. But in Swamp Thing, he is one of the best characters I’ve seen. Moore intentionally doesn’t give much background on Constantine, and he doesn’t need to give much. He’s an immediately likable, extremely entertaining and always intriguing character. After “American Gothic” was over, one reader wrote into the letters page with an insightful theory on who and what he thought Constantine was supposed to represent. The editor, Karen Berger, only responded that it was a solid theory but declined to reveal anything for sure either way. To me, this theory was a light bulb flashing on as to the next-level brilliance of the character. 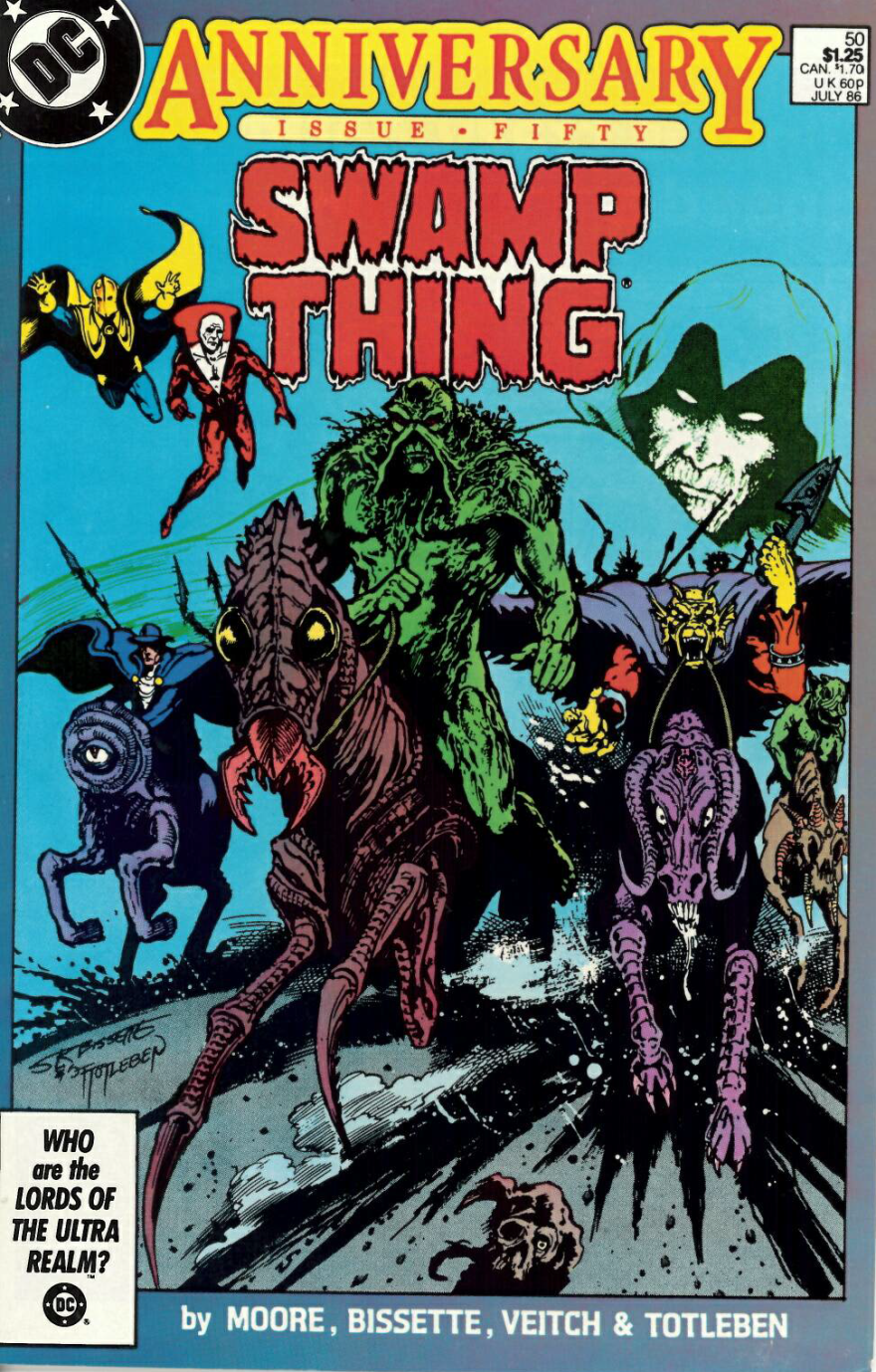 The theory? Constantine was a stand-in for Jesus Christ, or for God, or for some aspect thereof. Wherever else the character of Constantine has gone since, and whatever else he has become under different writers, I think this theory holds up in his first story, here in Moore’s SWAMP THING. I don’t know whether Moore was originally set on creating a Christ-like figure for the book; Moore pretty candidly admitted around the time of Constantine’s creation that he had just been trying to fulfill his artists’ desire to draw Sting. But he also stated around that same time that “it’s turning into something more than that now.” It’s possible that Moore was merely referring to Constantine’s increased importance in the “American Gothic” storyline. Moore did say in subsequent interviews how he liked having a character who seemed to know everything and everyone in the world of magic, but unlike most mystics, wasn’t an elderly character; certainly, Constantine’s street knowledge, rock-star demeanor, and overwhelming charm separated him from the pack and helped him become an enduring character to this day.

But Moore is an extremely intelligent and well-read man, and I don’t believe it is coincidence that he created this character with the initials J.C., or whose name has such Christian roots (John is the name of Christ’s “favorite” disciple, as well as the name of the man who baptized Christ, and Constantine was the first Christian emperor of Rome). As the aforementioned letter writer pointed out, there is literary tradition of using characters with the initials of J.C. as a Jesus Christ-like stand-in — most famously, the character Jim Casy in John Steinbeck’s classic, THE GRAPES OF WRATH. Sure, Constantine chain-smokes and swears and is regarded as a miserable cur by most of those who know him. But compare him to Jim Casy, a character that a wide consensus of critics accepts as a Christ-like stand-like. Casy was a sinner himself, disgraced in the eyes of mainstream religion. But Casy is still the moral center of the novel, guiding characters toward better ways of life.

Constantine plays a similar role, guiding Swamp Thing through the moral crises of “American Gothic” and helping him realize the bigger pictures of good and evil. (I’ll omit additional clues that the letter writer pointed out, to avoid excessive spoilers.) Moore himself might be best described as an occultist when it comes to religion, but he’s still shown an appreciation for Christian archetypes and imagery in some of his works. I don’t think any Christian beliefs by the author are needed for this J.C. usage, nor by the reader to appreciate it. Using Constantine as a Christ-like stand-in in the Jim Casy vein — a flawed person, set apart from mainstream religion, who nevertheless has the guiding center that another character needs — simply adds to mythology of this already highly theological story. It’s as if divinity itself is trying to snuff out these horrors. I buy into the theory, and I think reading Constantine’s appearances in Moore’s run that way makes the character all the more impactful with an added literary depth.

Regardless, Constantine a wonderful scene-stealer every time he appears, and he tied together “American Gothic” with wit and depth. The story itself plays out as a treatise on the light and darkness of the world, and how the sum of their contrast means more to our existence than either could separately.

NEXT WEEK: Lost in space, and a conclusion