Welcome to the Binge Project series! These Binge Projects will feature me reading or watching an entire run of comics, books, TV shows, or other media in rapid order, then writing expansively about the experience. This installment takes an in-depth look at Alan Moore’s Swamp Thing. Moore’s run covered issues 20-64 and Annual #2, originally running from January 1984 to September 1987. 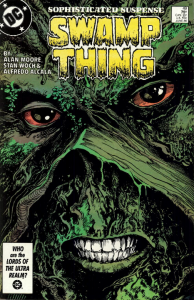 For me, it used to always be the slasher flicks I was exposed to during my teen years. I had friends who loved that stuff, and growing up, I just loved to fit in. So I sat through gore-fest after gore-fest, various and sundry films about serial killers and the inevitably sexy teenagers they always seemed to kill. And I hated it. The killers rarely had much motivation for these epic murder sprees, and the suspense revolved solely around which corner the psycho would jump out from, how loud the fledgling actress could scream before dying, and how much blood the director could show.

So for many years, this was horror in my mind, as the slasher flicks that dominate much of the genre became synonymous with the genre itself. But the truth is, I was naïve. There’s real horror out there, and it’s a different animal entirely.

Horror is the revelation that your entire existence has been a lie. Horror is deep-seated hatreds that literally won’t stay buried. Horror is in the autistic boy who can’t articulate the terrors that take him in the night. It’s on the face of a man who realizes he’s accidentally poisoned his wife and unborn child. It’s in knowing that your mistake has doomed a community, and your action will destroy another. It’s a disturbing concept, a well-crafted shock, intensified suspense, the fears that lurk in our subconscious. And horror is everywhere in Alan Moore’s SWAMP THING.

If you read Moore’s run, and really let yourself surrender to it, chances are you’ll reach a point where the horror slithers inside you. The writing is so good, and the stories so intense, that some issue will grab you thoroughly, make you reluctant to keep reading while refusing to let itself be put down. When I reached that point, I literally screamed.

Five years ago, I sat down to read Alan Moore’s SWAMP THING for the first time. I then wrote the original version of this Binge Project, for a small blog with three writers who doubled as the only three readers. I’ve recently finished my first reread of the run since then, and am updating and expanding on my thoughts. But one moment of that first dive into Moore’s creations still remains salient: my scream.

It was a midsummer night, back when I was doing my undergrad at Oklahoma State. I had recently moved into a three-level house with several friends, but I was alone on the top level at the time. I think I had been reading SWAMP THING for a few hours straight, and it was late. The time of night when fears amplify and come alive.

What do I fear? Butterflies.

Really, bugs of any kind scare me, but butterflies are the example that best shows how ridiculous my fears are. Beautiful creatures, revered by many, and I jump every time I’m near one. So if I scare that easily, you can only imagine what a truly good horror story does to me.

Enter Alan Moore. Moore is widely regarded as one of the greatest comic book writers ever, mostly because of his works in the 80s and early 90s. When Moore was at the apex of his literary powers, he possessed a gift for immersion: to read one of his best stories is to lose yourself within it. So when Moore did horror, it was only natural to get lost in the horror of his mind and the tales it spun.

Moore’s SWAMP THING was groundbreaking for its time. Moore had a dark imagination and knew how to use it. His issues took intelligent stabs at horror and didn’t shy from the darkness he exposed. By issue #29, SWAMP THING had become too edgy to get approval from the Comic Code Authority; fortunately, rather than neuter the book by forcing Moore to tone it down, DC decided to stop submitting the series to the Comics Code Authority and move along without approval — the first mainstream book to completely abandon the Code. DC started running the tagline “sophisticated suspense” on the covers in an effort to let readers know the book was a mature title. (Around the same time, they also shortened the title from its original Saga of the Swamp Thing to the simpler Swamp Thing; I’ll be using only the latter to refer to the book, for simplicity’s sake.) It wasn’t until Moore’s final few issues on the title that the phrase “For Mature Readers” started appearing on covers, but it was always a mature read. That “sophisticated suspense” phrase is about as apt of a description as you’ll find. There is a lot of violence and some gore, but what’s really horrifying about Moore’s Swamp Thing is the way its disturbing stories and themes crawl under your skin and stay there.

When brings us back to my scream. There may have been extenuating circumstances. I was tired, slightly on edge, and sitting alone in my room, wrapped up in a story that was both captivating and deeply disturbing to me.

And that was when a fucking butterfly landed on the issue I was reading.

Roughly three seconds later, I was down the stairs to our living room. I surrendered my room to the butterfly; that territory belonged to him now, having conquered me fair and square. At some point, I even remembered to start breathing again. The moral of that story now is probably the power that Moore’s horror stories had over me, with just a small assist from my own petty phobia. By that point it was clear: the Swamp Thing himself had seeped into my blood. He wouldn’t be leaving any time soon. 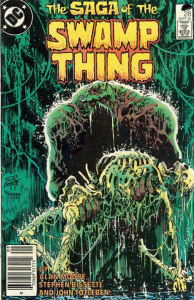 But I get ahead of myself. What Moore accomplished on Swamp Thing is impressive regardless, but perhaps even more so when you consider how his run started.

Moore’s first issue, #20, was the conclusion to the final story of the previous creative team’s run. I cannot think of another time when I’ve seen a writer have to wrap up so many loose ends when  starting his run; usually, an outgoing writer tries (or the editor mandates he try) to tie up most dangling plot points to give the incoming creative team something close to a blank slate. In recent years, many editors seem to even give a new creative team heavy license to ignore most of what the old team did. But Moore took considerable care. He had no use for nearly the entire supporting cast that previous writer Martin Pasko had built up, but he still tried to give the previous chapter in the book’s history a fitting end. From that end, Moore started his own logical progression. He would find creative ways to link his reimagined book to its older stories as his run went on.

Then, of course, Moore did make serious changes. Issue #21, “The Anatomy Lesson,” quickly altered the status quo for the title character, and did so in as complete of fashion imaginable. The book and character underwent a thorough 180, and things were never the same.

The original origin story of the Swamp Thing was that scientist Alec Holland ran into a swamp after suffering injuries from an explosion, and was mutated into the Swamp Thing. It was classic comic book logic, in the same way that lightning once gave the Flash super speed, or going to space gave the Fantastic Four their various powers; that is to say, it made no sense at all, but the reader understood to just accept the premise and move on to the good stuff. Moore obliterated that backstory. In his reimagining, Holland died in that swamp, and the vegetative entity known as Swamp Thing merely had Holland’s memories imprinted upon it as it awoke into consciousness.

The change is no small one. First there is the toll this information takes on Swamp Thing, as he realizes who and what he really is, from his violent reprisal in “The Anatomy Lesson” to his gradual acceptance. But beyond that, it shifts the entire paradigm of the series. No longer is SWAMP THING a book about a man mutated into a monster, but rather, about a force of nature imprinted with the remnant of a man. The former hoped to one day regain his humanity. The latter looks upon humanity as an outsider, often with despair. Under Moore, SWAMP THING becomes an elemental epic about the basic forces beneath our feet, and the ways Earth itself reacts to the impurities of man and various supernatural forces.

The tonal differences immediately show up too. Although Moore elevated the prose to a higher-minded level in issue #20, it still felt like more of an adventure book to me. With #21, Moore unveiled his use of suspense and dread as he builds to the issue’s fateful conclusion. He begins with a sense of inevitability, then backs up to layer on each piece of his puzzle until the shocking final product is revealed. He plays with your perceptions of heroes and villains, killers and victims, until all of those lines are blurred into something frighteningly new. 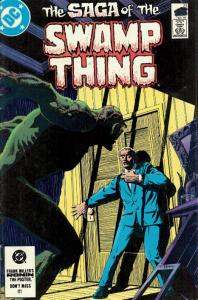 I’ve seen commentary suggest “The Anatomy Lesson” as not only as the finest issue of Moore’s run, but as the greatest DC comic book ever published. I’m not willing to go that far, but nor would I argue against it. “The Anatomy Lesson” pounds away at you in a way that cannot be ignored. When I reread it for this Binge Project, I suddenly realized I was literally on the edge of my seat — despite already knowing what happens. If you consider it to be Moore’s first real issue, then I would at least call it the finest first issue ever produced. I can’t imagine someone reading “The Anatomy Lesson” and then not being hooked for more of Moore’s run.

Was it indeed his best issue of the run? Honestly, it probably was. I’m not sure if it was necessarily my favorite issue, since I’m partial to the raised stakes that come at the end of his “American Gothic” epic. But it’s worth noting that SWAMP THING was Alan Moore’s first chance at a wide audience. He’d done some work for Marvel UK, but this was his first opportunity in the big leagues. Even then, it was a small shot. Wikipedia correctly notes that when Moore took over, SWAMP THING was “then a formulaic and poor-selling monster comic.” But it didn’t matter; it was a chance to make his mark.

Because we can now see Moore’s genius in reverse, it seems obvious that presented with that opportunity, Moore was of course going to do something bold and strikingly different. He was 30 years old at the time, and he had brilliance bottled up inside of him, waiting to be unleashed on the kind of audience DC could give him. If “The Anatomy Lesson” was his finest hour on SWAMP THING, it doesn’t mean that the rest of his run was diminished returns; it just means that he was ready to deliver his most groundbreaking contribution from the start.

NEXT WEEK: Monsters in love