Welcome to the Binge Project series! These Binge Projects will feature me reading or watching an entire run of comics, books, TV shows, or other media in rapid order, then writing expansively about the experience. This installment takes an in-depth look at Alan Moore’s Swamp Thing. Moore’s run covered issues 20-64 and Annual #2, originally running from January 1984 to September 1987. Click here for Part 1. Click here for Part 2.

Now, to close out the first half of  this Binge Project, I’m going to break things up a little and present the following Intermission: The Top Five best things about these SWAMP THING issues … other than the actual content.

I bought Moore’s 46-issue run on eBay in the original comics. DC has done some very nice collections of the run, which might be preferable in some ways: they’re likely restored, where my nearly 30-year-old issues are sometimes faded, and the paper quality is surely better than the 80’s fare. But one fun part about reading them in their original form, instead of trades, is getting to see all the original ads, content, and miscellaneous bonuses. Here are some of the best of what I found:

5. A glimpse at contemporary books: One of the cool things about taking a trip to 25-30 years in the past is that you can watch history unfolding. As always, the company advertised all its new releases, some of which were so bizarre or ill-conceived that they were probably canceled swiftly and never thought of again until I saw the ad. Others, like Marv Wolfman’s Teen Titans, were destined to be remembered as classics. In each case, it was fun for me to think about how effective the promos were and whether I would have bought the advertised book if I’d been reading when it first came out. One ad stood out above the others, largely because of its destined lore. When Moore was already more than a year into his run, the then-biggest story in comics history was just starting. Issue #34′s full-page ad with the shadowy outline of the Monitor announced the coming storm: 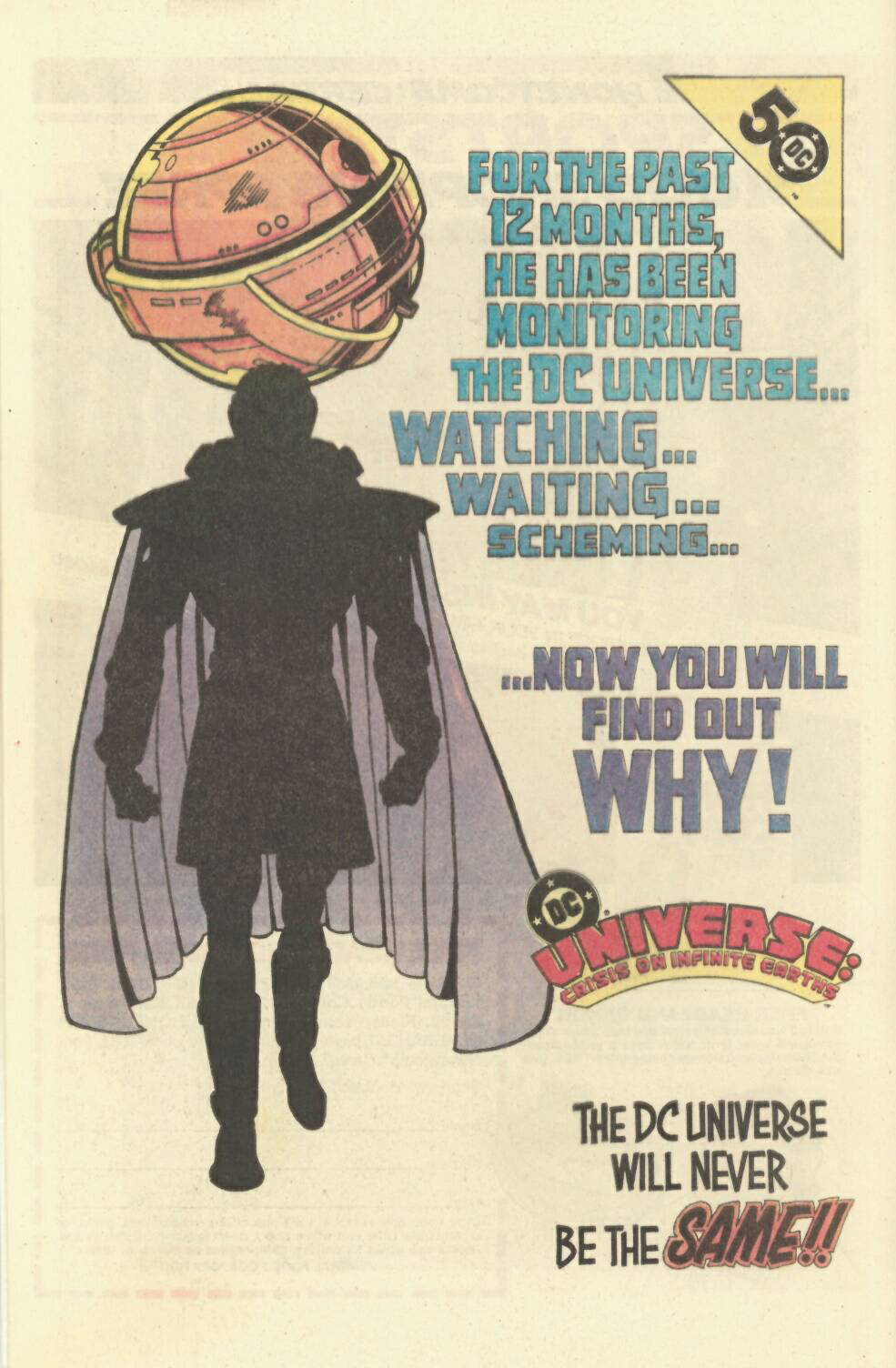 As the months go on, there are a couple other ads for Crisis, but I don’t think DC had to pimp it too much; the event was already huge enough. Swamp Thing would have its own Crisis tie-in in issue #46, as the main crossover was nearing completion, and it was perfectly executed. Moreover, Moore tied the biggest conflict of his run into CRISIS aftermath, managing to somehow raise the stakes even further beyond the crossover.

4. The birth of obesity: If you want to know how America became by far the fattest nation on earth, look no further than an ad for Oreo in issue #31. In a black-and-white drawing of a kid in a living room, there are small Oreos hidden all around the room. And I do mean everywhere. The ad encourages you to try to count them all, then eat as many as you find. The answer at the bottom of the page reveals there are 62 Oreos!!! Yes children, after you’ve completed this arbitrary task, please eat 62 Oreos so you can go ahead and knock out your allotted caloric intake for the next year. My god, I do like Oreos, but I think I got diabetes just looking at that ad.

3. Lost science: Comics used to have what was essentially a classified page, usually containing a body building ad, some comic collecting services, then random shit. I could have made this entire list from just those. But one of the best came in issue #25, when a true scientific breakthrough was announced in a small square-inch ad: “X-Ray Glasses: Apparently see bones thru skin, see thru clothes! Regular size glasses with built-in optical illusion. $1.98.” Are you shitting me? They invented x-ray glasses in 1984?! Where did these go? Can you still find them? And why the fuck would you only charge two bucks for technology this powerful?

2. NBC Saturday Morning: This two-page ad from Annual #2 is so good it should probably be No. 1. 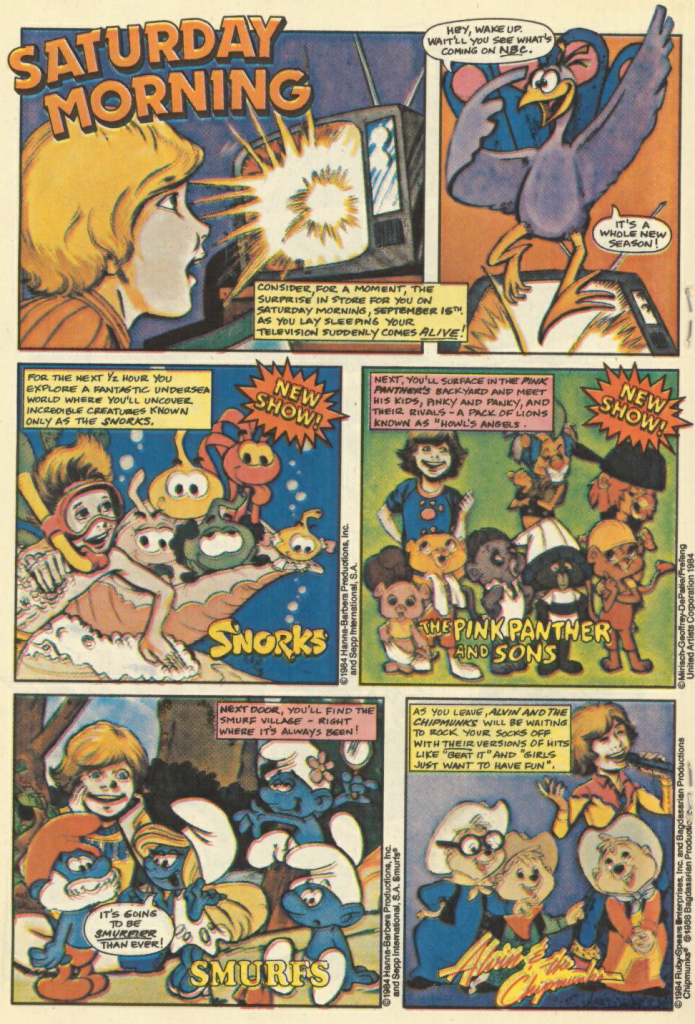 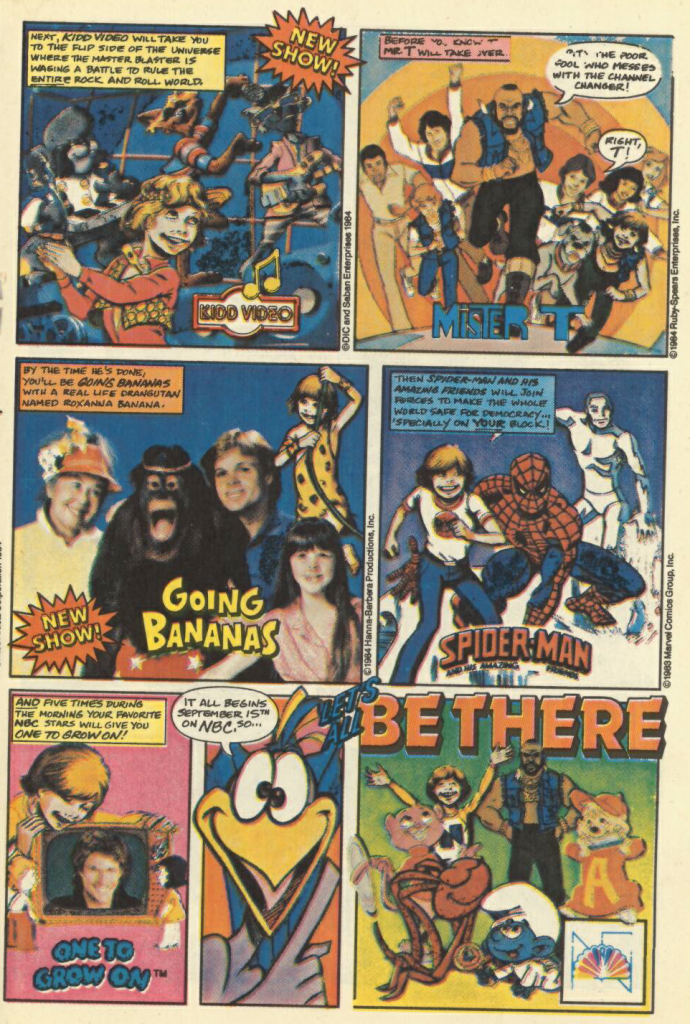 Eight cartoons, and they look like they were all classics, from Snorks to The Pink Panther and Sons. You also had Spider-Man and His Amazing Friends, which I’ve actually seen, with characters that “will join forces to make the whole world safe for democracy… ‘specially on your block!” Whew, democracy (and my block!) really caught a break there. There’s Smurfs, which Smurfette promises is “going to be smurfier than ever!” Which is incredible, because I was just saying last week that it couldn’t get any smurfier than this. And of course, there’s Alvin and the Chipmunks, who “will be waiting to rock your socks off with their versions of hits like ‘Beat It’ and ‘Girls Just Want to Have Fun’!” I bet being a kid in the early 80’s meant a song wasn’t real to you until you heard Alvin’s version.

But all of those pale in comparison to the second cartoon in the Saturday morning lineup: MISTER T. And what does cartoon Mister T say? “Pity the poor fool who messes with the channel changer!” Apparently Mister T couldn’t think of the word “remote”? Still, sweet Jesus, there was a Mister T cartoon? I’m even more upset that I didn’t know about this than I was about the x-ray glasses. My only significant goal in life now is to see an episode before I die.

1. Swamp Things: The title of the letters page, and that page is well worth the time to check out. We can make asses of ourselves on the Internet in our comics postings, but many of these letters reveal how comics criticism seems to have been — if not an art, at least something to take seriously. I didn’t read every letter throughout the run, but I at least scanned every letters page and would delve into the more intriguing points that were raised. There were some highly intelligent criticisms and compliments. Sure, even then, there were still the short “Love this book! Keep up the good work!” type of letters. But there are many others that make you think, including one I’ll delve into in great detail when we resume the regular installments next week in Part 3.

But to give a different example now, take the responses to issue #40, an issue where Moore dove into sensitive gender issues using a werewolf and a controversial ending. Although Moore’s point was extremely pro-woman, his execution was arguably flawed in the story. For issue #47, a woman wrote a lengthy, pointedly critical response that DC not only published, but Moore himself replied to in his own lengthy, intellectually honest justification. Both her letter and his response weren’t attacking at all, but well-reasoned throughout and thought-provoking. It’s a fascinating addition to the run.