The UK has been the stomping ground for some of the best science fiction the world has to offer. A CLOCKWORK ORANGE, V FOR VENDETTA, THE HITCHHIKER’S GUIDE TO THE GALAXY, RED DWARF, H.G. Wells’ TIME MACHINE, WAR OF THE WORLDS and INVISIBLE MAN, and of course DOCTOR WHO. Probably nothing in the genre is more profound or influential than Aldous Huxley’s BRAVE NEW WORLD, as every sci-fi movie features shades of that classic. The UK science fiction film THE MACHINE seeks to join the ranks.

THE MACHINE has whispers of Huxley’s influence, of course, but really, most of its inspiration comes from Ridley Scott’s BLADE RUNNER (adapted from Philip K. Dick’s landmark short story, “Do Androids Dream of Electric Sheep?”). THE MACHINE, written and directed by Caradog W. James (LITTLE WHITE LIES), posits a future where a Cold War with China has steeped western civilization into the deepest recession in history. Instead of a space race, or an arms race, the world is embroiled in a contest to create the first fully self-aware artificial intelligence. Enter brilliant computer programmer Vincent (BLACK SAILS’ Toby Stephens), under contract for the Ministry of Defence, trying to do just that. 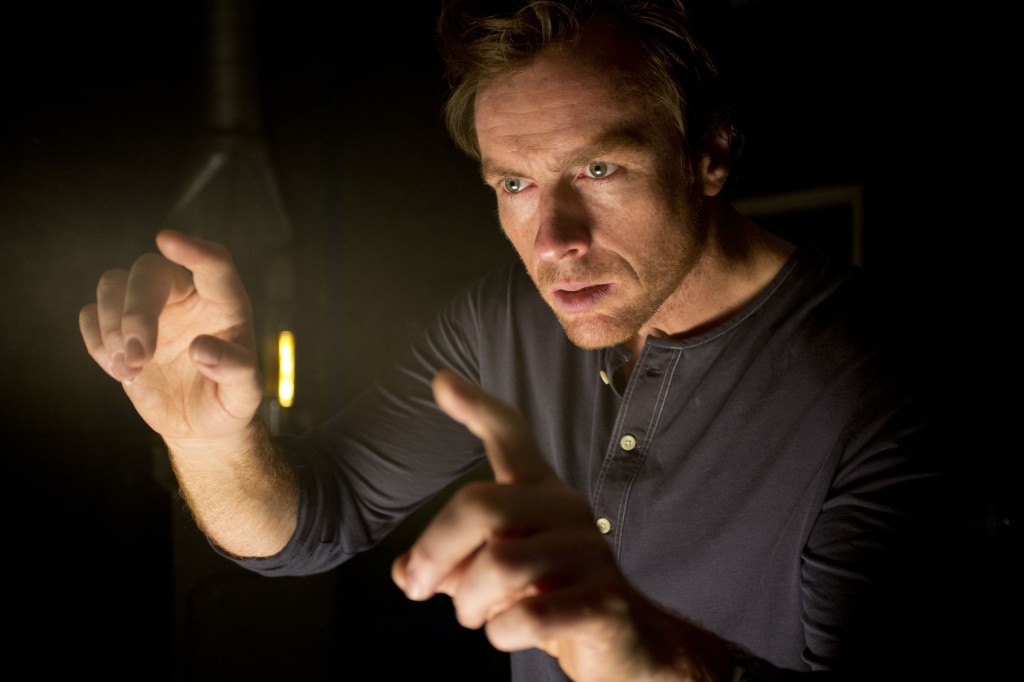 We’ve gone down this road many times in the annals of sci-fi, but thankfully, THE MACHINE has a few new wrinkles and a slightly different take on the outcome.

Vincent is posited as a genius, and the only evidence we see of that is his frequent usage of the Turing Test, an experiment to determine whether a machine exhibits intelligent behavior. It isn’t until he stumbles upon Ava’s work, an American computer programmer whose program comes the closest to passing the Turing Test of anyone he’s administered, that they’re able to fashion a machine that (who?) is self-aware.

Before Ava comes on board to work for Vincent, we see many of the failed trials, as one android responds murderously to his line of questions, killing his poor assistant. It seems Vincent is blind to the dangers, and might be just as evil as his superiors, represented by Thomson (the excellently understated Denis Lawson, AKA WEDGE ANTILLES!!!). But really, he made a deal with the devil in order to save Mary’s life, his mentally handicapped daughter, who suffers from Red Syndrome. In artificial intelligence, he sees an avenue to repair the damage done to her brain, and allow her to outlive her frail and failing body.

Vincent has saved many lives through his experiments, repairing their war-addled brains with implants, but the survivors become mute afterwards, and merely used as guards around the base. It’s clear that these mute Implant guards have a portentous plot up their sleeves, especially when you take a peek at Thomson’s aide Suri (above, Pooneh Hajimohammadi) and the lot speak in some unique language of their own making on the sly. Plus, the bald and scarred guards look far too cool to just be set dressing.

Vincent doesn’t ask any questions of Thomson and the MoD, but Ava (ARROW’s Caity Lotz) is different/a normal inquisitive person. James (RESURRECTION’s Sam Hazeldine), a “patient,” secretly warns her that he’s being held captive, and that she must flee. Next thing you know, Thomson has orchestrated Ava’s murder. Because Vincent and Ava have “fallen in love” (?), and let’s be honest Vincent is a little creepy, when he activates Quantum, the first self-aware machine, he models her/it after Ava. 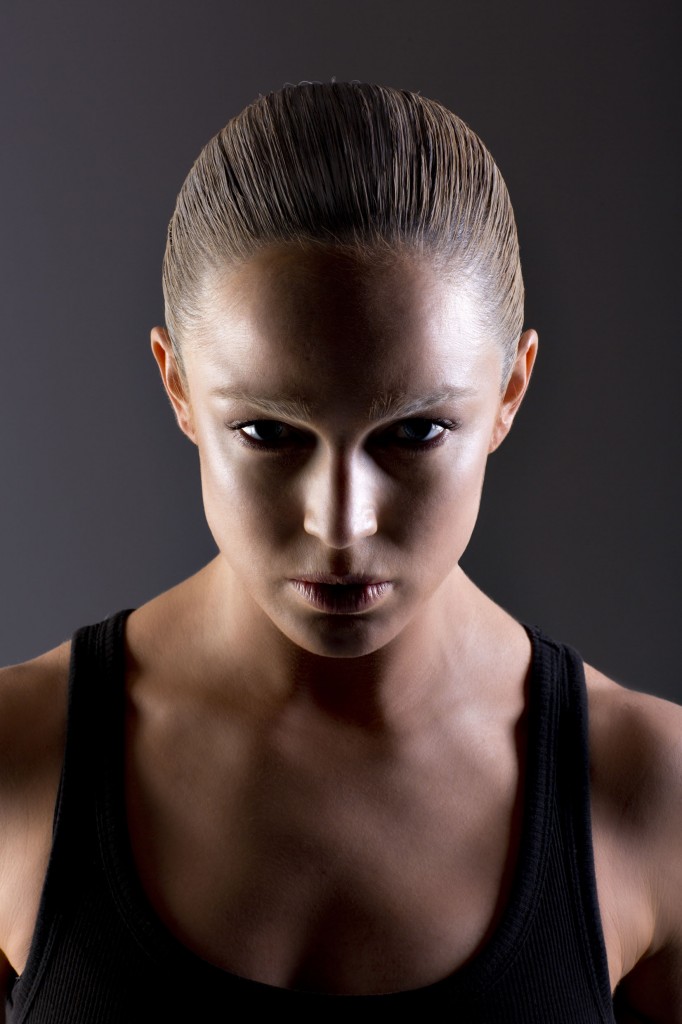 Through her work on ARROW as the Canary, Caity Lotz has quickly established herself as one of the most physical and badass young actresses in Hollywood. That reputation only grows with THE MACHINE, as she plays a wide eyed, loving and conscientious, but unsettling and dangerous machine capable of almost anything. Lotz toes the line between creepy and endearing quite well in the role, necessary because we never know what she’s truly thinking (or if she’s capable of such wide ranging thought).

In Ava, Vincent sees the future, as Thomson merely sees a weapon that can turn the tide in an all-out war that’s brewing. The two jockey for the Machine’s allegiances, each training them differently and separately, until they finally reach a crescendo of conflict by the end, as Vincent finally rages against the real Machine, the government. 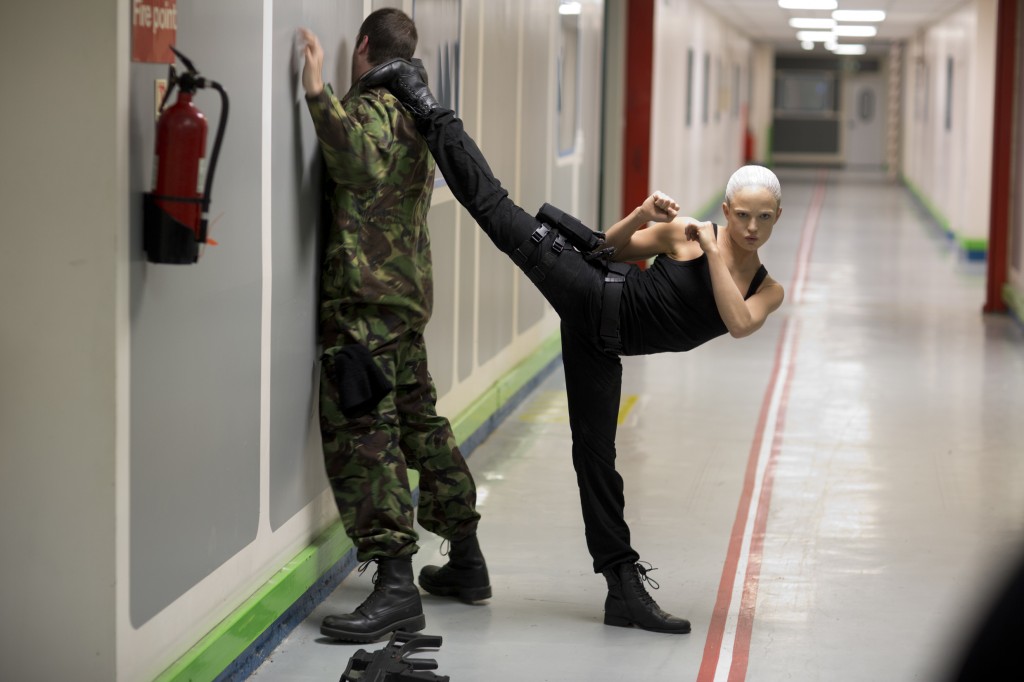 I loved the idea of a Cold War with China, and a race for intelligent machines, and wished we got more of a glimpse into this dystopian future. Instead, we’re almost primarily stuck in the dark, dank confines of Vincent’s lab and the shadowy MoD station.

THE MACHINE reiterates the dangers of artificial intelligence, but mostly harps on the evils of government and control, and the potential that self-aware machines have, and what amazing things the technology could accomplish. Its message is hardly revolutionary, or new, but thanks to Caity Lotz’s convincing turn as the titular android, the Implants, and some cool visuals and flairs, THE MACHINE is a worthy sci-fi entry from Caradog W. James and company.

THE MACHINE is available on iTunes VOD now, and arrives in theatres on April 25th. 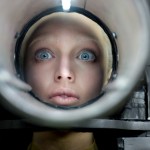 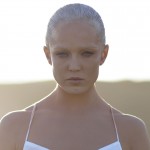 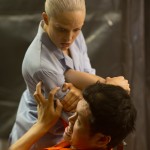 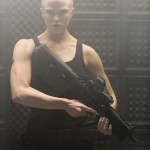 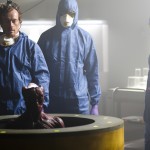 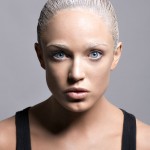