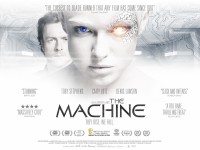 The UK has been the stomping ground for some of the best science fiction the world has to offer. A CLOCKWORK ORANGE, V FOR VENDETTA, THE HITCHHIKER’S GUIDE TO THE GALAXY, RED DWARF, H.G. Wells’ TIME MACHINE, WAR OF THE WORLDS and INVISIBLE MAN, and of course DOCTOR WHO. Probably … Get hard