The best way to get to know a person, aside from a round of naked Balderdash, is to learn what kind of movies (and TV) they love. Not just what they like (“I’m fond of romantic comedies” said every bland date ever), but what they truly love, what they watch over and over again, their guilty pleasures, what movies are important to them or signify something about themselves, or their life. We know that movies are more than just a way of wasting time and getting older without thinking about that fact. To misquote a movie on this forthcoming list, movies are life…but they aren’t just life, oftentimes THEY’RE BETTER. Fantasies, nightmares, reassurances unfolding before you, whatever the case may be…movies are an escape from reality, a best friend offering their hand and asking you to go on an adventure.

Every time, your answer should be fuck yes.

What follows is my way of introduction to ye faithful reader(s). Rather than inundating you with vague autobiographical information, I thought I’d let you discover my life through movies, by sharing seven of my absolute favorite childhood movies. While none of these is my favorite movie (since I can remember, BACK TO THE FUTURE has been my answer to that question, but GALAXY QUEST is closing in), and I’ve seen so many mind blowing movies that have changed my life or inspired me since, movies just have a bigger impact on you when you’re younger. Movies are more pure precisely because you are, as you haven’t yet left Neverland and grown up, and aren’t yet saddled with life’s expectations and complications. In many ways, I’m still the same kid who yearns to be the manager of a professional baseball team rather than endure the pressure of actual playing, like in LITTLE BIG LEAGUE, or the alienated monster kid who longs to be a part of Scooby’s gang in SCOOBY DOO AND THE GHOUL SCHOOL.

Before I was too cool to spend New Year’s Eve with my parents, my sister and I used to watch movies until midnight with the folks, back when that was a big deal. The first year we started this tradition (I don’t know exactly how old I was), my Mom put her foot down (she was steppin’ in time) and made us watch MARY POPPINS. I, of course, was resistant to something that sounded so girly and silly and stupid. This was before I would embrace my wacky self, and my feminine side, and many a movie that’s frowned upon by insecure dudes and “grown up” men and women. Now, I’m all for it, and this classic live-action (with some animation) musical with Julie Andrews and Dick Van Dyke was a big reason for that.

Each song is beautiful, from the protest-power song of “Sister Suffragette” that fit in with the socially conscious 60’s era even if the film itself took place when women were fighting for the right to vote (while still painfully subservient to their dopey husbands like Mrs. Banks), to the pop cultural might of “Supercalifragilisticexpialidocius.” Yeah, because of that song’s greatness (and my current obsession with the soundtrack on Spotify) I could spell that without consulting Google. There’s “Spoonful of Sugar,” which is one of three songs that actually do make chores more bearable (if only the truism “in every job that must be done there is an element of fun” was true). The dreary and touching “Feed the Birds” is as manipulative as a Sarah MacLaughlan puppy ad, but no less effective.

It’s a film that has a classic joke that doesn’t make sense to any but English majors (least of all children) yet is still hilarious: “My friend said he knew a man with a wooden leg named Smith. So I asked him, ‘What was the name of his other leg?'” Misplaced modifier humor: what gets better than that?!

The film not only gives us animated singing and dancing animals, a chaste but no less dreamy love story between Bert and Mary, but is a socially conscious picture that empowers women (somewhat), and perhaps its finest achievement is chronicling the development of Mr. Banks from the gruff, stern, responsible banker to lovable family man. For any young man with designs at a large future, try not to tremble at the opening lines of David Tomlinson’s finest moment, in “A Man Has Dreams”:

A man has dreams of walking with giantsTo carve his niche in the edifice of timeBefore the mortar of his zealHas a chance to congealThe cup is dashed from his lipsThe flame is snuffed aborningHe’s brought to rack and ruin in his prime.

It’s DEATH OF A SALESMAN in song.

Dick Van Dyke: dancer, beau, singer, comedian, actor…rapper? Just listen to his fast-talking singing at the end of “Jolly Holiday” and other moments sprinkled throughout this beautiful film. While the film is titled after Ms. Poppins, it’s Bert’s character that absolutely steals the show and grounds the narrative. He’s just an honest (and obscenely talented) man scraping to get by, but he’s somehow charmed the world’s luverly-iest woman, and in so doing, made it seem like Bert is the one out of Mary Poppins’ league. Bert should’ve ended the misplaced belief that the impoverished are poor because they’re lazy, as he works as a chimney sweep, artist and a one-man band.

It wasn’t until senior year of high school until I truly accepted who I was, and shared the weird to the world, and was no longer embarrassed that I read comics, or that I had never dated a girl. I think I’d be grasping at fate to intimate a legitimate connection between that leap than with Bert’s leaps across rooftops, but it’s clear he was a worthy role model all along, and perhaps that leap wouldn’t have been possible without Dick Van Dyke’s complete all-in with Bert. I oftentimes wish I had embraced the message proliferated by Bert sooner. Would I have taken up theatre? Would I have learned to read music, or to sing? I feel like that’s passed me by, or loses its luster after high school and college, but MARY POPPINS’ timelessness says otherwise. It’s never too late; a man has dreams, after all.

If you’re not whistling or clicking your heels by the end of the film, and inspired by the buoyant, jubilant ending number “Let’s Fly A Kite,” that is as touching a moment between a father and his children as any, then you’re a serious Grinch.

The film may border on the cartoonish, literally and figuratively, but it’s also real, as symbolized by Bert’s wonderfully simple line: “Life is a rum go, governor” in response to Mr. Banks’ turmoil before his enlightenment. Of course, it also glorifies poverty, displaying more happy, grimy chimney sweeps than have probably ever existed.

Further evidence that Dick Van Dyke is the most talented man in show business ever:

If you doubt the power and magic of this movie, click your heels to the following (admittedly bad quality) video of “Step in Time,” my favorite song from the film:

Recently, I watched this movie with a few of my friends, tailored a drinking game to its wondrous content, and ended the night trying and failing to emulate D-V-D on the dance floor. The experience informed my Halloween costume this year. 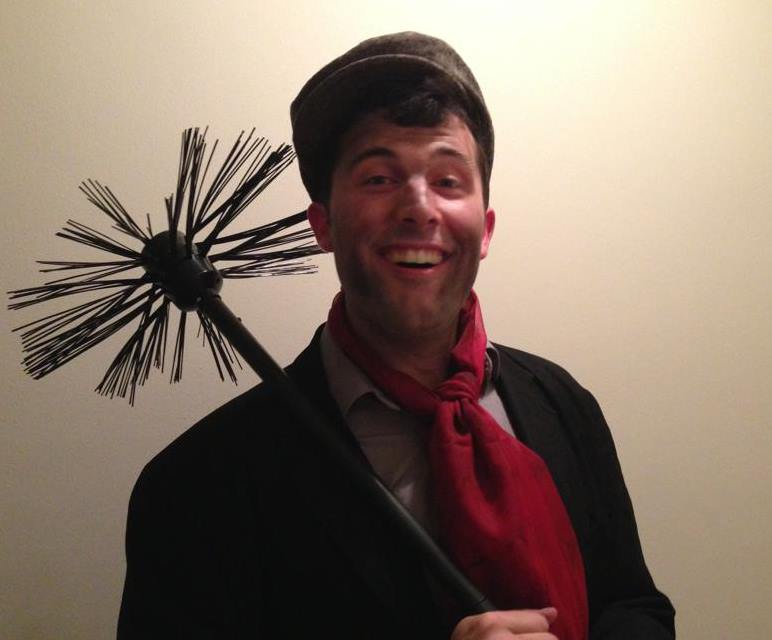 While I haven’t found the woman, that when I hold her hand, I feel so grand, and my heart starts beating like a big brass band, it’s remains a jolly holiday when you spend it with Mary. Chim chim-in-ey, chim chim-in-ey, I love you!

I have no idea why, but Karen Dotrice, who plays Jane Banks, terrifies me, for her role in the immortal cat film THREE LIVES OF THOMASINA. GODDAMN YOU THOMASINA.