Convention season is upon us (does it ever end?), and my first panel for the WonderCon extravaganza is for WGN’s Salem. I have no idea if people even get WGN, since as far as I know it is a Chicago-based network that airs Cubs games, but you’re not a television network if you’re not producing original content. My Grandmother produces original content.

You likely know as much about Salem as I do going into this. It’s a witch show with Shane West (Nikita, A Walk to Remember) set in 17th century Salem, MA. It’s already better than Secret Circle and whatever that recent Lifetime show was, because I said so. And because it has Fringe and Arrow star Seth Gabel in it.

The panel promises a sneak peek at the premiere of the new series, followed by a Q&A with star Shane West and executive producer Brannon Braga (known for Star Trek, Cosmos: A Space-Time Odyssey). As far as I know, the awesome Seth Gabel will not be present, though surprise guests aren’t foreign to conventions. I wouldn’t be against seeing Xander Berkeley, who was so good as a villainous werewolf on Being Human, either. Or Roxy Rebel, who plays a “pretty prostitute” in the show, according to IMDb.

ALSO, apparently a random audience member will win a background role in the show, and an all expenses paid trip to the set. Sweet.

We’re warned that the show is “mature,” and that we should leave if we can’t handle that. Psh. Apparently there’s even a section of the 25 MINUTE sneak peek that will just be a black screen, because it’s too disturbing. Titillating. There’s a baby in the row in front of me. Awesome.

And so it begins… 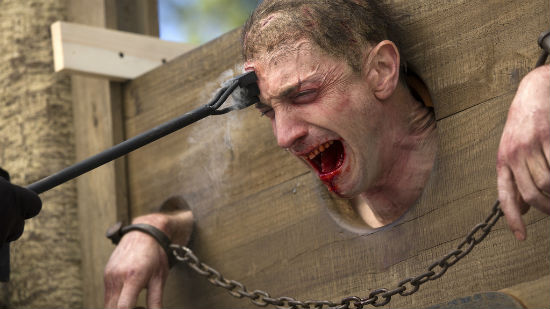 In a decrepit town square (read: any town square in the 17th century), are a young man and woman, who committed the “sin of self-pollution” because they kissed and…other naughty things. So they get “ten hard ones” (ie. lashes from a whip), are being sent to the stocks, and before that… get branded with a big fat “F” on their forehead, all ordered by the villainous George Sibley (Michael Mulheren). F is for fornicator.

A man calls out: “Do not judge unless ye be judged.” George demands to know who said that. “Jesus, you may have heard of him,” Shane West exclaims wryly, announcing his presence on the show. He’s John Alden, the hero of our tale. He also makes eyes at Mary (Janet Montgomery), and later, under the moonlight, are kissing and making vows to one another, right before he goes off to war. He claims it’ll only last a year, but we know better.

As John goes off to war, we learn that Mary is preggers, and in a town like this, that doesn’t bode well. So she goes off into the woods with a friend and have some occult-y ritual filled with visions of John, bloody/sappy trees, bugs and Sleepy Hollow-like horned demons. It’s trippy, and when it’s over, so is her pregnancy. She’s cured! 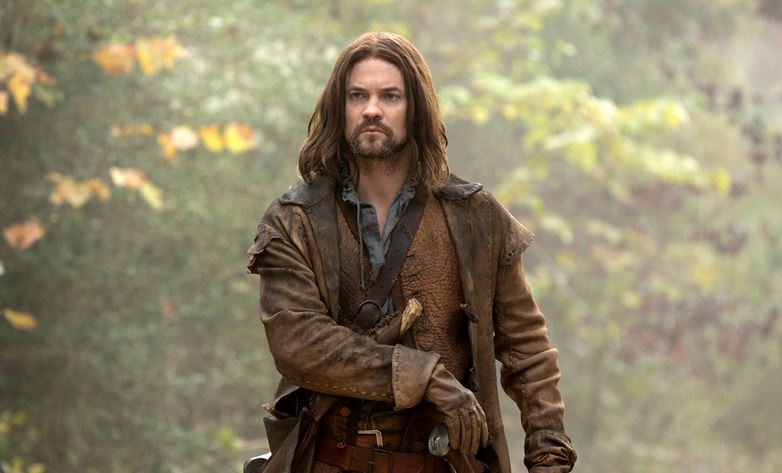 We pick up the narrative 7 years later, John Alden (above) returning to town, grizzled like crazy and possessing a lot more hair. As he saunters into Salem, he sees 3 hanged women. The witch hunt has begun.

He returns home to find his head at the end of the barrel of a gun. His father thought he was dead, and is clearly an old kooky man, because he has bags filled with wild not-quite-dead animals. He’s also played by John Locke’s evil Dad from LOST, so I can’t trust him with my kidneys ever.

A lot has changed in 7 years, as one would expect in a time when 7 years is like a third of your life expectancy. Mary, John’s no longer pregnant love, is now the richest woman in Salem, because she married John’s arch-nemesis, George Sibley.

Sibley is now an invalid, so good for Mary, though John doesn’t quite see it that way.

The man leading the witch hunt is Seth Gabel, a puritanical Reverend named Cotton Mather, with a famous father. John used to be friends with the man when he was a child, before he read every book on witchcraft (in 8 languages…oooh) and now has a sweet beard and crazy eyes. Mather enlists John and a couple other bar patrons to help him “subdue a girl.” That girl is Mercy, a crazed woman, seemingly possessed or haunted by a witch (she claims an old hag hangs over her, and is feeding on her, causing the innumerable wounds all over her body). Mather claims this is the work of a powerful witch, and John has the best line of the pilot (thus far): “I call bull$@&!.” Like us, he’s the skeptic, because he hasn’t been around to see the descent of Salem.

Of course, he doesn’t have the benefit of seeing the old hag attack Mercy, which is the first time the screen goes black. I almost like the idea of shows going dark right before evil things happen. Leaves it up to the imagination. Make believe plot points!

The next day, Mather presents a rousing sermon on the dangers of witches, that they can be any one of the townsfolk. Silver-haired Magistrate Hale (the aforementioned Xander Berkeley) is also wary of Mather, and stands up to him in church, advising against a witch hunt.

After the kerfuffle, Mary and John meet for the first time since he’s returned, and she invites him to a small dinner she’s arranging.

John goes for a drink, because what else is there to do in the 17th century? There, he calls out a creeper for watching him…and it’s Isaac the Fornicator from earlier. It’s clear that Iddo Goldberg is going to be a fan-favorite, after his introductory rant in which he essentially states that the town believes he’ll fornicate with everything, even a sheep.

Mather’s back with Mercy, the troubled woman. Her father can’t even watch, so she leaves the two alone, and then Mather begins to snake his hands up her dress…and we go to black again. Ew. It’s a long break this time around. Mather is up to no good.

As Mather exits, he meets up with John again, who repeats his “c’mon man, witches?!” speech.

Meanwhile, back at the Sibley residence, Mary is up to no good. It’s “feeding” time for her husband…which actually means getting naked, and removing a frog from his mouth, and using the frog to feed off some of her boils on her skin. It’s clear that she has George under a spell, and that the frog prevents him from speaking, and Mary’s a bit nutty, ecstatic that she’s stealing everything from his life, and even devouring his soul. In a mirror, we see her reflection: the gnarly old hag from before, who wouldn’t look out of place in Evil Dead.

And there you have it.

BACK TO THE PANEL! 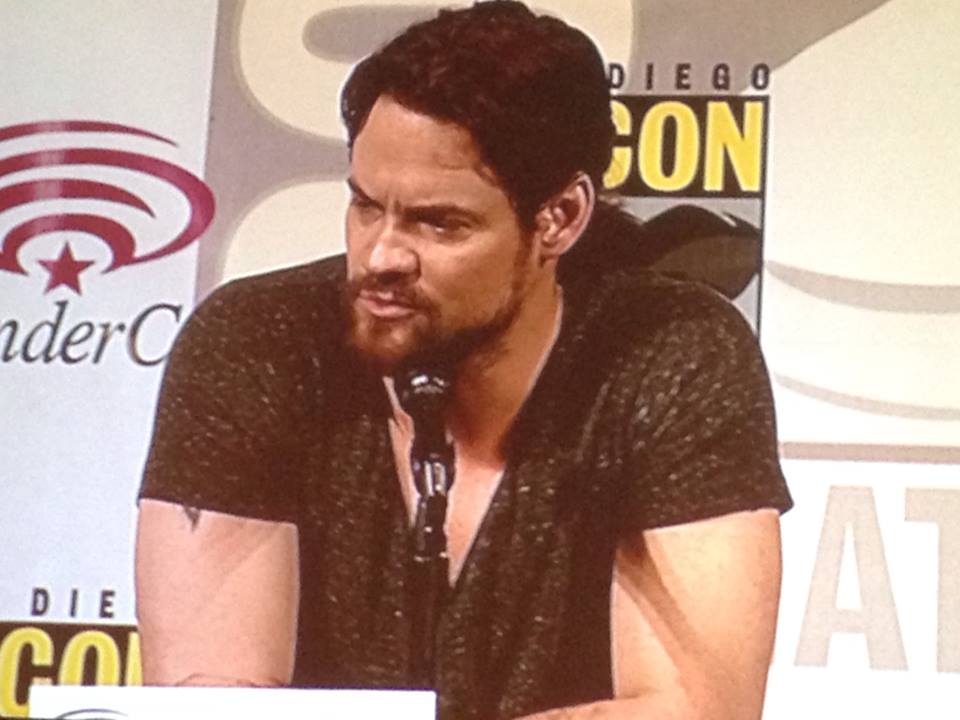 Creator and executive producer Adam Simon, Brannon Braga and Shane West trot up to the podium. They’re asked what inspired the series, and they consider it an untapped area. This seems ludicrous, because witches are ALL OVER the pop culture map, but in terms of the 17th century, and what happens after The Crucible is what Simon and Braga are drawn to.

Shane West’s character has the audience POV, for at least the first episode. The pilot is a lot of reacting, and in the second episode, he has a more aggressive reaction to the events, and that’s when the show really begins, he says.

John Alden (West’s character) is apparently a real person, a war hero (which seems antithetical since he was fighting Native Americans). But “this isn’t the History Channel,” it’s “an alternate reality.” Took real events and then added the supernatural twist as an explanation for why everyone believed witches were real. Though Simon rightly remarks that Alden is not as young and good looking as Shane West. That’s some of the fiction.

As I alluded to, Salem is WGN’s big inaugural scripted series. What are there reactions to the content, which is pretty grisly? “The network has been really supportive of the process, and unflinching when it comes to the material.” Apparently they haven’t found the limits of basic cable yet.

First question from a fan: does the baby come into play in upcoming episodes? Close-lipped, but clearly the baby will be discussed in the future. After they obviously poo poo teasing future events, another guy comes up asking another spoilerific question.

Since John Alden was accused of witchcraft in real life, will they broach that subject on the show? Answer: “Good question.” Real answer: OBVIOUSLY. Then they drop the obligatory line: “Keep watching.”

They revealed the identity of the first big witch… but more are coming. The “witches among us” is kind of the tagline for the show, as they are like Cylons, Skrulls or Hydra agents. No one can be trusted. David Simon mentions that there will be many different types of witches: Essex witches, German witches, French witches, a lot of immigrant witches.

There’s an Isaac the Fornicator question! “Is he like a Renfield for Mary?” “He’s a wonderful character…he represents all the pain and suffering” the people in the town have endured.  I think they know he’s the breakout character of the lot.

And we’re out of time. One lucky person is getting a trip to Shreveport on set, “staying at Shane’s place.” The audience goes wild (“it’s just a studio apartment”). The winner must be “18 years or older,” more laughter. ANDDDDD… I didn’t win. Darn. Good for that dude. 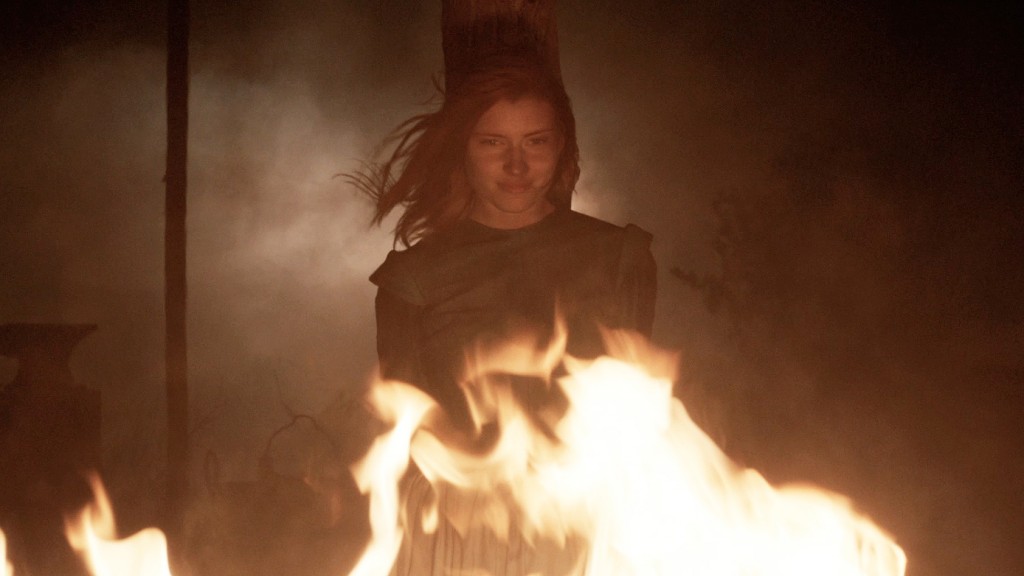