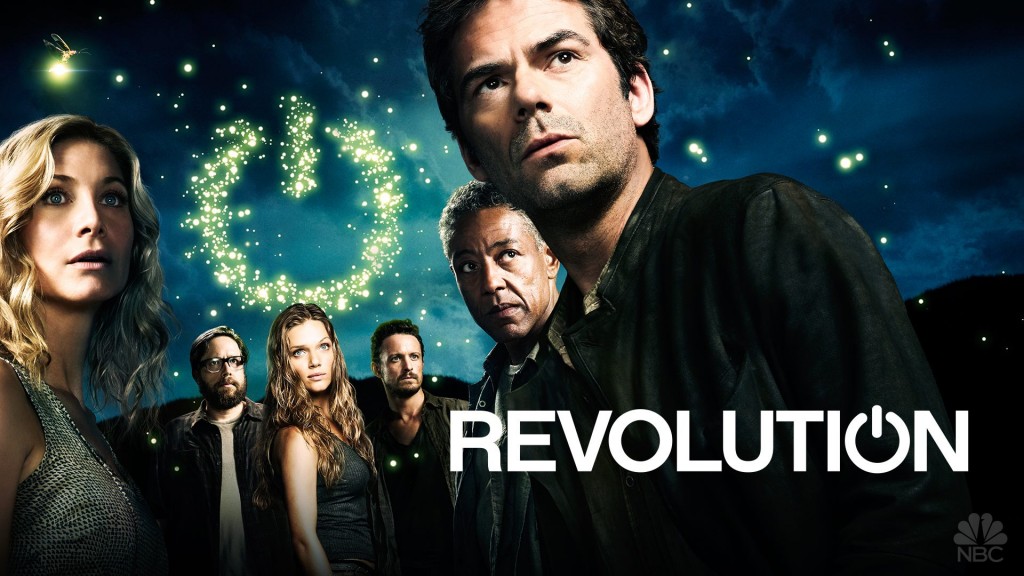 The first season of NBC’s Revolution was one of the more frustrating TV experiences I had last year. The second season brought with it many changes, including new cast members, a massively different status quo, a shift in tone, and a different stable of writers in the writer’s room working with creator and executive producer Eric Kripke (Supernatural). They were all promising moves for the Bad Robot show, though I’ll be honest, I fell off the wagon about 9 episodes into the second season, even though it’s clear the show improved.

Fast forward to now, and we’re four episodes away from the end of the second season, with Revolution a solid, stable performer for NBC, but no certainty to return. Revolution thrives on its lack of certainty, however, with its “no character is safe” mantra being tested again recently, when, SPOILERS AHEAD, Jason was shot and killed by Charlie. Wowza. With that all in mind, here comes the Revolution panel.

We begin with an awesome sizzle reel, which is when I wrote down: When did Revolution get good? Right after I stopped watching it, clearly. The video is filled with bloody deaths, quippy one liners and pop culture references, and it’s badass, including the exclusive, never before seen preview of what’s to come. Hint: it involves a train heist, a very pissed off Tom Neville, and Rachel smacking Priscilla (Maureen Sebastian) around. 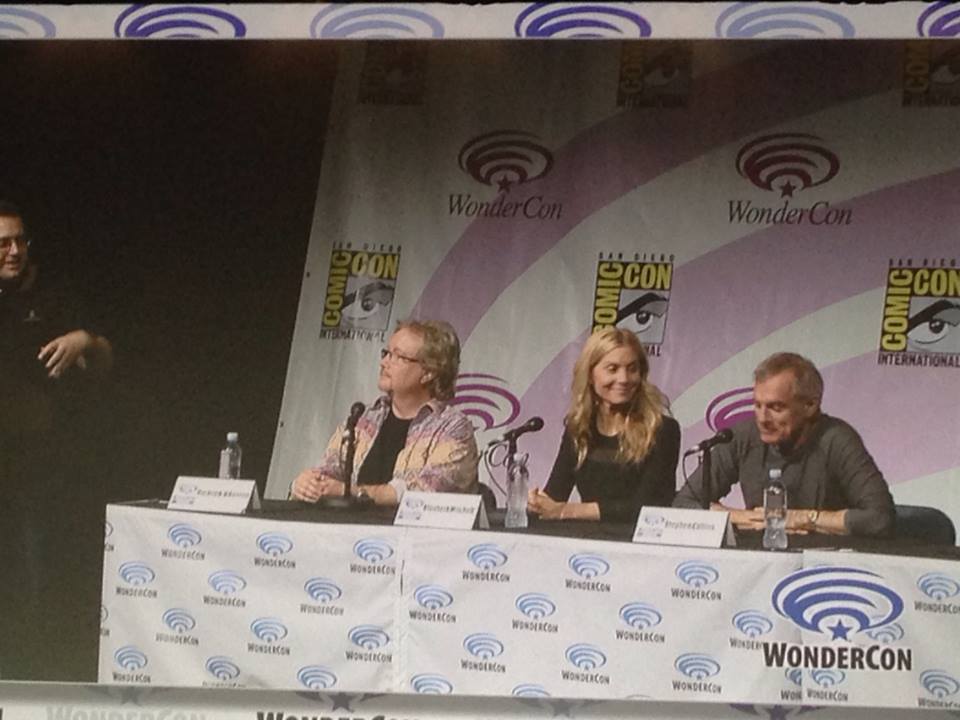 The change in tone, which clearly transformed the show for the better, is immediately addressed. Writer Rockne joined the show in season 2, and is credited as one of the key components for its turnaround. He was a fan of the show on season 1 (the only network show he watched), and then was asked to write for the show in season 2. Isn’t that nice for him? I’ll write for Arrow next season, in case anyone is wondering.
Earlier in the season, Stephen’s character, Dr. Gene Porter, was found out to be secretly working for the nefarious Patriots, right under Rachel and Miles’ noses. Rachel is his daughter, but she tried to kill him anyway. Stephen was genuinely hurt after he watched the episode. Apparently it was far more serious and threatening on screen than when they filmed it on set. Of course, he kind of deserved it, Patriot loving scum (though I’m lumping the Patriots with the sports team, as well).

Goldman mentions and lauds the increased sense of humor in season 2, including many a pop culture reference. Rockne’s response: “Eric’s other show Supernatural had that…and it becomes natural, organic and satisfying.” For Stephen, the humor “lets the show breathe,” because the show is normally the stark contrast of life and death, and the humor brings much-needed levity to the proceedings. As an audience member himself, Stephen loves it, including Billy Burke’s “8,000 ways” he can say, “He’s such a dick.”

The show apparently has “very little ad-libbing.” Collins tell us a story when there is some, however. When we found out that Gene was having a relationship with the bartender, because Billy Burke found her character so attractive, he responded: “Good for you, Gene,” which was not in the script. I couldn’t tell you who the bartender is, but apparently everyone finds her hot on set. 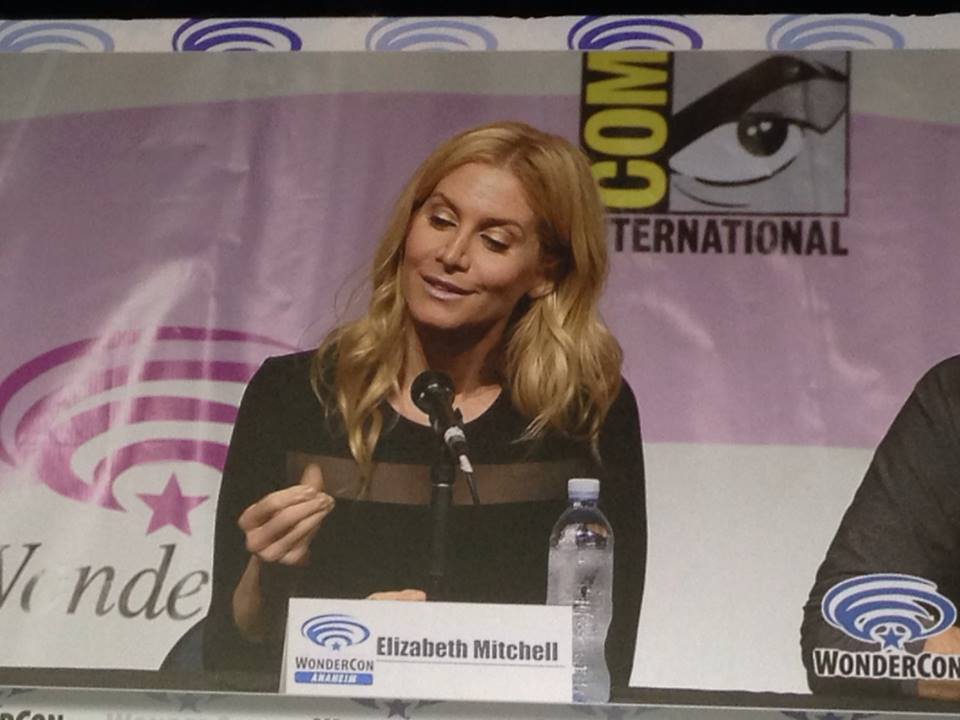 One of the things that the writers on Revolution do consistently…”is justify my bad acting?” Elizabeth quips. No, they don’t give characters an easy out. Stephen refers to it as the Revolution Sophie’s Choice: characters are given a horrible choice, and an even worse choice.

On the subject of Gene’s turncoat reveal, Rockne believes that “Gene’s heart is in the right place, but his mind is end justifies the means.” Interestingly, when Stephen signed on to play Gene, he had no idea he was a bad guy, which he think helped make it all the more surprising and believable when it happened.

What will happen in the aftermath of Jason’s death? Rockne on the death: “Any character is vulnerable, and it really makes the stakes of the show very real. Losing a character as important as Jason is a very difficult decision, but it had such an emotional resonance, going back literally to the pilot, it was the right decision for the show at the time…and spins Charlie in a very unusual way, not what you’d expect.”

Tom lost Julia this year, and is the “definition of loose cannon,” so clearly Tom Neville will be pretty upset now that he’s alone. In the sizzle reel kicking off the panel, we see Neville aiming his gun at Charlie…so it’s safe to say that might not end well.

As Mitchell says, Rachel isn’t the best person to go to with your problems, “but she’s trying” to provide good support, to Charlie.

The second season has split the characters up (a decision Elizabeth and Stephen both loved, giving a chance to work intimately with other actors), with Aaron off on his own, Neville on his own adventure, but now they’re all coming together for the final four episodes. Rachel is “the lightning rod” for both stories: the nano’s and the Patriots.

What does that make Rachel’s role in the last four episodes? Mitchell “…loves the nano’s [plotline],” and is thrilled that Aaron is back. It’s fun to be the person in Aaron’s world and battling the Patriots, because she gets to see what everyone is up to. As the sizzle reel showed, she “smacks Priscilla around a little.” 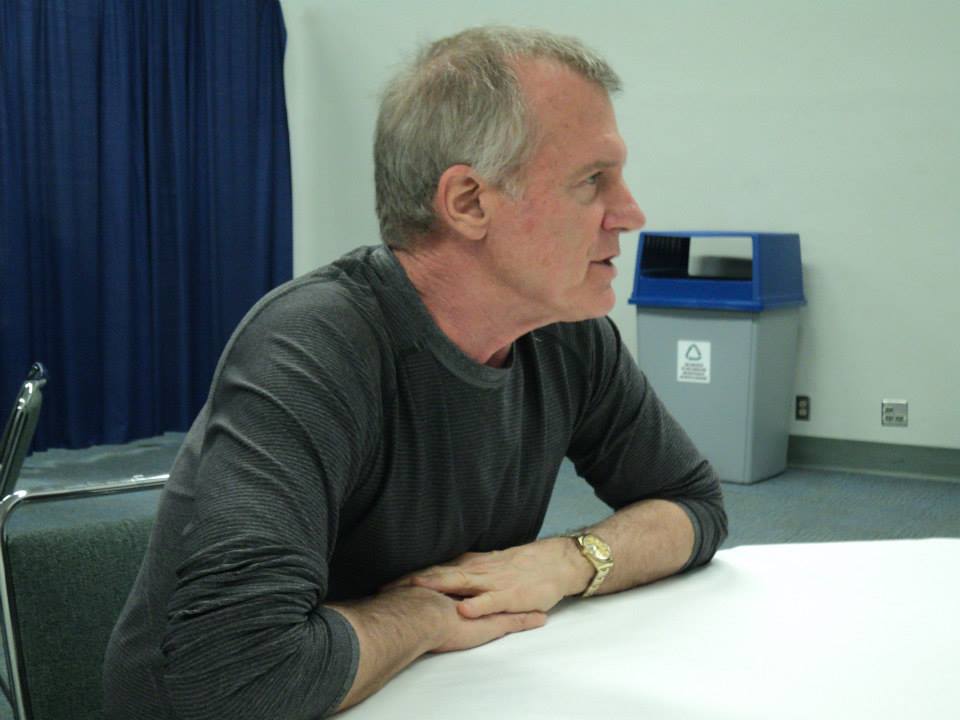 Gene’s role in the last four episodes? Collins explains that the show asks a lot of the actors, that the fatigue that sets in, reflects in the character (and he loves the drain). The characters can look as beat up as we feel. “Gene is trying to figure out how to survive another day…What gets you through?” He loves how the writers are pushing the characters, and testing their faith. He has some “deep, elemental” scenes coming up, including one in particular that Elizabeth was in awe of.

Then the group got to gushing about the “Aaron Matrix” episode, or “Dreamcatcher,” which was a solo flashback episode featuring Aaron (Zak Orth). According to Rockne, the episode was Eric’s idea, and they just needed to figure out when they could do it organically in the season. It was unique for the show because it focused on one character, and they had to figure out how to put the other characters in it. Afterwards, because the actors actually got to wear makeup, Stephen came up to Liz and told her: “Liz, you’re really attractive.” Apparently, the last part of the makeup process on the set of Revolution is normally the “dirtbag” phase. Not so on “Dreamcatcher.” Throughout the episode, Liz was trying so hard not to laugh at drunk Miles and his side comments, and loved Zak’s performance. He’s the everyman, clearly a very funny man, but such a dramatic actor. I’m sure somewhere, Zak Orth is touched by the affection.

The wonderful thing about watching panels on shows you’re not up to date with, is you get questions that mean absolutely nothing to you, are mindboggling, and endlessly intriguing. Like this one: How much more will we be learning about California and Governor Affleck? Um, what? Apparently the California colony is up to something, and the writers have been slowly teasing it out over the second season. They were very comfortable letting the whole thing be at arms-length, but are introducing “itty bitty hints” in the next four episodes. It’s mentioned that J.J. Abrams (executive producer) knows Jennifer Garner (from Alias), so perhaps Ben Affleck is a possibility…. 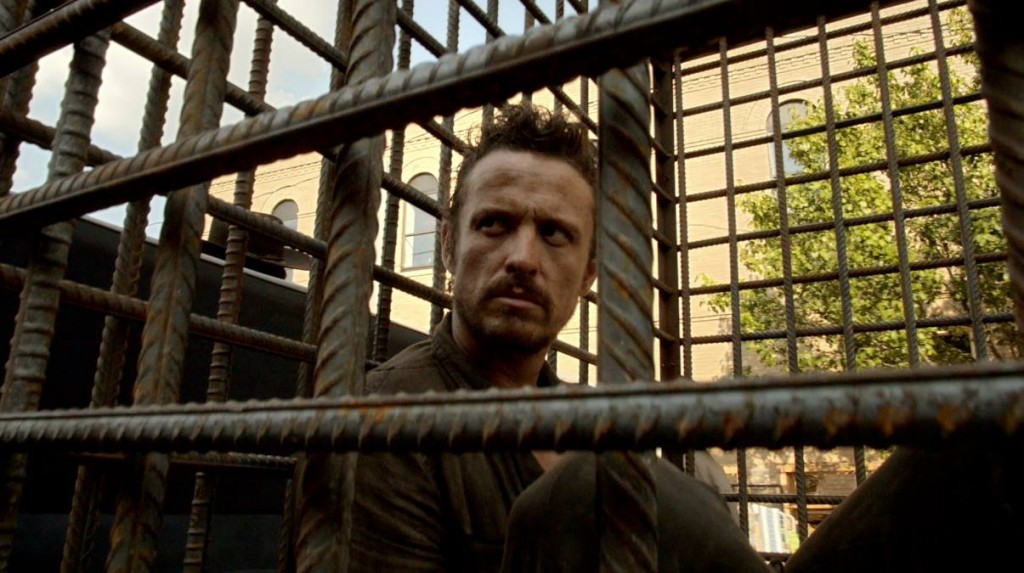 Fan Question #1: How much of the characters shifting alliances were organic or already planned?
Rockne: 30-40% were planned, the rest of it “is what’s going to surprise us, and by extension, surprise everyone else.”

Fan Question #2: What are the possibilities for the 3rd season (if they get one)?
Rockne: Literally at this moment, Kripke is in Burbank pitching season 3 (“and we have a live camera!”). At the end of this season, everything comes together (Patriots, nanotech) and explodes apart, and something is whispered into Rachel’s ear, and those words change what you think was behind the blackout.

Fan Question #3: The guy really loves this show, but he wonders about all the violence in the 8 PM family slot.
“It doesn’t seem like an 8 o’clock show, does it?” Mitchell responds. Mitchell is consistently asking if they can do the things they do. The show was originally a 10 PM show, of course, but when they switched it to 8 PM, it wasn’t about the content, and NBC didn’t ask them to change what they were doing. Rockne calls the show a “wonderful hybrid of sci-fi, some fantasy and adventure.” To which Mitchell adds “swashbuckling.” Every show needs swashbuckling. Mitchell thinks it got bloodier since it moved. “A lot of casual death,” as Collins puts it. Rockne thinks its fun to be on the cutting edge with nanotech, but loves that the show is grounded, with the answer to what we’d do for survival without power.

Fan Question #4: Since the nanotech has taken the form of other humans, including dead characters, is there a possibility that we’ll see dear old Danny again?
Answer: Mitchell is on board with the idea, and Rockne reveals that the writers talk about Danny all the time in the writer’s room. So…maybe. Am I the only one who could care less about Danny?

Fan Question #5: Is anything going to happen between Miles and Rachel?
Mitchell’s answer: “Gosh I hope so. I think they’re made for each other, sadly. In a good way as well. We have a good scene coming up that we both enjoy…”

Fan Question #6: What drew you guys to the post-apocalyptic world?
Answer: It’s Kripke’s creation, so they’re the wrong ones to ask, but Rockne explains that like most Bad Robot shows, it’s a different/alternate version of Earth. As Mitchell puts it, the show asks “my favorite question…What if?” Collins has worked on Falling Skies, another post-apocalyptic show, but unlike that show that has aliens, Revolution is real…except one huge ingredient of our lives has been removed, and Revolution seeks to answer what civilization would look like afterwards.

Fan Question #7: Are we going to see more of how Miles and Sebastian conquered the world?
Answer: “That’s a big open field for us, that we talk about all the time, especially as we get into Monroe and his son trying to rebuild what was once there.” (Rockne) They’re taking the opportunity of Monroe and his son reuniting to give us a glimpse of what happened the first time (though they’re judicious with their use of flashbacks), and want to see how that impacts the relationship between Miles and Monroe. Once they saw Monroe together with the group this season, they knew they had to keep him there.

Fan Question #8: Could Rachel ever forgive Bass?
Answer: Mitchell thinks about that a lot. “I don’t know, I kind of hope so.”

From there, it became a gush fest about the set and the location, as Revolution films in Austin, a city that everyone raves about, always. They also shoot in Bartlett, a tiny town an hour or so away that is a perfect setting for a place without power, filled with delightful townsfolk. After watching this panel, the audience of Revolution has added back a hopefully delighted viewer (that’s me, if that wasn’t explicit enough).