“The Death of ‘Superman Lives’: What Happened?” Is Tantalizing “What If?” For Movie Nerds 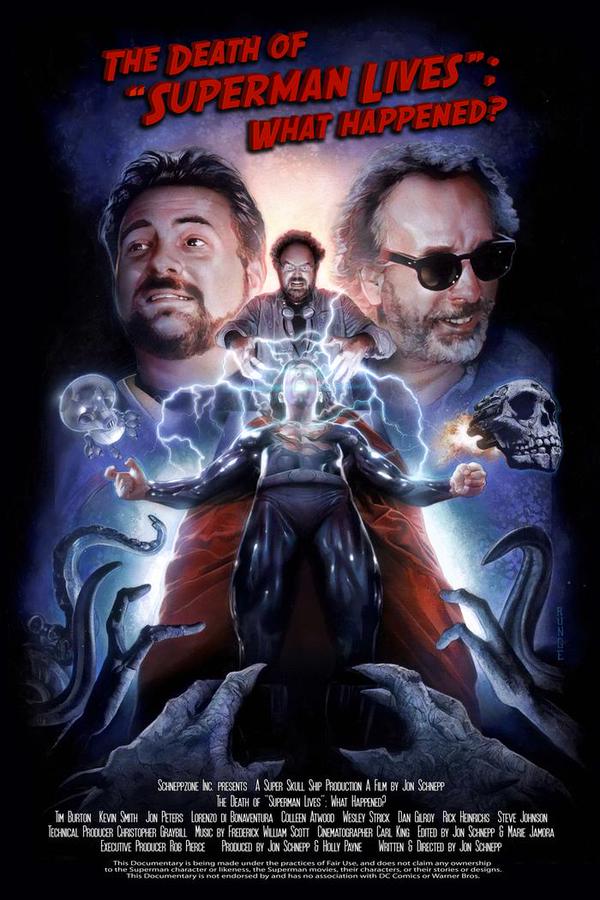 Life presents an infinite number of questions, but perhaps none more provocative and poignant than “What if?”

What if I didn’t run that red light? What if I had gone to that concert with Cait freshman year? “What if?” scenarios can plague us, paralyze us and dull us into a ball of crippling self-doubt, afraid to make any decision lest it be the wrong one. These questions, less painfully, extend to the realm of movies. A Google search of “Movies Never Made” comes up with innumerable lists of films forever in development limbo, including a book by Chris Gore with that very same title and David Hughes’ Tales From Development Hell.

One of the very best films of last year concerned perhaps the Holy Grail of cinematic near-misses: Frank Pavich’s documentary Jodorowsky’s Dune. This year, following successful Kickstarter and FanBacked campaigns, Jon Schnepp puts the spotlight on the insanity that almost was: Superman Lives, a film to be directed by Tim Burton, starring Nicolas Cage as Superman, Chris Rock as Jimmy Olsen, Christopher Walken as Brainiac, Kevin Spacey as Lex Luthor (some things are destiny) and written by three separate writers including the inimitable Kevin Smith. 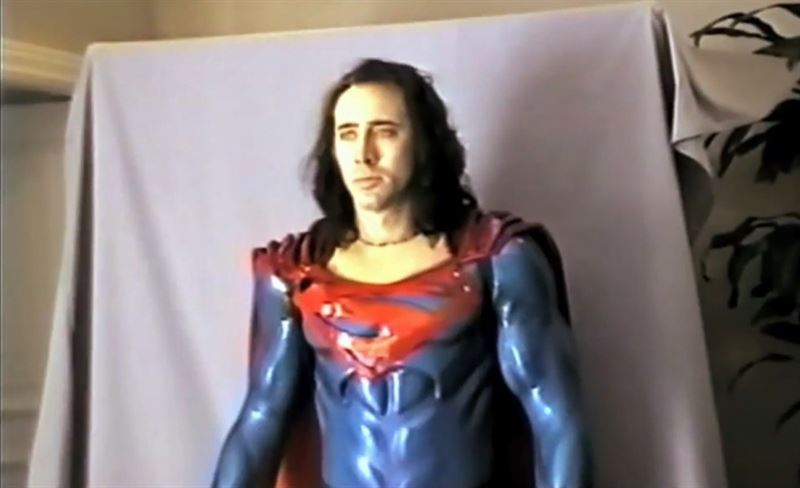 Most of the narratives about the films nowadays are about how awful the Superman costume looked and how silly Nicolas Cage would’ve been in the role. The Death of Superman Lives presents a more complete picture of what the movie would’ve been, and I’d be surprised if anyone, fanboy or not, wouldn’t walk away wanting to see this movie, at least from a pure fascination standpoint.

It would’ve been weird, unique and original, something that seems antithetical to the very concept of Superman at this point. In fact, Superman Lives was such a different take on the iconic character that it wasn’t really a Superman movie, and considering the two reboots that followed, that might’ve been a good thing.

What the casual movie fan knows about the project comes from An Evening With Kevin Smith, where the writer-director talks about his unfathomable experiences working on the project and dealing with the larger than life and insane producer Jon Peters and his mind-boggling mandate to Smith to write a movie about Superman that features no flying, no suit and…a bunch of spiders. 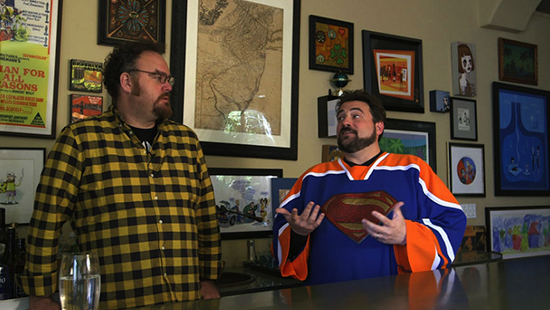 For the first few segments, I was worried that Schnepp’s documentary would be rehashing the same story we’ve all heard before. And for too long, it does. But you can forgive the director because Kevin Smith is a natural storyteller, someone you’re happy telling the same story multiple times (insert Clerks 3 joke here). But he goes further and in more detail, and he admits that his experience on Superman Lives was a turning point in his career, where he learned that he was better at talking about writing Superman than writing Superman. Smith is oftentimes painfully self-aware of his limitations, and I think his fans (like yours truly) wish he weren’t, and certainly have a bevy of “What-If’s?” to direct his way.

Indisputably, Smith is a great jumping-off point into the expanded and crazy world that features interviews with Jon Peters himself, Tim Burton, and a slew of the artists and producers formerly attached to the project.

I was struck by how miserable Burton still is about the experience, referencing the need for cyanide pills when discussing the subject, and that on his death bed, he’ll still be talking about this movie that almost was. In many ways, it’s fair to wonder what this movie’s failure did to Burton’s career. He’s certainly had successes after (Sweeney Todd and Big Fish), but he’s almost become a parody of himself at this point. 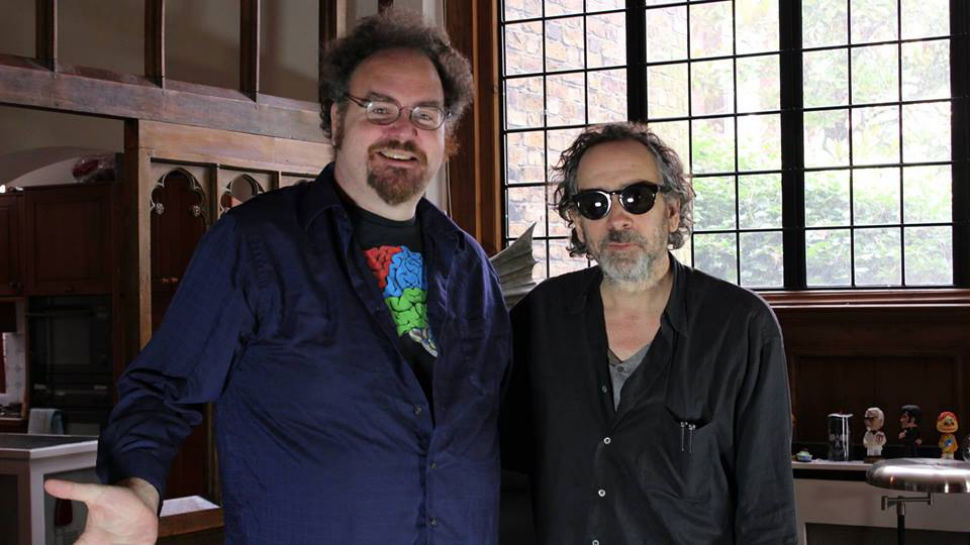 While Cage declined to interview for the film, his presence is all over the doc, given a treasure trove of archival footage that might change your preconceived notion of the actor as Kal-El. We learn that the infamous shiny, rainbow light-up suit wasn’t the suit, and he damn if he doesn’t pull off the main one designed by Colleen Atwood.

After the film, Kevin Smith noted that when approached, he responded: “I’m going to be the star of this motherfucker.” But he rightfully admits, that honor goes to the larger than life Peters, who is gleefully, “exactly as I described him.” Peters, the man who (still) holds the film rights to Superman, is a self-pronounced man from the streets who blusters about having been in 500 fights, known for putting members of his crews in choke-holds…for “morale.” He seems like a joke, a figment of Hollywood imagination (a hairdresser turned Mr. Barbra Streisand turned La-La Land royalty), but he’s all too real, enthralling, and unintentionally hilarious.

He’s also not completely stupid. What he had in mind for Superman Lives is the kind of world-building that Kevin Feige is lauded for today. Smith’s script featured Deadshot, a reference to Hawkman and a Batman cameo during Superman’s funeral (it was an adaptation of The Death of Superman, after all). Brainiac became a green-headed Grim Reaper with spider legs, piloting a Skull ship. It’s certainly not Brainiac, but God help me, he looks cool. Of course, the notion of Luthiac, a two-headed mind-meld of Lex Luthor and Brainiac probably couldn’t have been anything but awful, but who doesn’t want to see Kevin Spacey and Christopher Walken (or Howard Stern or Jim Carrey, two others wanted for the part) bicker on the same body? 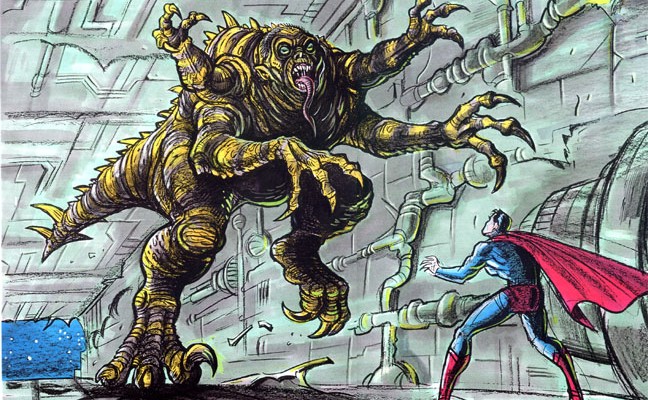 What struck me the most was the wonderful, jaw-dropping concert art, full of awesome Moebius and H.R. Giger-like monsters [the above isn’t one of the best ones; the good shit is in the documentary]. Apparently that’s a death knell for all movies not named Alien, considering Jodorowsky’s Dune suffered the same fate (and they actually had Moebius and H.R. Giger). The film would’ve been an ode to practical FX, with Doomsday very much a kaiju influenced terror, nearly twenty years before Guillermo del Toro made the Japanese concept a par the national lexicon with Pacific Rim.

The documentary bounces around writers, giving equal thrift to Wesley Strick (given Jon Peters’ obsession with spiders, his Arachnophobia experience likely helped him land the gig) and Dan Gilroy (Nightcrawler, Bourne Legacy). When a guy as smart and talented as Dan Gilroy is gushing about Burton’s take on Superman, you can’t help but stop and wonder: Huh?

The film failed for a lot of reasons, but the biggest, as always, was likely financial: Warner Bros. was flailing. Following the disaster that was Batman and Robin and a slew of other big budget blockbuster flops (The Postman, Soldier and The Avengers, to name a few), WB pulled the plug on the massively budgeted Superman Lives. As Burton says, Joel Schumaker not only destroyed his Bat-franchise, but his chance at creating another. The hilarious irony is that the money from Superman Lives went directly into…Wild Wild West, one of the biggest bombs ever.

The movie, like my review, ran long, but it was chock full of details, and a myriad of creative animated flourishes and quirky low-budget recreation scenes. I think all that matters for a movie like this, is that afterwards, I really really wanted this movie to exist. Superman Lives is not only a tremendous answer to a gripping “What if?,” but it presents a sprawling, spider-webbing slew of additional What-If’s about the careers of Tim Burton, Nicolas Cage and Kevin Smith, a metaphor Jon Peters would surely approve of.

Afterwards, writer-director Jon Schnepp, joined by Kevin Smith and a slew of crewmates, came to the stage for an enlivened, talkative and endlessly entertaining Q&A. It also presented potentially a more captivating “What If?” than the movie itself, or at least, one that the movie only scratched the surface of. One which I’ll get back to after these regularly scheduled bullet points:

But now, back to my mind being blown:

While working on Superman Lives, Kevin Smith met with president of Warner Bros. production Lorenzo di Bonaventura. During their dinner, Lorenzo offered Kevin Smith the keys to the DC Universe, the ability to play with the studios’ entire properties, twenty years before Marvel launched the MCU with Iron Man. Smith, painfully young, thought that it would steal his indie soul, and points out that he was “not Joss Whedon.” After this story I almost slammed my head into the back of the movie seat in front of me.

Perhaps Kevin Smith wasn’t the right man to shepherd the DC Universe to film (he certainly doesn’t think he would’ve been), but like with Superman Lives, it would’ve been fascinating to see. Again, what if? What if Superman Lives had been made? As Schnepp explained, in 1997, Marvel was bankrupt. DC was considering buying their company, while on the cusp of making a team-up movie that included Superman, Batman and droves of other DC characters. Might Superman Lives have ushered in the DCCU a decade before Marvel discovered the secret to success? Or would it have been a Batman and Robin style disaster that might’ve pushed it all back even longer, or prevented Iron Man from ever happening? Would we be talking about DC and WB in the same way we talk about Marvel now and in their stead? It’s crazy and tantalizing to think about, and one of the many reasons why The Death of Superman Lives: What Happened? is such a worthwhile story.

As Carrey’s Riddler said in Batman Forever, “too many questions.”

The Death of Superman Lives: What Happened? arrives digitally July 9th. The Blu-Ray will feature a boatload of features, including more on Superman’s resuscitation suit, nerdy Kevin Smith chats, and an extra three to four hours of various footage and featurettes. Jon Schepp is self-releasing the project, and it’s worthy of your support.