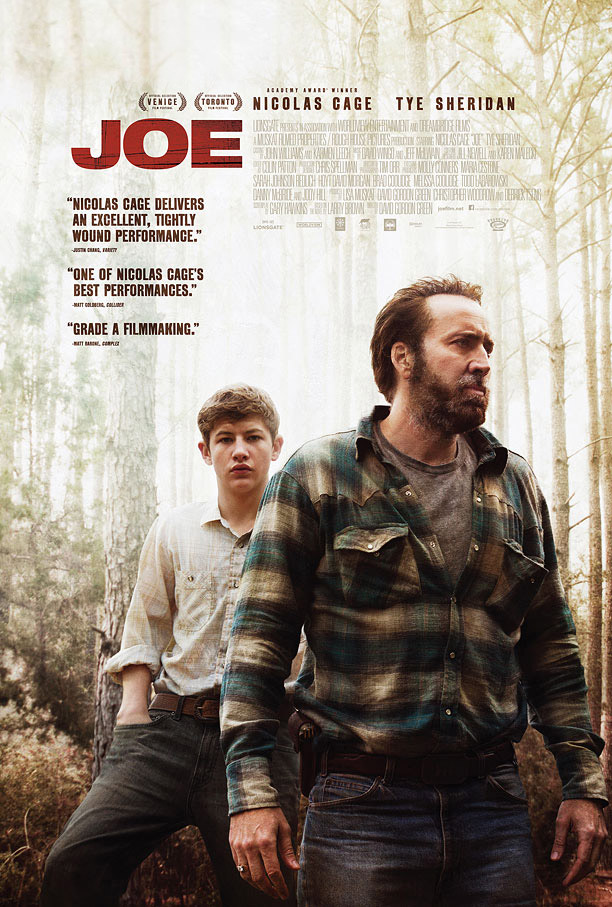 Over the last decade, Nicolas Cage has devolved into a punchline, almost of his own devising, picking and choosing movies as if he was asking for ridicule, as if he can’t live without mediocrity. His resume is inexplicable; his career is an enigma, the idea of which was mined brilliantly in NBC’s COMMUNITY.

Nicolas Cage won an Oscar for LEAVING LAS VEGAS in 1996 and was nominated for another in 2003 for ADAPTATION (where he’s brilliant). Aside from KICK-ASS (and BAD LIEUTENANT?), I don’t know if he’s been in a good movie since 2003 (NATIONAL TREASURE is good?), and his role in that was as over the top as it gets. Cage has always had talent, or something, that’s undeniable, or else he wouldn’t continue to make a million movies, and we wouldn’t be so fascinated by his decline, his parade into B or C-movie land, or whatever you want to label the BANGKOK DANGEROUS years. Is he a higher paid and slightly less insane Gary Busey? A more famous Eric Roberts? A less ubiquitous Danny Trejo? Or is he something else entirely…?

Recently, we’ve all been swept into the amazing story of Matthew McConaughey, who transformed himself from shirtless Texas surfer dude (who was in an actual movie called SURFER, DUDE as recently as 2008) to a challenger for best actor on the planet (non-Daniel Day Lewis division) in the span of 3-4 years thanks to TRUE DETECTIVE, DALLAS BUYERS CLUB, MUD and THE WOLF OF WALL STREET. It’s been bewitching to behold (and not in a SEASON OF THE WITCH or THE SORCERER’S APPRENTICE kind of way), and shows how quickly American audiences can turn, and get wrapped into a redemption or comeback story. 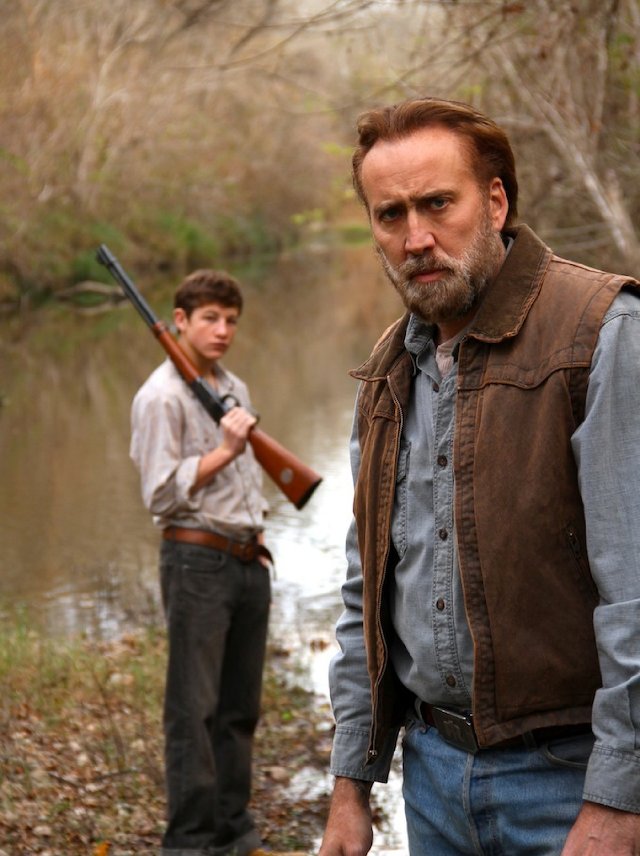 Dare I say it, but JOE definitely has a whiff of a McConaissance, or a Cageback, as JOE is one of the best and most brutal and real movies I’ve seen in a while. Nicolas Cage is legitimately a convincing badass, his screen presence isn’t a joke, and thankfully it never sinks in that Joe’s full name is Joe Ransom. A lot of the credit goes to Cage, but all of the other ingredients gathered together by David Gordon Green are what make everything else so damn authentic.

If you had told me that David Gordon Green, a director known for the PINEAPPLE EXPRESS and EASTBOUND & DOWN (let’s not talk about YOUR HIGHNESS), was the key to unlocking Nicolas Cage’s spirit of vengeance (adapting a book by Larry Brown), I don’t know if I’d have believed you.

But JOE is for real, folks.

Nicolas Cage is Joe, a beefy, tattooed ex-con trying to make good in one of the many towns in Texas you want to drive straight through (and certainly don’t drive angry in). It’s clear he’s a respected man about town, thanks to his hard work and turnaround, and how he’s given many people work. It’s not exactly legal, as Joe and his men poison trees in the forest, enabling lumber companies to chop them down without a fight. Joe is one of those “good men” that really only has the potential to be one, or is a good man only in comparison to all the $#*! he wades through, or is a good man in between his weekly dust ups with assaulting a police officer (though they, of course, have it coming). It’s obvious his temper, and nose for trouble is inextricable. Joe can try to change as much as he wants…but his anger will never go away.

But Joe beats a malicious, abusive drunk for a role model, which is what Gary Jones has to live with. Gary and his family are new to the hovel, drifting from town to town once his father permanently burns their bridges in each one. Wade, the father, is a stain on humanity, a representation of the absolute worst of alcoholism. He beats his family mercilessly (his wife and Gary’s Mom is a husk, and Gary’s sister is mute and likely permanently mentally damaged), and wastes any money they earn on booze. 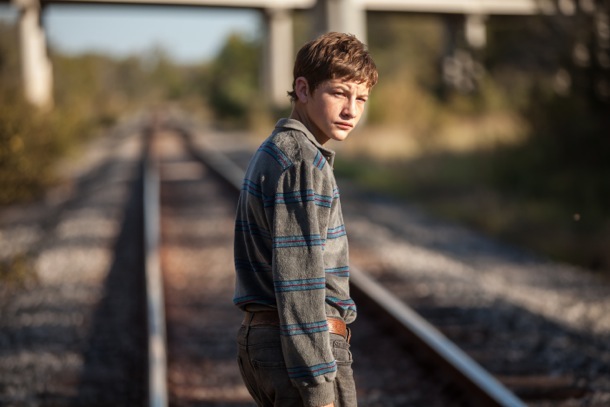 Tye Sheridan (MUD, THE TREE OF LIFE), who plays the brave, tough and vulnerable 15 year old Gary, is brilliant. I’m not sure where Tye summons the courage and the ability to stand up to all the crap around him (or maybe I don’t want to know), but you want Tye/Gary to be happy so bad, that when he smiles his glorious smile (a rare treat), you feel like a doting parent. Sheridan was fantastic as the lead in MUD, and he’s even better here. I’ll be shocked if Tye Sheridan isn’t Academy Award material down the line. 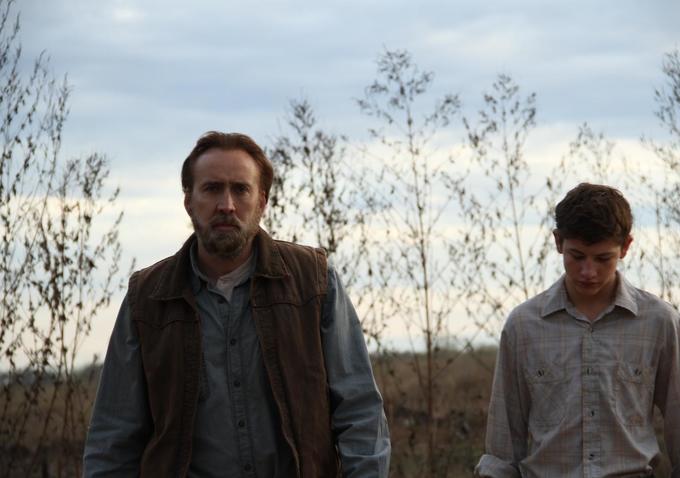 Gary discovers Joe and his men poisoning trees in the woods, and asks for work. Joe immediately takes him under his wing, and also invites his Dad into the fold. Bad idea, as Wade is beyond the point where he can withstand a day of honest work, let alone want to. Joe tells Gary and his father not to come back, and Gary gets a beating for it. It appears that his father has ruined another chance once again, but Gary refuses to give up, hounding Joe for work, on his own. You want the work to be enough…for Wade to lay down in a ditch somewhere, but he and some of the other contemptible vagrants in town, are heading for fateful conflict with Joe, Gary caught in the middle.

JOE works so well because of its casting, and the suffocating seedy, gritty atmosphere soaked in every frame. JOE shows us the evils of alcoholism, law enforcement, and the perpetual cycle of violence and suffering in lower class America. 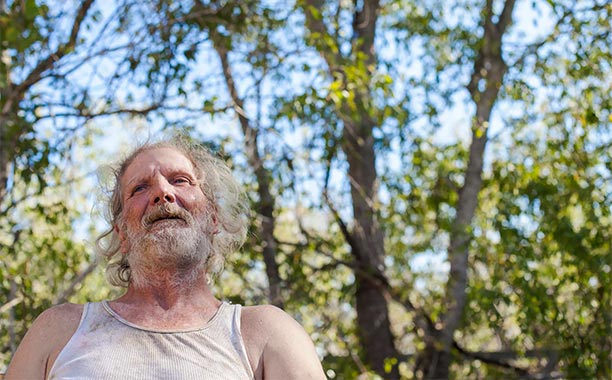 I have no idea where David Gordon Green found his actors, but they’re a revelation. Wade (aka G-Daawg) is played by the beyond grizzly Gary Poulter, as a vile character with no redeeming qualities. And Gary Poulter is terrifying; his lust for liquor and the lengths he’ll go to get another fix, is unsettling, making you squirm whenever he’s in the same scene with Gary. That happens a lot.

Willie-Russell (Ronnie Gene Blevins), as a scarred, vengeful pedophile, is no less disturbing. The fiercely loyal and hard-working Junior (Brian Mays), who looks after Joe’s crew as his second in command, doesn’t even feel like a character. He’s just real, and I wouldn’t be surprised if everyone in this movie save Cage and Sheridan weren’t “actors” at all. It’s as if David Gordon Green showed up to a small town in Texas, and filmed everyone that was languishing about around Cage and Sheridan. This isn’t far off: the cast is made up of indie actors and non-actors cast off the streets of Austin.

Aside from a “they’re friends now” montage between Joe and Gary, when Joe gets Gary drunk and teaches him how to drive his truck (smart), and Connie (Adriene Mishler), who’s the lone bright spot in this town of suck (and out of place for it), everything feels pitch perfect. We know how this movie is going to end, that Joe is going to be unable to stay on good terms with Johnny Law in an effort to help Gary, but it’s no less riveting for it.

JOE is uncomfortable, but a fascinating watch. Come to see Nicolas Cage acting again, stay for an unbelievable (more accurately, unnervingly believable) supporting cast and a snap shot of a world we’re lucky not to live in. Join the conversation before it happens, because I guarantee it’s about to.

JOE arrives in theaters this Friday, April 11th, as well as on iTunes and VOD.