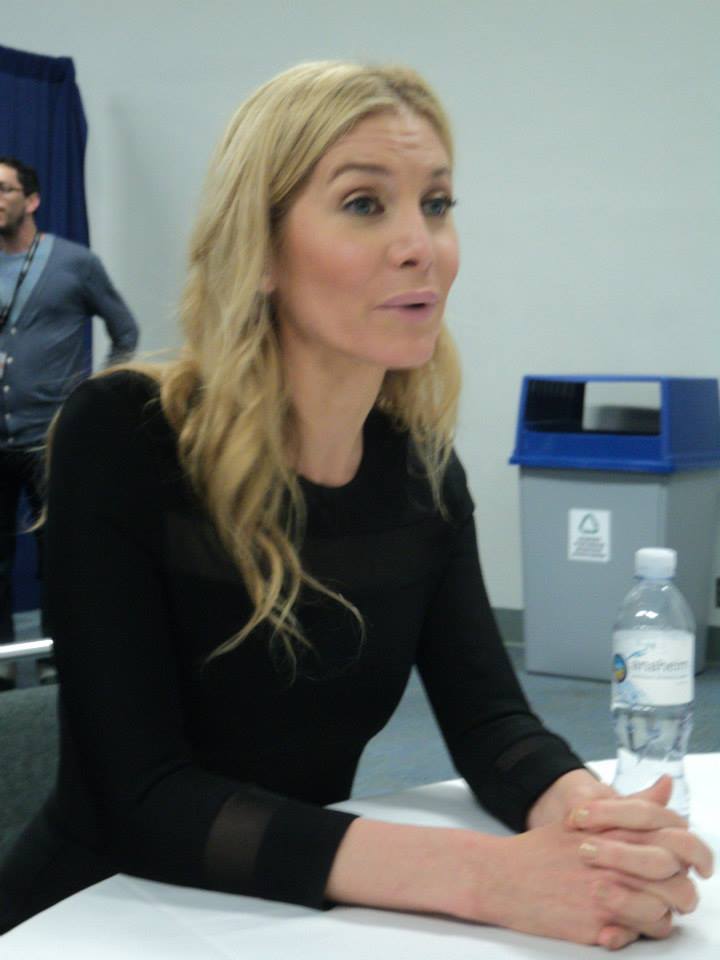 Elizabeth Mitchell is a wonderful human being. We’ve known and loved her since she burst onto the scene of LOST as Juliette, and gave Sawyer (and us) someone to fall in love with. But she’s been all over the map, with V, ER and even Santa Clause 2 on her varied and impressive resume. She currently lights up our TV on NBC’s Revolution as the mercurial Rachel Matheson, which airs on Wednesdays at 8 PM.

Revolution was all over WonderCon for Friday, with an exciting panel, a press conference and a round table chat featuring star Elizabeth Mitchell (LOST), Stephen Collins (7th Heaven) and writer/executive producer Rockne S. O’Bannon (Farscape, Cult, The Twilight Zone). I luckily managed to be apart of that round table, and the following are juicy nuggets from the conversation with Elizabeth Mitchell, as she teases the upcoming final four episodes of Revolution‘s second season, what she wants to see in season 3 (should she and the show survive), her nerd upbringing and thoughts on LOST, conventions and more!

The following questions were not asked by me unless otherwise noted.

After a brief discussion of nail polish (she debated wearing Moss from Butter, if you must know), we launched into Revolution.

“What’s the experience like for you going to Comic-Con, and being at Wonder-Con? Do you get to walk the convention floor?”

Mitchell: “I have never been able to walk the convention floor, yet. I think if I walked in my sweats and baseball cap, I’d be fine. But given that I’m 6 foot 3 in my heels and would be followed by security people,the walking floor hasn’t happened yet for me. But I could do it!

“Have you ever thought about wearing a mask?”

Mitchell: “That’s such a good idea…I’ve always thought about the mask! I could dress as a guy, I’m tall enough to pull it off. That’d be awesome! Yeah, I could do that. And I love both. WonderCon is always slightly easier, it’s lower key. But at the same time, there’s a lot of stuff in it. It’s chewy enough. There’s plenty of things going on. It doesn’t feel like a madhouse and you’re able to do the things that you like to do. Meet the people you like to meet, see the people you want to see. Lower key is always good for me.”

Mitchell: “No, no. And that’s the thing isn’t it, especially for me…I’m a fan of everything. I grew up reading Frank Herbert, and went on to comic books from there. I think I read every science fiction book, I got my comic books every week. I’ve always been a huge believer in sci-fi/fantasy because I think it’s where we try out our versions of the truth. It’s fun…The way I was in high school and grade school…I couldn’t have been beat up more. I kind of hung out in the girl’s bathroom in the stall, reading a book. Sad, but true. But then you get older, and ha, that’s kind of cool actually. It’s better than ‘Oh, everybody loved me my whole life!’ What fun is that? Where do you go from there?”

“You should be a politician.”

Mitchell: I’ve been told that, but I’d be terrible, because I also tell the truth….that apparently gets you in trouble. You just have to ask me the right question… the second to last episode is probably one of my favorite ones we’ve done. Billy gets to do some extraordinary stuff, and I love watching him, so that’s really fun for me. And Charlie has even more good stuff coming up, and I’m enjoying watching her, both because I’m crazy about Tracy, and I’m enjoying how much the character has grown. I think she’s a very interesting character. There’s a lot of big stuff coming with her. The second to last episode is packed, packed with good things. And the last episode is, as always with Revolution, devastating, and kind of creepy, and somewhat inspiring, so we’ll see. Some people, it’s fantastic. Some people, they don’t get out alive, obviously because it’s Revolution…It sounds so cliche to say that, but it’s true.”

“Assuming you make it out alive, assuming, what would you like to see in season 3?”

Mitchell: I’m a geek, I wanna see more nano stuff. That stuff is really fun. I mean, the nano in the last four episodes, is one of my favorite parts of the whole show, so far. The stuff they come up with, where there minds go with it, and visually, it’s stunning. So I’d like to see more of that. Everybody is different with what they like…With Revolution, they tend to throw it all against the wall. What does Stephen [Collins] call it…the Sophie’s Choice episodes, where you have to make impossible choices in every episode, and I like that. I think it’s really interesting. It means you’re always in danger, always on the cusp of something. It’s very hard, simply to coast. There’s no coasting. So yeah, we try to put all the different colors in there. Of course, everyone’s like battle hardened warriors now, so in some ways we don’t show all the things that happen…They are really tough.

Recently, you killed someone off. For those that haven’t caught up, I won’t mention any names. I think, as a fan, it’s important to constantly change characters, and if characters don’t die…

Mitchell: There are no stakes. No risk. I think it has to happen that way…You don’t want to watch a show and think “That person’s never gonna die…” and that’s not how Revolution is. Anyone can die at any time. The thing is, the power went out. Yeah, we have this Matheson family, the whole thing has always been this band of survivors. I like that it keeps it very real, keeps us wondering…it makes it feel like it’s not safe. It probably shouldn’t be. It’s more entertaining that way. 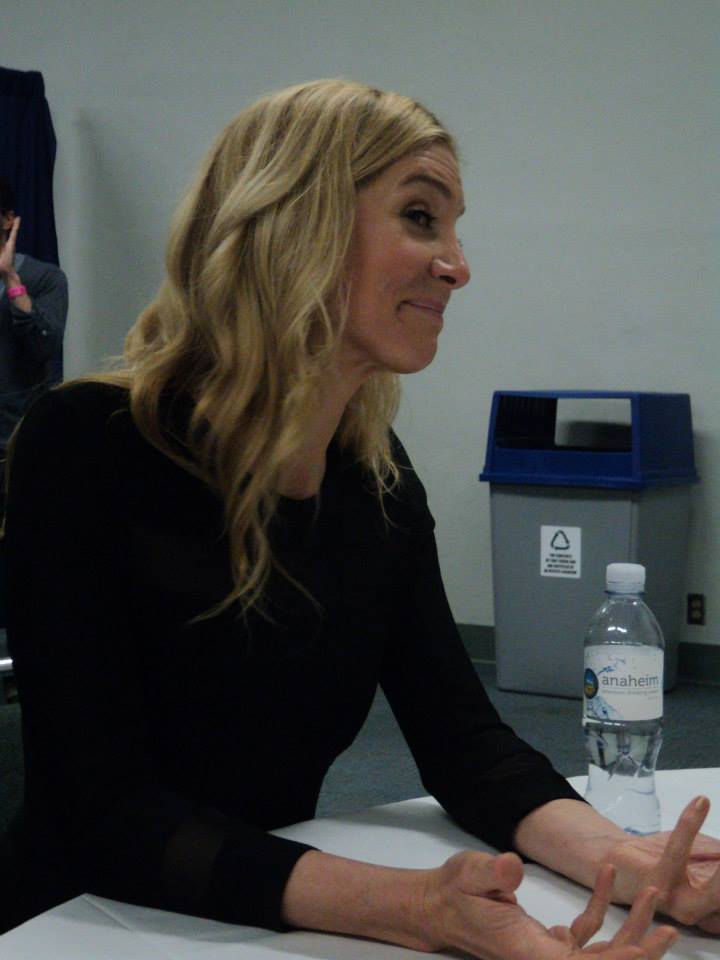 Seven Inches of Your Time: How do you compare the two fanbases of LOST and Revolution? There’s probably a lot of overlap…

Mitchell: Yes and no. I think there’s some overlap, but then there’s also not. I have found that there are people who watch Revolution that I have never met before. A whole new kind of fanbase. And then the people I have met before, from LOST, and the core sci-fi fantasy watchers that you meet. Then on the other side of that, a lot of is different. We’ve roped in my Mom and Dad, who are completely different. My Mom is independent movies and Dad is Conan the Barbarian, and you kind of feel  like..Okay, they both like it. It’s different. I don’t know how to say how it’s different. LOST had a lot of high intellectual how-do-you-figure-this-out way of thinking and people were continually stumped, whereas Revolution is more swashbuckling, like a true adventure. I think that’s where the difference lies, and why it attracts different people.

You’re on hiatus now…and given how much you work on Revolution when the show is filming, how do you weigh adding more work to the mix, or do you just want to sit on your ass for two months?

Mitchell: I have an 8 year old. Ass sitting is not something I do on a regular basis, because normally it’s “Mom!” the moment I sit down. I also have a massive 100 pound mutt…so he usually tries to sit there first, and he’s so big, he’s on the couch, I’m on the floor. As far as other projects go, when you’re doing something that’s 16 hours a day, and all-encompassing, it’s hard to take on something else, it is, because you kind of feel like where’s your time to collapse on the floor. Yeah, it’s hard.

Are you thinking about taking something on now?

Mitchell: I might. I just optioned a book actually. I’m putting that together. And that just happened last Monday.

So you’ve signed the paperwork?

So you can say what the book is.

Do you have a one liner?

Mitchell: Well, actually, I have to work on that, because I was telling the guys at work, and they were like “I’m already sleep,” whereas the women were like, “That’s fascinating!” So it’s a bunch of messed up people trying to figure out their lives, but it’s done in such a clever way, it’s incredibly funny. I would hope to put together a group of darkly comedic people, which are some of my favorite people.

Mitchell: I would like to write it. I’ve written plays, I’ve never written a screenplay. I don’t want to have a tremendous amount of hubris about it. I will try my hand, and then I’ll definitely say, “Hey! Help!” But it’s so beautiful on the page…I laughed out loud and thought it was phenomenal. It’s a bunch of different kind of amazing characters. I’m hopeful it’ll just kind of be there.

How are the ratings on the show? Where does it air around the world? How does it do?

Mitchell: Good question. I don’t know where it airs around the world, I should, but I don’t. The ratings are steady…but they’re not terrific. But they’re steady. Most people do not watch us on the night. And because they don’t, your show doesn’t really get credit for being watched….It’s such a hard thing to tell people, because people always say, “My favorite shows get cancelled!” I never watch anything live, I always watch it on my DVR. And the plus 7 numbers count, but nothing beyond there. Your Hulu doesn’t count, Netflix doesn’t…they count that, but it isn’t marked down. We have a huge amount of people watching us in the playbacks, and our DVR numbers are kind of crazy. We have a lot of people watching us, but it’s hard to tell that until a few weeks after we air. But then people will put it together and go, “Oh! A lot of people are watching that show. So, they’re alright. They’re steady.

When people run into you, in like Starbucks, what is it they want to talk to you about?