Timothy Spall Shines In “Mr. Turner,” A Two And A Half Hour Ode to Human Flatulence 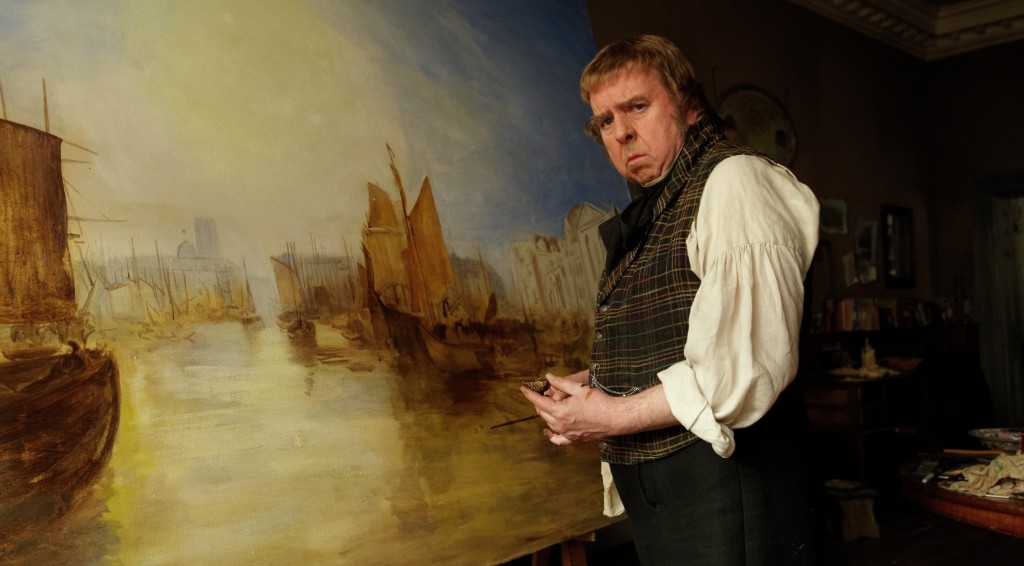 Every couple years, director Mike Leigh (Another Year; Vera Drake) delivers a delightfully British drama, oftentimes mined from history (Topsy-Turvy). This year brings Mr. Turner, a dour biopic illuminating the life of Joseph Mallard William Turner, one of the finest landscape painters (with a nautical obsession; Orlando Bloom’s character name in Pirates of the Caribbean is no accident), whose legacy is colored by his decision in leaving over 19,000 pieces of artwork to the British nation upon his death.

Mr. Turner chronicles an unspecified amount of time in the life of the controversial painter (one might say too long), and there’s no disputing that Timothy Spall (Harry Potter) is perfect for the role, as the thespian won the Best Actor award at Cannes for his all-consuming performance.

As Turner, Spall’s voice is a permanent bellow, punctuated often by grunts and growls. He has the deep gravelly voice befitting a chain-smoking British rockstar on his death bed, yet more often than not, he merely speaks in pointed grumbles, brow furrowed, his lips pursed permanently in a scowl, lower lip jutting out, as if Turner lives his life inches away from a particularly noxious fish dish. Dollop on his unwieldy sideburns, bushy eyebrows and blotched pink skin, and you have a particularly unappealing character who actually says things like, “I beseech you brook your ire.” It’s a testament to Spall’s talent that Turner doesn’t wholly devolve into caricature.

As is the norm with Mike Leigh, Mr. Turner is blessed with terrific costume design and lived-in sets, with as much attention to detail as one of Turner’s impressionist paintings. The movie is peppered with beautiful landscapes of the sea, forest and cliffs of England and abroad. The sanguine, placidly gorgeous vistas are jaw-dropping shots meant to contrast the chaotic nature of Turner’s life and his oil paintings, but mostly contrast the rest of the film because they’re actually pleasant to watch.

The movie’s too long, depressing and at times, boring. More interesting than Mr. Turner is how he affects other people. Turner barely acknowledges his gregarious and obnoxious wife, and we can hardly blame him based on her limited, one-note portrayal, but it’s still disheartening that he denies his children’s existence, skipping his daughter’s funeral. I’d have liked to see their side of things. Of course, we do get to see what his coming and goings and lack of interest in anyone else but himself does to Hannah Danby (Dorothy Atkinson), a hired hand who looks after his house and well-being (and random sexual desires) throughout his life, but aside from being increasingly scarred, sad and loopy, we never get a sense of who Hannah is. She clearly wants more from Turner (everyone does, especially his increasingly less adoring fans) to the point where she actually relishes his inconsistent but forceful advances, but we never know why, or if there even is one: Hannah almost comes off as a doddering, mentally challenged invalid. Of course, Mr. Turner treats everyone like a mentally challenged invalid, perhaps growing used to his simpleton father (Paul Jesson). While the elder Turner ostensibly appears to be the only person he cares about besides himself and his canvases, he really just likes to have a man around who reveres him that he can completely dominate intellectually.

We see a slightly cheerier relationship with Mrs. Booth (Marion Bailey), an elderly widower he woos, a relationship that never feels as comfortable for the viewer as it seemingly does to them. Turner is supposed to be a charming figure at times, but we never see any evidence for it, leaving us forever wondering why anyone wants to share his company.

Mr. Turner might be the most British movie I’ve ever seen, for better or worse. There’s a hilarious scene in which Turner bounces from artist to artist, “helping” them with their work with pointed suggestions, as they feverishly put the finishing touches of work that is to be proudly displayed for the king and queen. Turner’s the Naval commander of one of the many ships he’s painted, at home in the storm of war of politics, putting on a performance for his peers. He deliberately puts a massive splotch of red paint on what seemed to be a finished work, ruining a masterpiece. Instead, he transforms the blot into a buoy swaying in the sea, delighting his audience.

At one point, Mr. Turner and a few of his contemporaries meet over tea and discuss how the outside temperature affects the taste and refinement of the noble fruit, the gooseberry, replete with a snobby, petulant, effeminate art critic who slurs his r’s in cartoonish fashion (About Time’s Joshua McGuire).  Could it be any more British? Mr. Turner feels like a two and a half hour long Monty Python sketch that doesn’t realize it is one. 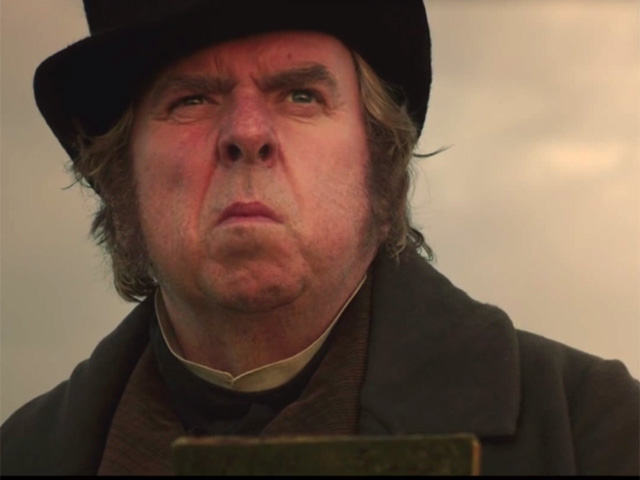 Even before Turner gets sick and deteriorates, succumbing to fits of choking, coughing and other avenues of human flatulence, Timothy Spall is fearless in portraying such a repulsive character. The whole film is noisy. I’ve never seen a movie where coughing seemed to overshadow the plot of the film. It’s not just wheezing; this movie has the weirdest crying scene I’ve ever seen, like Turner is a choking, dying wheezing pig. The whole movie sounds like a petting zoo hit by Ebola; Mr. Turner has a horrific fascination with these noises, and it’s wholly uncomfortable to sit through (and provokes violent reactions). There likely has never been a movie with more bodily babel, though I haven’t seen The Nutty Professor 2: The Klumps.

You know how, while you feel sorry for the poor sap coughing through a play the row behind you, you’re immediately annoyed and wish he would just go home? Mr. Turner is a movie about that man that you can’t escape from for 150 minutes. I appreciate Timothy Spall’s performance, because I’ve never seen anything like it (nor care to again), but even so, it was hard to take seriously, even in the middle of what wanted to be a prestigious artsy British biopic. Mr. Turner was a difficult figure to categorize; so is the film dedicated to his life.