Well, this is why we’re here. This is why I have permanent back damage and could sleep until next year’s Comic-Con at this point. What do we have in store for us? RDJ intro’d the panel two years ago. Hiddleston did last year. Is James Spader going to bring on … Get hard 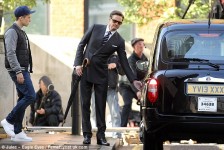