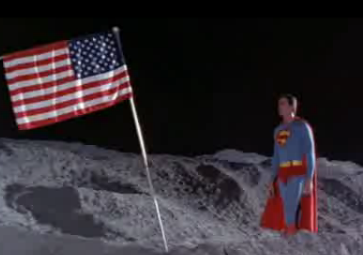 Impression going in: I remember this being bad. And the villain having weird fingernails. That’s it.

Was my impression right? Yes on the fingernails. They’re creepy; I have a pic for you later. But I could not have been more wrong about the quality.  Superman IV is a masterpiece. As you may recall, I have a knack for finding long-buried symbolism in supposedly horrible superhero movies. And that’s the case once again with Superman IV.

But first, some brief intro into why The Quest for Peace is generally regarded as one of the worst films of all time. The movie was the only one of the Reeve Superman films not produced by the Salkinds, who sold the rights after losing a bushel of money on Supergirl. But new owners Cannon Films were somehow just as clueless, giving the money a tight budget that resulted in the worst special effects of the series, and a plot that appears completely nonsensical. For instance, the movie flip-flops about half a dozen times about whether Lois Lane knows Clark is Superman. Here we see her recreating her famous flight with Superman from the first film, while talking about knowing he’s Clark; she literally forgets as soon as they land, with the implication that Superman has selective psychic powers. 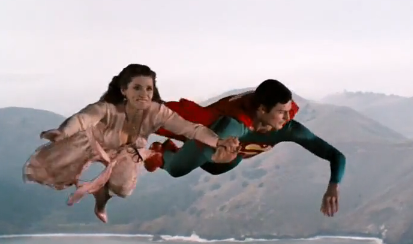 Then there’s the plot itself. Superman decides to rid the Earth of all nuclear weapons, without actually caring if the world is cool with him doing so. Lex Luthor, eager to make money off the sale of those weapons, creates the superpowered Nuclear Man to kill Superman, making the world safe again for atom bombs. Also, I guess Superman is fluent in Russian, and I guess there is sound in outer space. 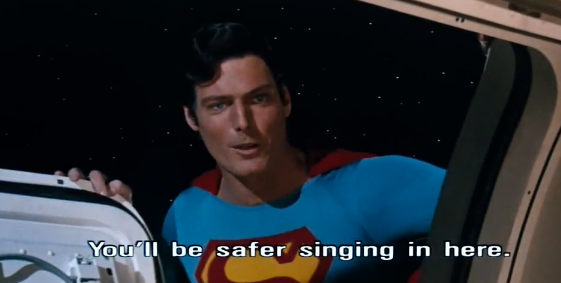 The first time you watch all this, it can be rather painful. But it helps to look at the film for its deeper levels, and it’s clear that there is something deeper going on in Superman IV, but I was unsure what it was at first. A take on the Cold War? Something to do with religion? A scathing critique on humanity’s soulless march toward so-called progress? Actually, none of the above.

Superman IV is an allegory for a child’s birthday party.

At this point, you might be thinking, this is going to be stupid; David just couldn’t come up with anything legitimately interesting to say about this shitty film. To which I have two replies: 1) Hey, fuck you. 2) You’re wrong! Just hear me out; this is all about to make a lot of sense.

The whole nuclear arms plot gets started by this little douchebag. I didn’t think to write down his name, but he looks like a Billy. 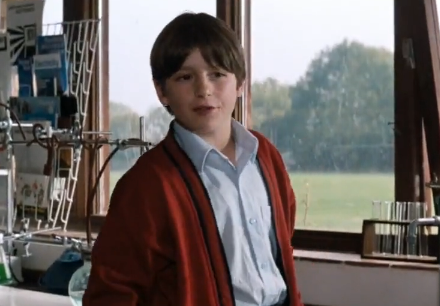 Anyway, Billy here gets called on in class to discuss how the students can help with the problem of proliferation of nuclear weapons. Which, jesus, aim a little lower on the curriculum, teacher. This represents the moment when the child is first asked what he wants to do for his birthday. Suddenly, he’s in the spotlight, which — because children are the worst — he naturally uses to make some batshit crazy request for his birthday party, like ice skating on the moon with the surviving Beatles. For Billy, his moon ice skating Beatles party is to write a letter to Superman asking him to get rid of all nuclear weapons.

Because Superman doesn’t have a mailing address apparently, the letter is sent to the Daily Planet because of their close relationship with the hero. But thanks to an excruciating subplot of the paper being bought by a businessman with an eye for sensationalism, the Planet withholds the letter from Superman and runs this headline instead:

This represents the moment when the dad calmly tries to explain to the child that his birthday party idea would cost billions of dollars, only to see the kid accuse him of not really loving him and saying he’ll just ask mom’s new boyfriend Jeff instead. Well this is the first that dad (/Superman) has heard about Jeff, but he’ll be damned if he lets that asshole top him.

So Superman makes a speech to the U.N. and without waiting for any kid of approval, sets about collecting all the nuclear weapons of the world in a suspiciously huge net, which he hurls into the sun. This is dad renting out the ice skating rink and decorating the walls with cardboard cutouts of moon rocks, then hiring a Paul McCartney impersonator and a much cheaper Ringo Starr impersonator. 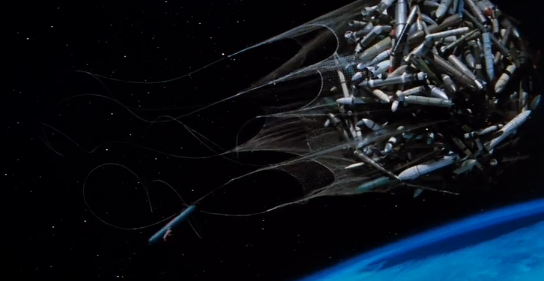 But of course, mom (Lex Luthor) isn’t going to just let dad be the hero, so she has Jeff (the Nuclear Man) start trying to trip up dad. This contest of wills is represented as a literal fight in the film, of course. And mom even one-ups dad by fulfilling little Billy’s wish for a young Horace Slughorn to make a brief appearance. (Billy has weird requests, but the point is that mom pulled it off.) 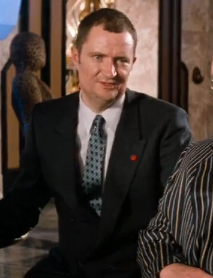 So Jeff shows up at the party, and dad’s first thought is that he’s better than this chump. Jeff leaves muddy footprints everywhere (or atomic footprints, that only sometimes appear) and has some gross physical characteristic (THOSE FINGERNAILS). 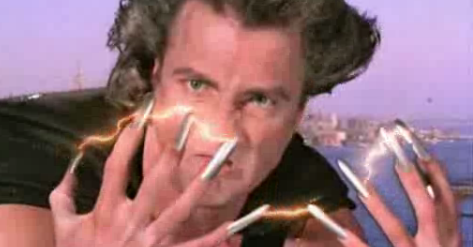 So Jeff starts doing things to try to mess up dad’s vision for the party, like “accidentally” breaking one of the moon rock cutouts to show how cheap and flimsy they are. This is represented by the Nuclear Man destroying part of the Great Wall of China.

Or “accidentally” knocking over the birthday cake (the Nuclear Man cutting off and throwing part of a mountain).

Or even “accidentally” knocking the cheap wig off the Ringo impersonator (the Nuclear Man toppling the Statue of Liberty). 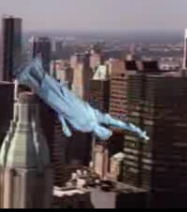 Like Superman, dad must hastily follow Jeff/Nuclear Man around to hastily set right the various havoc he wreaks. Worse, he must do so while also fending off the advances of the skanky skating rink employee (or newspaper owner’s daughter) and even saving her life when Jeff pushes her out on the ice without shoes (the Nuclear Man literally flies her into outer space without a suit, which does not harm her at all). 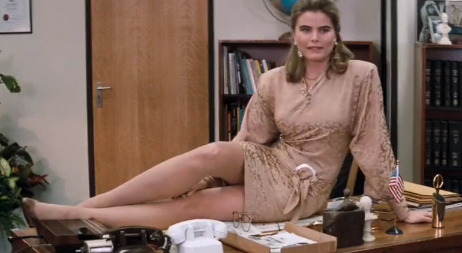 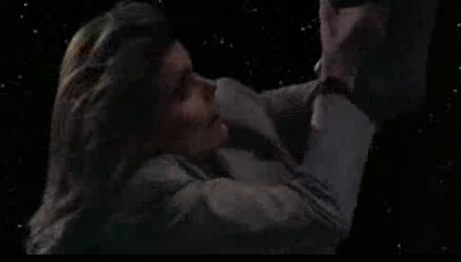 Admittedly, I have not been to a kids’ birthday party since I was a kid myself, nor have I ever been to an ice skating rink, but I assume there’s usually an imperiled seductress at both. Otherwise, this symbolism theory might have a hole, and we all know it does not.

Also, Jon Cryer is there as Lex’s nephew, presumably to symbolize the kid who everyone hates but Billy’s parents tell him he has to invite him to not be rude. 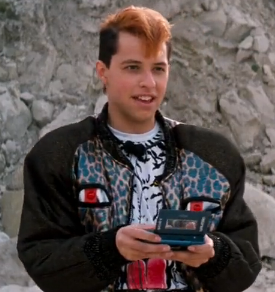 Anyway, as improbable as it looked, Superman pulls it off, and mom/Jeff get their comeuppance. In the symbolized world, dad has maxed out every credit card he owns, including two new ones he had to get for just this occasion. In the movie, Superman moves the moon from its orbit to cause an eclipse, cutting the Nuclear Man off from his source of solar power; the film cuts out the killer tidal waves that this presumably caused. The point is: there are drastic but unseen consequences.

Superman ends with a speech about how he can’t solve every problem, but he had to try. Importantly, we never see Billy during this speech. Does he accept Superman’s “there are flaws but I’m doing my best” explanation? Did Billy view the birthday party as a reasonable success? 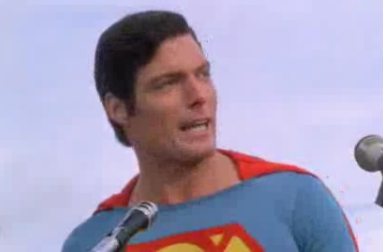 We will never know. Goodbye, Christopher Reeve. You were our best dad ever.