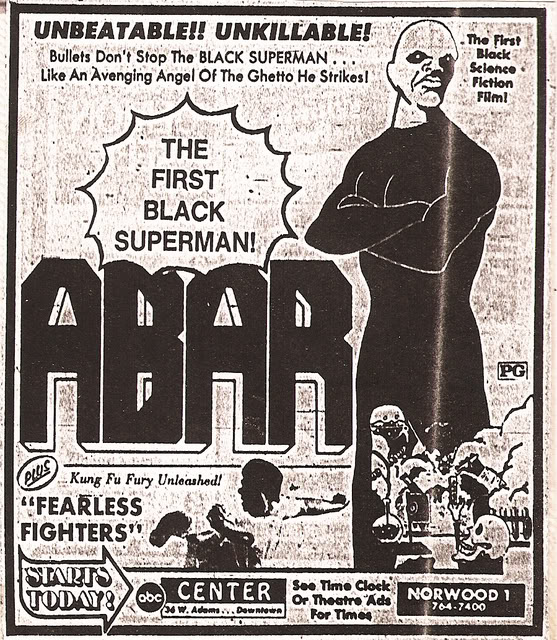 I guess I should start this by casually mentioning that I’m white.

Like, really white. I can’t even tan. I burn to deep red very quickly, then go straight back to really white. So I’m probably not the most qualified person to write about a blaxploitation film. But, ABAR is on my Wikipedia syllabus, even though I wouldn’t describe it as much of a “superhero” movie, so here we are.

First, a brief mention about title confusion. Wikipedia calls the movie, “Abar: The First Black Superman.” One movie poster I found online goes with “Abar: The Black Superman,” and Amazon shortens it even further with “Abar: Black Superman.” For its own part, the opening film credits just read “ABAR,” so I’ll use that for brevity’s sake. I’m also going to go a little heavier on spoilers than usual, because don’t lie, you’re not going to watch this movie anyway.

ABAR is a 1977 blaxploitation film that explores white suburban racism and the lack of unity among African Americans in improving ghetto life. It runs about 1 hour, 45 minutes, with not even a hint of anything superpowered or supernatural until about the final 20 minutes. Then near the end, we get a 10-minute sequence that almost makes the rest of the film worth it.

Until that sequence, it’s a tale mostly revolving around the Kincade family, newly moved into a fancy house in white suburbia. Their new white neighbors are immediately very openly hostile, and a city representative even offers to buy the house from them at a higher price. But Dr. Kincade (J. Walter Smith) is tired of being driven away by racists, and draws a line in the sand to stay in that house with his wife and two kids, no matter what.

So then we get long series of scenes showing us some pretty horrible racist people. The dark-haired white lady goes over to welcome the black family whom she assumes are the servants of the real white owners, then when told that they are the owners, screams for the “n——s” to leave. 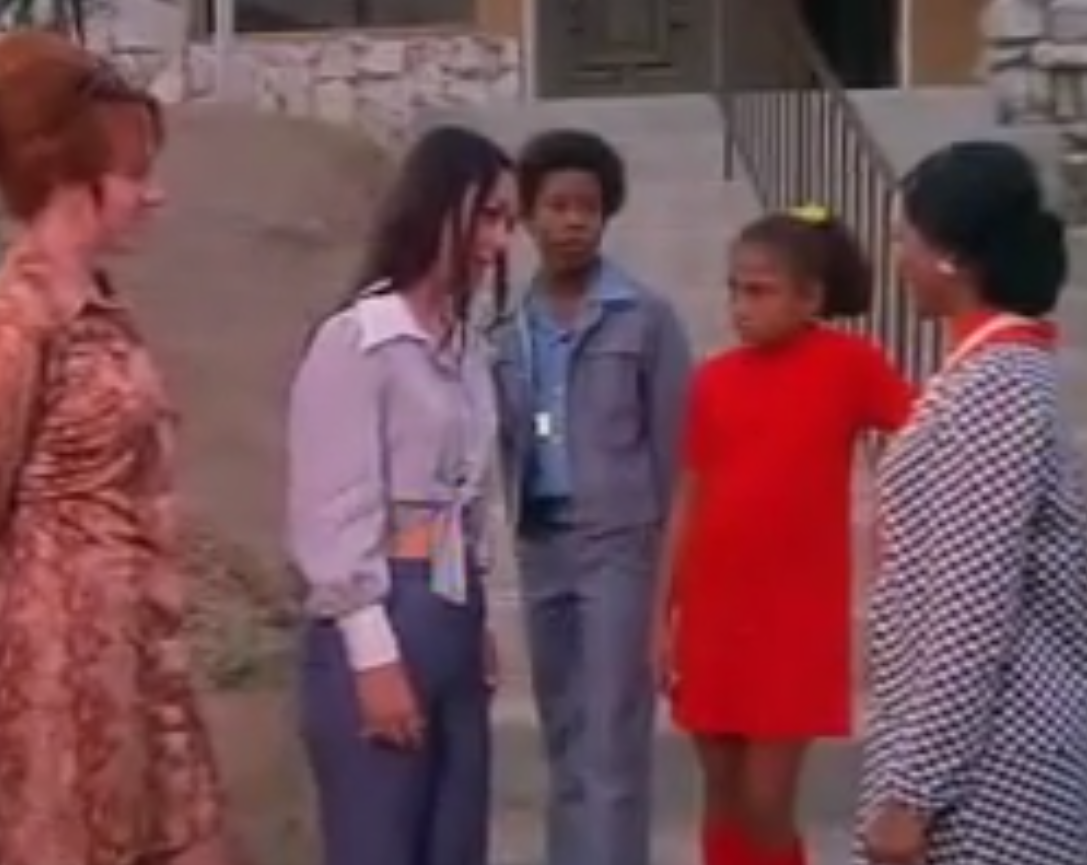 Somehow, these racists only get less subtle from there: 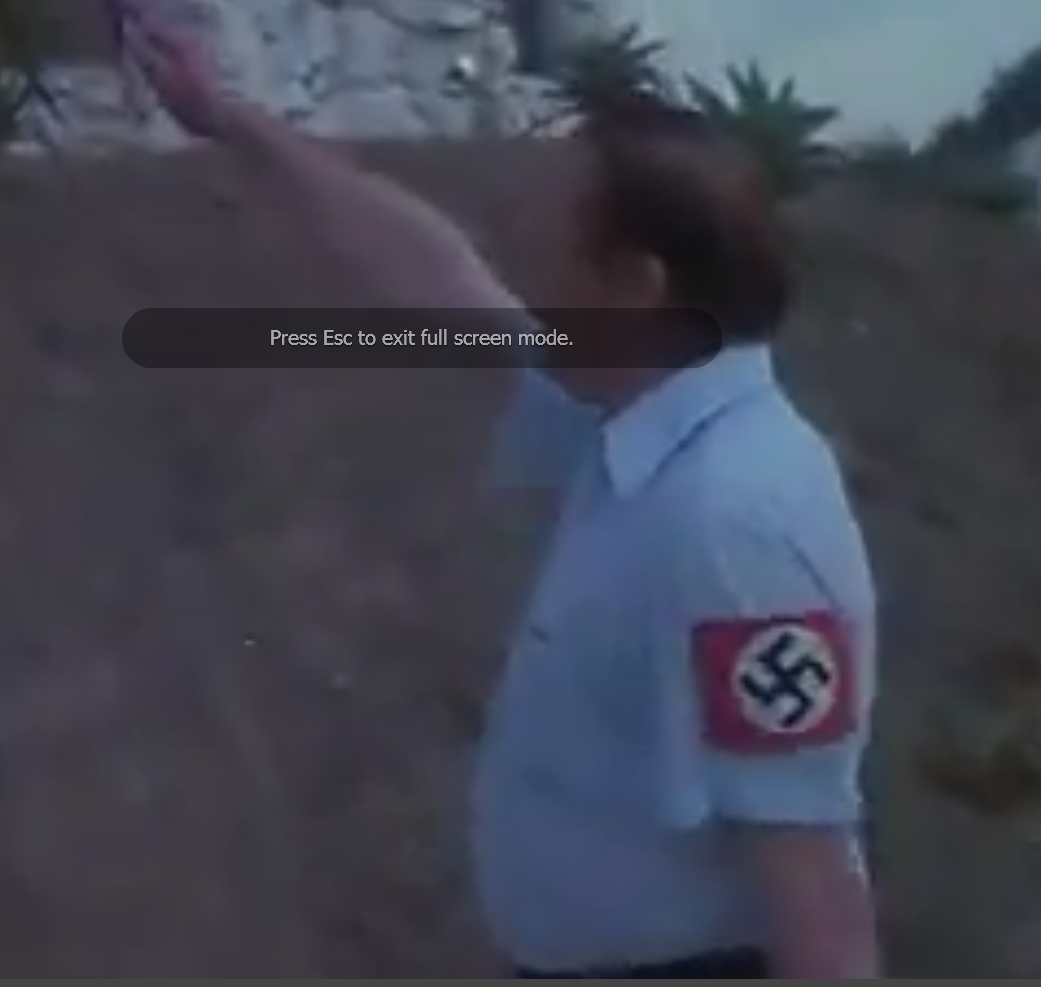 So Dr. Kincade hires some protection for his family. Enter Abar (Tobar Mayo), whom we’ve previously seen at ghetto rallies encouraging African Americans to stick together and stand up for what they deserve. His relationship is always a little antagonistic toward Dr. Kincade, whom he accuses of abandoning the ghetto, but he protects the family anyway, fighting off various attacks by assorted white bigots. He particularly bonds with the family’s son, who then dreams a random scene where Abar is a cowboy protecting the family in the Old West: 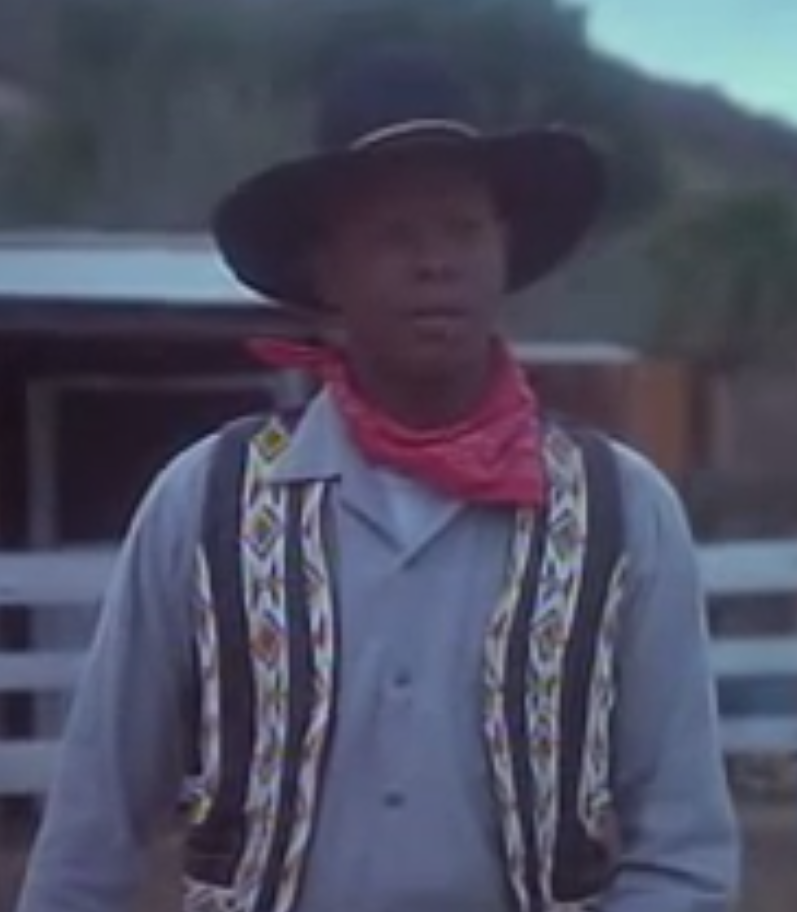 At the end of that dream sequence, Cowboy Abar tells us one of the themes of the movie while introducing himself (in cowboy persona): “My friends call me Deadwood Dick. But my enemies call me smart black n—–.” This sense of dehumanization and lack of identity at the hands of white aggressors is prevalent throughout the film, culminating when a white motorist runs over the son, killing him. Mrs. Kincade (Roxie Young) weeps in the street, screaming that all the white families around helped kill her boy, as one by one they just turn away and go back inside.

Mrs. Kincade and the remaining child leave to stay with a relative, while Dr. Kincade is ready to finally test his secret project. He’d apparently been working on a superhuman serum that he now tests on Abar. All he tells us is that it makes people indestructible. At this point, I’m still assuming that Abar is going to become Superman, with a capital S, only black. Maybe even wear some awesome blaxploitation uniform. But as we soon see, the movie means a lower-case superman, with confusing powers, who just wears a regular suit: 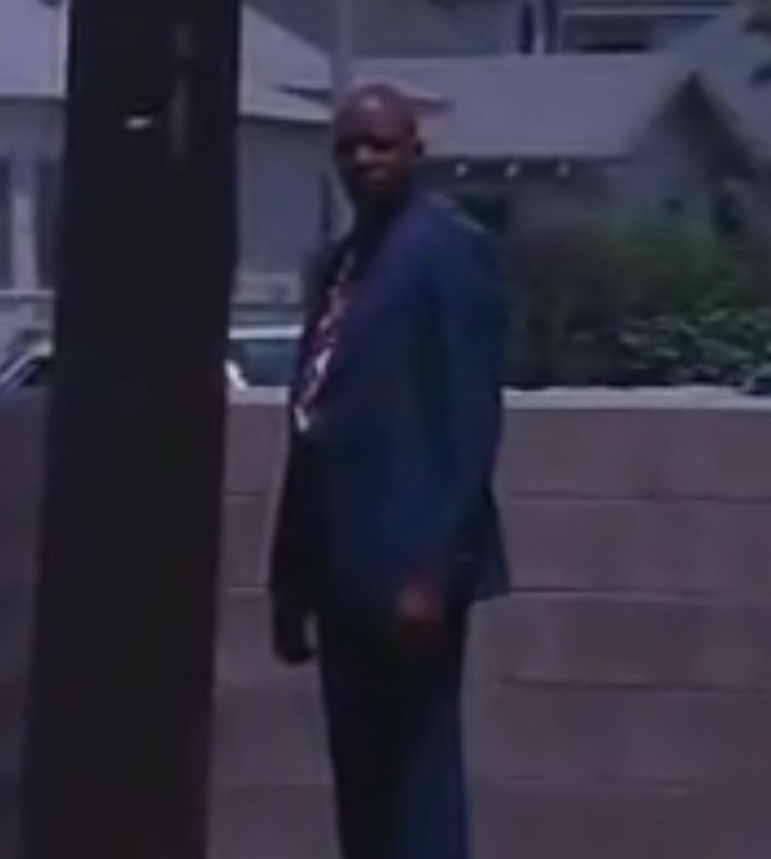 Abar’s powers debut when he’s chased down by crooked cops who’ve already tried to frame him for a murder they committed. They open fire him on him, but he just sits there, motionless and without speaking. 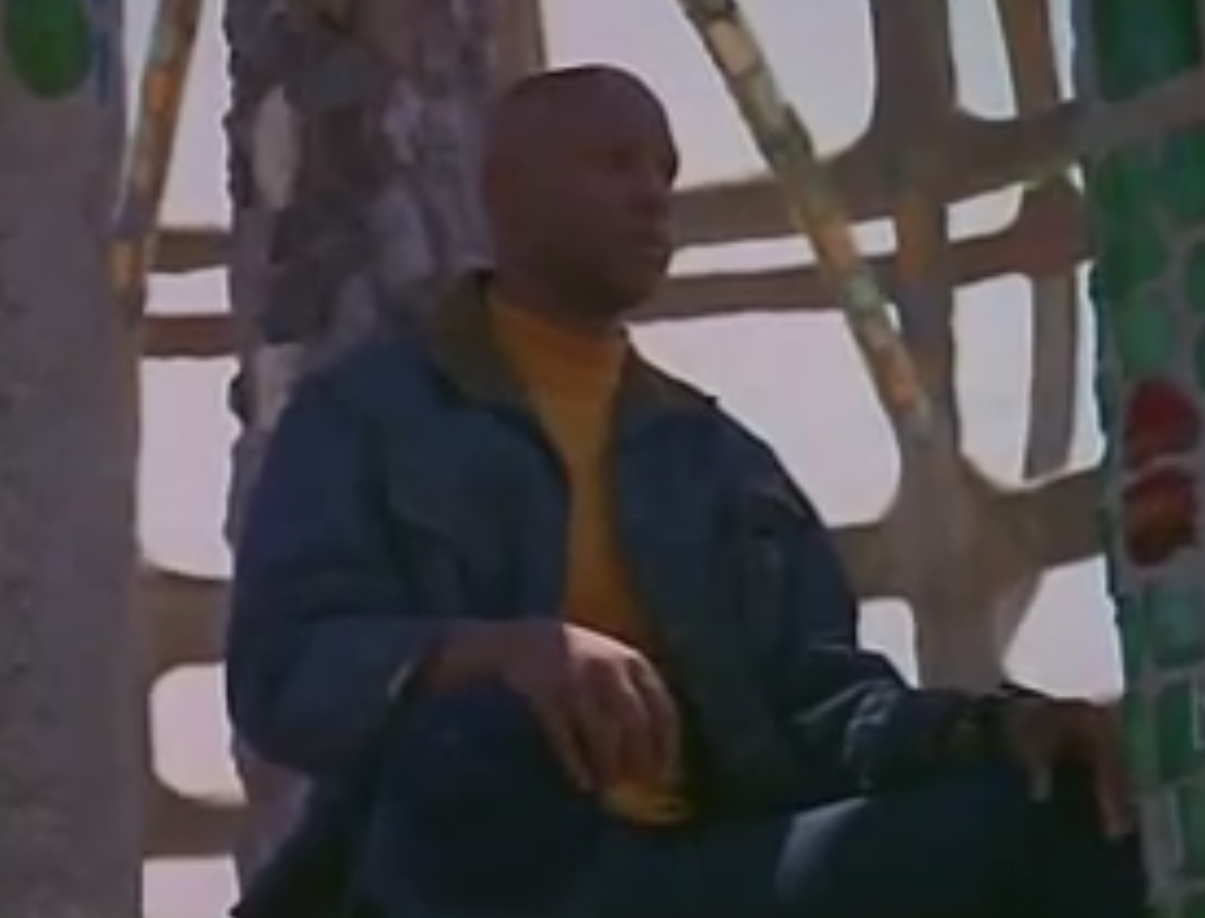 Suddenly, each of the cops decides to either quit and go home, or start fighting each other. It’s weird. And from there, we get the redeeming 10-minute superpowers sequence I mentioned earlier. Keep in mind, the movie itself has made no mention yet of what Abar’s new abilities are, besides being bulletproof. As we watch him move silently from encounter to encounter, though, we realize that he apparently has unlimited mental powers, capable of changing people, things, and places to anything or anyone he wants. He’s less superhero and more god of vengeance.

We follow Abar through the ghetto as he sees various crimes (or just things he dislikes, I guess). Each time, we see the incident, get a close-up of Abar’s eyes, then see his new resolution. It starts with simple stuff like a guy who snatched a purse from a woman, but it only gets weirder. 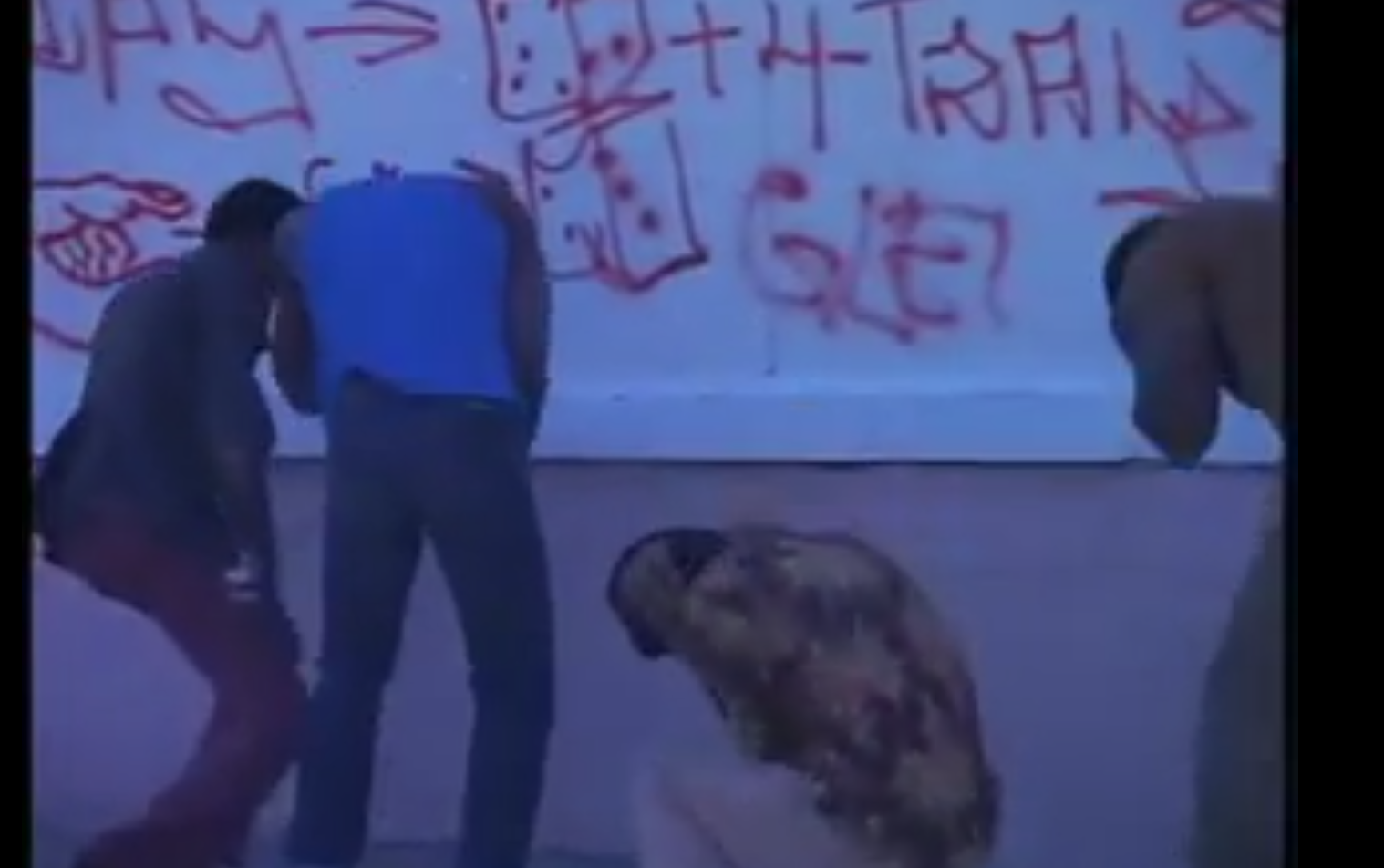 Well, they shouldn’t do that, but there are probably bigger priorities for new God Abar— 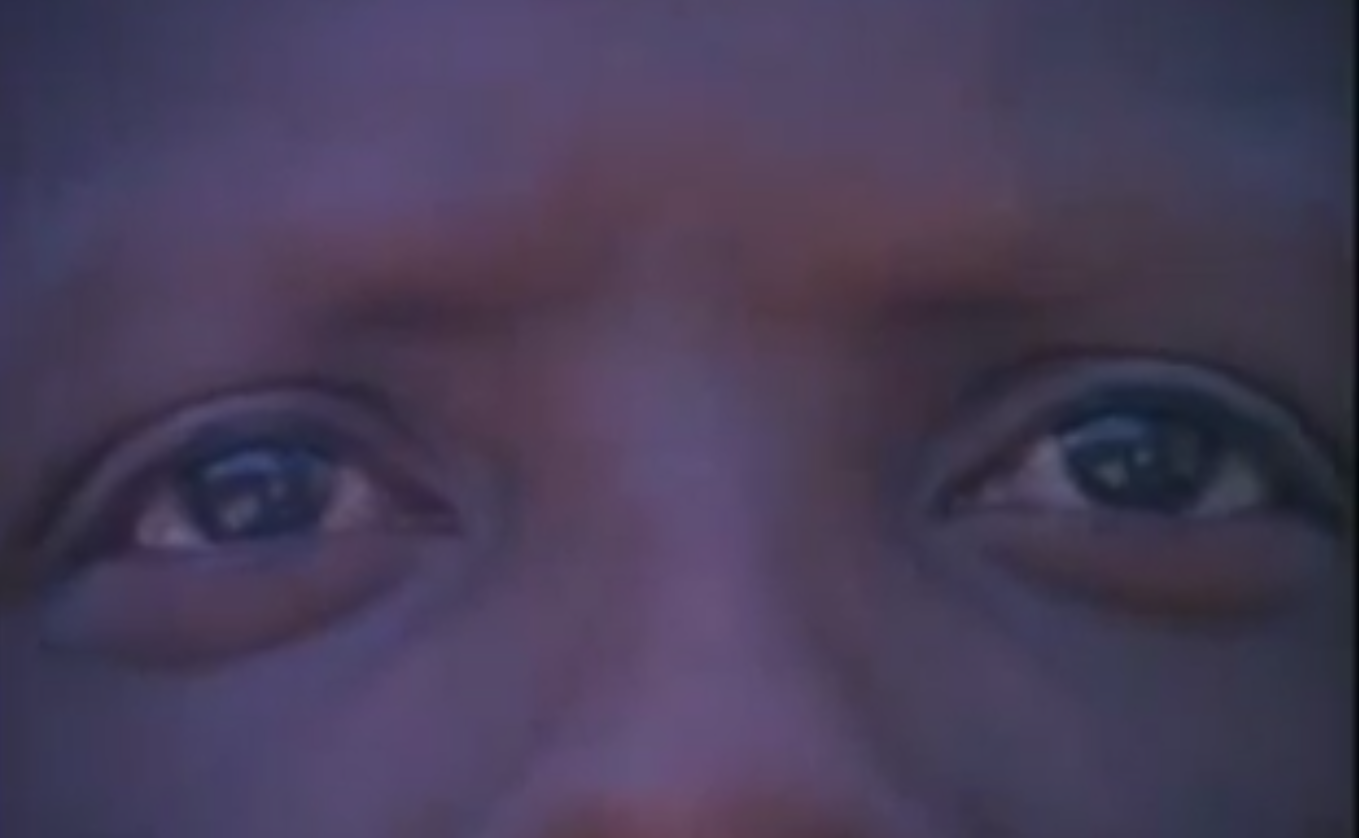 Ok, so I guess he has a special thing about vandalism. I wonder how things change?

Ok, cool. So Abar stares, and they change into being productive citizens, helping clean up their graffiti instead. Makes some sense. But hey, why are we now seeing a black minister leaving his church?

Ok, I guess that’s kind of a nice car. Maybe we’re supposed to assume he’s stealing money from the church/his congregation? But maybe you should do some fact-finding, Abar; he could have just inherited it or something. 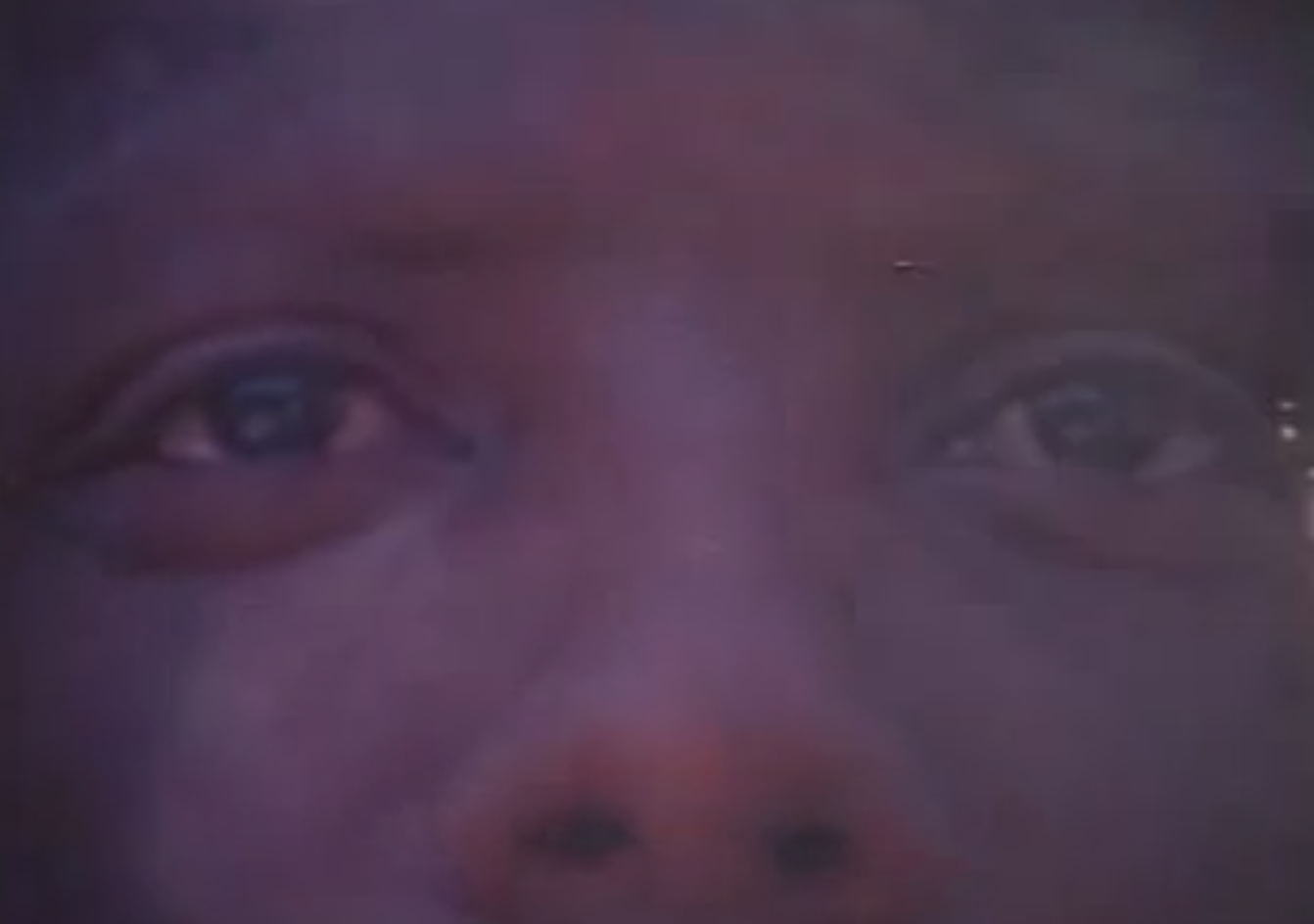 Nope, we’re doing this. Guilty in the eyes of Abar. What will be his punishment? 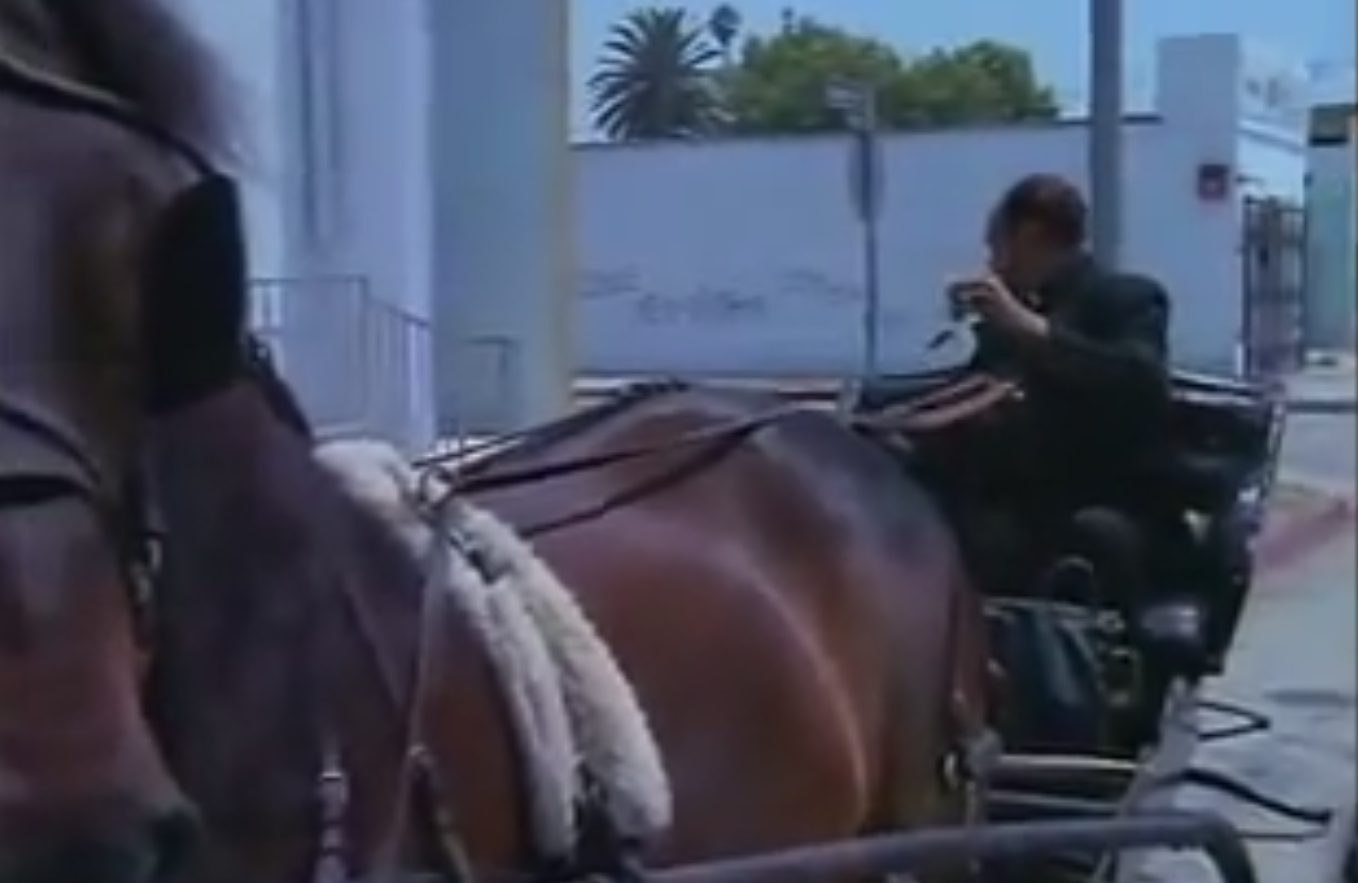 Poof! His car is now a horse and carriage. The best part is, after a brief moment of confusion, the preacher just shrugs and starts driving away. 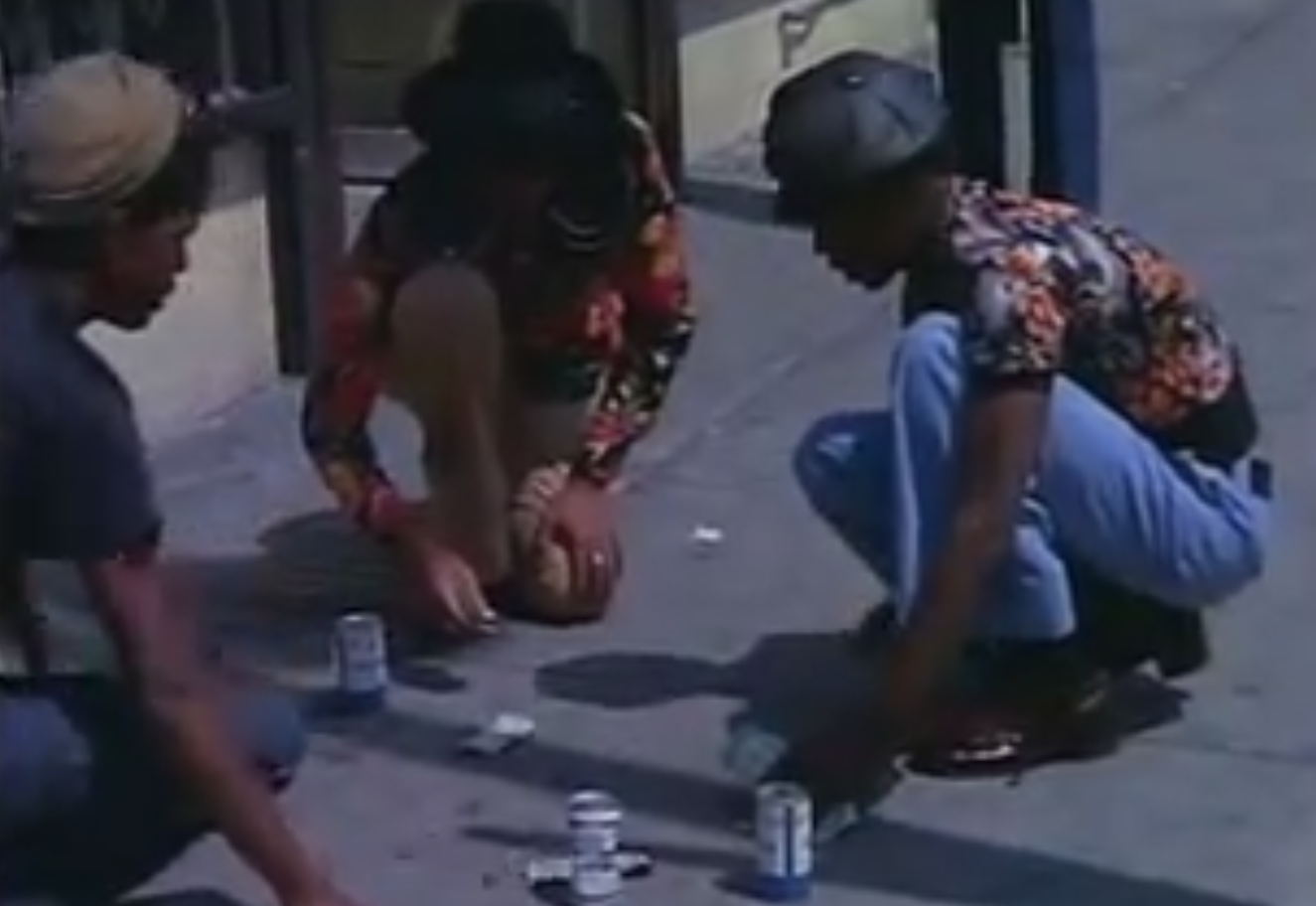 At this point, I’m just going full Team Abar. I don’t care about backstories or whether these should really be his priorities with these new godlike abilities. I’m just ready to see what divine punishment Abar has in store.

Here it comes. Give it to them, Abar! 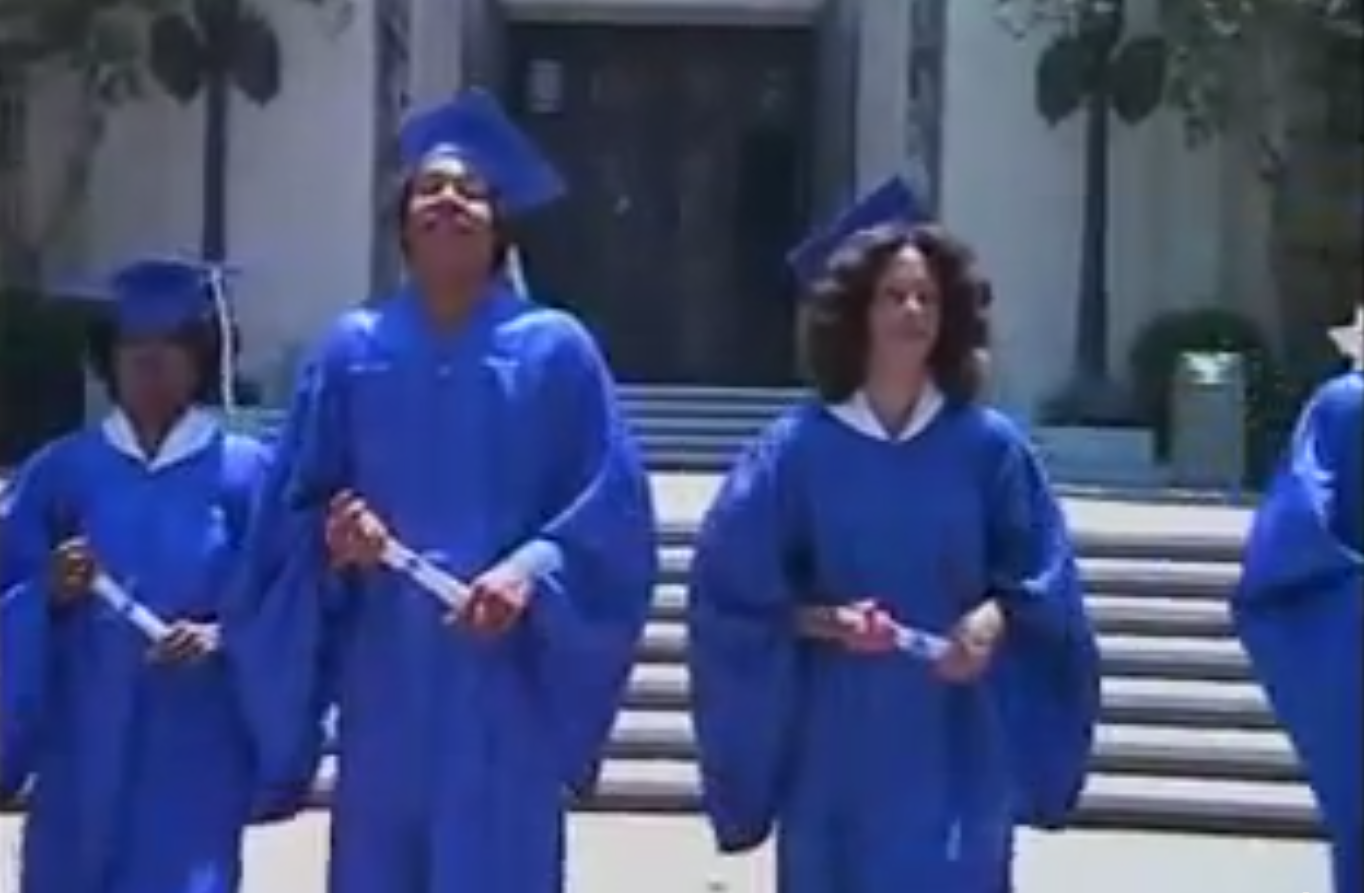 WHAT. Everyone else got punished, but these kids are now college graduates. Also, there’s now a pretty fancy school in the ghetto. Abar can really do anything. So how about some retribution to someone who really earned it? Remember that guy who ran over the kid? 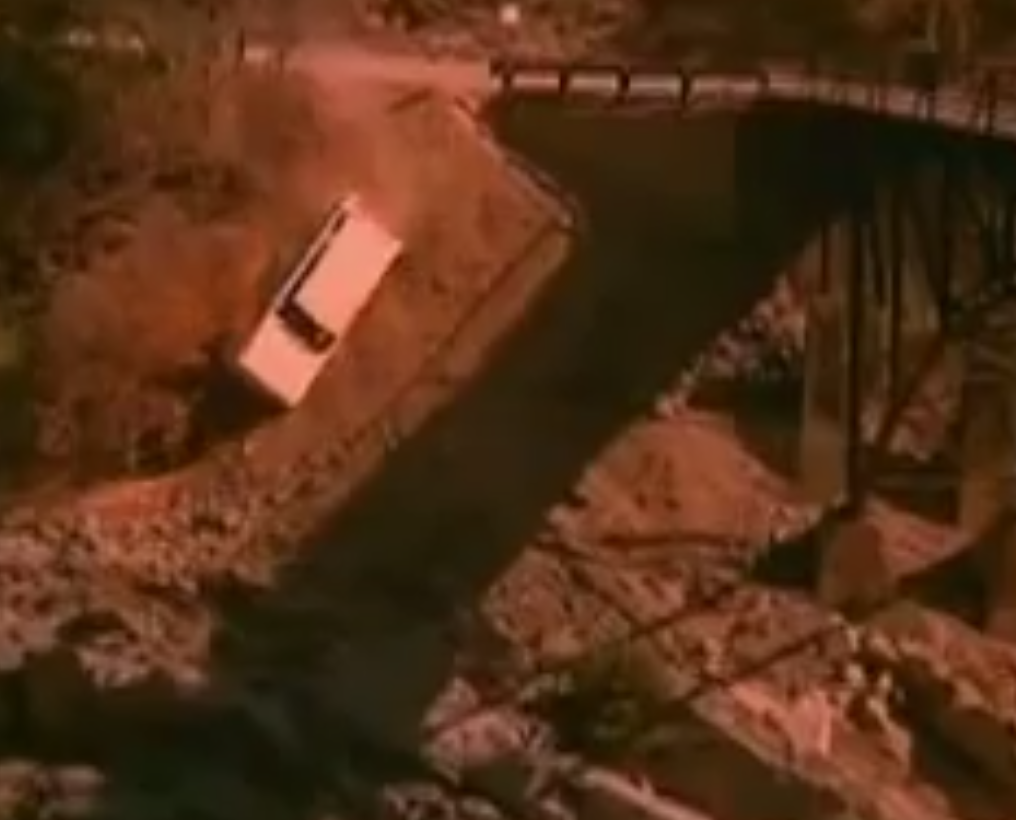 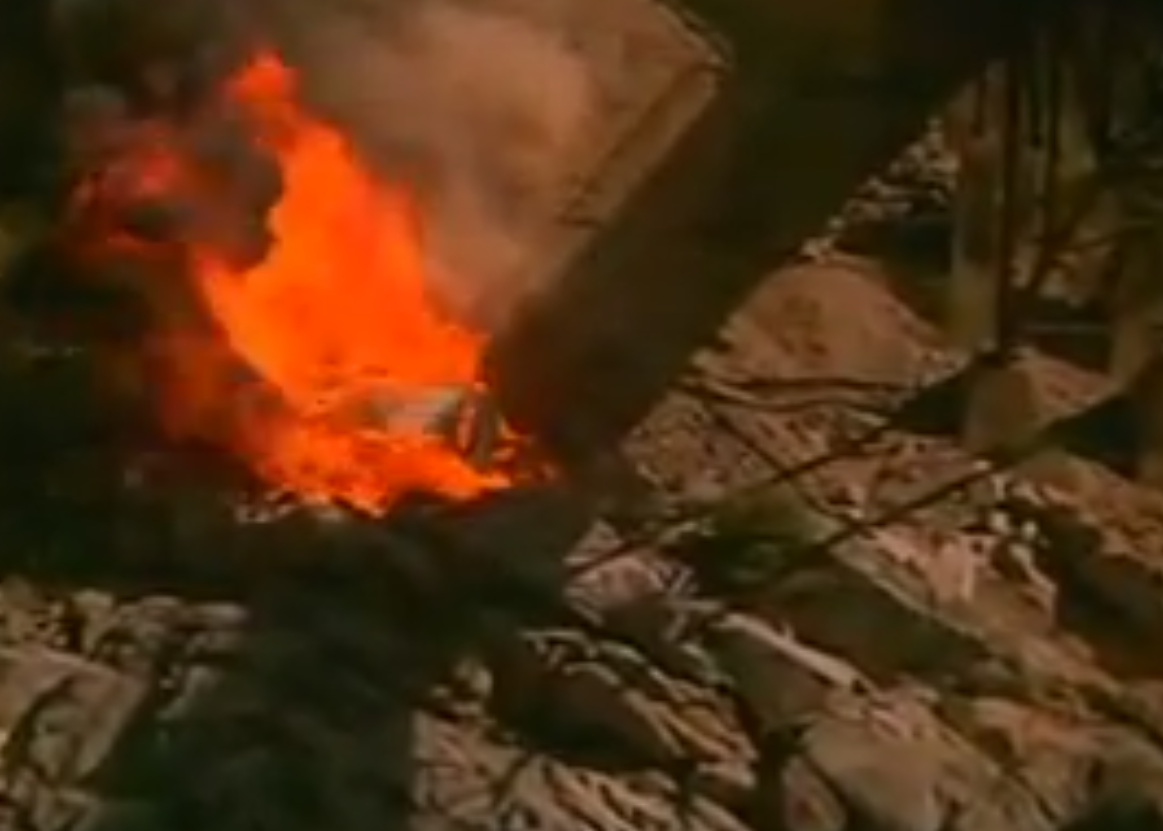 BOOM. Now that’s more like it. And all those other racists on the street? They start waking up with various plagues afflicting them. A snake in a woman’s bed, mice everywhere, etc. Rather than, I don’t know, call the police, they all run out onto the street to compare notes. That’s when Abar sends a lot of wind at them. Are they about to be blown away to their deaths?

Actually, the picture just grows smaller as we watch them struggle as a group against the wind, in a shot that weirdly reminded me of The Seventh Seal: 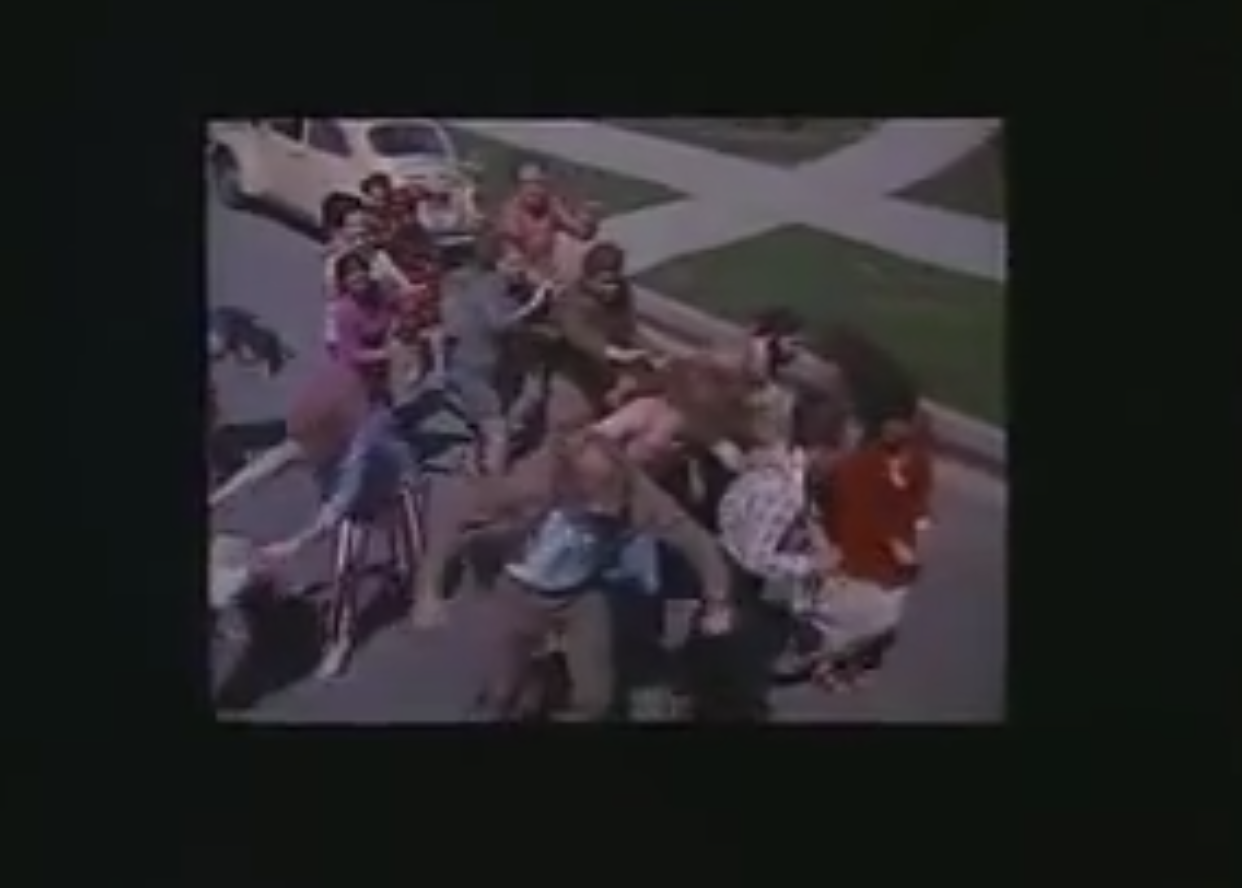 Then, they’re just gone. Where? Who cares! The Kincade family now seemingly has the block to themselves.

Except wait, that dark-haired white woman from the first picture of the racists, who was kind of the ringleader of them all along, comes out on the street unscathed. Why was she spared?

You see, she explains, I was only persecuting you because I’m a black woman who’s been passing for white, and was afraid everyone else would find out. 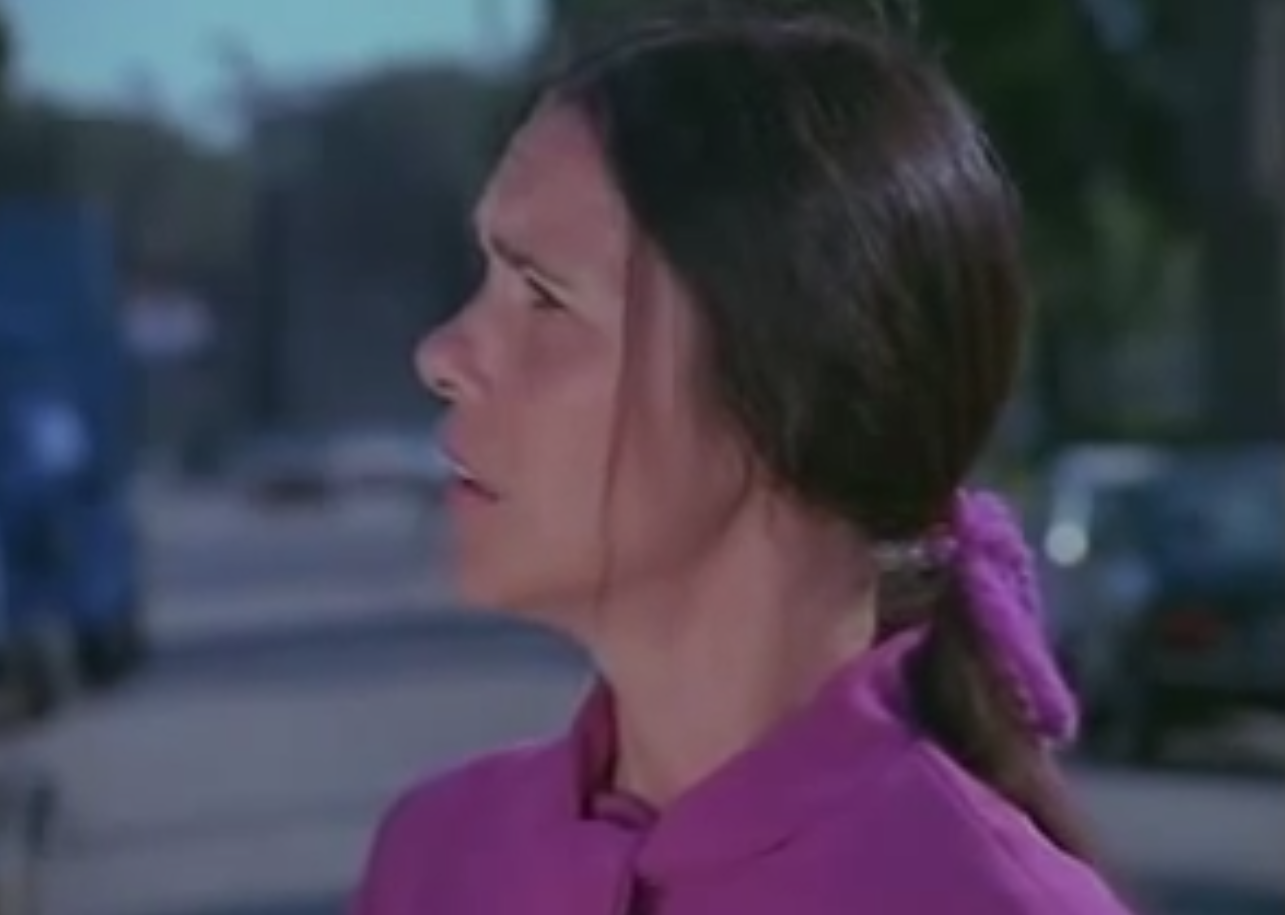 “I know,” Dr. Kincade assures her. “Your doctor told me you have sickle cell anemia.”

WHAT. WHAT. WHAT. I am not at all a doctor, but a quick Google check reveals the most it will do skin-wise is make skin a little pale or yellow around the lips and eyes. I’m like 71% certain that sickle cell anemia cannot have the side effect of turning black women white.

But in any event, everyone seems happy now, and Abar is a god, I guess, so that probably means better things ahead for everyone. Except priests whose car is too nice.