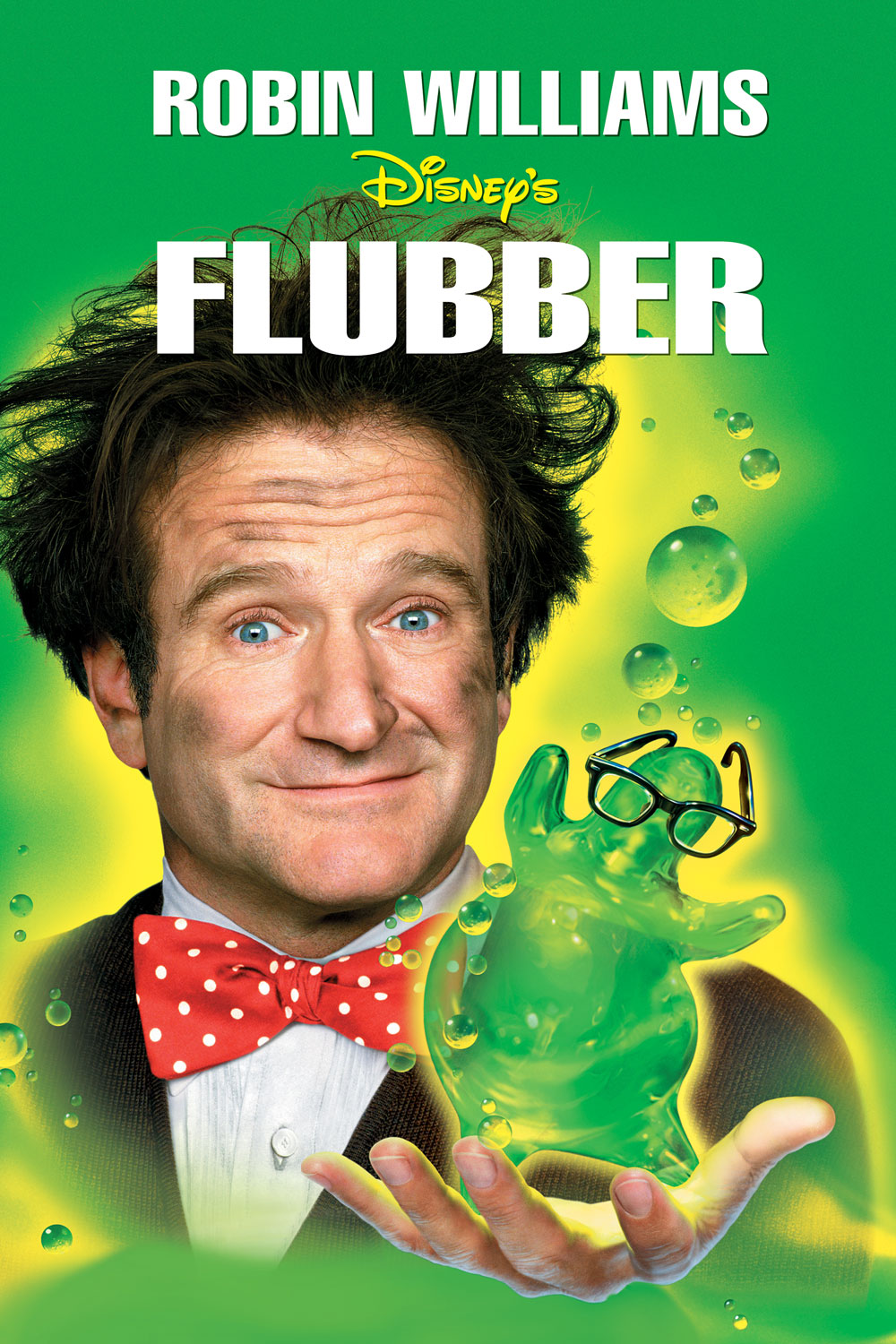 It’s pretty much official: Robin Williams was the king of the 90’s, and his career is a perfect accompaniment to obnoxious amounts of beer. After doing HOOK and JUMANJI (with MRS. DOUBTFIRE, FERNGULLY and ALADDIN still to come), the next stop on the dizzying tour of Robin Williams’ ridiculous filmography, is, fittingly….

When you watch a movie about a dumbass scientist (or Doc Brown wannabe) creating the world’s most mischievous and dangerous bouncy ball, his robot sidekick and Shooter fucking McGavin, I wouldn’t reprimand you for thinking Disney had come with a true American original. 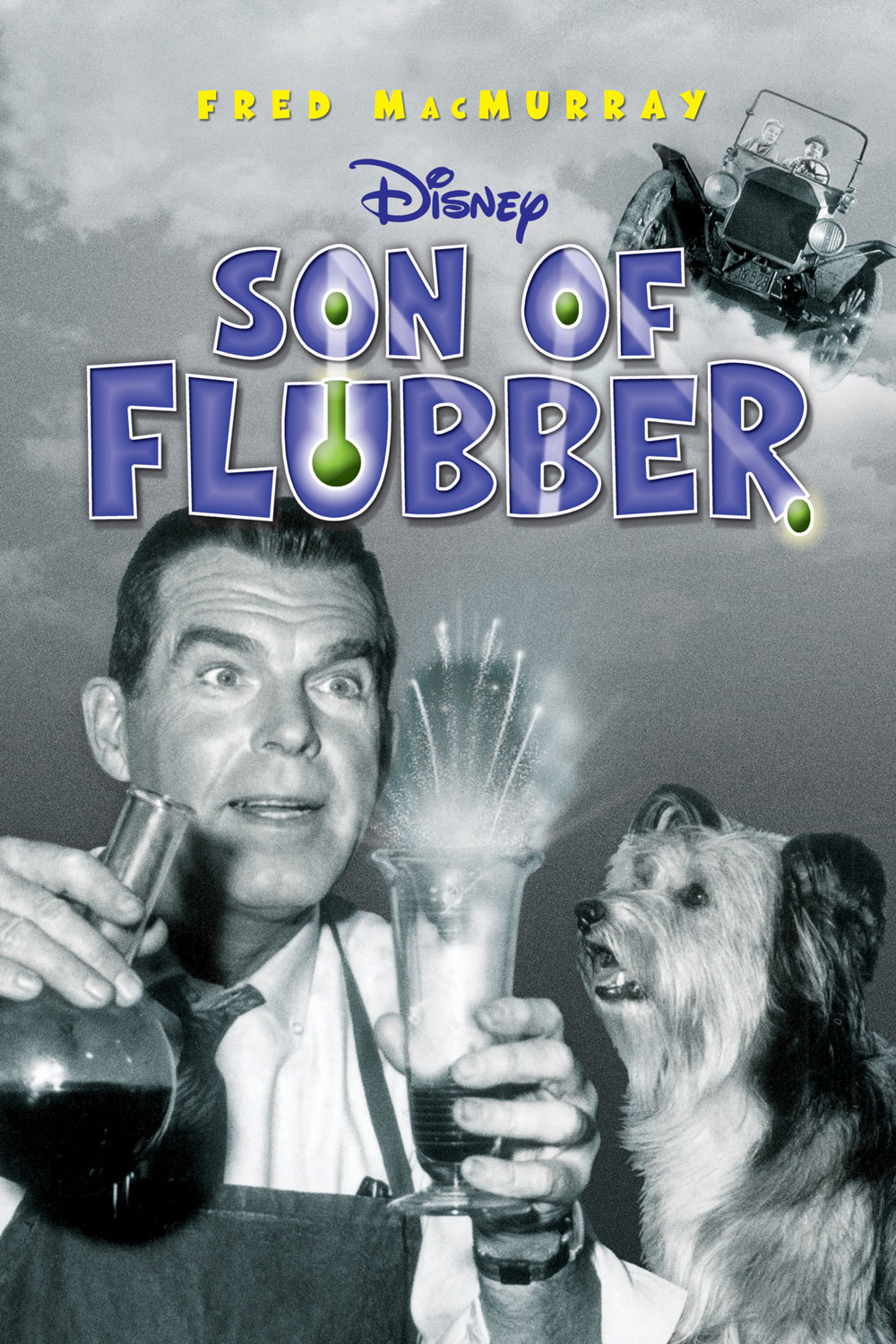 But that’s false. 36 years previous, Hollywood luminary (actor, singer, stud) Fred MacMurray (THE APARTMENT, DOUBLE INDEMNITY, THE CAINE MUTINY) was Professor Ned Brainard, or THE ABSENT-MINDED PROFESSOR (1961). In that film and the sequel SON OF FLUBBER (1963), he created an anti-gravity substance, flew his date and his dog around in cars, and changed pigskin forever: 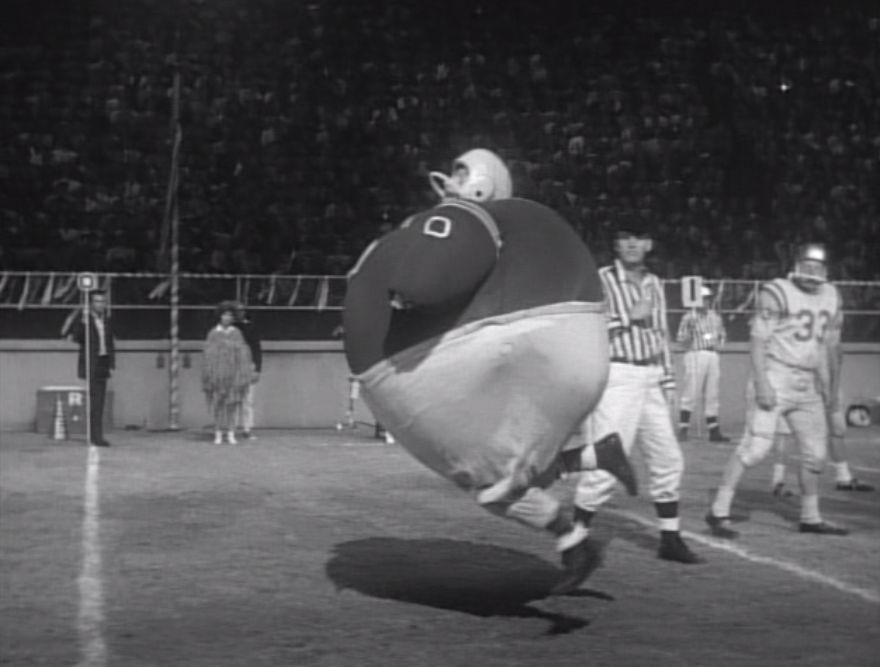 They also came up with the first werge (word merge) ever, because Flubber stands for…FLYING RUBBER. That’s bonafide history folks. 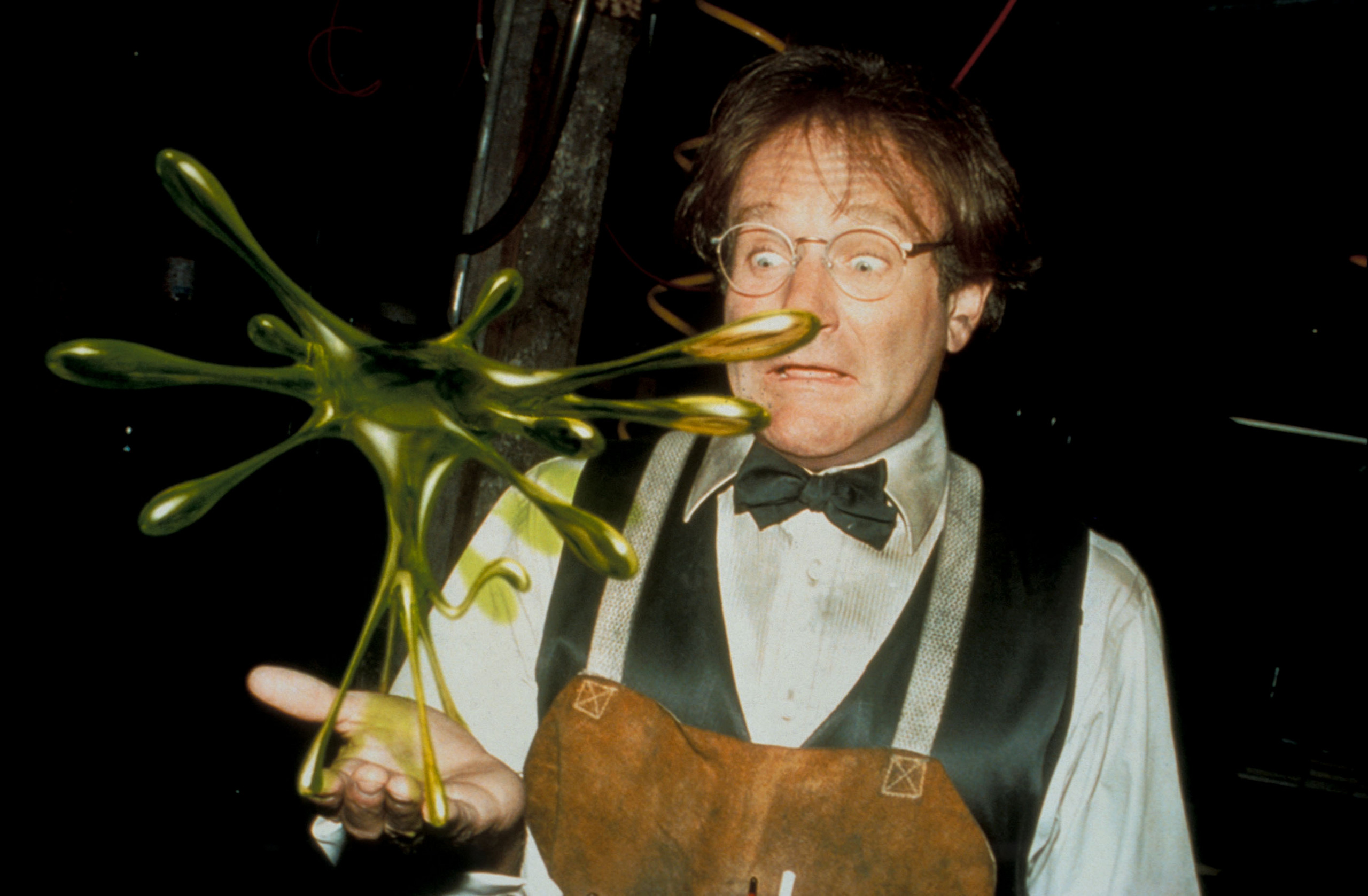 In FLUBBER, we get color (though a colorized version of SON OF FLUBBER came to VHS in 1997), Fred MacMurray’s replaced with Robin Williams who plays Professor Phillip Brainard (I prefer Ned as a name myself), and the dog sidekick is upgraded to a pain in the ass robot named Weebo (voiced by Jodi Benson, AKA Ariel from LITTLE MERMAID and Barbie from TOY STORY 3). Weebo is essentially Tinkerbell; she wants Peter/Phillip/Robin Williams, but is in the friend zone/a fairy/a miniature robot, and tries to sabotage Peter/Philip/Robin Williams’ relationships.

Football, an antiquated sport in 1997, is flipped to basketball, producing the greatest underdog story since SPACE JAM.

ENCINO MAN, BLUE STREAK and MIRACLE ON 34TH STREET director Les Mayfield also made the awful decision of casting Wil Wheaton as Billy Madison, or a dick-head character with rich parents, who flunks school because of Brainard.

He also added two goons, “cleverly” named Smith and Wesson, played by Clancy Brown (HIGHLANDER, SPONGEBOB SQUAREPANTS) and Ted Levine (THE SILENCE OF THE LAMBS). The big bad is played by Raymond J. Barry, who you probably love on JUSTIFIED. 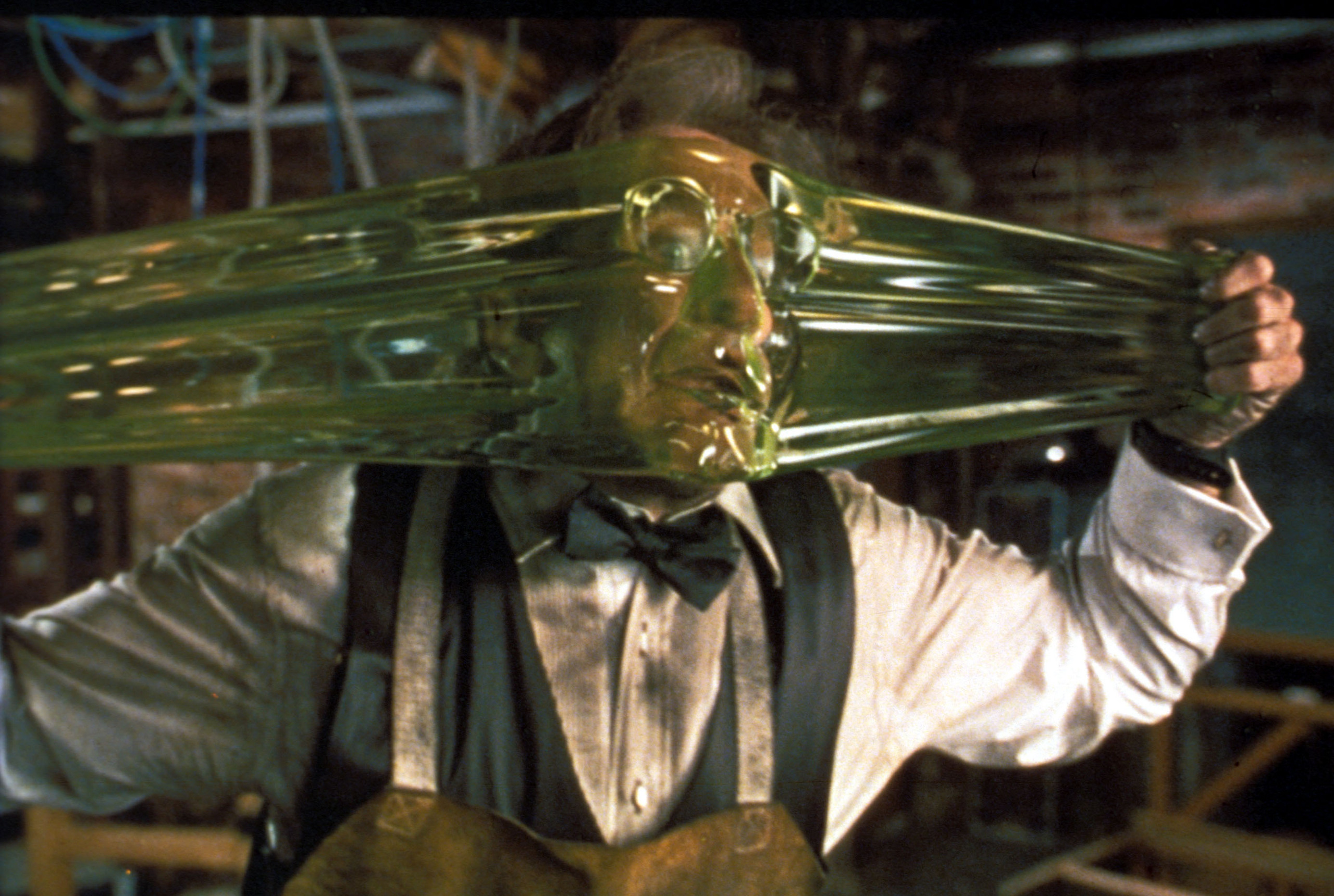 Les has also created the most unrealistic love story ever, as Marcia Gay Harden, who’s always a badass, no-nonsense chick from this role on, as if she promised to herself NEVER AGAIN, keeps going back to Robin Williams’ character after he’s forgotten her wedding MORE THAN ONCE. I think that’s a deal breaker. Especially when you have the sexy Christopher McDonald as the other asshole potential love interest.

Most of the genius likely came from co-screenwriter John Hughes, who you may have heard of. There’s compelling evidence to suggest that FLUBBER was John Hughes’ last and 7th finest achievement, unless you think DRILLBIT TAYLOR, HOME ALONE 3 or MAID IN MANHATTAN weren’t piles of shit. 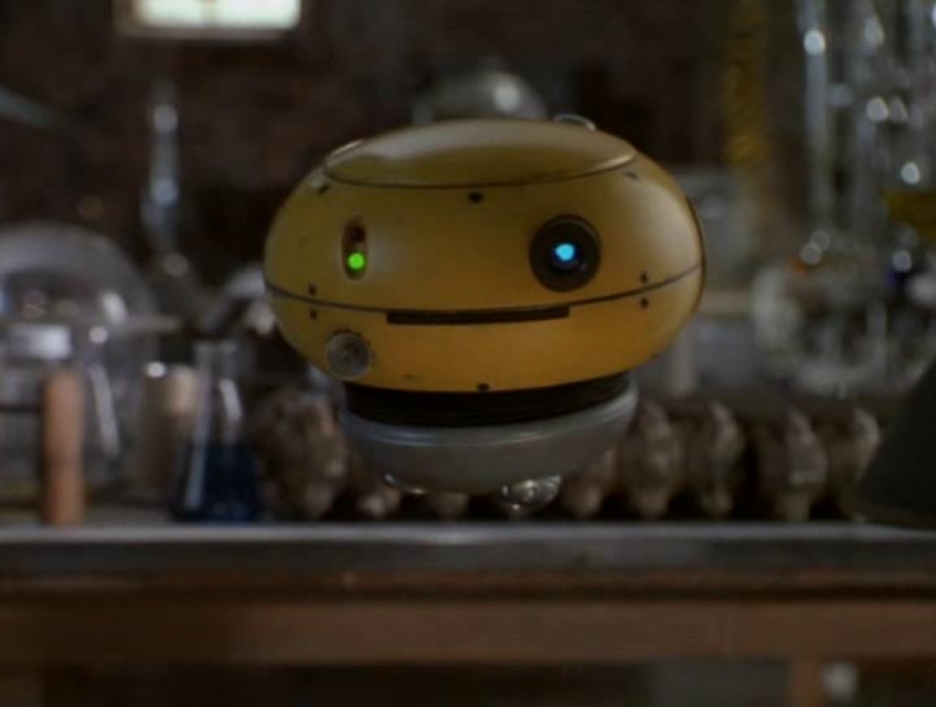 1. Drink whenever you want to punch Wil Wheaton in the mouth.

2. Take a sip whenever Professor Brainard touches or adjusts his glasses.

3. Drink whenever Brainard has changed his bowtie.

4. Have a drink whenever a character should be killed on camera, yet is completely fine. Example: Wesson (Ted Levine) gets hit by a bowling ball tainted with Flubber going hundreds of miles an hour, and barely gets a bruise.

6. “Drink for the Weebs”: Take a sip for every new video Weebo plays on her monitor. It should be noted that one of the only cats I’ve ever held affection for was named after Weebo. His name is Weebo.

9. Drink any time Flubber hits someone in the balls.

10. Take a sip every time someone utilizes their magical Flubber-fied shoes (see: the insane basketball scenes).

11. Finish your beer when you witness the illustrious “Flubber fart.” In SON OF FLUBBER, Professor Brainard created Flubbergas (SPOILERS: AKA the titular “Son of Flubber”), so this rule aligns with canon.

12. Drink every time there’s ridiculously fake science talk. I’d drink whenever I see a billboard filled with nonsense too, but I do that always.

13. Have a sip whenever that poor neighbor kid (who seemingly lives in every nearby house) gets terrified. Double if it comes right after his Dad tells him not to be scared.

EXPERT EDITION: Make your own Flubber, and play with these same rules with your friends. So, I’d anticipate you throwing your ghastly concoction at people’s balls. Be safe.