SDCC: The Musk of “Tusk”: An Evening with Kevin Smith 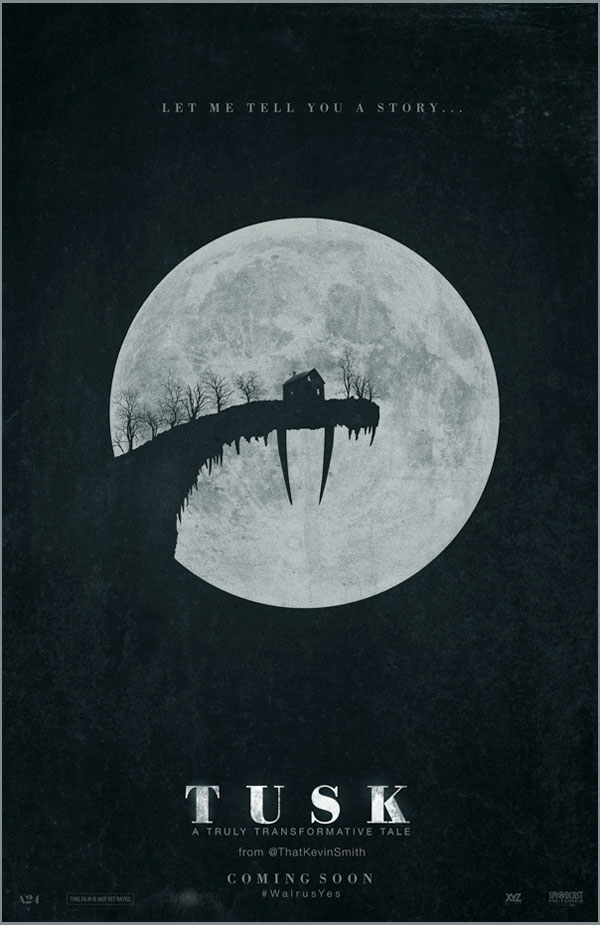 Kevin Smith and the elementary school bus taught me how to swear.

I was twelve years old when I stumbled upon a Red Band trailer for Jay and Silent Bob Strike Back online, and guffawed like an idiot at all the dick and fart jokes, pretending like I knew what half of the sex talk meant. I immediately researched Kevin Smith, and watched all of his movies in quick succession. While American Pie was the first R-rated movie with tits and sex talk in it that I watched, Kevin Smith’s films were the ones that changed my life.

While I’m probably guilty of some revisionist history, I credit X-Men with getting me into comic books and informing the nerdy pop-culture consumer that I am today. But, if it weren’t for Kevin Smith’s jaw-dropping and incredible “Quiver” arc on Green Arrow, a book I never would’ve got if not for knowing him from his movies, I might never have stuck with comic books, potentially robbing me of discovering some of the most essential facets of my personality and life.

I loved Clerks., even though almost all of the adult humor was over my head. Chasing Amy was boring and uncomfortable to me, until I watched it ten years later and it blew my mind. Mallrats may have made me laugh the most of all of his movies. Dogma only got better every time I watched it. Jay and Silent Bob Strike Back is probably my favorite film to rewatch and quote. I really love Clerks 2, as it’s the only movie of his I watched at the correct age, and the emotional impact came in waves because of it.

Each film I’ve anointed as Kevin Smith’s best at various portions of my life, as View Askew universe became the first film universe that I became obsessed with, before Marvel’s Cinematic Universe overshadowed everything else. Kevin Smith’s observations on life, Star Wars and his realistic dialogue spoke to me as a geek and a teen who didn’t know what the hell was going on, but loved jokes revolving around pussy, and people talking about pussy, before I was even close to sniffing some myself (pardon that image). In many ways, Kevin Smith’s movies replaced talking about girls with anyone, be it my friends or family or cool Uncle, as I wasn’t comfortable talking about them with anyone until I was well in high school. This likely explains a lot.

Kevin Smith’s unapologetic, uncensored brand of humor influenced my own. I wanted to talk like I didn’t give a shit, I wanted to swear, while also interspersing a morsel of truth and wisdom. I hate all the BS that comes out of people’s mouths. Smith’s characters spoke the truth, and their mind, no matter how idiotic.

Kevin Smith introduced me to dick jokes and to comic books, and that’s why some small part of me has never recovered from the Jersey Girl and Cop Out stage of Kevin Smith’s filmmaking career. Of course, until recently, neither had Kevin Smith.

Which is why I was so revitalized and delighted to see one of my heroes inspired again. At his annual Hall H panel, Kevin Smith regaled us all with stories (he’s one of the best storytellers we have; not many can be as hilarious with a mic in his hand) from his career and life, telling us all the gruesome details (I feel like I’ve heard about every sexual experience he’s ever had). He got me more jazzed for J.J. Abrams’ Star Wars: Episode VII than I thought I would ever be. Yes, Smith has a tendency to over-hype things (Affleck’s Batman suit), but he knows Star Wars, and the amount of joy he had at visiting the set speaks to how well Abrams has done in crafting the Star Wars universe, and I trust Kevin Smith’s opinion. He cried when he stepped on the deck of the Millenium Falcon, and became a kid again, and it seems like that foul-mouthed, enthusiastic kid is still inside Kevin Smith, and is ready to bring that brand back into cinemas.

He quit movies for awhile, disillusioned by the business, until stumbling upon the story of Tusk on his Smodcast. He was literally writing and creating the weird horror movie on air, as the creative process consumed him and Scott Mosher. Smith realized he needed to write and make this movie, and that all he needed was to make the small indie films that he made his name with again to be happy. The result is Tusk, a film that stars Michael Parks, Justin Long, Haley Joel Osment and Genesis Rodriguez, and according to Smith, is a super weird movie, but also the best one he’s ever done.

Smith’s already planning a True North trilogy of horror movies, which kicks off with Tusk, follows with a PG-13 movie called Yoga Hosers (with a female lead who kicks ass, something he’s wanted to do since having a daughter) and finishes with something called Moose Jaws. The latter is exactly what it sounds (Jaws with a moose), and had me giggling for hours after. I can’t say I wouldn’t rather see Smith do comedies, but I’m also intensely interested in this burgeoning micro-budget horror phase of his, precisely because he’s so absorbed and excited about it, and his enthusiasm is as infectious as a stink palm. Red State wasn’t bad, and a world where Kevin Smith is making horror movies involving walri and meese is a far better world than one without those things. Welcome back, Kevin Smith.

Toward the end of this rejuvenating evening with Kevin Smith, he unveiled the first trailer for Tusk (see below), coming September 19th. I’ll be there.