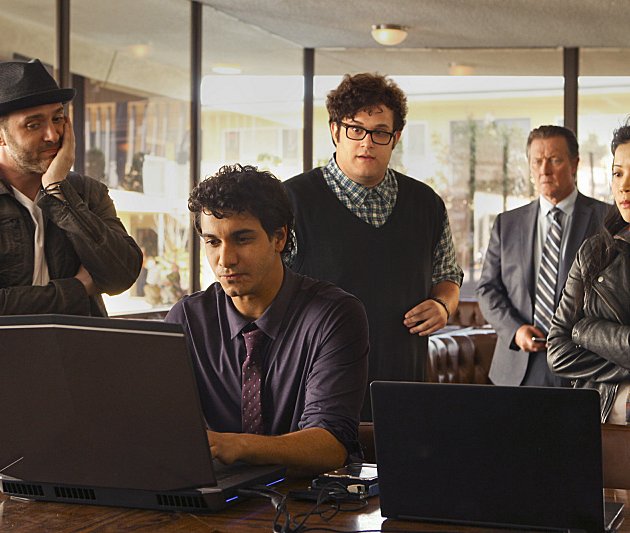 Frankly, CBS pisses me off sometimes. It’s so formulaic, a bastion of procedurals, acronyms and old-school/mediocre sitcoms carefully constructed for the average TV watcher. Aside from The Good Wife and Person of Interest, I hardly have any interest in any of their programs, yet they’re the #1 network because they’re safe, smart and adept at making TV that’s easy to consume for folks.

Scorpion feels a lot like that, with its “based on a true story”-ness branded from the get go, and a set of circumstances that just scream TV show. But afterwards, I couldn’t help myself from thinking: that was a surprising amount of fun. I have no doubt that it’ll be a hit, considering CBS’ track record.

We start in Callam, Ireland, where the U.S. government lands, bearing firearms. Turns out, someone has hacked into NASA. Also: that someone happens to be a little boy. Agent Cabe Gallo (Terminator 2: Judgment Day, True Blood), made to look younger the same way as Professor X in X-Men Origins: Wolverine (in other words, he looks terrifying), snatches him anyways.

In the present, we see the adult version of that genius, Walter O’Brien (Game of Thrones‘ Elyes Gabel), at a cafe, breaking up with a gal. It’s clear he doesn’t know how to communicate, but it’s unclear how he seduced a beautiful woman in the first place. His dysfunction is heightened because he’s at the cafe to fix their WIFI (it’s also unclear what happened to this brilliant hacker that he’s now stuck in a Burbank cafe fixing internet). Groan. On his way out, he notices that the beautiful waitress/future love interest Paige Dineen (Smash‘s Katharine McPhee) has a “weird” kid. He notices one of his own, and communicates with him via salt shakers at the diner, something we’ll learn more about as the episode progresses.

Walter returns to a basement, where he finds Sylvester Dodd (Ari Stidham) and Happy Quinn (Jadyn Wong), two members of his ragtag group of geniuses, a brainiac Avengers with people problems. Sylvester is a Mathematical force to be reckoned with and a chess prodigy, but he also has severe OCD. Happy Quinn is an engineering mastermind and dynamic mechanic, but also a sardonic car thief. Then there’s Toby Curtis (American Pie‘s Eddie Kaye Thomas), who’s essentially a psychiatrist that is able to make Psych/Elementary/Sherlock/Mentalist-like observations because of his keen knowledge of the human condition. He’s also a gambler/troublemaker who we’re introduced to running from criminals, wearing a douchey hat. Walter started a company (called Scorpion) with this band of misfits two years ago, and they’re somehow struggling to pay rent. We’re supposed to believe it because they all have flaws, and can’t connect with normal people…but with their abilities and brainpower, that shouldn’t even matter.

Enter Agent Cabe Gallo from earlier, busts into the warehouse, needing Walter’s help. 56 flights have their communications systems down, and need landing guidance, or else they could all collide in the sky, or worse. Gallo offers them each $50k for the job. Walter doesn’t trust him, because of the troubles in their past, but can’t afford not to take the gig. Everything up to his point is SO manufactured, and so CBS, but once Walter and his team get to working, and we see the kind of dialogue and banter we’re going to get week to week, as well as how their unique set of skills work together, it’s undeniably enjoyable to watch. It’s smart, quick, and we’re gifted some insight into what men and women with unseemly IQ’s are able and unable to do. There are many misconceptions about IQ’s, and Scorpion seems keen to educate the general public, while celebrating intelligence rather than mocking these individuals (who lack in EQ what they have in IQ). I find it fascinating that the man (the real Walter O’Brien) with the fourth highest IQ in the world has a say-so on this TV show.

While it makes little sense that Walter and company return to the Burbank cafe (they need its stable wireless network to hack into the CIA), you go along with it. Around then is when we learn why Fast and the Furious director Justin Lin was hired to direct this pilot, as we’re privy to one of the most ridiculous action sequences I’ve ever seen. Planes, cars, and plugging in computers, all at once. It’s so over the top bonkers, that it can’t help but be thrilling and fun.

Along the way, we learn that Paige, the only “normal” woman, is the missing piece of the Scorpion puzzle: she can “translate the world” for them. What’s routine for each of them is vastly different. Plus, she’s hot and has a wunderkind kid she struggles to communicate with. That’s where Walter and company come in. I’d argue that Katharine McPhee is miscast (as an actress), but while you roll your eyes at her addition to the team, you forgive it because of the dynamic it will create.

After writing this review, I’m wondering why I didn’t hate this pilot, but I think it’s because the show seems to have its heart in the right place, and I was surprised by how clever it all was, in between the nonsensical plot.