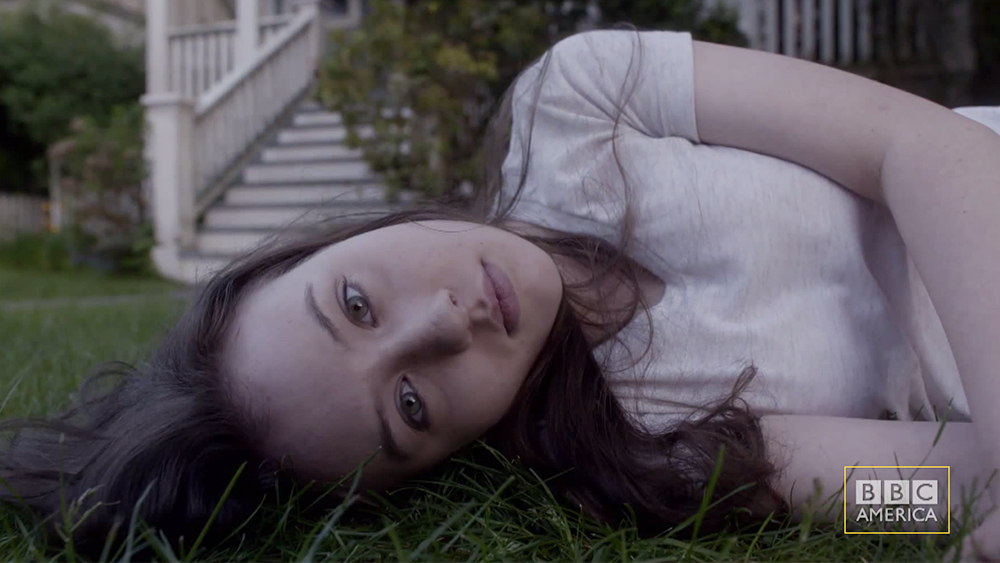 I don’t know what I just watched, but I know it’s freaking good. BBC’s brilliant streak appears to be continuing with Intruders, a horror/sci-fi show set in the Pacific Northwest from Glen Morgan (X-Files) and Julie Gardner (Torchwood). The pilot, “She Was Provisional,” is a slow burn that leaves your stomach in knots and your brain befuddled, buoyed by excellent acting and beautiful filmmaking. This was probably the most promising pilot I saw at Comic-Con, though I admittedly missed Gotham.

Two men, or intruders (played by Jackie Brown‘s Robert Foster and True Blood‘s James Frain), break into a home in the middle of the night, and accost Donna (Katherine Evans), a teenage girl, desirous of her secret. They shine something in her eyes, and soon Donna is vomiting and speaking in tongues. She wakes up on the lawn in the morning, writes her secret on a pad of paper (“I am not Donna.”), then kills herself in the bathtub. That’s how you start a pilot.

Now onto Seattle, where Richard Shepherd (the aforementioned Frain), comes a-knocking, which we know isn’t a good sign. He demands to know where William Anderson is. William’s wife (presumably) doesn’t know. He quickly shoots the woman and her son.

In Birch Crossing, a make-believe quaint port town in the Northwest, former cop-turned-author Jack Whelan (John Simm, or the Master in Doctor Who), prepares for his wife Amy’s birthday. Amy (Academy Award winner Mira Sorvino) doesn’t like her birthday, but that’s clearly not the only thing wrong with her. She’s depressed, off, and weird. Jack walks in on her dancing to jazz alone, and she admonishes him for walking in on her. That was private, she says. Um, okay. Then they have sex, her pupils dilate a crazy amount, and in the morning, she’s disappeared. Her normally busy calendar is empty after her birthday, her hotel has no record of her staying there, and when Jack calls her office, they haven’t even heard of her. Hurm.

In Reno, Oz Turner (The Dark Knight‘s David Dastmalchian) talks about William Anderson and the people who killed his family, uncovering a conspiracy on his podcast. Shepherd is listening, and makes contact with Oz. You know that’s not a good sign for Oz.

On the Oregon coast, a pale, creepy girl named Madison (Millie Brown) celebrates her birthday as well, though is about as happy about it as Amy. She runs to the beach, where she finds Shepherd there. Uh oh. She yells at him to go away…and surprisingly he does. Like Amy, her pupils dilate, and when Shepherd returns, he asks to speak to Morgan. Is Morgan another personality? Someone who’s possessing Madison? A spirit? An alien? So many questions.

Meanwhile, Gary Fischer (Tory Kittles) pays Whelan a visit. He’s a lawyer, and an old friend of Jack’s, who wants to talk (but is very wary of speaking near Amy). He tells Whelan the story of Bill Anderson, thinking it could be Jack’s new book. But it’s clear that’s not all he’s trying to tell Jack, considering the tension between them. Who the hell is Bill Anderson and why does everyone want to find him? What/who are these Intruders? What’s the significance of these secrets they kill for? Are they merely serial killers, or are they protecting us? I have my theories, but I’ll hold off on now.

All of these elements and more come together in an eerie, foreboding opening hour of what promises to be another BBC sensation that delves into immortality, identity and dark and dreary happenings. It’ll require patience, but unlike HBO’s The Leftovers, this bleak show has immediately grabbed me, making me want to know the answers and more about these characters, and doesn’t seem to be depressing merely for the sake of being depressing. It’s not relying on its central mystery solely to hook an audience. Its got a lot more going on than that.

BBC’s Intruders premieres after Doctor Who on August 23rd, 2014.