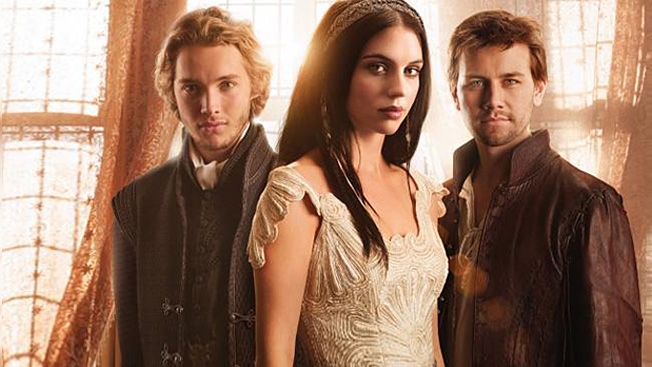 I’ve seen the pilot of Reign, so I think I was the biggest fan of the show in Ballroom 20.

We got Adelaide Kane, Megan Follows, Toby Regbo and Laurie McCarthy (executive producer) for the panel. Over the course of the panel, I fell in love with Adelaide, who is like a British Aubrey Plaza, without being standoffish.

“Anything can happen on Reign.” I’m sure every show thinks the same thing about themselves. Also, it’s just not true.

What’s ahead for the show? Well, Francis is King, Mary is Queen of everywhere, and Francis has fathered a bastard son with Mary’s best friend, so there will be marital complications, as they explore that relationship.

Catherine will hate her new job as Queen Mother, and Follows misses her “horribly delirious marriage on fire” with Henry.

With darkness killed in season 1 (that seems impressive), the Plague is coming and will land at the castle. Not everyone will survive it (though the joke is that they’re all dead by episode 3). There’s also new power players coming to court.

In regards to Mary’s fertility: “Everyone’s interested in my ovaries.”

In case you didn’t know, pretend sex on camera is super awkward.

The moderator references Wikipedia when suggesting that Toby’s character is going to die. News flash: they’ve all been dead for ages. Toby retorts that Francis’ wikipedia page also says he has distended genitals, which is clearly not the case on the show.

The show takes “advantage of history,” using the big, dramatic signposts to create/use for drama.

If Reign was like 24, it’d use a sun dial to show the time, a concept/sketch idea I love/will never use.

I learned so many new shipping terms: Frary (Francis/Mary) and Mash (Bash/Mary). Apparently Bash and Mary’s relationship is on ice, though they’ll remain having a “special relationship” and will always be in her heart. They just won’t bang, which is Kane’s words. I thought she was like 13 on Teen Wolf, but she’s easily 23 (whoa: she is 23, 24 in August).

Kane refreshingly calls love triangles “bloody boring,” and is happy that the Bash/Mary/Francis one is squashed, and not in perpetuity. I love that she used the word perpetuity, and her opinion on this.

Catherine is getting future lovers. This is the CW, so I don’t know if that qualifies as news.

Kane thinks the costumes are awesome/uncomfortable. She’ll be crippled by the heels, but “doesn’t matter because they’re cute.” Somehow when she said that, I found it endearing rather than face-palming drivel.

We got a trailer for the second season, which involved a lot of dramatic staring and a shit load of sick people. The plague, people.

We also catch a glimpse of The Messengers, a show about 5 people who get a warning of the apocalypse (seems like it should’ve been 4, so they could’ve been the horseman, so every show can use that concept). It has the Super 8 kid and the “dreamy” dude from Revolution, as two of the five people who get visions, and maybe wings. It actually looks fairly compelling. There’s a better chance I watch it than more Reign, though I’m convinced Adelaide Kane is a star. She watches Game of Thrones, after all.