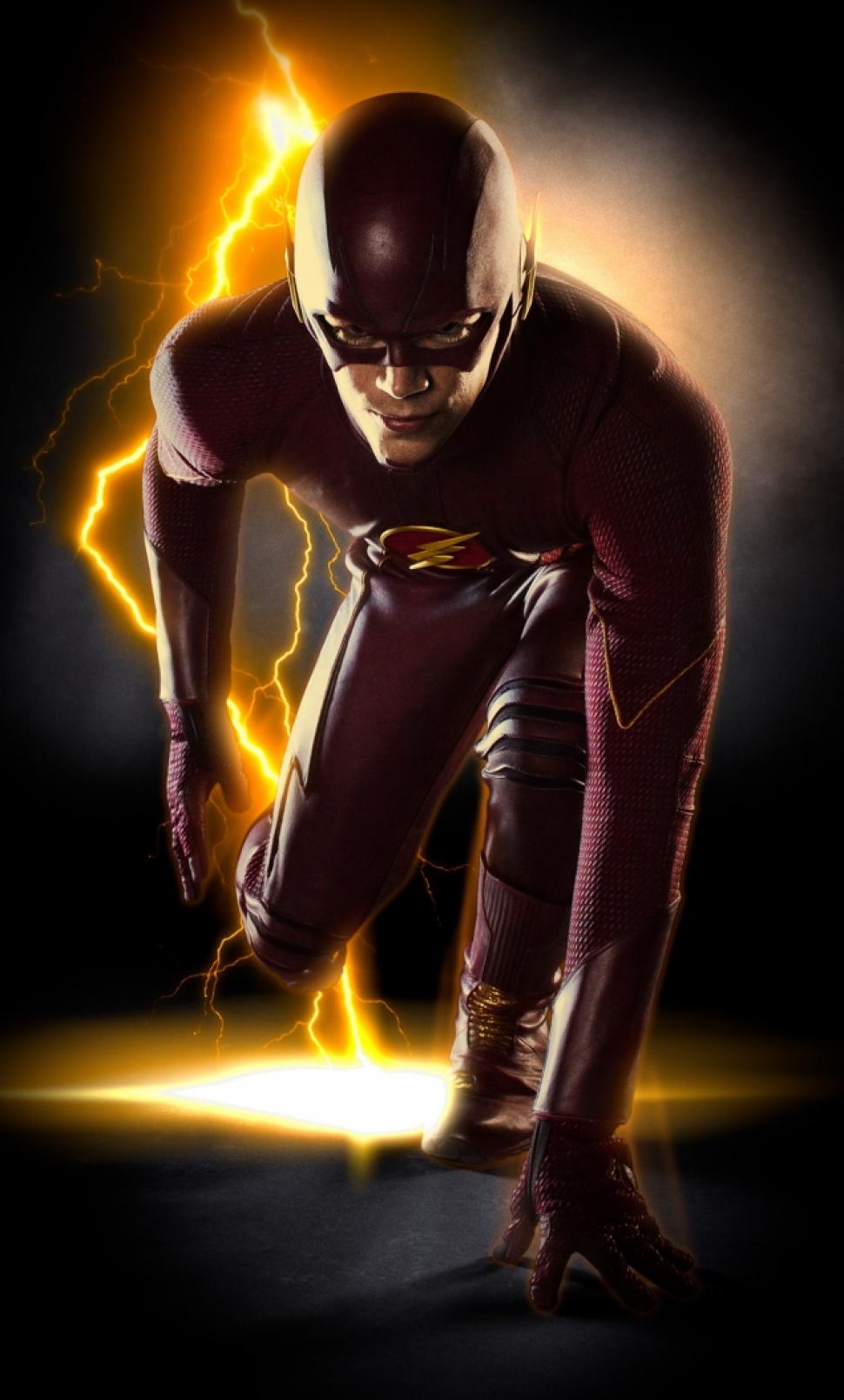 It’s the 7th year of Warner Bros. and Comic-Con Preview Night. That means we get to see fall pilots months before they finally air, so we can talk shit or rave incessantly before most of y’all. This year’s lineup includes CW’s The Flash, NBC’s Constantine, Cartoon Network’s Teen Titans Go! and NOT CW’s iZombie, because of some casting changes. That certainly doesn’t bode well for the Rob Thomas show, but then again, they might be fixing the issue.

There are plenty of issues with CW’s The Flash, however, and I’m not sure they necessarily need fixing. This show really is Smallville redux, with the S.T.A.R. Labs particle accelerator mishap as the nexus/hellmouth/Nemeton/meteor rock generator for super powered (meta-humans, they call ‘em) heroes and villains. It’s also boundlessly cheesy, and not striving for the gritty Dark Knight world that Arrow drowns itself in every week. This is Flash, which is quirky, and will make you black out drunk if you drink for every fast/speed/running pun during the proceedings.

And let’s get to them, shall we? This episode hurtles you into the plot as fast as the fastest man alive, which would be Barry Allen. He was bullied when he was a kid (because of course; his glum comment to his parents made me gag: “I guess I wasn’t fast enough.”). His Dad, Henry Allen, calls him “slugger” for some reason, clearly wanting his son to win some of these fights (instead of hoping his son would avoid getting his ass kicked). Then, lickety split, 11 year old Barry wakes up, and finds violent red/yellow electricity orbiting his mother, Nora Allen. His Dad, or the Dad (John Wesley Shipp AKA Mitch from Dawson’s Creek AKA 1990’s Flash AKA why he’s on the show), joins Barry downstairs. Then Barry finds himself blocks away. When he returns, his mother is dead, his Dad is arrested as the killer, and Barry’s life officially kinda sucks.

Now an adult/or whatever Grant Gustin is, Barry has become a CSI for the Central City police force, and he’s always late (har har). Cliché Tough Guy detective (Person of Interest’s Al Sapienza) and Detective Joe West/replacement father figure find themselves at the scene of a bank robbery (where the Mardon brothers are at it again, those hoodlums). Barry arrives, Detective West (Law & Order’s Jesse L. Martin) covers for him, and Barry proves he’s worth the wait, using some residual Mentalist magic to figure out the make and model of the car based on its tire track, while also getting a poop sample, because all bank robberies involve excrement in some form (look it up).

The “poop problem” is soon (gratefully) solved, as he tracks the shite to one of four cow farms, letting him and Iris West (Candice Patton) AKA a woman who couldn’t Friend Zone him more, to go to S.T.A.R. Labs for the unveiling of the Particle Accelerator. Iris and Barry grew up together, she wants him to find someone, but she also sees them as almost like brother and sister. Because this is the CW and not HBO, that’s not going to be a turn on any time soon. Comic readers know that Iris West becomes Mrs. Barry Allen, but it’s clear that’s a long time coming (if ever; Danielle Panabaker’s Caitlin Snow is jockeying to be this show’s Felicity Smoak, and may very well succeed). His sexual frustration is only compounded because of the presence of Detective Pretty Boy (Rick Cosnett). I won’t even bother to look up his name (okay okay, it’s Eddie Thawne; not as good). Also, and this is the biggest stumbling block: I can’t say I liked Iris West in the slightest, as she seems doomed to follow in the footsteps of one Laurel Lance.

There’s just unintended hilarious moments littered throughout the episode. Iris and Barry are watching Dr. Harrison Wells (Ed and Scrubs’ Tom Kavanaugh) speech before he accidentally (?) unleashes the particle accelerator upon the unsuspecting Central City, when Iris gets her bag stolen. “It has my dissertation!” she cries (back it up in the cloud, grrl). Barry runs after him, and while he does catch up to the douche, he gets pummeled by the laptop bag in the process. Detective Pretty Boy is there, however, to save the day. Oof.

Elsewhere, West and Tough Guy Partner track down Clyde Mardon (Chad Rook) to a farm (good on Barry!), and soon, Clyde kills Tough Guy Partner, makes his escape (“I’ve got a plane to catch”), though that turns out badly when the particle accelerator explodes, shooting energy all over Central City. It blows up the plane, electrocutes Barry, and is what one would call the inciting incident/origin/hero is born moment.

Barry wakes up 9 months later (“lightning gave me abs?” is the best line in the pilot) to Lady Gaga’s “Pokerface” because guy-who-makes-toys-and-grins-more-than-the-Joker (or Cisco Ramon/the odd’s on favorite for my least favorite character) saw Barry liked her on Facebook. Whatever. It’s not long before Barry realizes the lightning gave him extraordinary power: he’s super fucking fast now, and I like that Harrison Wells, Caitlin Snow and Cisco (Carlos Valdes) all know about his gifts immediately (he does wake up in their lab, after all), as they test him in a goofy red suit that shows off Gustin’s nuts. While Barry’s learning curve is ridiculous, I suppose that makes sense given his power. Before too long, Cisco has Barry in the Flash suit, and before too long he’s fighting crime, after getting a pep talk from a certain emerald archer in Starling City (“the lightning chose you”), which made everyone in Ballroom 20 wet their pants. When both of them watch the other do their thing, they each say “Cool” in such a cheesy way that I walked out of the convention center with diabetes.

But who?! It’s clear that Barry isn’t the only one affected by the lightning storm. Nay: Clyde Mardon survived the plane explosion/crash landing/lightning bolt to the dome, and gets weather manipulation powers. Meet Weather Wizard (or “Fog Man” as I wrote in my notes), the first of Flash’s venerable Rogues (or more accurately, his brother). Hopefully it’s not a sign of things to come. Somehow, he’s even lamer than Storm. The actor is dreadful, blessed with a sneer born to be on a Most Wanted poster or mug shot, but not much else. He makes dumbass hand gestures whenever he summons “weather,” but does unfurl a pretty nifty tornado that he’s bringing directly to Century City, once he’s moved up from bank robbing.

I certainly like that The Flash is aiming to be lighter and goofier fare from Arrow, but some of the dialogue made me want to take the Flash’s lightning bolt logo and jam it in my ear drums. While they all represent traditional archetypes (and sometimes painfully so), the pilot successfully lays out tangible character dynamics and relationships, with clear paths for all of them to follow. I particularly want more Caitlin Snow, Harrison Wells and Daddy Allen. The speed effects don’t seem much different from Smallville, but they certainly have their moments, especially in the climactic scene (a Wells pep talk is all Barry needs to learn his powers). I’ll be intrigued how quick Flash delves into its Rogues Gallery and Barry’s Wall of Weird (they might as well call it that; Chloe 4 life), but the biggest hurdle has been achieved: Grant Gustin is charming, funny and bumbling. He’s like Peter Parker without the sarcastic quips. Hopefully Barry and The Flash stray away from milquetoast in its debut season.

-At S.T.A.R. Labs, there’s an animal cage broken out of, with a name tag: GRODD. Gorilla Grodd may actually not be too weird for this show, which is awesome. Apes really are taking over the planet, and if the CW can somehow cast Andy Serkis in the role, this show just won all the Emmy’s.

-I love that Detective West finds out about Barry’s powers and is on his side from the start. It’s kind of funny that he goes from yelling at Barry to give up on his father’s innocence and his crazy theories, to believing EVERYTHING, because it’s not like Barry having powers means his father is innocent, necessarily. I also don’t like that he actually tells Barry not to tell Iris for her safety. Because lies and secrets keep people safe, as we’ve all learned.

-First there was Blur. Then there was the Hood. Now there’s…the Red Streak. I don’t think it’ll last long, since Ollie gifted Barry with the Flash nickname immediately. Thank Krishna.

-Barry and Dad have a tear-filled convo, complete with the hands against glass moment. Barry’s insistence that he believes his Dad’s innocent is all his father needs. I get that he appreciates his son’s loyalty, but WHAT?! Why is he so willing to just fester away in Iron Heights? Maybe he has his reasons…

-Harrison Wells is NOT a cripple, and clearly has some nefarious plans. Or definitely secrets. He brings up a newspaper from 2024 with the headline: “Flash vanishes, missing in crisis.” Not only is this a nod to THE Crisis of DC Comics fame, but it’s a mindfuck, and a cool glimpse of the future. CW is clearly pretty confident with the show if it’s projecting events ten years in the future. That said, I doubt this nugget doesn’t take 10 seasons to hit home.