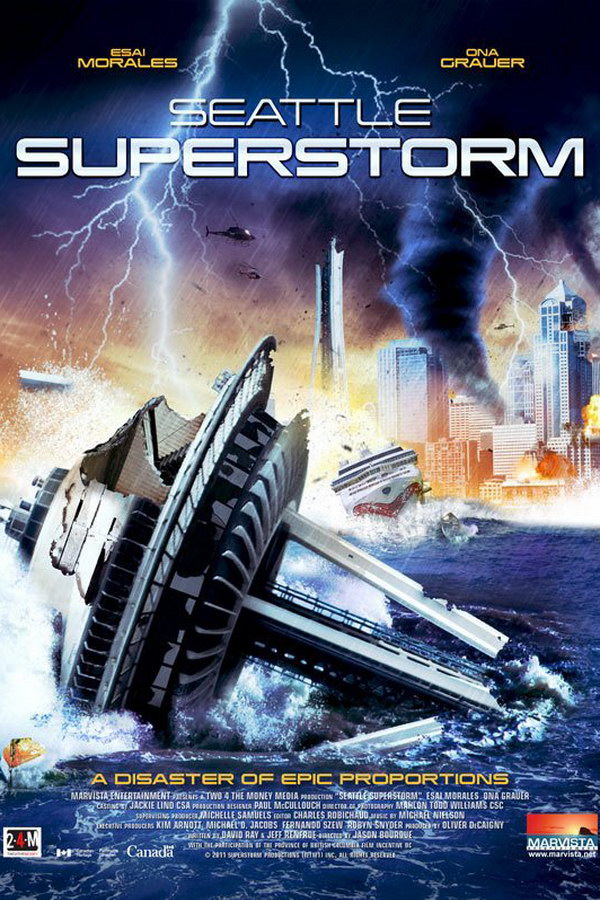 You likely haven’t heard of SEATTLE SUPERSTORM, one of SyFy’s sci-fi tales of woe and weather. Unfortunately for you, that’s about to change. The 2012 release stars CAPRICA’s Essai Morales and a slew of actors I can’t even pretend to care about. You don’t need me to tell you it’s a disaster film set in the wonderful city of Seattle, and it’s a crap one. The film is boring, poorly acted and isn’t even really a good bad movie. That’s where the booze comes in.

Grab a 6 to 12-pack of your choice (I recommend a local beer), and a group of friends of your choice, and sit down, relax, and play a drinking game to….SEATTLE SUPERSTORM. While no one in the movie screams “We must stop this Seattle Superstorm!” (I know), you will by the end of this Movie Drinking Game™. If you can avoid a whole night where no one mentions the ugly context behind the “clever” title, you’ve already done better than I.

THE SET UP: Drinks, friends, maybe a couch, preferably a guy or gal from Seattle in attendance. Don’t be the guy who makes Starbucks themed drinks or brings an umbrella ironically.

1. A Seattle native references Seattle (“The Pike Place Market is soooo funnn blah blah blah”) or goes on a Seattle-related tangent (“The Space Needle was unveiled during the World’s Fair in 1962…”), or bemoans the inaccuracy of the Seattle landscape depicted on screen (“Oh, I’ve been there. Vancouver, I mean.”).

4. …If someone in the room thinks that the DMA (Disaster Management Agency) is a real thing.

5. …any time you see a “suspicious” object. Double it when they get shot down.

7. …any time there’s a weather change. And whenever there are gutless Seattle has bad weather jokes.

8. …for every Starbucks reference (there isn’t any).

EXPERT LEVEL: Drink every time the kids, Wyatt and Chloe, make you want to murder something.

Disclaimer: Please drink responsibly, and for the love of Shawn Kemp, don’t drive after playing this drinking game. Don’t use 4 Loko’s, or else you’re stomach will be hosting the super storm.