Joshua Jackson Tackles the Truth in “The Affair” Season 2

This past summer I was granted the opportunity to cover a few panels at the TCA’s, the Television Critics Association’s never-ending trolley of gift bags, unhealthy food and forced awkward panels discussing the new and old shows coming this fall: The Muppets!  Grey’s Anatomy! Tyra Banks’ Fab Life, a new talk show that is going to get us to embrace yellow as the in color and undoubtedly will change talk shows forever. 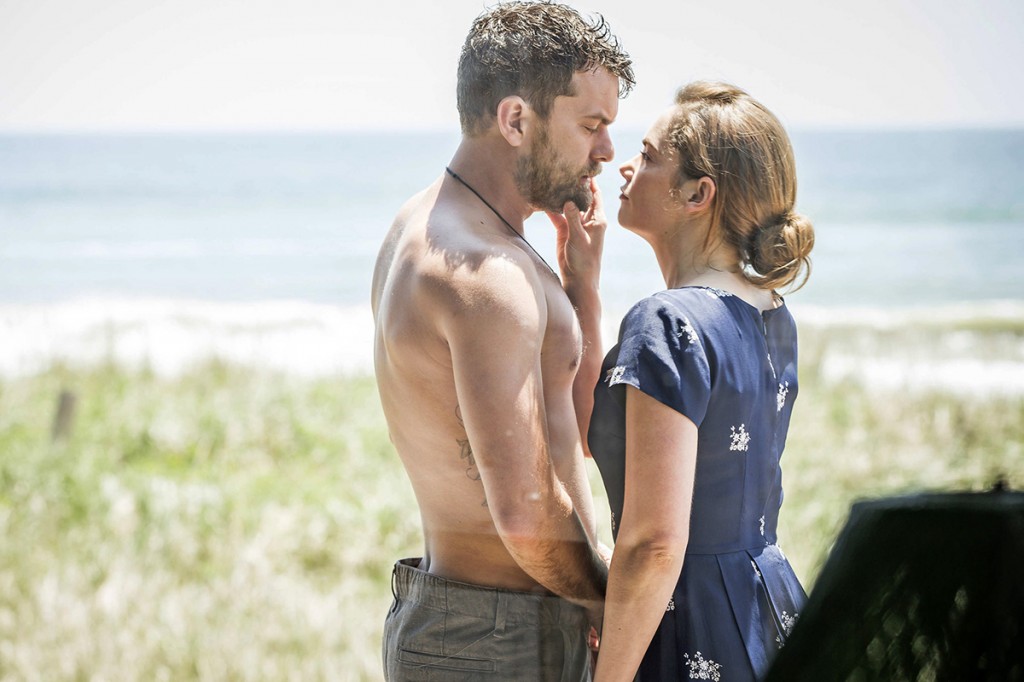 Instead, I met Pacey, the only dude in the circle of press surrounding star Joshua Jackson after he absolutely stole The Affair panel. That’s not easy to do when you’re sharing the stage with Dominic West, America’s sweetheart Maura Tierney and Golden Globe winning actress Ruth Wilson for the Golden Globe winning drama from creator Sarah Treem, but Jackson was clearly at his most comfortable answering the questions of the story hungry press. It’s as if he’s been doing it for more than twenty years (get ready to feel old: The Mighty Ducks came out in 1992).

I may have watched The Affair anyways, but I certainly made it a priority last year because it starred Jackson as Cole, a dark and mysterious rancher embroiled in this sorrowful saga of adultery. The Affair is painful, gripping and tedious. Its whole premise is in the margin of anachronisms, so perhaps it’s not surprising that it somehow makes a trip to the Hamptons for some good old-fashioned wife betraying seem new, thanks to the multiple perspective conceit of the show. We see the same dreadful vacation unfold from the eyes of the two lovers, Noah (West) and Alison (Wilson). Jackson’s character, Cole, is Alison’s husband, and one of many casualties in Noah and Alison’s courtship. But it’s clear he’s been broken and incapable of connecting with Alison since the loss of their son. Nothing we see of Cole from either POV is flattering: he’s a liar, maybe a criminal, possibly a rapist, and certainly angry, jealous and screwed up well before Noah’s family visits the Hamptons. But this comes from the lens of Noah and Alison. Who is Cole, really?

What makes season 2 of The Affair so exciting is that in addition to Noah and Alison’s POV’s this year, we get to see the story from Helen (Tierney, ever the unsung hero) and Cole’s perspectives. That means more Josh Jackson. 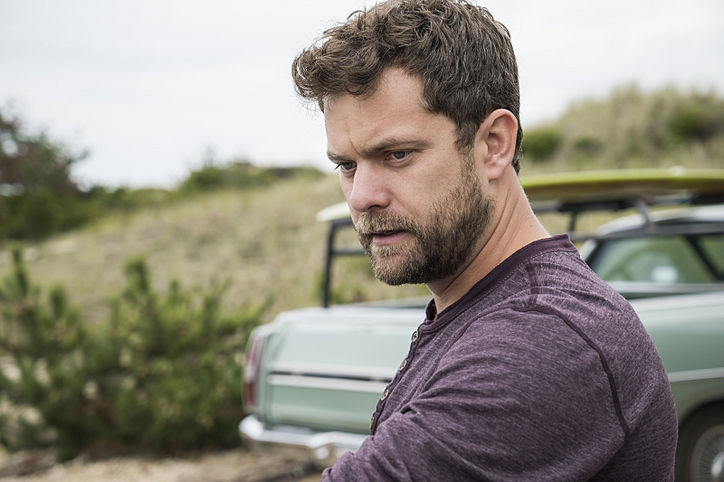 After talking with him at the TCA’s about the difficulties of The Affair and its premise, his parent’s divorce and his growing role on the show, that’s clearly a good thing. Then again, I’m not exactly an unbiased narrator.

“We all want to follow our narrator, our hero, right? It is really really unusual for a television show, a play, a film, it doesn’t matter, for any piece of entertainment, to not present you with that truth so that you can attach yourself to that story and feel good, or bad or whatever you’re supposed to feel as you go along with it. But that is the central purpose of our show,” Jackson said.

This conceit seemed to ruffle many critics and audience members, unused to the format. But to Jackson, that’s the whole point.

“We all laugh about it, because everybody’s who been in a relationship has had that moment. ‘Honey, that’s not what happened.’ I said this, no you said that, you know? The essential truth of the show is the idea that you’re only living your own story. You can share it as much as possible, but ultimately we’re all individuals stuck inside of our own perspective. That to me is real. Everybody has dealt with that. I understand the discomfort of not having an objective narrator, the god’s eye view or the single specific character you’re following that is the truth of the show…but to me, there’s nothing about the format of mis-recollection that is all that far out there. Because we all live that, in ways large and small. I can tell you, in my household, it comes up all the time.”

It also rings true with his upbringing, being the child of what he describes as an ugly divorce.

These fractured stories of the same event, and Jackson’s own viewpoint is what sold him on the show in the first place.

“I caught myself having a biased moment. There’s a lot of gender politics that go into the reason why Noah’s perspective is first. We have a tendency, sorry ladies, to find men more credible than women. [creator] Sarah’s not dumb, she knows that, so she was playing against our own biases, to put the man first. Okay that must be the truth, and now we show the woman second. Certainly for me, she got me immediately. The first scene where there was a divergence between the two stories, my instinctual reaction was, ‘Why is she lying about this?’ And I think that’s brilliant. That’s what got me hooked.”

It also makes the actors a little crazy. 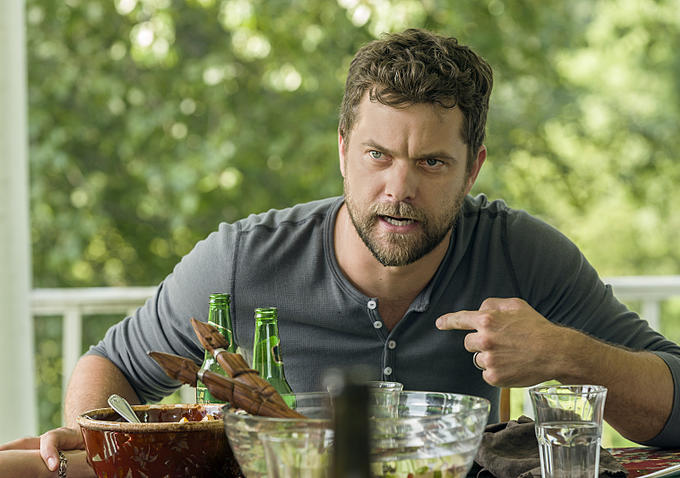 “Because we get into these logic loops, and honestly we spend an inordinate amount of time on set, being like, ‘Okay, so we’ve been together for 16 years, we lost a child. But you just had this horrible thing with my mother, so you’d be kind of pissed off at me. And I would be coming from the place that I was, so you would remember that I was in that place, but my mother’s thing would have definitely informed how you were feeling in this moment, so maybe we’d see this…’ It’s unending.”

So is the show’s dreary atmosphere. One thing that stands out in The Affair’s promos is how haggard Cole looks.

“He’s gone through an obviously pretty bad time. But I loved being able to, finally, this guy who’s been brood-ish and emotionally distant, certainly from Noah’s side, and even on Allison’s side frankly, the place that they are in their relationship, she’s not really seeing a whole or emotionally capable man there. And to see that guy who is the broad shouldered guy who takes care of stuff with confidence, to see him in a place in his life where he’s just undone and how he sees himself: like a failure, and as this sort of useless human. He has no purpose; he has no meaning for being. We find him in 2, and suddenly we see this guy who is riddled with insecurities in a way that I don’t think we ever saw in the first season.”

Clearly, The Affair is going to be another barrel of laughs when it picks things back up. 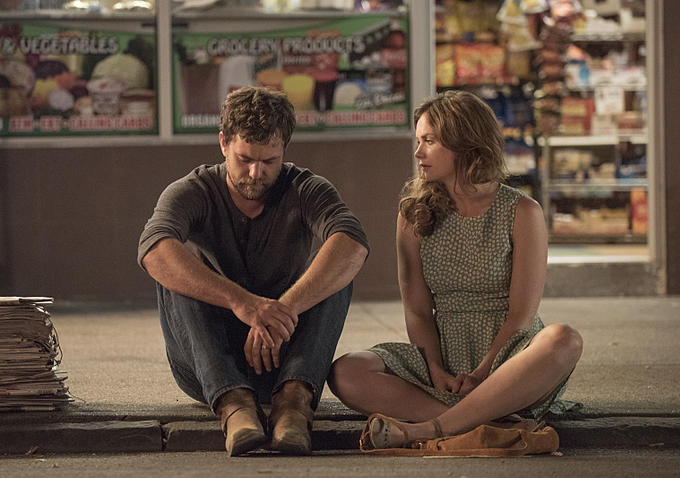 “There’s a weakness to him. You saw a little bit of the break at the end of last year, in the finale; that was a totally different guy than we had seen before. But you’d never really seen him honestly just be ruined. He’s the type of character: ‘I’m going to do this and I’m going to do that. This is the right way. This is how we take care of things and this is how we keep up appearances in the town,’ and I think in season 2 it’s interesting to see inside that guy’s life and how he feels totally eaten up by insecurity, fear and doubt in a way that we never saw in the first season. He’s in a bad place this season.”

Is anyone really happy in the Hamptons? Thankfully, at the end of episode 2, there’s a scene between Cole and Alison that changes the direction of his character.

“I think it’s the first moment where he allows himself to sort of step back into being alive. So what happens? Everything in your life has been wiped out. Your family’s gone, your wife is gone, your child is gone. Your sense of self is completely annihilated. So he has to start figuring out who he is, what it means to be a man. Who is Cole going to be post-all of that? And in a way that I find is very true, it’s certainly been true in my life, a woman is the best way to do that. He meets this woman, and without all of the baggage of his entire life, he can start entering into a relationship with somebody that’s about his current self as opposed to everything that has come up. She’s what brings him back into the world.”

The Affair is what has brought Joshua Jackson back onto our TVs, and come Sunday October 4 at 10 PM (or now with the above video), we’ll get to see a lot more of Pacey in the award-winning drama.