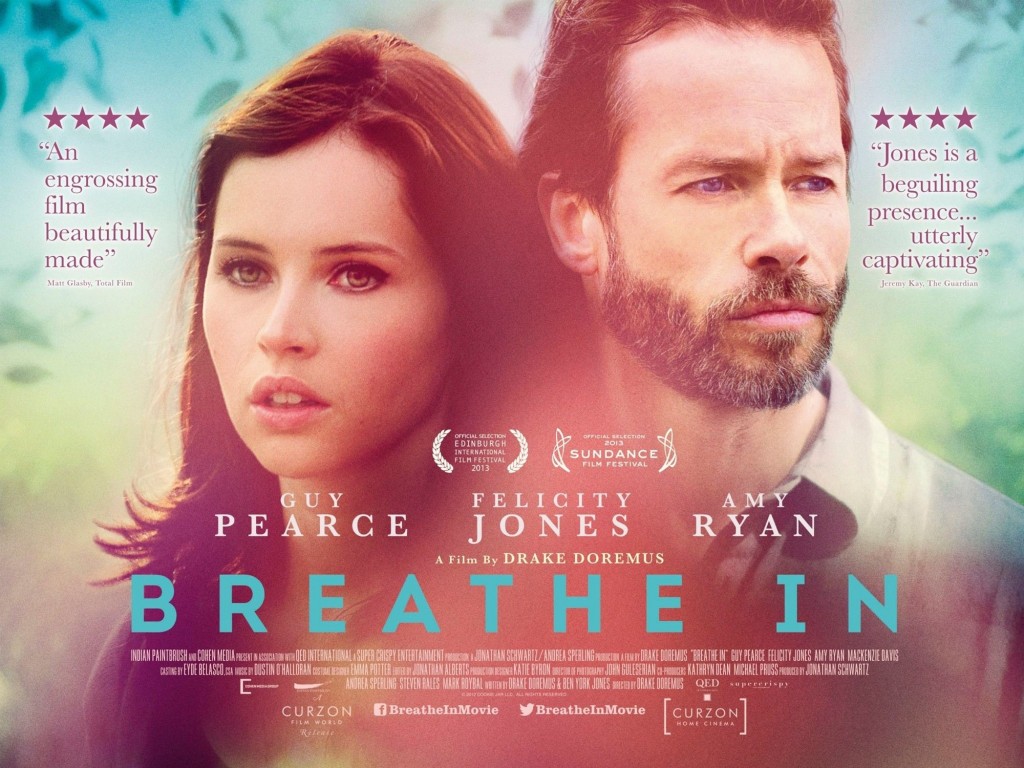 The Reynolds family, on the surface, appears to be happy, strong, and loving. Keith (IRON MAN 3’s Guy Pearce) and Megan (GONE BABY GONE’s Amy Ryan) are happily married, and have a champion swimmer daughter Lauren (THAT AWKWARD MOMENT’s Mackenzie Davis). But, appearances are deceiving, one of the motifs bursting at the seems of Drake Doremus’ BREATHE IN.

As the family smiles and laugh for a photo shoot in the back yard of their wonderful upstate NY home, and play Jenga together, it seems like the Reynolds family has it all figured out. But, it’s just a lie that they tell each other. Keith doesn’t want to be a high school music teacher any more. He wants to play music and move back to the city, to embrace the creative life he had to give up when Lauren was born. Megan is “happy” driving everyone around and collecting cookie jars. Lauren is your average high school senior, confident yet completely unsure of herself and the future; she just wants a car.

That the Reynolds family is playing Jenga is no accident. While that seems to indicate a loving family life (how many families play board games when their daughter is a senior in high school?), Jenga is a game of taking risks, imbalance and living on the edge. The Reynolds family is on the precipice…their seemingly idyllic suburban life is precarious (and so is all of ours). The Reynolds family foundation, seemingly sturdy, isn’t exactly built on the stable bedrock an outsider might believe.

It’s clear that Keith and Megan haven’t been happy for awhile, but you get the feeling that these conflicts might never have reared their ugly heads if it weren’t for Sophie (Felicity Jones), an alluring 18 year old British exchange student arriving to spend a semester at school in New York…and inexorably ruin the Reynolds lives. 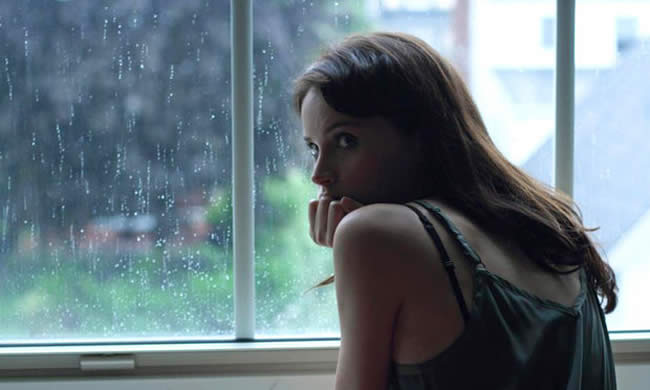 Felicity Jones, as always, is a revelation. Oscars and fanfare (she’s Felicia Hardy in the upcoming AMAZING SPIDER-MAN 2) are in her future, though you get the sense that’s not what she wants. She plays Sophie as mysterious, gorgeous, quiet, aloof…understated yet sexy…dangerous. Innocent, but guilty. A villain who doesn’t know that that’s her role. A victim of circumstance. Naive.

Things immediately change when Sophie is ushered into the Reynolds family home. Keith snoops in Sophie’s bag. Sophie snoops at Lauren’s camera. Lauren pretends like she’s cool sharing her room, but she’s more fragile than all of them. Megan hand-crafted a wonderful guide to their town for Sophie, oblivious to everything.

Keith is preparing for an audition to get a chair on a prestigious symphony, hoping to quit teaching if he gets the job, an absolute “no” proposition in his wife’s mind. Clearly, Sophie is intrigued by Keith’s music…and from the moment the two share eye contact, or more often than not, avoid each other’s gaze, you know something uncomfortable is going to happen.

At school, Lauren introduces Sophie, a hot, “exotic” British chick, to her guy friends, including her “not boyfriend” Aaron (Matthew Daddario). You know where this is going.

TWIN PEAKS’ Kyle MacLachlan even shows up as a creepy family friend, providing seedy commentary about Sophie’s attributes while flipping burgers. Again, sirens are practically going off in your head in every single scene. 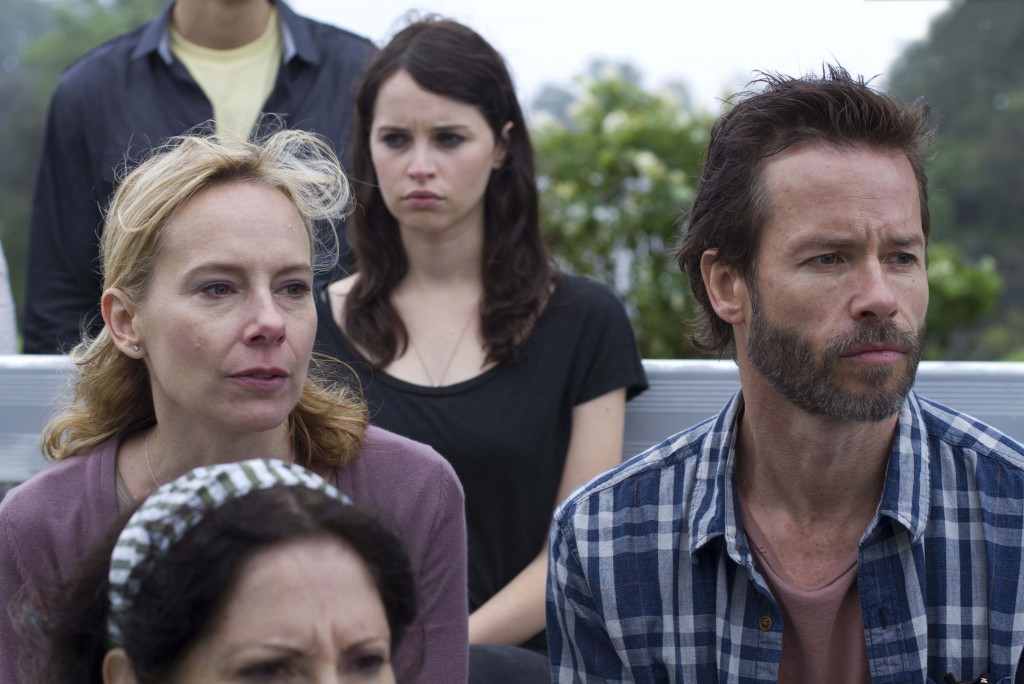 Aaron, of course, proves to be a creep. Sophie opens Keith’s eyes and reawakens his creative side. Megan and Lauren are practically collateral damage, their seemingly happy and content lives doomed from the start. It’s all inevitable, and BREATHE IN oozes tension from the very first frame. Even when the Reynolds “appear” to be happy, you’re holding in your breathe.

Watching something with your hands over your eyes has become a cliche way to describe an unbearable viewing experience, but I don’t think anyone actually does that. Well, I actually did just that during BREATHE IN’s most painful moments…as I couldn’t watch…yet couldn’t not watch the train wreck that was unfolding.

BREATHE IN isn’t a surprising tale, as you can predict everything set in motion the moment Sophie arrives at the airport. The wizardry comes in the stirringly real performances, and from writer-director Drake Doremus (who also crafted the fabulous and heartrending LIKE CRAZY), who managed to beautifully and authentically capture this catastrophe. For much of the proceedings, the film is shot in grays and blues, understated and almost grainy, until it opens up in the denouement.

BREATHE IN is constantly toeing the line of being TOO uncomfortable, or too awful, because there’s nothing worse than just tearing a family apart…but you realize the Reynolds and their foibles were bound to face their reckoning at some point. Sophie just accelerated the process, blowing up their lives in stunningly quick and efficient fashion.

BREATHE IN isn’t an easy movie to watch, but it’s certainly a worthwhile one. 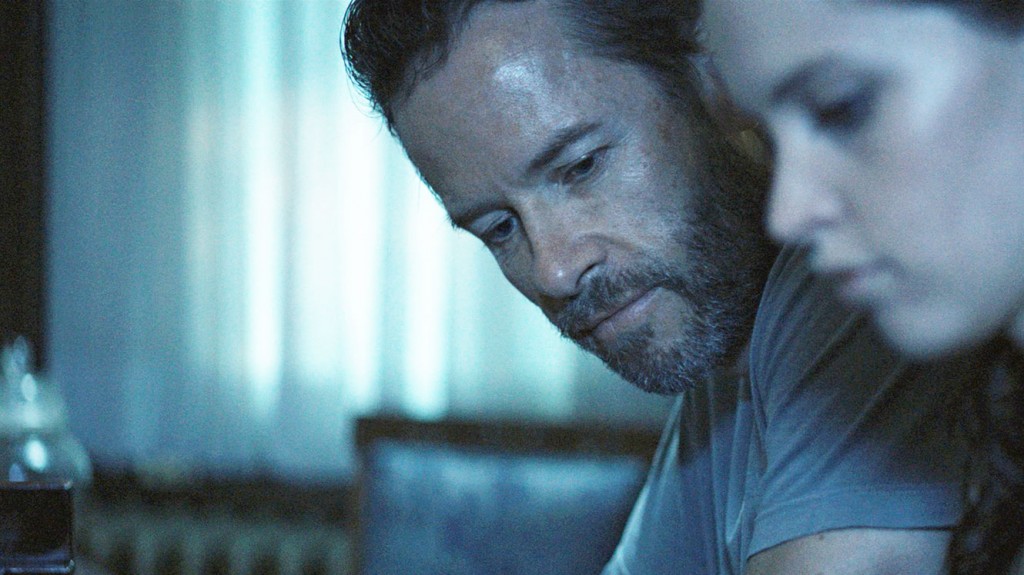