An Introduction To Batman: The Animated Series

I am vengeance. I am the night. I am a comprehensive look at Batman: The Animated Series. 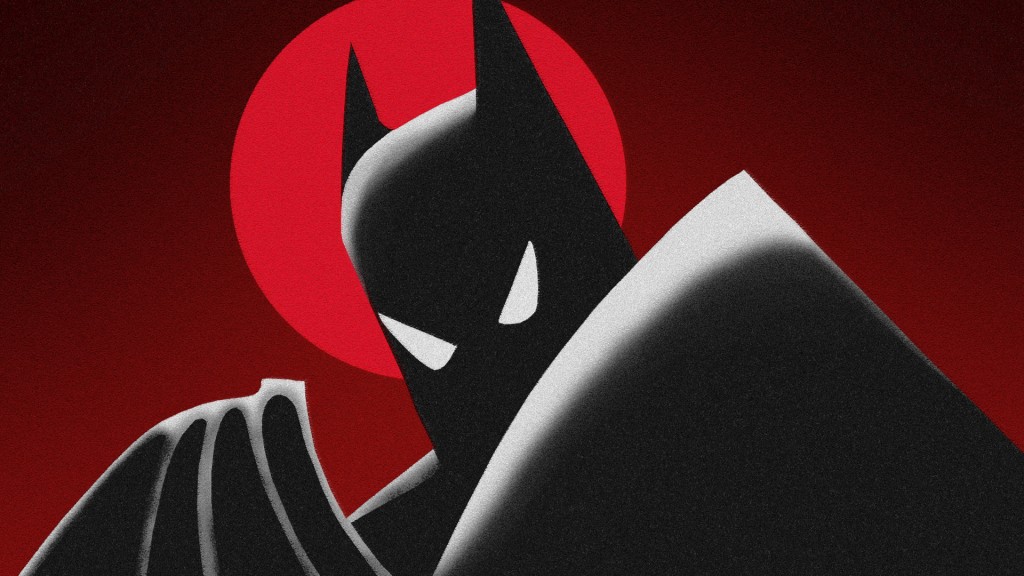 “Well, let’s just say that I’m a civic-minded citizen with a lot of time on my hands.” — The Clock King, Episode 14.

Hello and welcome to the first installment of a new ongoing series where I, Ryan, plan to focus my ample free time on examining every episode of the iconic 1990s animated interpretation of the Dark Knight.

But before we can jump cowl-first into this beloved series, we need to do a little scene setting.

First, the ‘90s was the greatest decade ever for cartoons, and it’s hard to imagine someone arguing against that (consider yourself challenged, Internet). Some of my personal favorites are/were: X-Men, Spider-Man, Chip ‘n’ Dale Rescue Rangers, Doug, Darkwing Duck, Tailspin, Pinky and the Brain, Animaniacs, Rugrats, and the list goes on.

Long story short: It was a tough decade in which to stand out on the small screen.

Secondly, a major factor playing into this show’s success was that it came on the heels of an unquestionably monumental stretch of time for the Bat-verse on the page and on the screen. The mid-to-late ‘80s and early ‘90s saw a substantial shift for the character where Alan Moore (The Killing Joke) and Frank Miller (Year One, The Dark Knight Returns) ushered in the era of the gritty, dark interpretation of the Bat, sparking a resurgence in the popularity and cultural relevancy of the character. 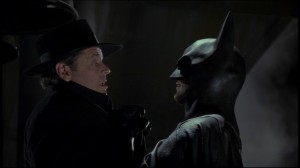 Jack Napier: Enraging Batman purists for a quarter of a century.

All of these factors created plenty of stiff competition and set the bar high, but optimists at Warner Bros. Animation saw the platform it presented.

The WB brought together the art/production duo of Bruce Timm and the all-too-often forgotten Eric Radomski, a badass corps of writers, musical wizard Danny Elfman, and perhaps the best cast of voice actors ever assembled (*bias alert*) to join forces in taking us on an after-school journey into a noir crime drama that we will never forget.

I still remember the way that intro made me feel as a kid, and I’ll spend an entire post breaking it down frame-by-frame at some point, but in the interest of soon-to-be-abandoned conciseness, I’ll move along for now.

One of the things that really jumps out is the artistic style; it really is something to behold and admire.

With a heavy reliance on blacks, greys and reds, the dreary color palette creates a menacing atmosphere that effortlessly conveys the twisted, inherent hopelessness of Gotham.

In fact, this was the first cartoon ever drawn/painted on black paper. True story! 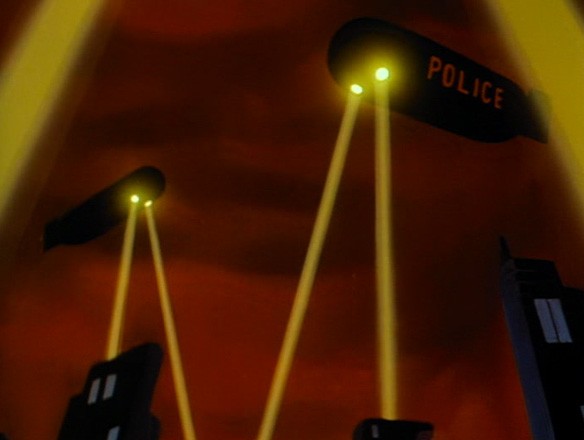 The GCPD may be outgunned and facing corruption at every level, but at least it has blimps!

But the atramentous world isn’t the only thing that stands out; it’s the style of the buildings, cars and people that inhabit it.

The artistic team referred to its creation as “dark deco,” paying homage to the art deco movement of the 1920s and ‘30s. That unique look really took this show to a different level.

It’s hard to put a time frame on this series as, in many ways, it does feel like it takes place in a Dick-Tracy, gangster-era Chicago or New York, but for every paper boy in a flat cap or Tommy Gun-toting mobster, there is also a high-tech Batcomputer or an elaborate machine that induces dreams. And this confusing timeline was purposeful. 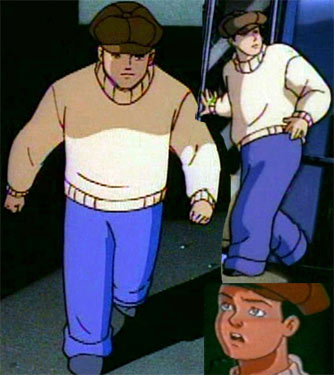 Radomski and Timm were inspired by what the former referred to as an “otherwordly timelessness” seen in Burton’s film, where vintage clothing, antique cars and police blimps portrayed a Gotham that resembled a grungy Roaring Twenties-era metropolis, while at the same time littering it with modern amenities and various technological advancements. 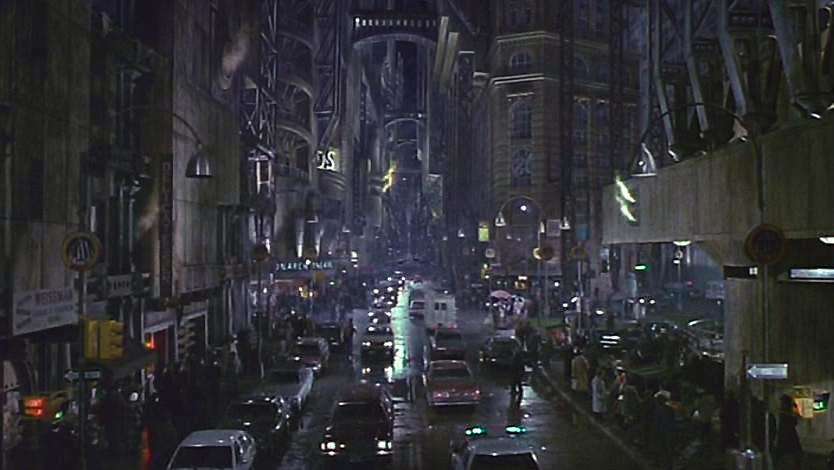 And taking another note from the ’89 film, the city itself is exaggerated, massive and ominous in a way that transforms it into a character more than a setting; an animated version of Burton’s hell on earth. This effectively puts Batman in a setting that not-so-subtly imparts on the viewer a measure of the evil that resides within; one of the many layers that gives this show its staying power. 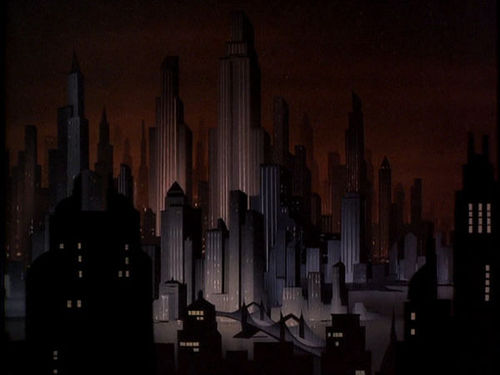 Gotham City as it was meant to be.

It really is a time and place all its own. And that cannot be understated in its importance in the long-term success of BTAS (that’s the acronym we’re going to roll with, FYI).

Truth be told, I could ramble on for another thousand words about the art, so we’ll just pick this time to move along to something I know nothing about: music!

Don’t get me wrong, I love listening to music, but I don’t know a damn thing about it and have zero natural ability with it in any capacity. And on the opposite end of that spectrum, we have Danny Elfman.

Mr. Elfman did what any self-respecting person did in the pre-Internet age and put his God-given ability to use, blessing my ringtone gallery and the world at large with two of the most iconic superhero theme songs ever produced with his work on BATMAN ’89 and Batman: TAS.

He also did the theme music for Spider-Man 3, but if you’re anything like me you’ve spent the past seven years pretending that movie never happened.

But back to the point at hand, Elfman really rubs in his musical talents having composed the music and/or theme for the following: Pee-wee’s Big Adventure, The Flash, Beetlejuice, Army of Darkness, The Nightmare Before Christmas, Tales from the Crypt, Corpse Bride, Chicago, Desperate Housewives and most famously of all — The Simpsons.

He’s a machine and his jam-packed schedule probably played some role in him turning down the initial job offer to compose the theme for BTAS,  but he eventually hopped on board and wrote a variation of his hit BATMAN ’89 theme for the show.

Listen and compare below.

While undeniably similar, the BTAS theme is different enough to stand on its own, and it absolutely captures the mood of the show and how it deviates from the film. And that’s not even taking into consideration the masterful in-show music he provided, which I’ll touch on in the next installment.

Speaking of delayed gratification, the voice acting is something I’ll tackle more thoroughly on an episode-by-episode basis as characters are introduced, but if you are unfamiliar with the glorious performances this show was graced with, here is a handy video I stumbled upon that will provide an overview of what is to come.

Most people know and revere Kevin Conroy’s Batman and Mark Hamill’s Joker (both of which are still the voices I hear in my head when I read Batman comics) and those are deservedly lauded, but they tend to overshadow other worthy performances, most notably Arleen Sorkin’s Harley Quinn.

Not only was Sorkin the first to voice Mr. J’s  uber popular sidekick, she literally provided the inspiration for the creation of the character by Paul Dini in 1992.

You can see (or hear, rather) the makings of Miss Quinn in this clip from Sorkin’s “Days of Our Lives” stint:

In addition to the previously mentioned trio, Efrim Zimbalist Jr. (Alfred), Bob Hastings (Commissioner Gordon), David Warner (Ra’s al Ghul) and Richard Moll (Harvey Dent) were just a few of the other standout performers that instilled this show with the believability, charm and emotion that helped bring the unique art and the intelligent, thoughtful writing to life.

All these factors combined continue to give Batman: The Animated Series a lasting allure and relevance more than 20 years later and warrant it wholly deserving of this labor of love I am embarking upon.

On behalf of Batman and myself, we’d love to have you along for the ride.