Only eight witches and wizards remain in this crazed March Madness-style tournament of HARRY POTTER characters. Allow me to illuminate the bracket for you. LUMOS! 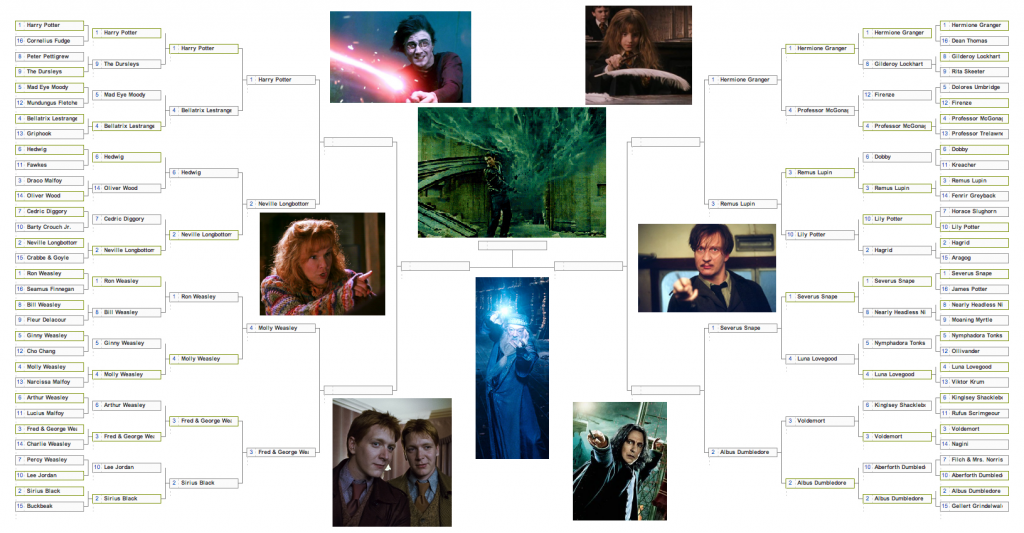 None of the survivors are Ron Weasley. If there was one person I’m fine with one of the all-time greats losing to, it’s his dear ole mum, the patron saint of parenthood/awesome, and the den mother of the Burrow/all of us, Molly Weasley.

Whimsy and quirk were defeated once and for all, as Luna Lovegood was no match for the Half-Blood Prince, one Severus Snape, and I have no quibble(r)s about it.

Harry’s father figures are like squibs: we don’t want any part of that shit, as Sirius Black succumbed to the veil once again.

Death Eaters have also been eradicated, as He-Who-Must-Not-Be-Named and Bellatrix Lestrange have been Avada Kedavra’d from the proceedings.

Its humans only, as Hedwig has taken his final flight.

Harry Potter and Neville Longbottom, as has been fated, will face off for a spot in the Final Four. But will it even matter, with Snape, Lupin, Hermione or Dumbledore emerging on the other side, and the King or Queen of Weasley’s standing in their way to the Championship?

We’ve arrived to the Elite 8, when decisions are more painful than splinching, or as exhausting as Hermione’s class schedule sans a time turner. Was Harry truly the right Chosen One? Can the Weasley twin wheeze past their mother? Can Hermione dispatch our favorite Professor/werewolf, Remus Lupin? Can Snape outwit his second and truest master, Albus Dumbledore? Time to find out.

Voting lasts through the weekend, until April 27th at 11:59 PM PT. Feel free to vote as often as you’d like, and tell your friends (muggle or otherwise) via owl or floo powder, unless you want to receive a howler when they find out you were sipping on Madam Rosmerta’s Butterbeers without them.