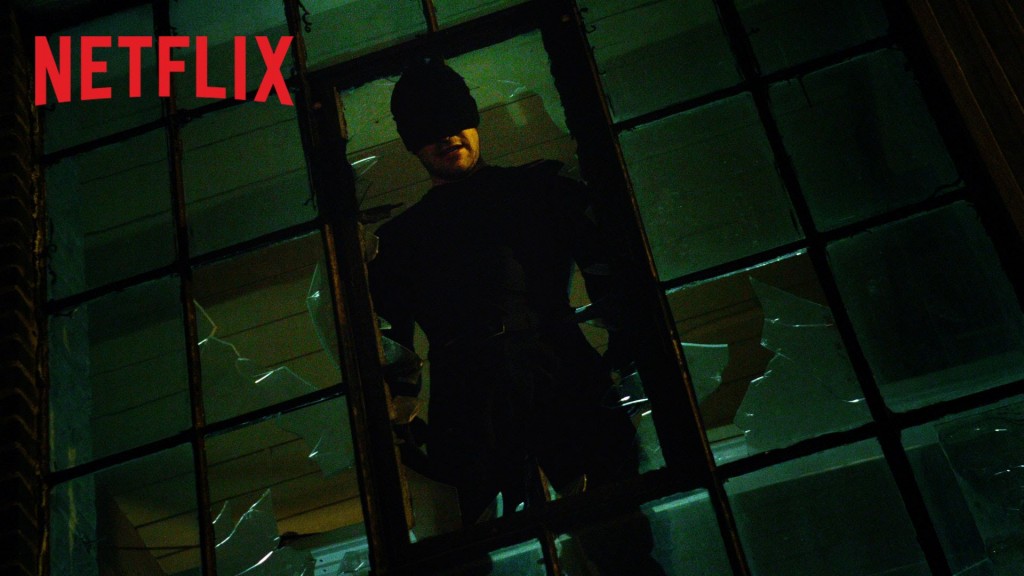 “Rabbit in a Snowstorm”

What’s stunning about Daredevil is how fully realized this world is, and how unabashedly dark and violent it is. I was expecting a hard PG-13, or maybe a soft R, perhaps. It’s certainly more than that.

An off-kilter man walks into a bowling alley, and it’s not the start of a joke, but some insanity. The alley’s almost closed, so he can’t play, but John Healy (Alex Morf) wants to play with Mr. Prohashka, who has a deal with the business to bowl whenever he wants. Alone. Healy doesn’t take the rejection well, kicking the crap out of his guards and then amping up the violence to a level we had only hinted at, breaking Prohashka’s arm in the circular bowling queue thingy (the technical term). We see some bone and normally that’s when you’d expect the show to pump the brakes…instead Healy uses a bowling ball to bash the man’s face in. You don’t see it, but still: holy Hell(‘s kitchen).

It’s a compelling opening, but it’s intercut with a smash cut flashback to 36 hours earlier, where Turk Barrett (a great and to this point under-utilized Rob Morgan) gives Healy a gun and promises it won’t jam. It does, which leads to bowling ball as blunt force trauma. It’s never followed up on, but I suppose it’s not necessary to: Turk needed to ensure Healy would be caught, and a gun would’ve been a lot quicker. Instead, Turk is forced to ask for a lawyer when the cops arrive. Guess who those lawyers are gonna be?

Before that however, we get another brief interlude between Matt and the Priest from the pilot, who offers him a latte before work. Matt denies it, teasing out this relationship longer and more vaguely than we probably need it to be.

Then we cut to the world’s last honest newsman Ben Urich (a fucking brilliantly cast Vondie Curtis-Hall), meeting with an Italian mobster, overlooking the city. The man intimates there’s a new player in town, and that the old guard is changing. Riggeletto retired…in pieces, and this guy’s heading to Florida before he meets the same fate. While he owes Urich a favor and clearly respects him, his advice is to “take a pass.” There are “no rules, not anymore,” and he might as well be talking about the Netflix corner of the MCU. “Some fights just get you bloody,” he says, because even after the last of the Jack Murdock boxing flashbacks, we’re never escaping that motif.

At our favorite law firm, Karen reveals to Foggy that after a day of free work…she’d like some money. Matt comes in, bruised and beat up, and he explains it away with his blindness. “You need a dog,” Foggy suggests, and for a moment, I imagined Daredevil having a puppy sidekick, DOUBLE DOG DARE-DEVIL. After almost dying in bliss, the slimy Wesley (breakout performer Toby Leonard Moore) waltzes in, wanting to put Nelson and Murdock on retainer for his employer. He of course refuses to share any information about him, but offers a boat load of cash to do so. Matt not enthused, but he didn’t see the number of zeroes on the check (he can’t see guys). Then Wesley has the audacity to ask if all their clients get to work for the company or just the pretty ones. Karen’s freaked, everybody’s freaked, since he shouldn’t know that.

Foggy agrees to meet their new client Healy anyways, but he gives Foggy the creeps enough to walk away. But, of course, ever the contrarian, Matt forces them to take the case. Foggy gets no say in the business, after all.

Urich’s not listening to the nearly departed mobster: he’s excited about the new story, exposing a new player in Hell’s Kitchen. But his editor doesn’t give a shit. They need a story that will sell papers, and apparently that means fluff pieces on what color the new subway line should be. I feel like, if anyone was going to read a newspaper, they’d be enticed by a crazy crime conspiracy. But nope. Urich also receives a dig; he’s a dying breed, making half what most are on blogs, who are working in their underwear. For the record: I’m wearing pants and unless Urich is an intern, the finances are off too.

But I love this gritty 70’s crime vibe, and the moment Urich arrives, he adds not only another angle, but more urgency. His subplots bristle with intensity and feel like Marvel’s The Wire in the best way. Plus, he garners so much affection in about one frame; he visits the hospital and is able to finagle an extension for his sick wife’s stay. He’s such a paragon of virtue that he doesn’t even dangle the cheese blintz before negotiations. He gives it to the head of the hospital after. If there’s a higher moral standard, humanity hasn’t discovered it.

It took three episodes, but Daredevil finally refers to New York/Hell’s Kitchen as “my city.” A lot of milestones are met in this third episode: it’s of course the first appearance of Ben Urich, and our first glimpse of courtroom drama. And I like what I see. The case never bogs down the narrative, and the episode is never about the case (it’s more about the jury and Matt sensing that someone has been blackmailed), and I was hanging on every word of Murdock’s closing statement, even if it was a statement on good and evil. What isn’t?

Karen, meanwhile, is offered a non-disclosure agreement and a lump sum of 6 months salary. Considering she was a secretary, that can’t be that much money. She pays a visit to Daniel Fisher’s wife (the wife of the man who died in her apartment), who’s unsurprisingly not enthused to see her. She’s packing things up to get the hell out, which is the sensible decision for Italian mobsters and widows alike. She’s already signed her agreement, and suggests Page to do the same. “Let it go,” she says. Twice, and damn/love you Frozen for changing those three words forever. In fact, I don’t think you can ever use those words without invoking that song.

So far, all of these characters are operating exactly how you want them to operate, and how you expect them to operate. That means Karen pays Ben Urich a visit, offering up her story to a man that took down the Italian mob when she was in diapers.

After the jury is hung, Healy gets out. So Murdock’s alter ego gets to take him to task. It’s another thrilling fight, and FINALLY, we get the name. The name of the man he works for, the all important mysterious employer: Wilson Fisk. Sure, we knew the man who will be the Kingpin was behind it from the start, but the he-who-must-not-be-named gimmick slow play was a stroke of brilliance. Like in a horror movie, you’re often scared by what you don’t see.

The moment is made even better and more bonkers, when Healy, realizing that he’s doomed himself and everyone else he’s ever cared about, impales his forehead on a spike. It’s #@$ed up.

This leads directly to the episode’s final milestone: our first glimpse of Wilson Fisk himself. We see the back of the imposing Vincent D’Onofrio, leering at a painting in a swanky gallery, a gradients of white painting called “Rabbit in a snowstorm,” named after a children’s joke. “It makes me feel alone,” Wilson mumbles, drolly to the gallery owner Vanessa Marianna (Man of Steel‘s Ayelet Zurer). Comic fans will know exactly who Vanessa is, or will be.