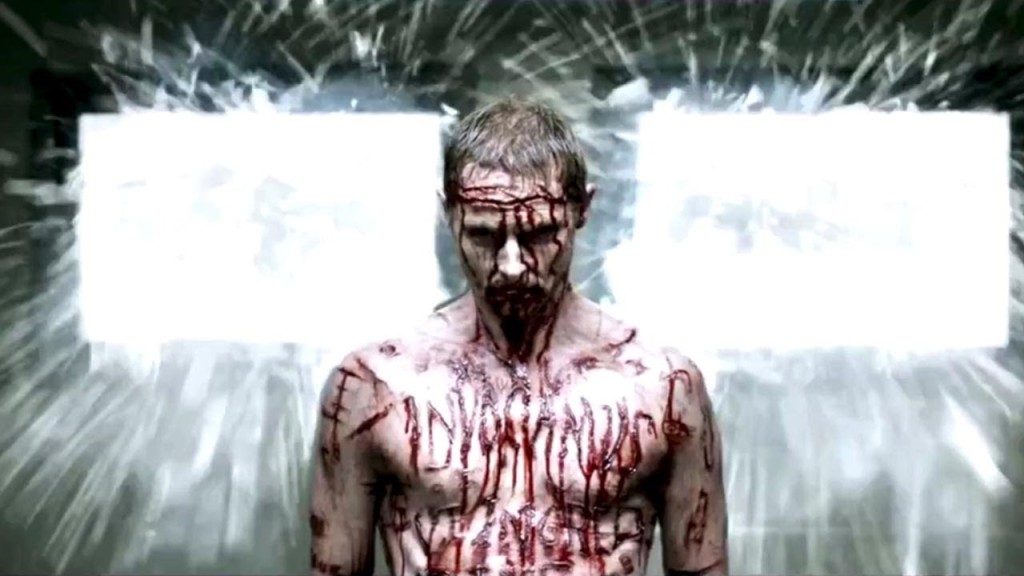 Chris Hardwick is the moderator for Deliver Us From Evil, which makes me so erect for Comic-Con, and honestly, automatically makes this panel a must-watch. He’s the best moderator in the business.

Director Scott Derrickson (Sinister, Exorcism of Emily Rose) is brought to the stage. We quickly learn that Scott and Olivia Munn did a beer chugging challenge backstage…and Scott won. This happened 30 seconds ago. Dayum, I’m so jealous.

Then we get to see a clip, which is essentially a 5 and a half minute trailer, with material that mostly has not been shown anywhere. Scott says it’s a good representation of the movie. The film is based on the life of Ralph Sarchie, an undercover police sergeant who worked in the most dangerous square mile in America, and then became embroiled in the supernatural. The book upon which the film is based can be found here.

The clip is very Sinister and Blumhouse Productions-y. The highlight is definitely a horrifying owl stuffed animal that moves of its own accord (above). Because owls are terrifying/awesome. Afterwards, we’re introduced to the guests, and boy, this panel has some of the best guests of any all weekend. First there’s super producer Jerry Bruckheimer (okay whatever), THEN Joel McHale, Olivia Munn, Edgar Ramirez and Eric Bana. YES. All of the Yesses.

The panel immediately gets off on the right/wrong foot, when a guy yells that he loves Olivia Munn, to which she quickly responds: “I don’t know you.” Hardwick mentions that she could totally hook up with that guy. Munn says she’s down, but asks: “How big is it?” Then she asks how big Chris Hardwick’s dick is. This panel is gonna rule, because Olivia has just chugged a beer, and everyone is on comedic point. 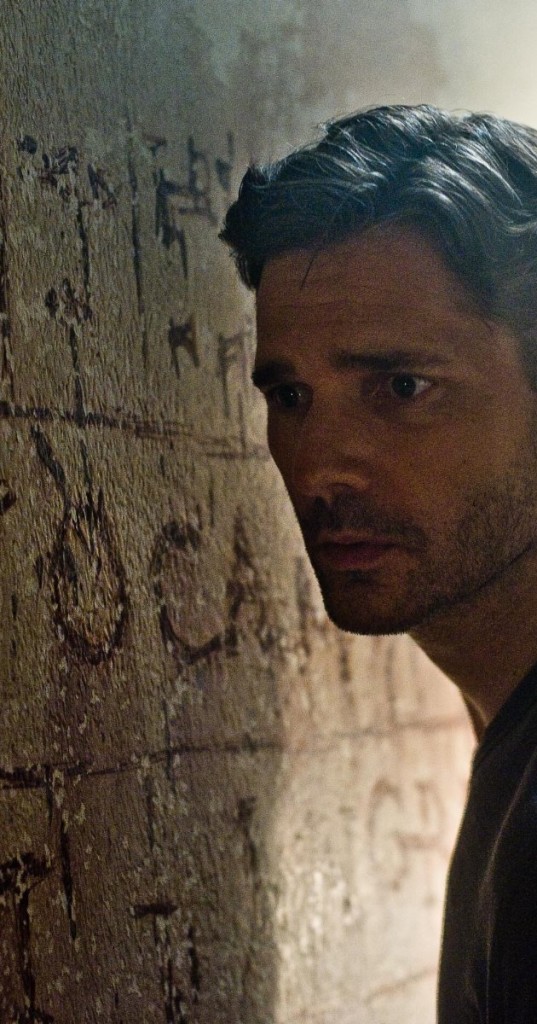 How did they get involved with the film?

Eric Bana was introduced to the film by the script, and he loved it, and wanted to play Ralph Sarchie, no matter what the genre.

Chris Hardwick is superstitious: “If I’m in a devil possession movie, I feel like I’ll be possessed by the devil.” Did that notion scare Eric Bana? Eric was a skeptic to start, which was handy while filming. Then Scott and Sarchie gave Eric some terrifying footage, that apparently scared him for weeks, which in turn, also helped shooting the movie.

Edgar Ramirez plays a priest who’s based on two real people. Edgar was raised Catholic, and familiar with the symbolism in the movie. He watched The Exorcist as an accident when he was six years old, and had to sleep with the lights on for the next two years. Now his lights are on again since they made Deliver Us From Evil. For him, it was like facing those fears from his childhood. 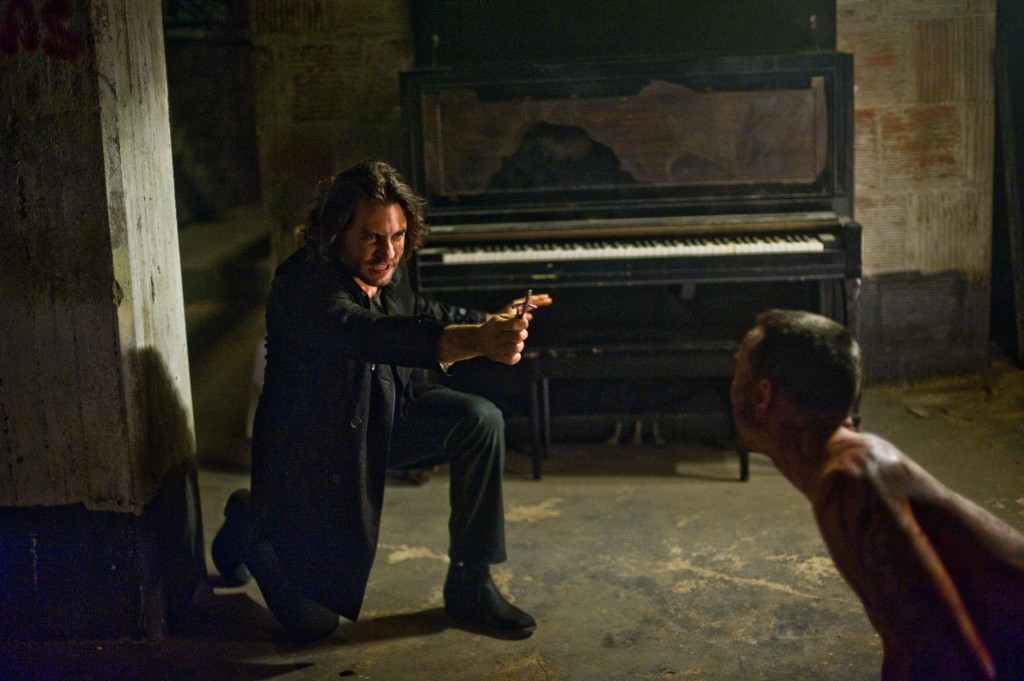 Hardwick loves the idea that if the lights are on, the devil will shy away…Like, oh no, it’s not worth it, a hilarious observation. The lights won’t stop the devil, children.

Why did Olivia Munn get involved, and what’s her character’s deal? Again, she’s ready for a joke (that might not be a joke): “The only reason I signed onto the movie” was to play Eric’s wife. She’s a “believer,” (not a trace, or doubt in my mind) but that wasn’t the important part of it to her. For Olivia, it was to create a nice and inviting home base to show what Sarchie has to lose.

Chris asks the panel if there are light moments between takes, or if they’re serious on set because it’s a horror flick. Olivia quickly responds that there are fluffy moments, as “we have a lot of comedic actors in this film, but not Joel.” To which Joel agreed resolutely/hilariously. Then Eric told Olivia that he saw this illustrious evil footage, and couldn’t sleep for three weeks. That put a damper on things. Eric didn’t want Olivia to see it, so she of course had to, and couldn’t get through it. She cried while watching it. Now WE ALL WANT TO SEE IT.

But apparently you can’t find footage online (“What do you mean it’s not on YouTube?”). Munn: “The internet will let you down, but Scott won’t.”

The conversation drifts to…Joel McHale and #sixseasonsandamovie. “I play Jeff Winger in this movie,” McHale jokes. His character is “very concerned about his uniform the entire time.” Amazing. We learn that Joel has been friends with Scott for a long time, and that he took pity on me, and wrote this role with “me in mind” (“pedophile”). Apparently Joel has a large knife collection, and so does his character in the movie. Olivia asks if that’s legit. “Yeah, come over.” Joel’s character, Butler, isn’t a nice man. It’ll be exciting to see different shades of Joel McHale on screen.

For the role, Joel learned a deadly version of Filipino knife fighting, which Joel McHale likens to a “type of murder.” Chris Hardwick and Joel McHale on a panel together…is the best.

The subject of playing a real person comes up. Eric spent a lot of time with Ralph Sarchie, though he didn’t have a choice. Sarchie was there from day 1, even around for the table reads, before Eric even had developed an accent. Ralph gave Eric a note the first day, and Eric told him not to pay any attention to him that night, and Sarchie took it in stride. From there, they became friends. There were some times when Sarchie wouldn’t come, because he didn’t want to see what they were filming that day (because his acting was so bad, Bana jokes). Eric had a thousand questions to ask Sarchie, but this time around, he shut his mouth and just listened to him, and saw other cops dealt with him. It was better to observe than pepper him with questions.

Edgar is also bringing a real person to life, though he didn’t have access to them, like Eric did. Edgar is always philosophical, so he said: “You can’t imitate life,” and their job is to recreate it.

Has Scott ever witnessed a real-life exorcism?
No, he’s seen a ton of footage and talked with people who have had experiences, but he’s never seen one in real life, and “I don’t particularly want to.”

Does Ralph Sarchie have a cameo in the movie?
Scott lobbied for it, but Sarchie absolutely refused. “Ralph’s a very complicated guy. There was something about it that seemed like it’d be ego driven. I think he wanted to do it” so because of that, Sarchie made sure that he didn’t. Ralph’s apparently doing really well with becoming a movie character. Scott is appreciative that he’s letting them do what they’ve done. Sarchie also helped make sure that the police were properly represented in the film, so he was on set for practical reasons. He did a great job of not getting in the way of the creative process.

Joel is asked if he’s trying to step more into films, and dramas. Comedy brought him access to the business, but he used to play different roles, and he’s “over the moon about the opportunity and thrilled by the character.” McHale calls it the best time he’s ever had acting. Scott was one of the first friends Joel made when he moved from Seattle to Hollywood, and now their families are friends.

Creepily enough, Scott Derrickson knows a test question designed by the FBI to identify serial killers, and Scott has asked 45 different people…and Joel is the only person to answer it correctly. Eerie.

This blew my mind: Eric Bana was known in Australia for his comic chops, working as a stand up comedian and hosting his own sketch show. Eric doesn’t miss stand up (he’s too lazy nowadays), but misses sketch comedy, because that part of your brain never goes away, even if it’s been over a dozen years ago since he did it. Get this guy on SNL and Funnyordie. Scott reveals that he has a 7-8 minute improv reel of Eric and Joel driving in a car…and this NEEDS TO EXIST AND BE ONLINE RIGHT THIS MOMENT. It’ll be in the damn trending spot on FB in minutes.

Will Joel do a spoof of Deliver Us From Evil on The Soup? It’d be up to the cast, he responds, to which Olivia Munn immediately states: “I’m busy.” And that’s that, even if it was a joke.

Do they ever get stressed working together? “I am delightful,” Olivia Munn says. And we all believe her. Apparently they all get along, and sometimes that isn’t the case on a movie set, which is the least surprising nugget of information I “uncovered” this week. They managed to rise above the grueling weather and conditions, thanks to their chemistry.

Hardwick asks Bruckheimer a question, because he might fall asleep: How do you know when you have right mix? “You don’t, and I’ve been doing it for forty years.” Thanks Jerry.

How did the crazy/scary footage change their beliefs, if any?
Eric doesn’t care where it comes from, but he witnessed people going through real suffering, and that’s what scared and moved him. Olivia was raised Christian, but something in 2010 caused her not to believe anymore. After she saw the videos, this made her have questions, and she visited a Long Island medium. Now she’s a believer, after seeing this different kind of otherworldly suffering.

How much of the movie uses practical FX as opposed to CGI?
Scott tries to make it real whenever possible, because if it’s real, it’ll look better. No $#*@. It’s not a heavy CG movie, and relies more on the story and characters, which is nice, but also what every director should say. Scott says that British actor Sean Harris was the conduit for the movie, like Jennifer Carpenter in Emily Rose. I couldn’t really tell you what that means, but it sounded interesting.

How does being in a horror movie affect you? What did you take away from the film?

Scott: His own growth as a filmmaker; the DP pushed him to learn new ways of lighting and other techniques, and took note of the unrelenting will that Jerry Bruckheimer has to make things better.

McHale: To work with his best friend Scott and to see him work and be his element. Most of his scenes are with Eric, and he’s a true movie star, and “to look like him and be able to act…” makes me hate him. He also learned how awesome Jerry Bruckheimer’s hair is, because that needed to be said. Thank you Joel, and thank you for one of the most entertaining panels of WonderCon. If you can judge a movie by the back and forth between its cast…then Deliver Us From Evil will be a good one.