Why the X-Men matter

X-Men: Days of Future Past is out today, and if you’ve already seen it, congratulations, your life is a little better than mine. (My own viewing will wait for tomorrow morning, a short delay that feels almost interminable right now.) 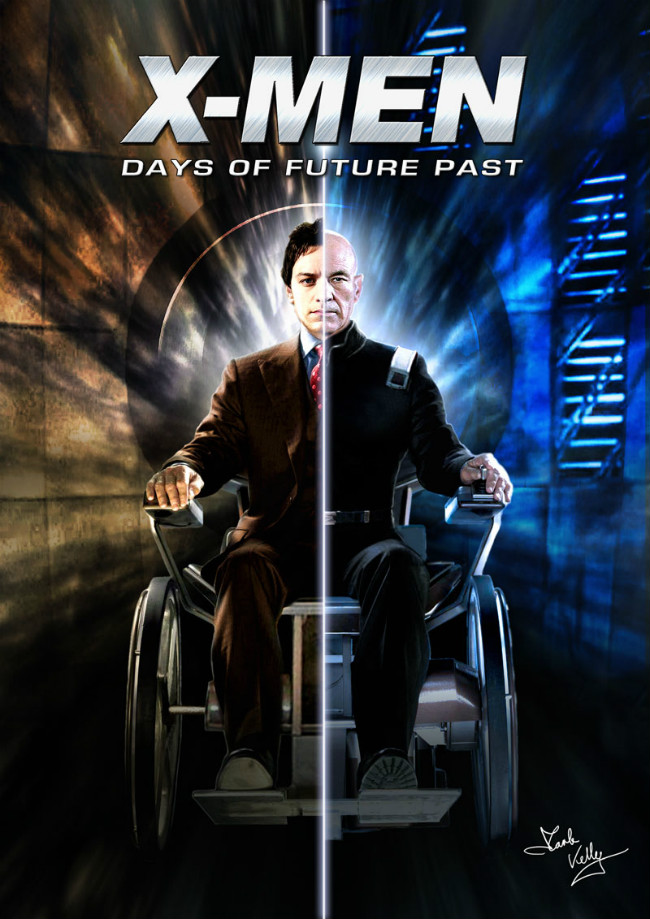 We’ve already thrown some X-coverage at you this week. Sira did a wonderful recap of why we X-nerds need this movie to be great. The original trilogy ended by adapting the greatest story in X-history into a movie so horrible it still staggers my belief. But even the X-films that are perfectly fine, like X-Men: First Class, still didn’t reach the pure unbridled greatness that I think of when I think of the X-Men. X2: X-Men United came the closest by far, but there’s still more potential than we’ve seen.

Andy did a freaking phenomenal retrospective of the first X-Men film and its personal impact for him, which included that it indirectly led to his and my long, unusual, and truly wonderful friendship. (Andy liked to use “long, unusual, and truly wonderful” to describe something else back in his Comic Castle days.) It certainly had its own impacts on me, which were similar in many ways, that I’ll discuss in more detail some day.

But for now, in these waning hours before I see what I desperately hope to be the greatest X-movie ever, I want to briefly discuss why I care so much about this group.

Like so many people my age, I fell for the X-Men as a kid watching X-Men: The Animated Series. It’s still my favorite cartoon ever to this day, and I have it on such a high pedestal of nostalgia that it probably always be. It was what first got me into comic books, though I wouldn’t become a regular buyer until I moved to a more metropolitan area with actual comic shops at the same time the first X-Men movie came out to further flare my interest.

Over the next several years, I read many X-related collections until I had checked out the majority of major events in their long history. But about five years ago, I got to go to another level when this collection put 40 years of X-comics on my computer. That’s when I went back and read the entire original run by writer Chris Claremont, which lasted a remarkable 17 years.

The original X-Men were never a commercial success. But in 1977, the group was resurrected from comics purgatory and soon given to Claremont as a gig that was far from glamorous (the series only even came out once every other month his first few years, because its demand was so relatively low). But Claremont proceeded to go on one the greatest, most important runs in comic book history, which I hope to more thoroughly Binge Project about someday.

For now, let’s keep it fairly basic. Claremont’s X-run changed the comics industry. There had been plenty of engaging stories in comics before he came on, and I’ve read many of them. But I’m not sure there had ever been a group quite like his X-Men. These were deeply flawed characters who thrived on a sort of pathos on a monthly basis, rather than the one-dimensional (though still entertaining) style of Stan Lee and Jack Kirby’s classic Fantastic Four run, for instance. His most popular character became Wolverine, a killer with no respect for authority. The X-Men became the first team that could thrive in gray areas, doing unpleasant things for greater good.

That’s not to say that it was all that dark by today’s standards. He had plenty of stories that didn’t work, especially in the later years of his run. But Claremont and his collaborators did pave the way for much since. His renaissance predated the more famous revolutionary work done by the likes of Frank Miller for Daredevil and Batman, or Alan Moore on Swamp Thing or Watchmen. But it was also more popular; after years of turning Uncanny X-Men into a hit, Claremont got a spin-off title, X-Men, in 1991. X-Men #1 sold more than 7 million copies, still a comic book record to this day. For perspective, the best-selling title today does around 100,000 copies.

Claremont’s run ended in a messy divorce with Marvel shortly after, and his quality had been a little lower by then anyway. But his peak years were a thing of true beauty. They came when working with two legendary artists: first Dave Cockrum, then John Byrne (then Cockrum again, briefly). With Cockrum, he did the original Phoenix Saga; with Byrne, he caught fire even more, delivering his best Magneto story, the Dark Phoenix Saga, and of course, relevant to today, Days of Future Past, which gave us two of the most iconic comic book covers in history: 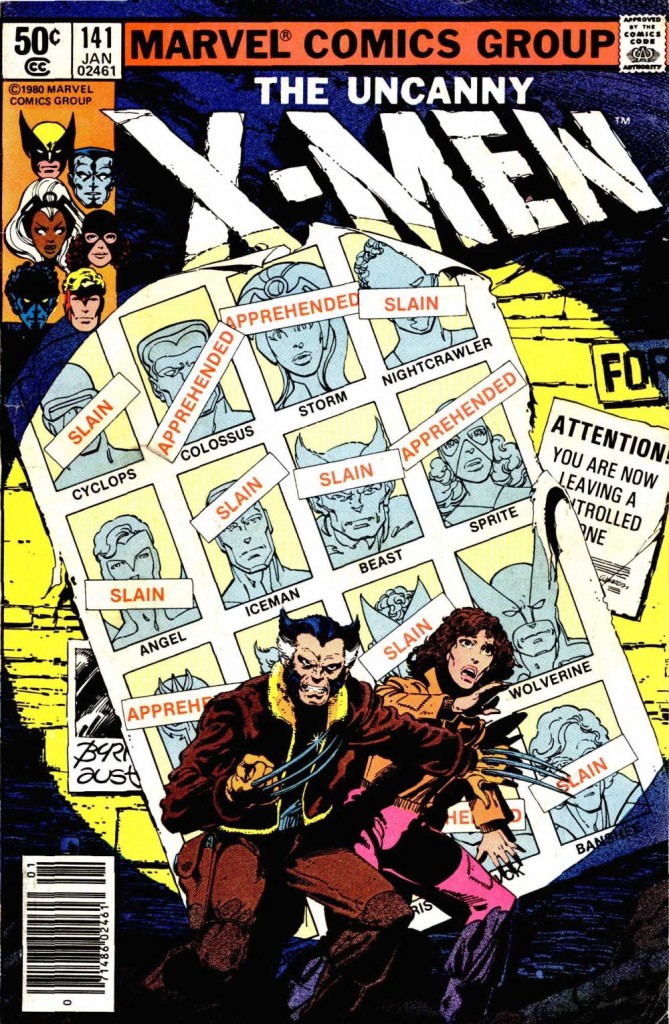 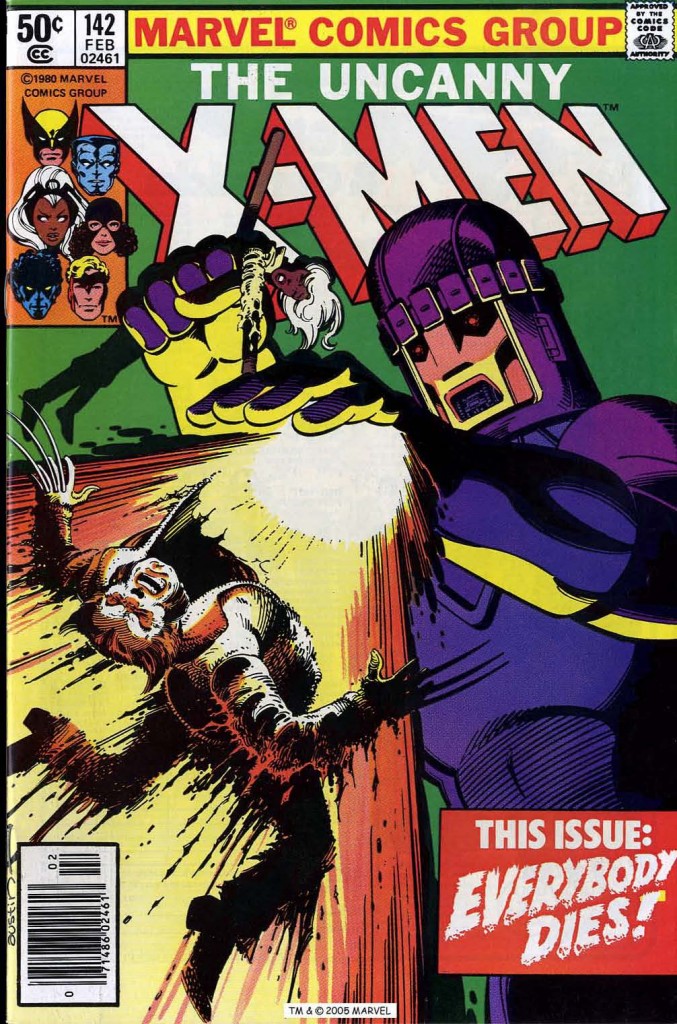 It was serialized adventure but with real stakes. Major characters could die, heroes could kill, the status quo could really change. In many ways, it influenced not only the future of comic book storytelling, but how other media also began to tell more genre fiction that had not just a hook, but a point. The Avengers may reign the box office right now, but the X-Men will always be my favorite team. They meant more to me at a young age, they did more for the industry and the genre generally, and they just kicked way more ass.

I’ve changed my “favorite X-Man” about 113 times in my life. Watching the original cartoon, it was Wolverine first, then when I realized he was everyone’s favorite, it was some rotation of Storm, Gambit, and Beast. When I got into comics in a big way and read some key Apocalypse stories, it became Angel/Archangel, the character I named myself after when I first met Andy on the Marvel boards (AvengingAngel, after Warren’s first moniker). Reading all of Claremont’s run, it became Nightcrawler.

Today, I’m not totally sure whom it would be, but it also matters less than it ever has to me. I adore this team as one big unit, an inseparable mass that has collectively inspired me more than any other fictional group. They’re a pantheon unto themselves.

The Dark Phoenix Saga ends with the Watcher telling us that Jean could have lived as a god, but chose to die as a human. The X-movies have done their fair share of dying now, with too many human failures dooming us to movies that haven’t reached their potential. It’s time to see these characters live on the big screen as the gods they are.