Why high school Spider-Man is great 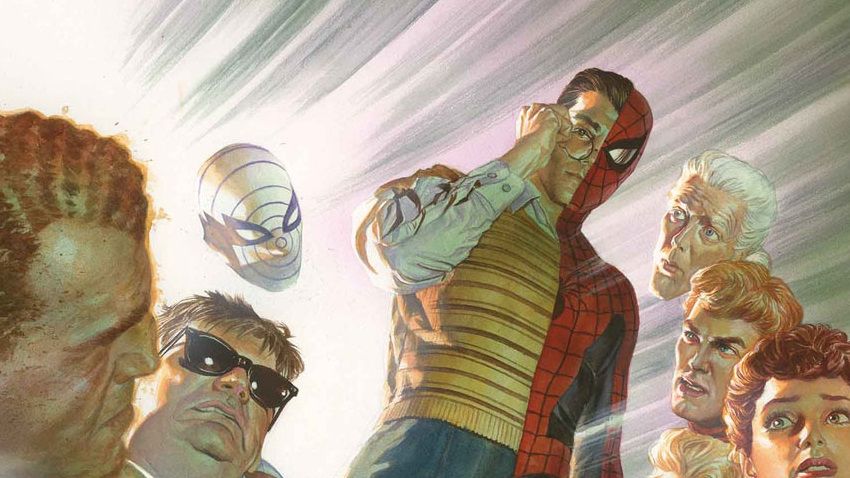 My good friend David posted a well-reasoned column “What’s so great about high school Spider-Man?” last week, which you should read here before reading this rebuttal because, well, that’s how these things work.

So go do that.

And for those of you who can’t follow instructions, I offer you a brief synopsis: David not only doesn’t like the somewhat-recent news that MARVEL and SONY are reportedly going with a 16-year-old version of Peter Parker, he also doesn’t understand the fascination with high-school era Pete (hopefully you gathered that by the title of his column).

Now that you’re ready to see the other side of the coin presented, I must preface my response by saying I agree almost entirely with David’s post.

I do! I promise. Hence the “almost,” but David makes a number of points I agree with. I, too, wanted Miles Morales. I also think a college-aged Pete would have been more believable in the existing MCU. I agree that three origin stories (all starting in high school) in roughly a decade is excessive.

And he’s right, you can accomplish all of the same life conflicts by placing him at a university instead of a high school… almost.

Which brings us back to his prevailing inquiry: “What’s so great about high school Spider-Man?”

I’ll begin answering that question by borrowing words from somebody else and taking them out of context (strong start!). Current Amazing Spider-Man scribe Dan Slott recently said in an interview that, “Whichever Spider-Man you care about is the real Spider-Man.”

Some people love Miles Morales. Some people love Miguel O’Hara. Some probably even love Spider-Ham. Surely a good number of fans love the committed Mr. and Mrs. Parker version, while others like to see Spidey sticking his Peter in Felicia Hardy. But what about the general movie-going public? The masses who will flock to see a Spider-Man who belongs in the MCU with the Avengers, who do they want in the costume?

The answer: teenage Spider-Man because, as David quoted me as saying in his post, that is when the character seems to be “at his most magical.”

For starters, in many people’s eyes, Peter Parker is the quintessential “teen superhero.”

Spider-Man has one of the three most recognizable origins in comic book history, alongside DC juggernauts Batman and Superman. But Spidey has something up his web shooters the other two don’t thanks to his station in life — relatability.

High school Peter has no money. Few friends. Homework. Pimples. Awkward changes to his body. He’s struggling to talk girls and a bullying victim. He has sticky white stuff shooting out of him (In the Ultimate Universe, at least). 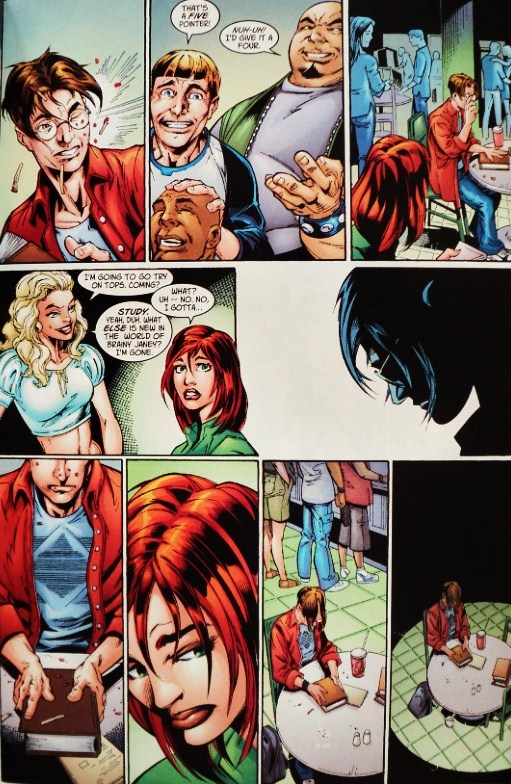 I realize David used this in his, too. But it helps prove my point!

Of all the great superhero origin stories, Peter most closely resembles the “everyman.”

Sure, you feel bad for the kid who just lost his planet and his parents and is forced to grow up in rural Kansas, but who can relate to Kal-El when he’s lifting tractors over his head in diapers? And, yeah, you feel for Bruce when his parents are gunned down but very few can relate to the billion-dollar trust fund he inherits. It’s also hard to put yourself in the shoes of  a guy who immerses himself into world-traveling, hyper-obsessive training over the better part of a decade to become the world’s greatest detective and the master of 127 martial arts.

Spider-Man is also the only one of the “Big Three” who becomes a superhero immediately after his tragic event. Spider-Man had to learn what he was doing on the fly (accidental spider pun!).

This tremendous origin has helped Spider-Man defy the odds by overcoming years of sub-par story lines, nearly irreparable continuity and a seriously bloated roster of Spider-Beings.

Surely this wouldn’t seem overwhelming to a newcomer, right?

He is dealing with all of these struggles that we all must endure when he gains his powers. His origin takes place smack dab in the middle of one of the most confusing and trying times we all go through in life.

As much as I agree with David’s sentiment that this will make it hard to believe he belongs with the way-older Avengers in the MCU, you could also argue that it adds an element of youth that is missing from the group.

That time in life is ripe for good stories. And one man saw this and updated it for the modern era, creating one of the most beloved versions of Spider-Man ever: Brian Michael Bendis.

Sure, there are a ton of Bendis haters out there for some of his controversial work on some of MARVEL’s big event comics (House of M, Avengers Disassembled, Age of Ultron, etc., as well as his recent polarizing run on the various X-Men titles) and some of the criticism is certainly earned. But Bendis knocked it out of the park(er) with Ultimate Spider-Man.

This scene kinda gets my point across in a nutshell: Peter tells MJ he’s Spider-Man. It’s powerful, emotional stuff.

When I was reading Ultimate Spider-Man in high school, I just felt it come to life off the pages. As a big comic fan myself, few runs have resonated with me in such a meaningful way.

Also, just know that if they do choose to go the Ultimate Spidey route, it offers subject material from which they can draw without treading through the exact same stuff as the first two series: Gwen Stacy is a troubled teen, the symbiotes aren’t of alien origin. Peter’s web shooters are organic, not mechanical. Spidey dies.

But why Miles and not Peter now? Because adult Peter lost its magic. So Bendis took the series back to what makes Spider-Man so special — high school. Young, relatable, malleable, fun.

Now just as a support for using the Ultimate Comics as inspiration, I’d like to point you to “The Avengers” film.

If you didn’t know, it closely resembles Mark Millar’s stellar run on The Ultimates. (But as David fairly pointed out to me in a recent conversation, the film benefitted greatly from Joss Whedon’s sense of humor.)

Look at the Wikipedia synopsis of Vol. 1 of The Ultimates: “General Nick Fury of S.H.I.E.L.D. establishes a strike force of government-sponsored metahumans which includes Captain America; scientist couple Henry and Janet Pym (Giant-Man and the Wasp); Bruce Banner (the Hulk) and Tony Stark (Iron Man). Together they are based at the S.H.I.E.L.D facility, the Triskelion. When Banner injects himself with the super-soldier serum and goes on a bloody rampage as the Hulk, he is eventually stopped by the other metahumans with the aid of Thor. The team then join forces with the mutants Quicksilver and Scarlet Witch and agents Hawkeye and Black Widow against the alien shape-shifters the Chitauri, who are defeated.”

Look at that roster: Captain America, Ant-Man, Wasp, Hulk, Iron Man, Thor, Black Widow, Hawkeye, Scarlet Witch and Quicksilver…. sound familiar? Well it should considering every one of them (I’m guessing Evangeline Lily will eventually be Wasp, but that’s a guess) is in the MCU.

Here are a few other tidbits the MCU borrowed from The Ultimates: a black Nick Fury, the Triskelion, S.H.I.E.L.D. establishing the Avengers by way of piecing together a metahuman strike force. Oh and stopping alien invaders named the Chitauri? Yep, check! 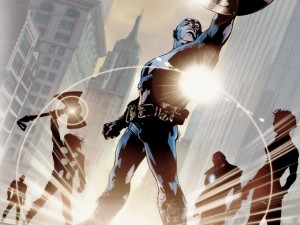 The Ultimate universe hasn’t exactly failed on the silver screen. They got to step out from under the weight of decades of main-universe continuity with battle-tested, modern source material to back them up.

Now that there is access to Spider-Man, I could definitely see MARVEL looking back toward the Ultimate universe to breath life back into the franchise in order to spin a different web, as it were, in the third re-telling of Peter’s origin in roughly a decade.

It’s not like the one they just abandoned was going anywhere special (except for maybe the rumored Aunt May spinoff! I wanted it to be “The Aunt-May-zing Spider-Man.”)

Ok, this is exceedingly long at this point. I promise I’m wrapping it up. As Uncle Ben once said, “With great word count, comes great unreadability.”

After the disaster that was Spider-Man 3 or the poorly-executed Amazing Spider-Man 2, this franchise needs a jolt and that will come from belonging to the MCU, not from making him older.

And if those aforementioned duds and a few decades of polarizing continuity decisions in the comics (second Clone Saga, Sins Past, One More Day, etc.) have taught us anything, maybe it’s that the question really is: “What’s so special about Spider-Man after high school?”