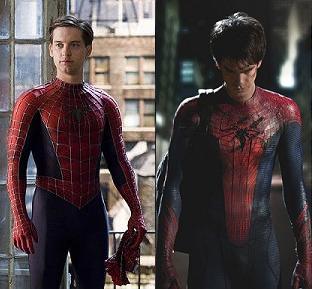 As even the most casual of nerds know well by now, we’re heading toward our third movie Spider-Man franchise in less than a decade. Even with my severe fatigue for reboots, I had to herald this as a good thing. Andrew Garfield’s Amazing Spider-Man series had its merits, but was underwhelming on the whole. And given Sony’s and Marvel’s comparative movie resumes of late, the idea of Marvel having any creative input on the future of movie Spidey is almost as good of news as the idea of Spidey himself joining the MCU.

But since the euphoria of the initial announcement, two details have put a significant damper on my excitement. (I’ll note here that technically everything is just a rumor for now, but such rumors are well-sourced enough to have credibility.) The first is that our third iteration of Spidey will again be Peter Parker. This is understandable, as Peter has more than 50 years of name recognition behind him, certainly a significant factor for a film franchise, albeit a far lamer excuse after the success of Guardians of the Galaxy. But I’m of the opinion that all they really need is the “Spider-Man” brand, regardless of who’s behind the mask. Therefore, I’ve been firmly in the camp that it’s time to turn to Miles Morales (though I would age him up a bit), the Ultimate Spider-Man of the past few years, who would help distinguish this third Spidey franchise from the first two. He would also, of course, bring some diversity to the very white MCU, which would be a welcome bonus. Not to mention that he sports one of my favorite Spider-suits, which would be another nice visual distinction for the new reboot: 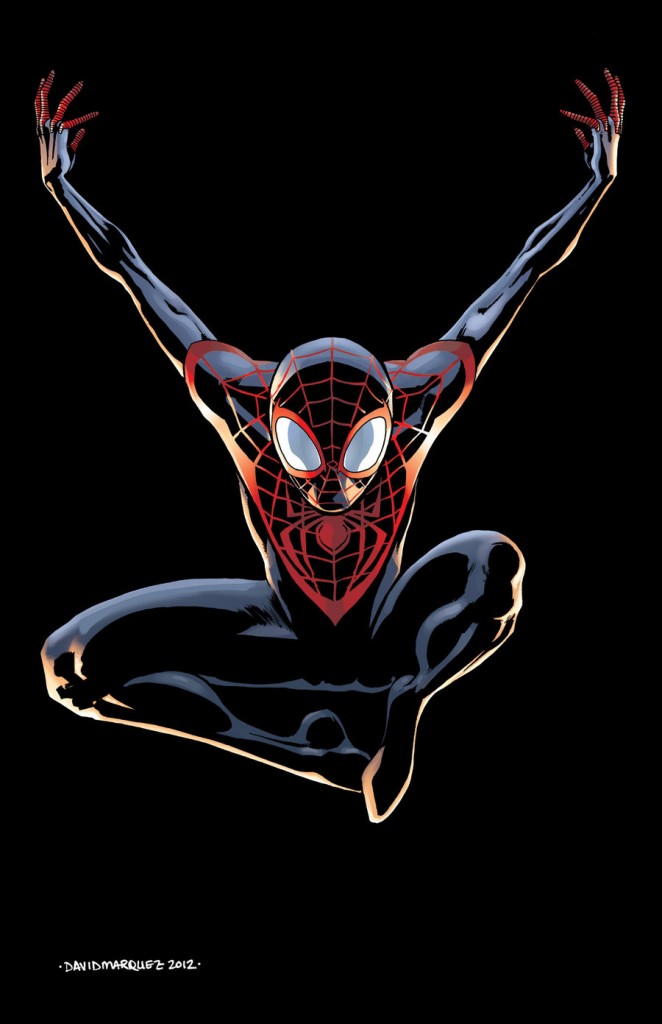 There’s nothing that says that the new Peter has to be white just because the comics versions have been — no reasonable person batted an eye(patch) at Samuel L. Jackson playing Nick Fury — but judging from the rumors on various actors Sony and Marvel are looking at, he probably will be. I feel like the studios are missing a golden opportunity to be different here, but again, I can at least understand the logic in sticking with Peter on the strength of his name recognition.

But the second misgiving I have is what I really want to talk about, because I just don’t even understand it. The studios have in mind their own way to distinguish this new Spider-Man from the past two: put him in high school. This one seems very sure to happen, as it’s been rumored more heavily (and from a wider variety of sources) than anything else about the reboot. Of course, it’s disingenuous for the studios to act like high school Peter is something we’ve never seen, considering Tobey Maguire’s character started his first movie there, and Andrew Garfield’s only got a little past graduation before the plug was pulled. But the idea seems to be that we’re going to see more of Peter in high school, with a bigger focus on those high school dynamics, than we have yet. This would probably even last multiple films, judging by the rumor that Sony and Marvel have considered at least one actor as young as 16; considering Peter graduated high school in Amazing Spider-Man 2 when Garfield was 30, casting an actual current high schooler would probably be young enough for them to get a full trilogy out of this high school idea.

But why oh why even go down that route? First, a young Spidey makes it more likely that we’re getting at least a little bit of origin story retelling, which no one needs or wants when we’re on the third version of the character in such a short time: we all already know the damn origin. But how do you skip it entirely when Spidey is a teenager instead of an adult? A guy in at least his 20s might be able to deal well enough with the bizarre feeling of having these super-powers that we can drop in on him as an established hero without feeling that something important is going untold. But can you really have a teenage Peter with these Spider powers and NOT show the origin? If he’s that young, is it even possible to drop in on him as an established hero? I honestly don’t think so; I think we’d have to see his adjustment period, like some version of what Spider-Man or Amazing Spider-Man showed, to be able to believe that this high schooler has reached a point where he can actually deal with the enormity of what’s happened to him.

But say I’m wrong about that, and we can have a high school Spider-Man without a third origin retelling. What I still don’t get is why. What is so special about the idea of Peter still being in high school that we need to see at least a full movie, and probably multiple movies, of it? One report suggested that this could be the studios’ way of going back to the character’s roots, which is technically true, but only if you limit the idea of Peter’s roots to literally just his very beginning. Because here’s what amazes me most of this whole discussion: The Amazing Spider-Man comic book began in 1963, and by 1965, had Peter in college (at the fictional Empire State University). So the mainstream version of Peter Parker hasn’t been a high school student in 50 years. So these roots of Peter’s make up all of two years of his 52-year history. Almost every great Spidey story that helped make the character such a cultural icon occurred with Peter not in high school.

So the real reason that taking Pete back to school is being considered is probably because of some combination of a) the trendiness of dystopian young adult fiction having kids fight/kill each other, and b) the Ultimate Spider-Man run by Brian Michael Bendis and Mark Bagley, an undeniably popular retelling of Spidey’s story beginning in 2000 and probably peaking within its first few years. Let’s all agree that the market on a) is becoming oversaturated, and move on to b). The USM story followed young Peter in high school, though it’s worth noting that even that re-imagining eventually felt compelled to advance him beyond that. I should disclose, to be fair, that I’ve spent the past 15 years simply not understanding the popularity of early Ultimate Spider-Man. At all. I’ve read much of it, and the pace nearly put me to sleep; Bendis took something like seven issues to basically retell the single issue of Amazing Fantasy #15. Sure, there was more depth than the rushed origin style of the 1960s, but it took forever to get anywhere — a style that doesn’t necessarily bother me, but the journey has to be more interesting than that one was to me personally. Still, I have to concede that plenty of people felt otherwise. The series sold well for years, and had an impact on the way the character’s early years are now viewed; my friend Ryan said when discussing the news that movie Spidey would be back in high school: “I’ve just always felt that is the time period where Spidey is at his most magical.” 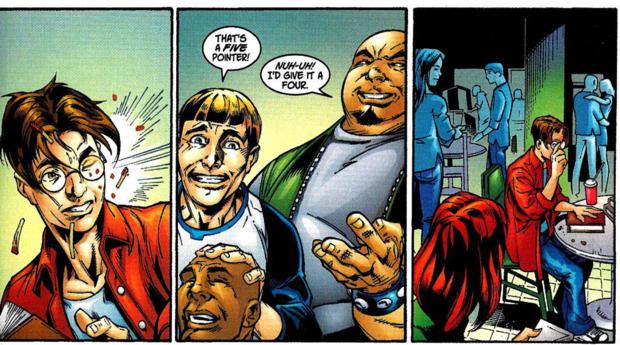 Since I’m anti-high school Spider-Man, I’d like to examine that statement and make a counter-proposal. What makes high school Spidey “magical”? Well, Peter Parker at his best is usually a nerd (in a good way!), so leaving him in school gives us a chance to see that dynamic at play. It also gives him another thing to juggle — schoolwork — which is important, since part of the character’s core is that he struggles to balance being a superhero with the other pressures in his life (school, work, family, girls). But my counter is this: doesn’t everything special about Peter in high school work even better with Peter in college?

Peter in college is still a nerd. Peter in college still has school to juggle, and it should be even more demanding. But Peter in college makes more sense for every other narrative. Let’s say the new version of Spidey uses the ASM plot point of Peter developing and/or continuing to make his own web shooters (which was also the original comic book version, though the Raimi/Maguire films made the webbing a natural part of his powers instead). Even if Peter is able to use/steal someone else’s formula, who’s more likely to understand it well enough to duplicate the process and maintain his supply: a high school student or a college student? If you want to involve Peter with any of the numerous scientists in his ally and rogue galleries, such as Norman Osborn, Curt Connors, or Otto Octavius, who is more likely to attract their attention, a promising high school student or a proven college one? Sure, Peter has always been smart, but he’s never been ranked among Marvel’s super-geniuses. Usually, his brains aren’t really even used much once the suit is on.

Then let’s consider Spidey’s role in the greater MCU. We already know he’ll have some involvement in Captain America: Civil War, and it’s a safe bet that it won’t stop there; Spider-Man eventually being in the Avengers became inevitable as soon as the Sony/Marvel deal became official. Can you really see a high schooler standing next to Iron Man and Thor and still looking like a credible superhero? Hell, can you really see that group even allowing a high schooler to play hero? This is why any live-action Robin we might see in a future Batman film isn’t going to be a kid; it’ll be a young adult.

And I think that’s a big part of why I have a problem with this. Superhero movie audiences are quite willing to suspend a lot of disbelief. I’m willing to let myself accept that a serum can make a man grow six inches and put on 100 pounds of muscle in a couple minutes; I’m willing to accept that a radioactive spider can give a guy crazy spider powers. But that’s just (very) fake science; the people still need to then act like believable people for the story to work. It’s hard to have a hero whose story stays in high school and is still filled with believable people, because believable people aren’t going to be ok with that. And as I’ve tried to show, being in high school gives nothing that making Peter a few years older and in college doesn’t still accomplish.

So to restate the title of this post: What’s so great about high school Spider-Man? No, I’m really asking. Please explain this to me.