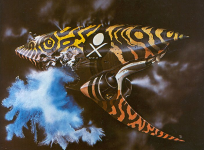 Most of us have heard of DUNE, if not read Frank Herbert’s philosophical masterpiece. Whether we’ve seen David Lynch’s nutty film, we’re at least aware that Sting and Patrick Stewart both starred in the disaster, and that spice (a hallucinogenic drug) plays an enormous role in the plot. You might … Get hard