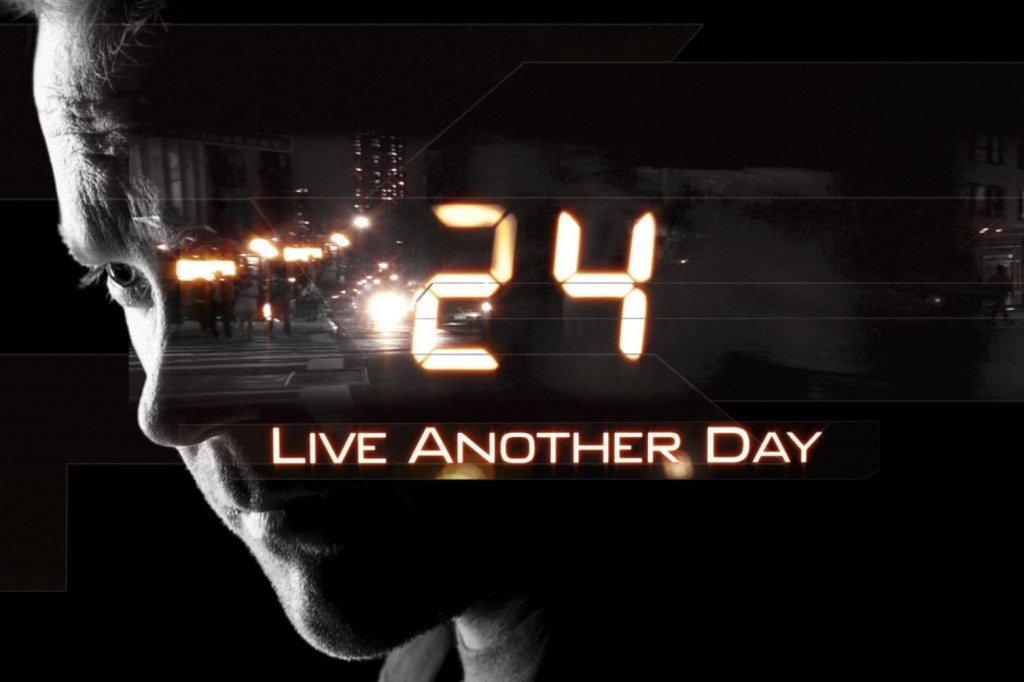 Day 1 of San Diego is about to begin. I’ll be liveblogging for as long as sketchy WIFI and fickle battery life persists. Lucky you.

First up is the first and last 24 panel. I haven’t watched the show since maybe season 3, and I’ve probably seen less than a full day in Jack Bauer’s life in total. That makes me the perfect person to regale you with dirty deets on the last season for the FOX show that apparently people other than my Aunt and Uncle still care about. There will be SPOILERS, but you should know that, fateful reader(s).

Prediction: A 24 movie will be pontificated about ad nauseum. I’d say there’s a 64% chance for an announcement during the panel.

Lessons learned from my neighbor who’s been on the show from the start (the poor lass): Apparently Live Another Day is already over, and apparently it was “pretty good,” and like Bourne Identity. A little late to the game on the Bourne copycats. I’m learning so much.

Kiefer Sutherland to the stage. Gets a rousing round of applause. Also doesn’t kill anyone, which is impressive considering the intro video.

Apparently Kiefer worked with Jon Cassar for 9 seasons of 24, and has never seen Jon more nervous for this panel, according to Mr. Sutherland.

Shooting in London was difficult; the rules are different. Needed 6 weeks to have a gun on set. Getting weapons is a lot harder in the UK. This led to more creative ways to “do stuff”/kill people. Also very odd to shoot with a different group of people, though they were talented. London was a “fantastic experience.” Texture and historical significance was “unique and special.”

Cops can’t stop people from walking anywhere, so hundreds of people would crowd the set. Up to three thousand people watching during metro in/out scenes, and funny enough, listened to directions from the crew, unlike Americans.

During a very emotional scene between Jack and Chloe, they were forced to do it in front of 2,000 people in a park. Mary Lynne (Chloe) was terrified, and didn’t think she could do it. But she knocked it out of the park and cried, because of all the eyes.

Sutherland: “This character has been the greatest gift of my career.”

“We’ll never say we made a perfect season…” but very proud of what we did over 8 seasons, and were terrified to damage that by opening it up again. Kiefer was a complete mess about it, panicked. Was worried about not serving the character and franchise justice.

Went back and watched the very first season and very first episode. There was so much hope. With everything that he’s lost, he’s lost patience. “Nothing in his immediate future that he’s fighting for.”

Justified the tattoos on his arms, because he was tired of covering them up. Created bullshit excuse for it.

The end of the show “was whatever we could make it.” Had a lot of freedom to end the finale. “Copped out” because it’s hard to let it go, and hard to end it. “It was difficult.” This all mattered to them, and it’s clear that Kiefer means it. Thanks audience for their gracious and kind response to the end.

Halo around Chloe; can’t kill her. They’d rather kill off Jack than Chloe, Kiefer suggests.

Met Kim Raver five minutes before they had to make out, push her against the wall and undo her blouse in their first scene together. He also met her husband right before it. Yay acting!

Working with Bill Devane: “he’s crazy.” He apparently just wants to be playing polo. RE: London: “I can’t understand why they don’t feed you better.” He was fantastic/miserable traveler, complained about lack of channels, couldn’t sleep, etc.

Apparently Devane’s wardrobe mannerisms is all him. Cassar commands us to look out for that when we get the Blu-Ray. He either assumes we’re all getting it (wrong), or they’re giving them away (too good).

RE: preparation. It apparently when it’s going well, Kiefer gets nervous and doesn’t read the scripts until the day before.

Kiefer admits that there were good TV shows before 24, name-dropping ER and The Sopranos. Was worried about playing a character for a long period of time; but loves it, because it’s the most rewarding acting opportunities you can imagine, because of the evolution and growth for his character.

Apparently throwing the “Red Queen” (wrong; Michelle Fairley/Catelyn Stark) from Game of Thrones was not the original idea. It was written as him coming through the window and killing her, the episode was too long. Kiefer wanted to have a scene with her, it was his ego. She’s the “strongest, shortest” person I ever met, “unbelievably strong.” By the time I actually chucked her out the window, “I was quite happy.”

Chopping Benjamin Bratt’s hand off wasn’t in the script either. Took the opportunity given to him, which was often the case on 24. A lot of it is born that day, and comes organically, and had freedom to do it.

How much of Kiefer is in Jack and vice versa? “Oh, very different…just take a look at my record.” Jokingly says he’s the guy he wanted to grow up to be. Sutherland has a strong sense of right and wrong, whether he follows it or not, and shares that with Jack, who lives by it, a creed he respects about the character more than anything.

During first season, Kiefer went to wrong location and ran out of gas to the second location (he’s never late and never missed a day of work except for this day). Got out, wearing a suit from Jay Leno the night before, running to get gas. Traffic not moving, guy yelled “Jack Bauer!” They thought he was shooting a scene. On the way back, he ran back to his car with a gas can, and the same guy yelled, “Jack Bauer’s a loser!”

Another story: Old lady with groceries on Olympic in LA. Kiefer sees her, she gets accosted by two men, and he gets out of his car and starts hitting the boys. Then he realizes they’re shooting a student film. The old lady was an 18 year old kid from USC. Awesome.

Who would you dress up as Comic-Con? “Stormtrooper,” no way of knowing who he was, and body defined.

At family dinners, does Kiefer and Donald argue about what characters are more badass? Kiefer loved the question, but actually doesn’t talk to his Dad about work. Recently did a movie with Donald, directed by Cassar (a western). Kiefer admits that “he could kick his ass.”

RE: Metal Gear Solid 5 and similarities/differences between working on a video game and TV/movie: wildly different process, except  creating a character is the same. Believes films/video games will come together, and the technology will progress to that point.

Saw Jack as a reluctant action hero at first, but losing his wife, and his family as the show progresses, evolved the character to where he’s got nothing, and he’s just angry. “Evolution of the character is based on loss.”

Don’t consider political ramifications outside of the context of our show. “It’s a show. We’re not advocating torture…anything.” Made 24 six months before 911. Made him someone who fought terrorists, because that’s a job where he could work 24 hours on end. Writers would imagine worst scenario, and then the scenario would come true. Stopped predicting and took from the newspaper; like drone warfare in season 9. Political backdrop is important to storytelling.

What happened to the President after the finale? “I suspect he’s mourning the loss of his daughter and in our heads, resigned, given into his illness, etc. etc.” This question was asked by the Verge, to which Kiefer admitted to being in Comic-Con.

Favorite weapon to use? Kiefer answered immediately: 6th hour, a 3 .37. I know nothing about guns, so that’s probably not even typed out correctly. One of the few fake guns that wouldn’t misfire. Yvonne Strohovski caught on while filming season 9.

What’s more important: creating a story that’s suspenseful or one that you want to watch it over and over? Kiefer, personally believes in the former, though he’s not a writer and not involved in that process.

Kiefer gets asked to do a Jack Bauer “Dammit,” and he kills it. Twice.

Who would you want to be your costar if you did another 24? Rave about the actors they got this last season. Hard to say because so many great actors, but mentions Gene Hackman as his dream fantasy to work with.

Movie question finally brought up. They’re still talking about the movie, it’s out there. Jon Cassar can’t say anything about directing it, but he’d love to, and Kiefer would love to do it. It’ll happen.