Game of Thrones: Season 5 Power Rankings at the halfway point 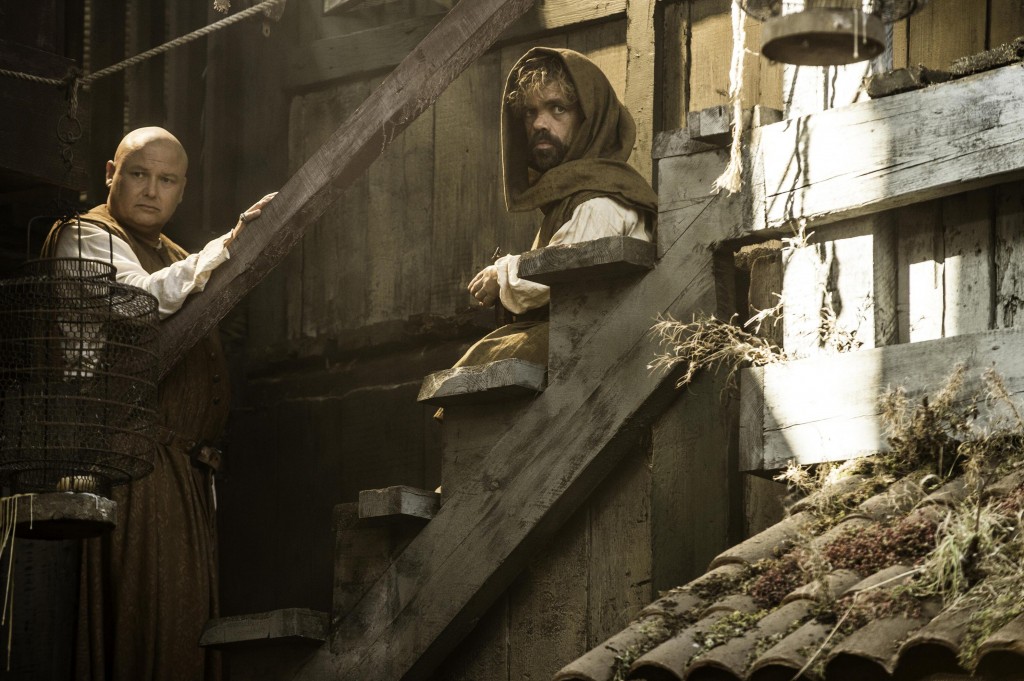 After last night, we’re halfway through Season 5 of the best show on earth, HBO’s Game of Thrones. As always on GoT, we’ve seen intrigue, death, and gratuitous nudity as  we’ve caught up with all our favorites. But which characters have shone the brightest so far in S5? Let’s take a look with some Power Rankings! Note: these rankings only reflect these characters in Season 5, not the show as a whole. Also, spoilers.

Arya has finally gotten to begin her Faceless Man training at the House of Black and White in Braavos; in the process, she’s reunited with old friend Jaqen H’ghar. But while Arya has had to get by on sweeping floors, throwing away belongings, and cleaning dead guys, Jaqen gets to try on any face he chooses and say a bunch of cool-sounding shit.

Maester Aemon may be blind and as old as snow itself, but you get the sense that he’s probably the wisest person left alive. That wisdom is too far away and near death to be of any use to his only (known) living relative, Daenerys (who could really use him), but he still serves the Night’s Watch well, casting the winning vote for Jon as Lord Commander, then urging him to get his shit together and lead.

Let’s get the old guys out of the way. Whereas Maester Aemon relies on aged wisdom, Ser Barristan is still a physical badass. Formerly the greatest knight in the world, Selmy is a shadow of his former self — which still makes him one of the more formidable fighters in the land. His and Grey Worm’s fight with the Sons of the Harpy might be the high point of the season thus far, and Ser Barristan’s heroic death is another great indicator of how much we’re departing from the books.

Let’s give another hand to that great brawl with the Sons of the Harpy. So why does Grey Worm get a slight edge over Ser Barristan? One, he’s still alive, which is probably nice for him. But mostly because he parlayed his near-death experience into a great pick-up line for Missandei. Just because he’s been castrated doesn’t change that Grey Worm has mad game.

Of the traditional fan mega-favorites (namely, Tyrion, Dany, and Arya), Tyrion has had the most opportunity to shine so far at the halfway point. He’s been drunk or captive pretty much every moment he’s been on screen thus far, but Peter Dinklage has, as always, played him brilliantly. This season, he’s made the most out of those relatively unglamorous moments by using them as an opportunity to show how affected Tyrion remains by the events of the Season 4 finale; particularly effective was his playing off Varys and his bittersweet realization that he wasn’t ready for another woman. I expect Tyrion to shoot up to his usual spot as a top-three character by season’s end, especially if he gets to Mereen soon and can put his brilliant mind to a prominent use again for the first time since Season 3.

We’re starting to see Sansa come into her own little by little, now spurred on by Littlefinger’s admonishment to stop being a “bystander to tragedy” and avenge her family. Seeing Sansa take those steps toward independence and hopefully even vengeance is one of the most intriguing parts of the season thus far. How she fares in the remaining five episodes among a group of brutal and dangerous characters feels like the most important turning point yet for the character.

The kind and literate princess is scarred by greyscale, cursed with the worst mother in the seven kingdoms, but has become one of the most delightfully charming characters on the show. She patiently teaches Gilly to read, endures her mother’s dislike, and participates in the sweetest moment of the season with her father, Stannis (above). And she still has her excellent rapport with Ser Davos. If the series ends with Shireen on the Iron Throne, Westeros would be all the better for it.

Jaime Lannister may be the ostensible star of the excursion to Dorne as he and Bronn march toward Princess Myrcella and an inevitable showdown with the Sand Snakes, but Bronn is clearly stealing the show. That comes as no surprise, since Bronn has always stolen the show, but I’m savoring it even more this season since I have a bad feeling the show might kill him off before the finale. The put-upon exasperation with which Bronn reluctantly does all the rowing, fighting, and digging for the one-handed Jaime is a comedic highlight of the season.

He’s only been in two scenes so far, but don’t we kind of have to envy Drogon right now? His brothers are locked up in a cavern, chained from flying and having to resort to whatever scraps (or nobles) Daenerys lets them have. His surrogate mother is struggling to maintain her authority in a powder keg. Every character on both sides of the Narrow Sea is being forced to contend with various struggles, frustrations, and setbacks. But not Drogon. He checks in on Dany, but doesn’t have to become a tame part of her world. The next time we see him, he’s soaring above his ancestral homeland of Valyria, the last dragon standing. While everyone else is in chains either literal or figurative, Drogon alone is free, man.

Stannis has been a big player since the start of Season 2, but he’s never been as human as he has been this season. He’s still the same iron-willed serious warrior that he’s always been, as Mance Rayder can personally attest to. But we’ve finally gotten to see him as more than just an intractably stubborn general this season. His moment with Shireen, embedded with her entry at #4, is probably the best parenting we’ve seen in this show. But what really put him over the top?

So there you have the first edition of the S5 GoT Power Rankings. We’re halfway there, which in the parlance of Game of Thrones, means most of the best of the season is still yet to come. Plenty of time for various major players to completely rework these rankings for the final standings. Who will come out on top? Which major characters will make a play for the top, and which minor players (Ser Pounce?!) will shock us all? Feel free to share your rankings thus far and/or predictions for the final tally.