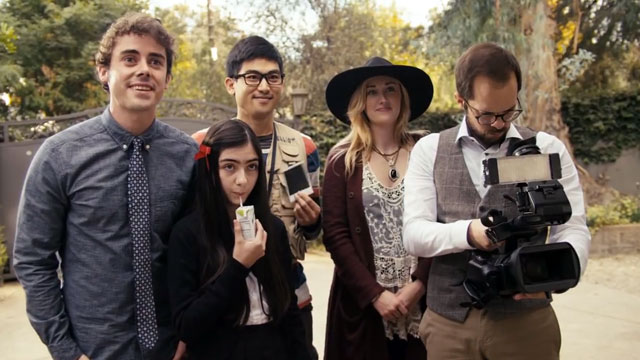 While it’s never been easier to create and upload your own web series, videos or what have you, this is somewhat of a double-edged sword. The online TV phenomenon has opened up the arena to infinite digital channels and outlets for original content, from the big guns like Hulu, Netflix and Funny Or Die to your neighbor’s YouTube channel. It’s wonderful and overwhelming, nigh impossible to differentiate yourself from the crowd.

Felicia Day has been a part of that revolution from the start, creating and starring in THE GUILD, which stunningly debuted on YouTube in 2007. She was also the wonderful Penny in Joss Whedon’s DR. HORRIBLE’S SING-ALONG BLOG in 2008, an online venture that transformed the way we consume TV forever. She’s also one of the figureheads, along with Wil Wheaton, of Geek & Sundry, a digital entertainment production company and website created to shepherd content tailor made for nerds like us.

SPOOKED is its newest confection, a joint venture between Geek & Sundry and X-MEN: DAYS OF FUTURE PAST’s Bryan Singer’s BAD HAT HARRY. Series One is comprised of four episodes written by Felicia Day and Michael Gene Conti, directed by Richard Martin. The show premieres in two days, on June 4th, launching on Hulu and Youtube at 10 AM PT.

In case you couldn’t surmise from the title, SPOOKED is a paranormal comedy, and spoof of the myriad of supernatural investigation TV shows on SyFy and the like. It’s packed with talent in front of and behind the camera, but unfortunately, it’s hardly treading new ground. Over the first two episodes, the PIT encounter face a routine poltergeist haunting and an alien abduction. There’s tin foil hats, crop signals, a seance, and white noise on the TV. Thankfully the cast has an easy chemistry, with a pleasant back and forth, at an often breakneck pace, that helps alleviate the been there, done that vibe. 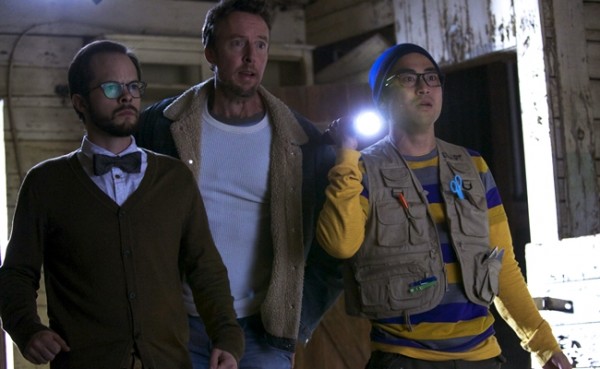 The show follows the foibles of the aptly named Paranormal Investigation Team (gifted the unfortunate moniker of PIT), led by Connor (CAPTURED’s Julian Curtis). Early on, we’re introduced to his team: Elliot (GREEK’s Derek Mio) is an accomplished ghost hunter, apparently. Morgan (Ashley Johnson of THE AVENGERS and MUCH ADO ABOUT NOTHING) is the Wiccan occult specialist, with knowledge of voodoo, the Tarot, etc. Lindsey (EUREKA’s Neil Grayston) is the skeptic, who’s funding the whole operation because he wants to reap the profits from the operations if wrong. Piper (Shyloh Oostwald of IN TIME) is Connor’s pale, don’t-say-creepy younger sister, who has become mute following their parent’s deaths, only opening up to the dead. Connor’s hoping that the work will help his sister heal, refusing to pump her full of med’s or send her to a mental hospital, while Lindsey wants money, and Elliot wants Morgan and to exploit the footage on the internet, as ghost hunters are wont to do.

The best part of SPOOKED is the brother-sister relationship between Connor and Piper, because it’s adorable. Connor may be an idiot with women (he’s called his ex 24 times without getting a response, which is as painful to watch as it sounds), but he’s really good with his sister, and his heart is in the right place, and therefore so is SPOOKED.

Unfortunately, Elliot threatens to remove the goodwill. He’s the kind of oblivious and annoying guy who will hold up a Ouija board and yell, “Yolo, son.” Just because he’s clearly a nerd, doesn’t mean he can’t be a douche. I do love how most of his pickup lines toward Morgan make him come off like a serial killer, but because he’s so over the top it’s hard to ever feel for him when Connor and Morgan inevitably “break the bro code.” 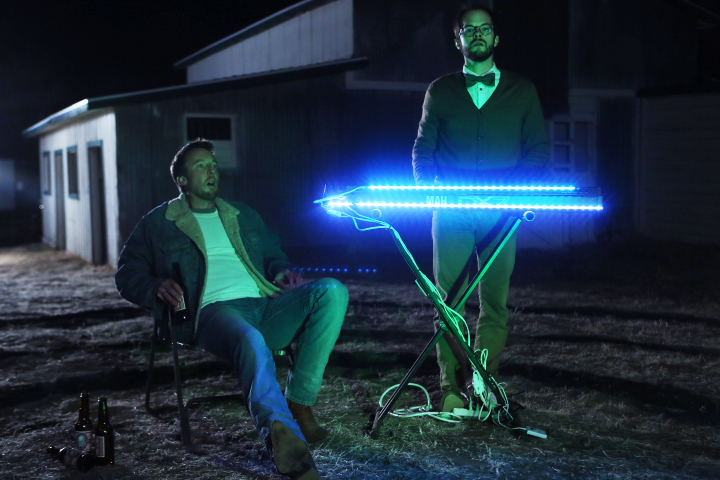 Like Elliot, oftentimes it felt like SPOOKED was trying too hard. When Connor and company arrive at a cabin in the desert, its redneck central. The family actually go by the following names: Me-Maw, Ba-Paw, Beau and their dog Elvis. Beau refers to Me-Maw as a “cooped up calico” who “wants to make a litter.” She also makes opossum stew, because of course she does.

The big draw for me, and I venture to say others, will be the parade of guest stars. In the pilot, Dichen Lachman (DOLLHOUSE, BEING HUMAN) guests as one half of a lesbian couple haunted by her dead father. Episode 3 promises Tom Lenk (MUCH ADO ABOUT NOTHING, BUFFY THE VAMPIRE SLAYER). All hail Andrew.

As one might expect, there are plenty of pop culture references (Alien, Close Encounters of the Third Kind, Signs, Top Gun, Poltergeist, etc.), some cleverer than others. I loved when Alison Haislip’s character asks the team, “Which one of you is the clairvoyant?”

SPOOKED has a talented cast (sure to delight Whedon fans), and established a functional dynamic within the opening minutes. I suspect the show will improve over time, and no matter how familiar the premise, we watch TV for characters, and SPOOKED’s ensemble has potential. But with the crowded slate of online web series ever expanding, and actual TV jam-packed with greatness year round, SPOOKED may get lost in the shuffle. It doesn’t deserve to, but I wouldn’t begrudge those for waiting to add SPOOKED to their binge viewing list.

SPOOKED premieres on Hulu and YouTube on Wednesday June 4th at 10am PT/ 1pm ET.