Cartoons played a major role in my introduction to nerddom. When I was a kid, I lived in small towns without comic book shops, and the main superhero movie fare was Joel Schumacher’s Batman movies. So my love of superheroes was driven largely by what was on TV on Saturday mornings (and subsequent years of reruns). Four cartoons particularly influenced young David: X-Men, Spider-Man, Batman: The Animated Series, and Superman: The Animated Series.

By the time DC launched its Justice League cartoon, however, I was far more into actual comic books, and despite seeing several episodes, mostly let the series fall by the wayside. Subsequent well-regarded cartoons, from Justice League Unlimited to Avengers: Earth’s Mightiest Heroes, passed me by completely. But recently, I began rectifying at least one major oversight by binging the brilliant but painfully short-lived Young Justice. This post covers the first of the show’s two seasons. 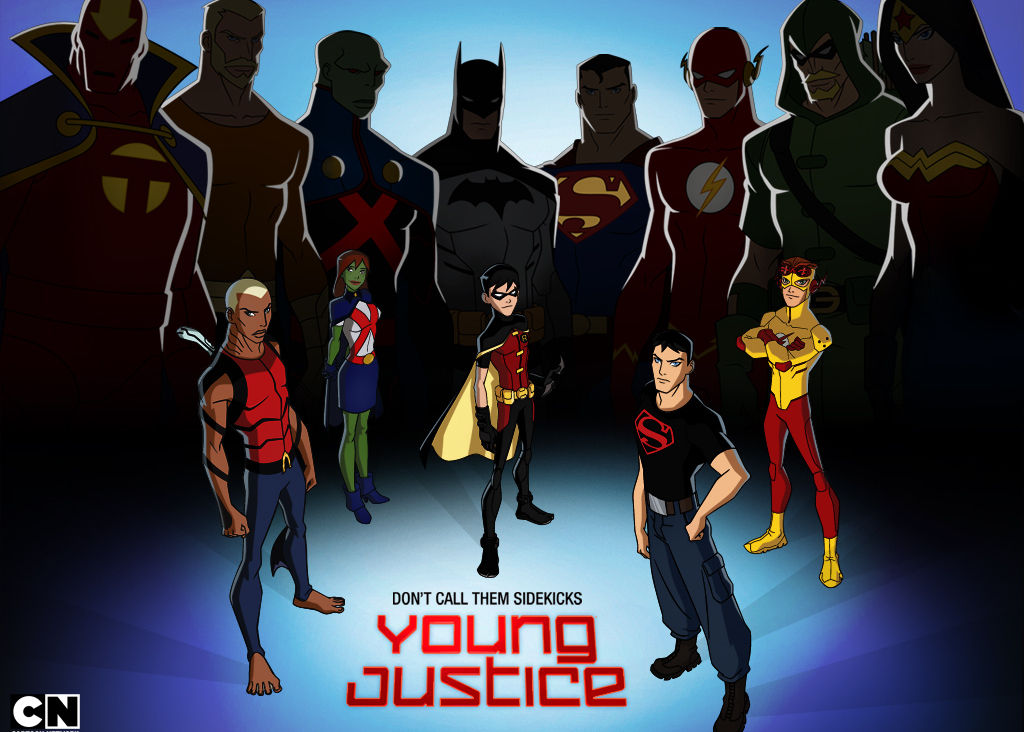 DC has a long tradition of sidekicks, and a tradition nearly as long of those sidekicks teaming up, starting in the 1960s with the first iteration of Teen Titans. But it was the 1980s relaunch of the concept that really took off, with Marv Wolfman and George Perez’s The New Teen Titans going down as one of the best comics of its decade, even all-time. But as time marched on, those sidekicks grew up and an even younger group began taking their place. The result was the group and series Young Justice, a wildly fun ride in the late 1990s and early 2000s written mostly by my eternal writer-crush, Peter David (or PAD to his fans).

The TV show is not a true adaptation of PAD’s series. The team lineup is a mix of old Teen Titans, presented to still be young enough for this group, some members of the Young Justice comic, and new creations. A young Robin and Kid Flash, the Dick Grayson and Wally West versions, respectively, rep the old Titans group, along with a new version of Aqualad. Superboy joins from the Young Justice comic ranks, along with a new version of Arrowette, here called Artemis with a more interesting backstory. Miss Martian, a more recent comics creation, rounds out the team lineup for most of Season 1, with Speedy/Red Arrow (Roy Harper) playing an important recurring role despite only briefly being an actual team member. Later additions are an aged-down Zatanna and a brief role by Rocket, plus numerous guest roles from major DC characters.

Robin was often the highlight of the 1980s Teen Titans, just as his successor Tim Drake was of PAD’s Young Justice. Here he’s the team’s youngest member (well, kinda), and plays a different role than either of those series, where Robin usually led the teams.  This Robin still has many of the classic trappings of any Batman-trained sidekick, with martial prowess and tactical insight. But he doesn’t yet have the full force of gravitas and maturity, so he willingly cedes team leader to Aqualad. Aqualad was an original 1960s Titan, but that version was Garth. The show uses Aqualad as an opportunity to create some more diversity of skin color by creating this new version: Kaldur. A strong episode, “Downtime,” features Kaldur visiting Atlantis, where we see that in this timeline, Garth and Kaldur together once saved Aquaman, but it was Kaldur who seized that opportunity to become Aqualad, while Garth stayed behind to study the mystic arts. It would have been cool to see Garth emerge later as Tempest, but for Season 1, we’re in great shape with Kaldur, who’s a truly excellent creation. His powers look badass in battle, and he becomes the cool, calm leader that the team really thrives on. 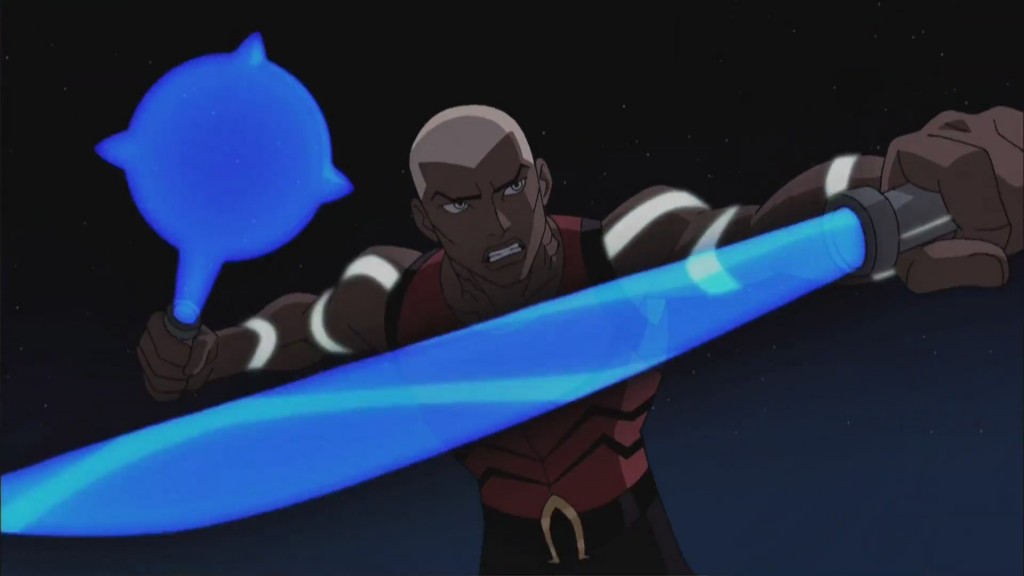 Wally’s immaturity is played up a little too heavily early on in the season, but he still gets his own moments to shine; “Coldhearted” showed just how formidable this version of Kid Flash can be, even when he spends a lot of time on the wrong side of too-silly. But it’s the trio of Miss Martian, Superboy, and Artemis where the show really thrives. Miss Martian was easily my least favorite character early on, and I still cringe every time she says her brutally annoying catchphrase (“Hello Megan!”). But even that starts to pay off in “Image,” when we learn the secrets she’s been covering up. Artemis and Superboy have their own secret origins that they hide for most of the season, letting the tension build until everything finally explodes in the final two episodes. There was a very organized season-long plan that built up slowly but steadily and informed the storytelling all along as we moved toward a killer endgame.

The animation itself kicks ass, with Brandon Vietti heading the art team. DC Animation continues to be influenced by Bruce Timm’s 1990s sleakness, but Young Justice continues Justice League‘s effort to round out those edges to slightly less exaggerated style. The characters look great, and the action scenes are well-choreographed and really shine.

I think there were two main things that made me love this season. One was how interconnected it always felt with the rest of the DC Universe. As much as I loved those four cartoons from the opening paragraph, the lead characters there were almost entirely within their own world. There were exceptions, but outside guest stars or crossovers never got to be the norm. Young Justice has members of the Justice League as essentially part of their extended cast. Batman frequently gives missions; Red Tornado, Captain Marvel, and Black Canary help train the team; Superman stops by for brief awkward interactions. Young Justice is never banished to its own little corner of the DCU, but rather plays frequently in the greater sandbox. This also helps the show access a great Rogues’ Gallery that provides a lot of fun and big stakes.

Second, the show is unafraid to go dark. There’s a decent amount of silliness in watching these kids play hero. And there are subplots I could do without, such as watching them try to blend into school, that seem placed there as if checking off a box to make sure the show appealed to kids. But it’s also damn violent and never shies away from the life-or-death stakes of heroism. There are kids shows that feel the need to dumb down to kids, and in doing so, become stupid or nonsensical. But when that quartet of shows from my intro was at its best, they dealt with some fairly mature stuff and trusted that I, a kid, could handle it. And it turned out I could, and I loved those shows all the more for it. Young Justice has a lot of that in it; the stark bleakness of “Failsafe” is heavy, dark stuff. The show might remind you sometimes that it is indeed an ostensible kids’ show (especially the first half of the season), but it never forgets that kids have brains, too.

The end result is a wonderfully fun season that picks up steam as it moves along, with a damn good final 10 episodes or so that launches the show into some rarefied cartoon superhero air and leaves you anxious for Season 2.